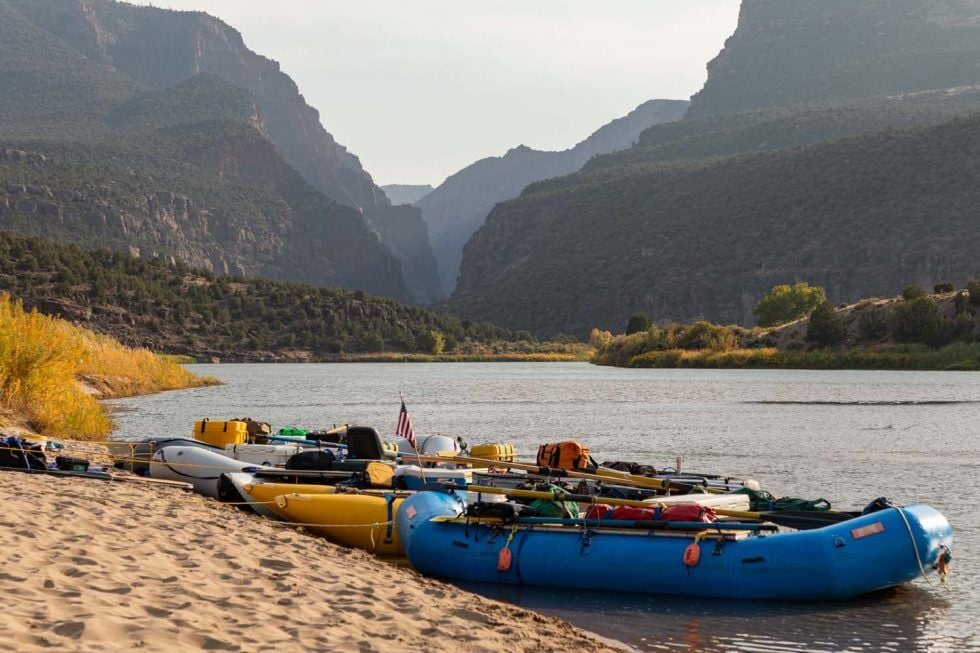 The Green River at the Gates of Lodore in Dinosaur National Monument. A key goal of the Colorado Water Plan is preserving water for the state’s hallmark rivers and its recreation industry. 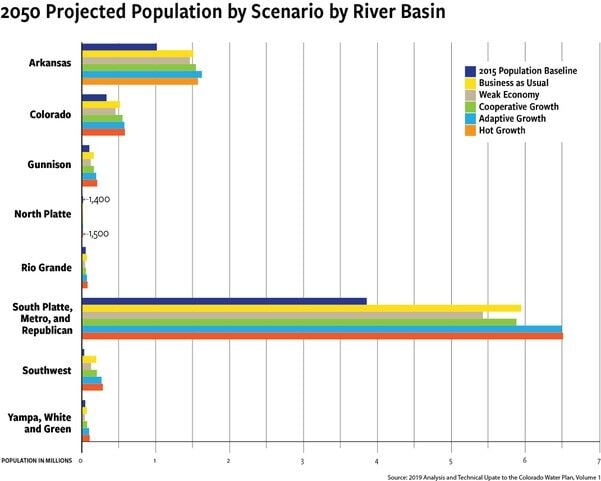 Colorado’s population could grow by varying degrees depending on variables like economic growth, with the most significant growth in the South Platte Basin and metro area. 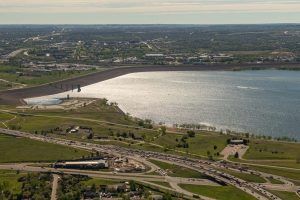 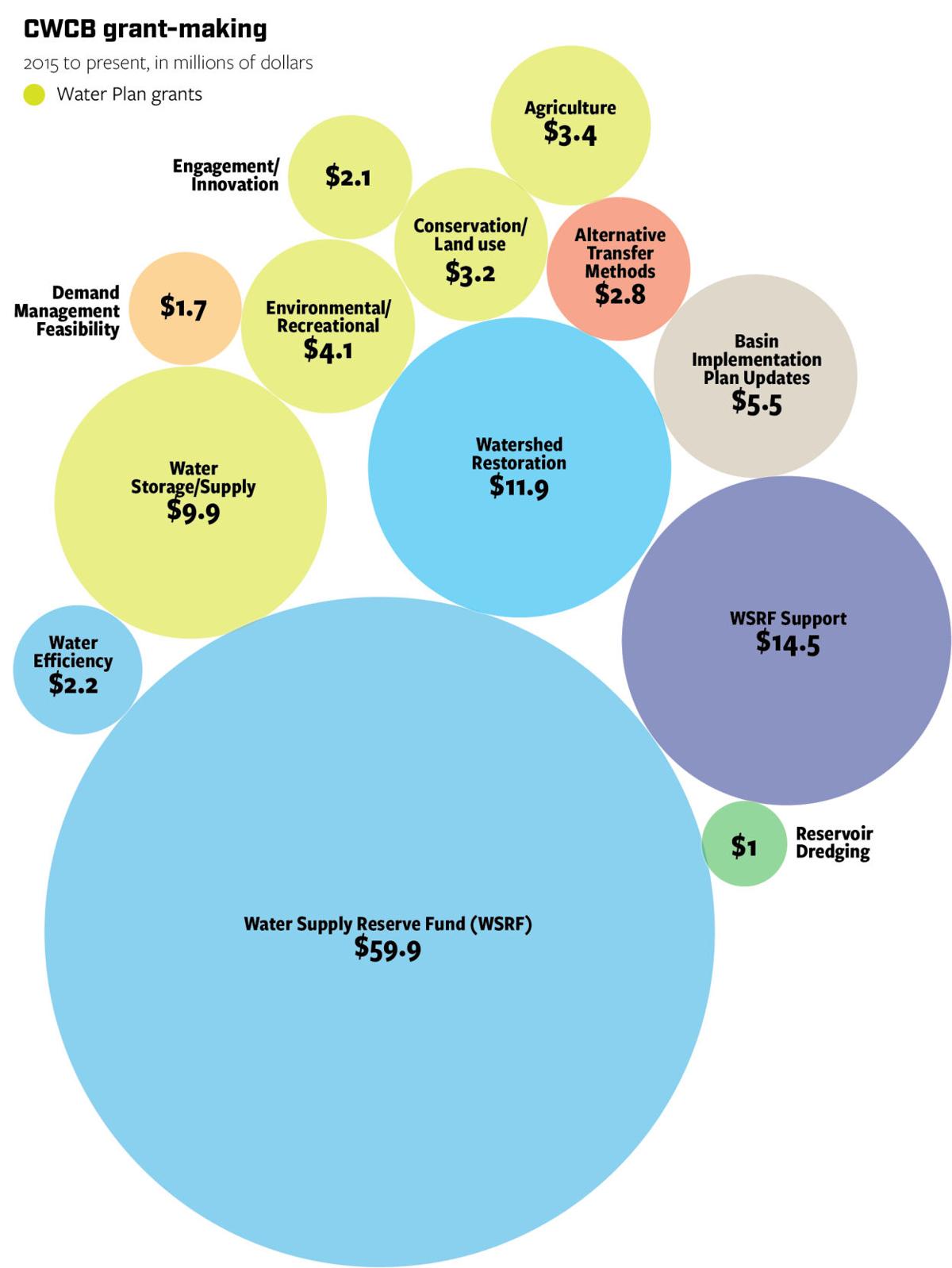 And though the state has made progress on the plan’s ambitious goals and funding needs since November 2015, it hasn’t yet been able to secure the estimated $100 million needed each year through 2050 to fully fund the plan.

Colorado water leaders are optimistic about advances made under the plan thus far. But they acknowledge that this five-year milestone is just the beginning of a long-term effort with no easy path forward. The plan is also undergoing a comprehensive update that will help refine its direction moving forward by incorporating lessons learned and better data.

Power failure: How a winter storm pushed Texas into crisis

“Five years in water time is really a blink of an eye,” said Lauren Ris, deputy director for the Colorado Water Conservation Board (CWCB), the statewide water policy agency tasked with administering the plan. “Even though we’re so proud of the progress we’ve made, we’ve got a lot of work in front of us. There’s a lot to celebrate, but I also think we can’t rest too much on our laurels here.”

The plan provides a framework for ensuring there’s enough good-quality water for all of Colorado’s diverse users, as well as the state’s downstream neighbors. Then-Gov. John Hickenlooper called for the plan’s creation in May 2013, which set in motion 30 months of meetings, public input, writing and reviewing to ultimately create the 567-page plan.

Colorado has long faced unique water challenges in part because its high-altitude rivers deliver water to 18 other states and Mexico, activity that is carefully governed by legal agreements that include compacts and treaties. Accelerating climate change and rapid population growth have added more complexity. Colorado’s population is expected to grow as high as 8.1 million by 2050, up from 5.76 million in 2019, with much of that growth occurring on the Front Range. Meanwhile, 70% to 80% of the state’s water originates on the Western Slope.

Colorado has 2 new national scenic byways. Here's a look at all 13

Many Colorado water leaders agree that the plan — and the multiyear processes for creating and updating it — has fostered an authentic spirit of collaboration. Even if they disagree, people have to work together to find common ground because the plan prioritizes projects that achieve multiple benefits, which in turn makes them more likely to receive state funding.

“Collaboration is now the starting point of conversations about water and maybe that wasn’t always true before,” said Russ Sands, water supply planning section chief for the CWCB. “Like any dinner party, you have some strong conversations and it’s hard. But then ultimately, we do come together around these multipurpose, multibenefit projects.”

Key to putting the plan to work are the public roundtables in each river basin, whose volunteer members are charged with identifying each region’s needs and the methods and funding to meet those needs.

The plan hasn’t completely eased tensions, but it has given water users a forum for voicing their opinions, popular or unpopular. And, perhaps above all else, it has succeeded in keeping water top of mind.

“The best thing the water plan has done is kept the water problem in everybody’s face,” said Max Schmidt, manager of the Orchard Mesa Irrigation District and Grand Valley Project Power Plant. “Traditionally, we have a dry year and everybody gets all worried. Then the next year’s a wet year and everybody forgets about it. People are now saying, ‘This is a long-term, serious problem.’”

Progress under the plan

Work on the plan is occurring mostly on specific projects in Colorado’s eight river basins, which are often funded by loans and grants administered by the CWCB. Five years in, the plan has provided $63.5 million in grants to 241 projects, and $420 million in loans to 82 projects.

According to the CWCB’s data, 76% of the plan’s actions have been initiated or completed, but how this translates to progress on the plan’s eight measurable objectives isn’t clear yet. Those objectives set measurable targets for things like water conservation, new water storage and water-smart land use, as well as informing the public. When asked about progress toward the objectives, the CWCB said it is no longer calculating specific progress metrics using the objectives but is instead tracking new projects or programs that work toward the goals outlined in the plan.

Since taking office in 2019, Gov. Jared Polis has made water one of his “Wildly Important Goals,” issuing a call to the CWCB and roundtables to create a database of 500 local water projects that are ready or nearly ready to launch and are backed by strong data demonstrating costs and potential outcomes.

While the “water WIG,” as it is known, did not come with any funding attached, the exercise has forced local water leaders to refine, prioritize and provide cost estimates for their most promising ideas.

Though the focus on specific projects has been effective for achieving goals in each river basin, some water leaders feel the plan doesn’t go far enough to address statewide issues.

“We need to think more broadly about water,” said Kathleen Curry, chair of the Gunnison Basin Roundtable on the West Slope, rancher and lobbyist. “Having a project-specific focus is great if you’re the entity pushing the projects, but really, overall forest health, stream measurement, snowpack measurement, some of the overall statewide water supply challenges that are out there, those need to be part of the plan as well. (We need to) make sure the plan isn’t simply a laundry list.”

Since the Colorado Water Plan’s inception, state funding for implementation has ranged from a low of $5 million in 2016 to $30 million in 2019, far short of the estimated $100 million needed each year through 2050

In 2020, lawmakers appropriated $7.5 million for the water plan; however, that money is expected to be stretched over three years because of declining oil and gas severance tax revenue and the economic consequences of COVID-19 on the state budget. Many other water-related programs are also not expected to receive additional funding in the near future, according to CWCB spokesperson Sara Leonard.

The plan got a new funding source in 2019 when voters approved Proposition DD, which legalized sports betting and directed tax revenue to the water plan.

Sports betting got off to a slow start in the spring of 2020, thanks to the near-total shutdown of sporting events because of the coronavirus pandemic. But activity picked up speed during the second half of the year, generating $3.4 million in taxes between May and December, double the estimated $1.5 million to $1.7 million per year.

Though not an immediate source of cash, the sports betting initiative was a big win in a state where voters have historically balked at statewide funding for water.

“The water plan requires about $100 million a year in sustainable funding to meet many of the goals outlined for 2025, 2030, 2050,” said Alec Garnett, D-Denver, the lead sponsor of the sports betting bill. “We never thought Prop DD was going to achieve that annual goal, but at least it established a reliable critical revenue source.”

Garnett said he always envisioned general fund money, plus the sports betting tax revenue, to help get the water plan closer to $100 million a year, but this year’s state budget challenges showed just how fraught that path forward may be. Since its launch, lawmakers have contributed general funds to the plan just once.

“Our economy and state budget have been turned upside down by the pandemic and we have to move through this period before we can talk about sustainable funding,” Garnett said.

There were other wins for water funding over the last five years, too. Several local water districts and initiatives found success at the polls, garnering millions of dollars in new taxpayer support for an array of local and regional goals aligned with the plan.

“We’re already seeing where (funding is) being piecemealed together so maybe it’s statewide or maybe it’s a local thing,” said Garrett Varra, who chairs the South Platte Basin Roundtable and sits on the board of the St. Vrain and Left Hand Water Conservancy District. “Voters are more apt to trust people they know and be able to sit down and talk with directly than maybe the state Legislature itself or the CWCB or whoever it is. One way or another, whether it’s done region by region or statewide, it will happen at some point.”

“It’s about choices that we make,” said the CWCB’s Ris. “We’re not locked into any future, that we have the ability to make choices in how we deal with everything coming down the pipe, including population growth, funding, climate change.”

Using the various planning scenarios and other data, the CWCB has also developed new tools to help estimate the environmental impacts and costs of water projects, as well as the costs and consequences of doing nothing. The board also created a new “Engage CWCB” website to encourage more community engagement with the plan.

This month, the Interbasin Compact Committee, a statewide board charged with helping shape policy and coordinating among the various river basins, will reignite talks about how best to fund the water plan and, ultimately, achieve its goals.

Set against the backdrop of record-setting wildfires, intensifying drought in the Colorado River Basin and other parts of the state, escalating climate change, and fears around potential water speculation, state water leaders say that funding can’t come soon enough.

“There’s a lot of talk about how do we get to that $100 million mark with the ever-increasing challenges that Colorado faces, with climate change happening faster than anyone really thought, even in 2015 when the water plan was created,” said Garnett.

Sarah Kuta is a freelance writer based in Longmont. She can be reached at sarahkuta@gmail.com.

Graphics created by Chas Chamberlin, principal with cdcgraphics. He can be reached at chasdcham@gmail.com.

Fresh Water News is an independent, nonpartisan news initiative of Water Education Colorado. WEco is funded by multiple donors. Our editorial policy and donor list can be viewed at wateredco.org.

Following multiple rounds of snow that have hit Colorado in recent weeks, more is on the way.