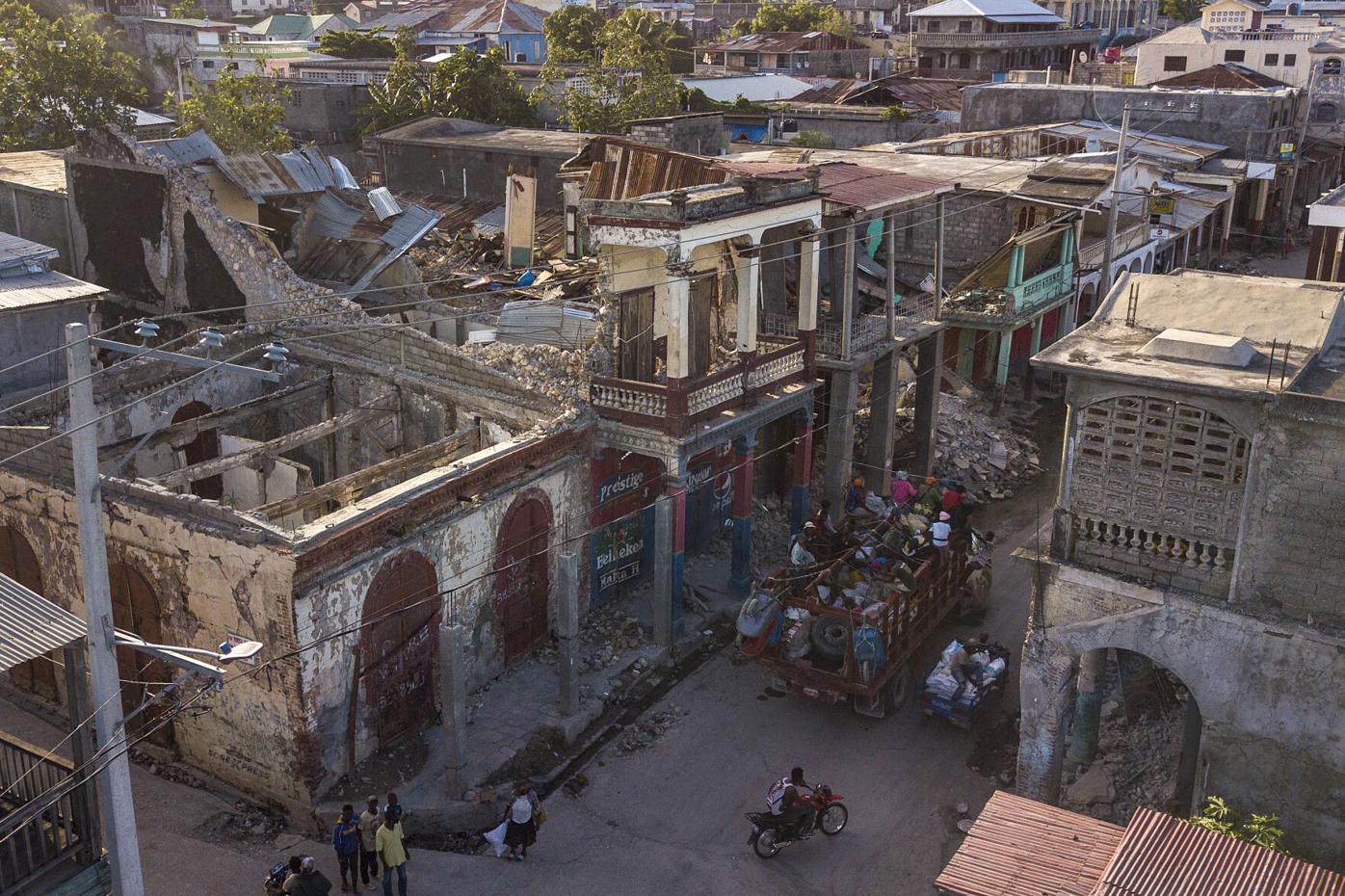 A truck drives past by collapsed building in Jeremie, Haiti, Wednesday, Aug. 18, 2021, four days after the city was struck by a 7.2-magnitude earthquake. (AP Photo/Matias Delacroix) 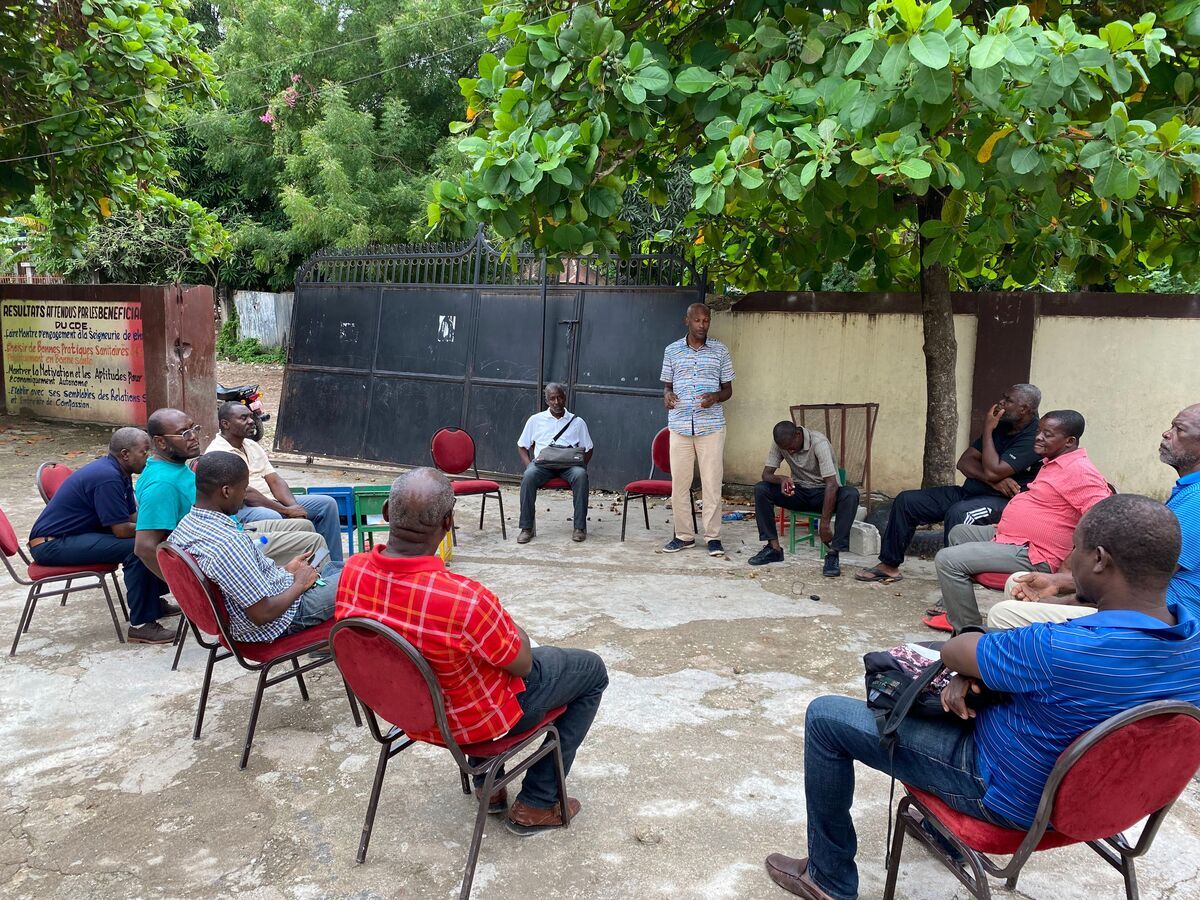 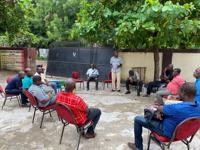 A Compassion International response team met in Haiti this week to discuss strategies in relief and recovery efforts after this week’s earthquake. 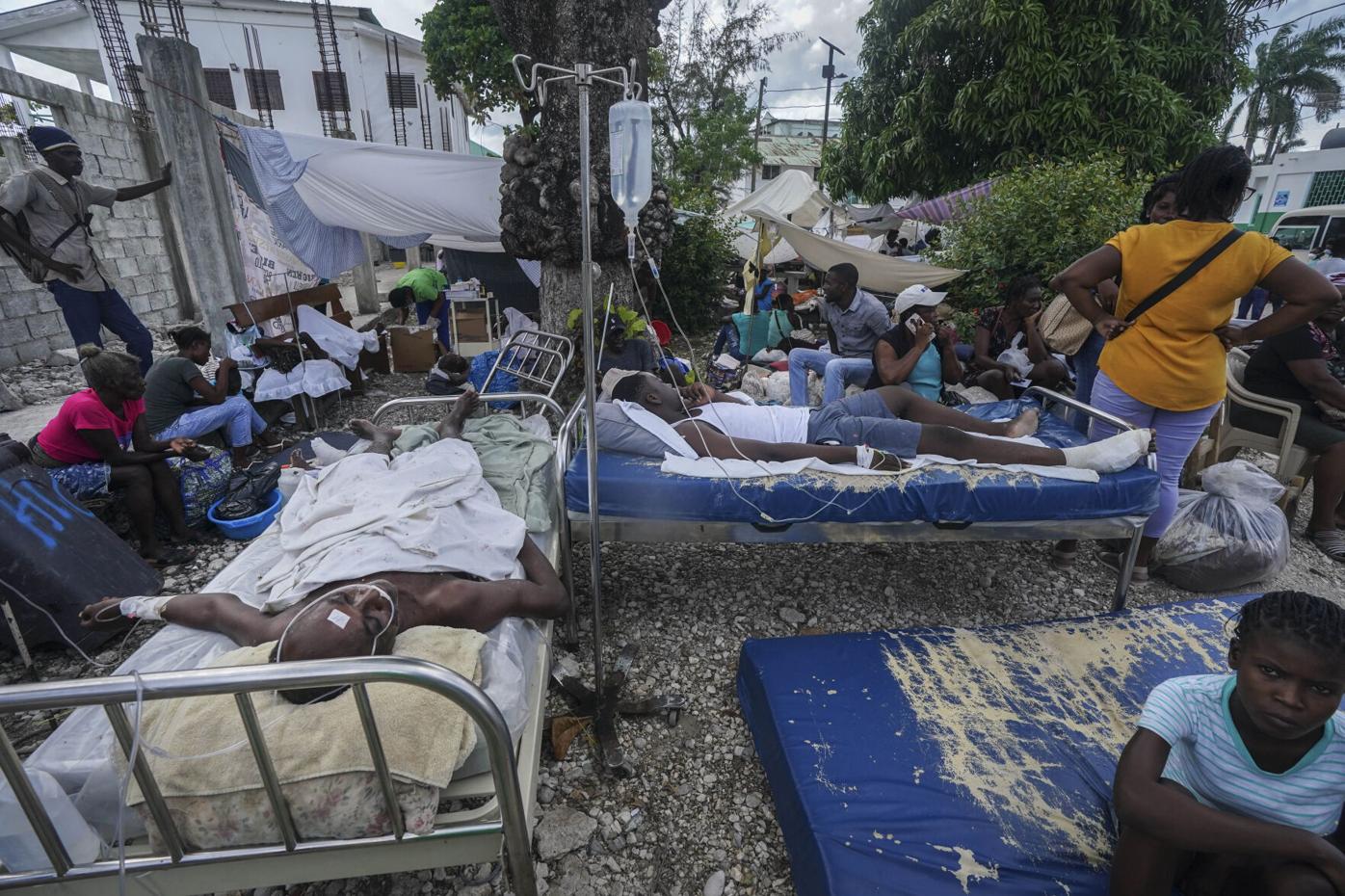 Injured people lie in beds outside the Immaculée Conception hospital on Monday in Les Cayes, Haiti, two days after a 7.2-magnitude earthquake struck 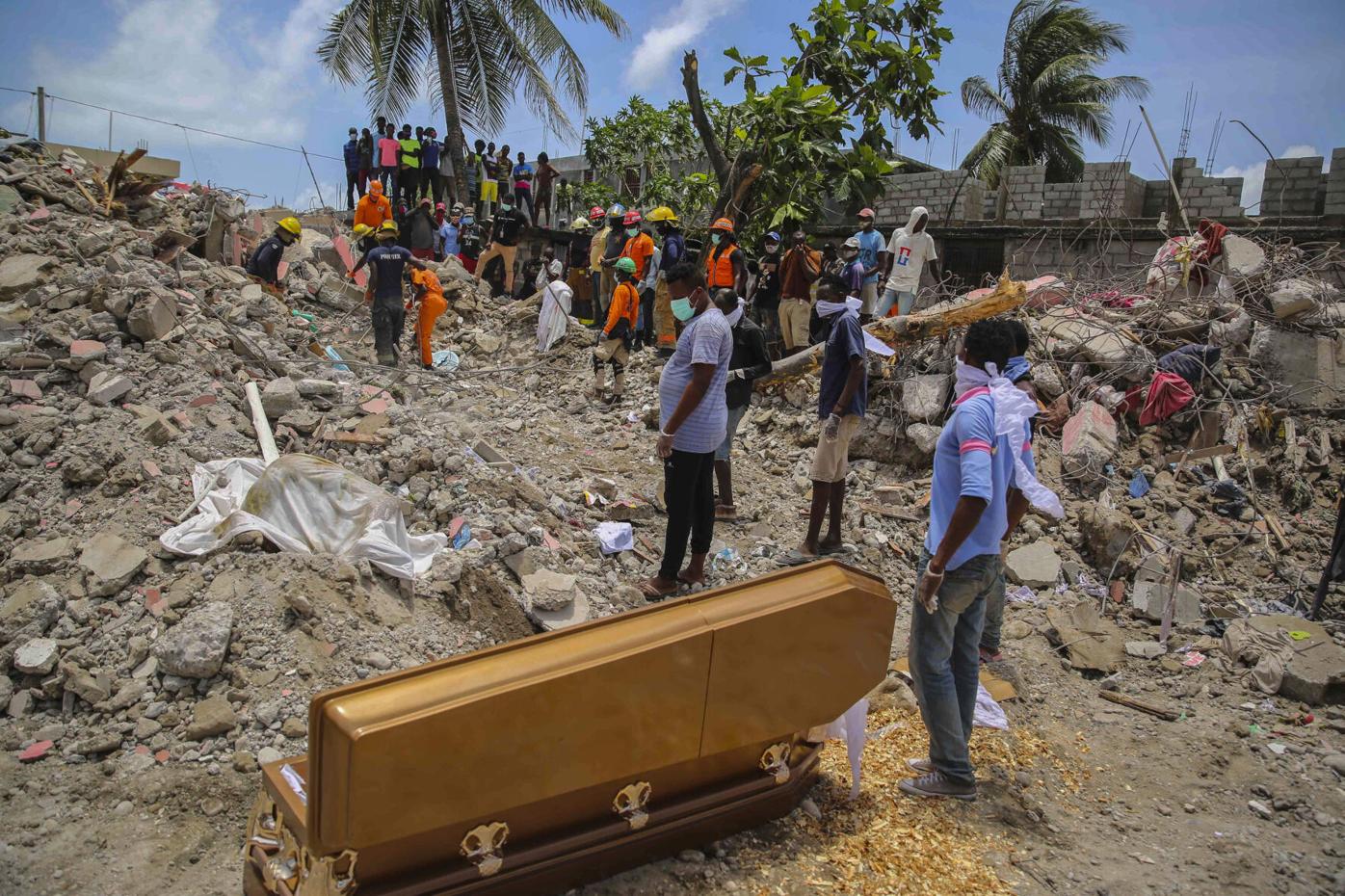 People stand next to the coffin that contains the remains of Francois Elmay whose body was recovered from the rubble of a home destroyed by Saturday’s 7.2-magnitude earthquake, in Les Cayes, Haiti, Wednesday, Aug. 18, 2021. (AP Photo/Joseph Odelyn) 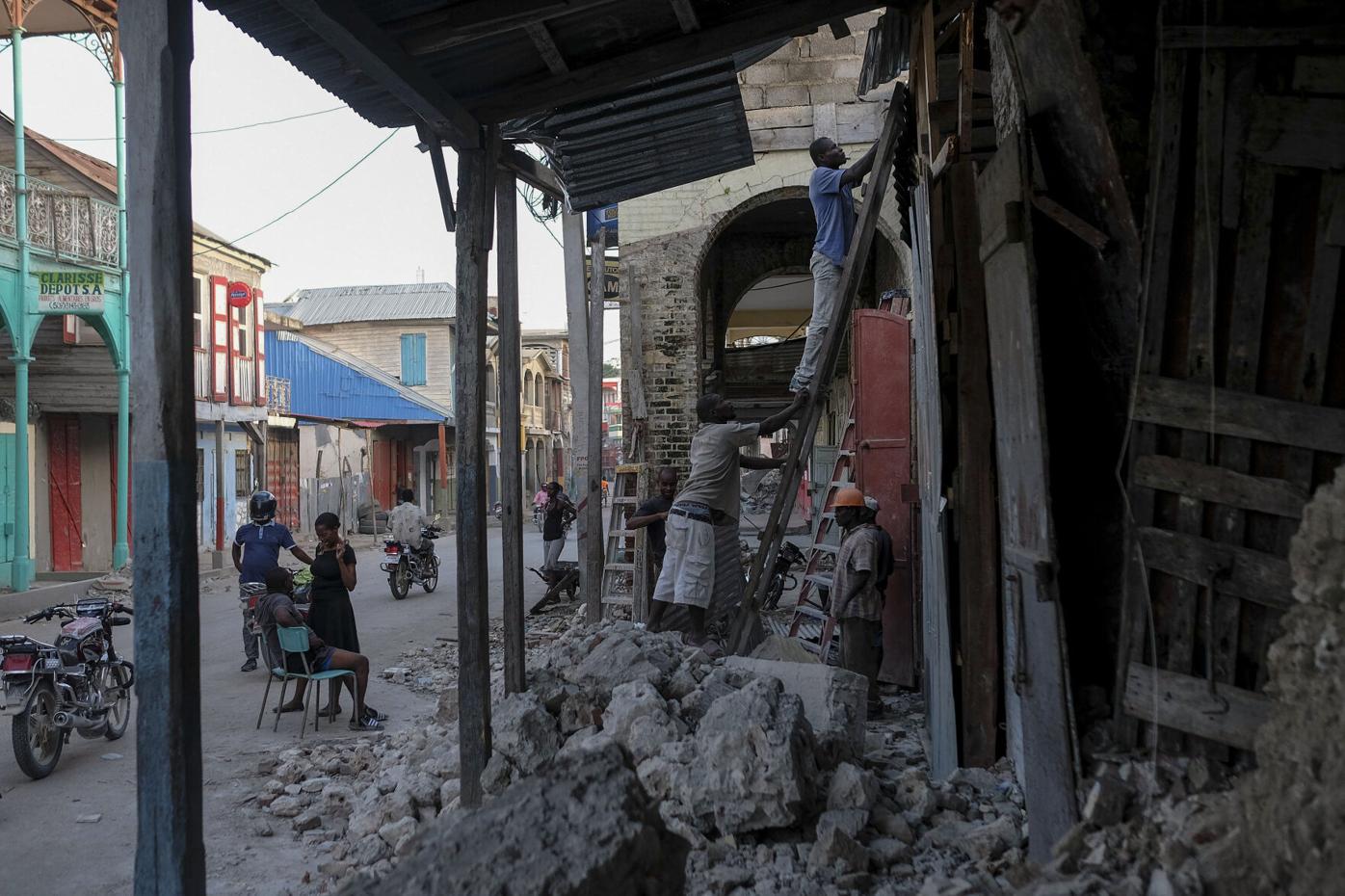 Men work on a damaged building in Jeremie, Haiti, Wednesday, Aug. 18, 2021, four days after the city was struck by a 7.2-magnitude earthquake. (AP Photo/Matias Delacroix)

It took six years and about $30 million for Colorado Springs-based Compassion International to rebuild schools, churches and homes for families that the child- development nonprofit serves in Haiti when a 7.0-magnitude earthquake hit near Port-au-Prince on Jan. 12, 2010.

Less than a week after a 7.2-magnitude earthquake struck last Saturday in a more rural area of the country, plans to reconstruct already are underway, said Edouard Lassegue, regional vice president for Compassion International.

Early estimates are that damage to buildings linked to the organization’s work will cost $20 million to repair, he said Wednesday night in a phone call from Haiti.

“This one was stronger, but fortunately it did not hit in populated areas this time, which accounts for lower casualties,” he said.

The death toll from last week’s temblor neared 2,200 on Thursday, the nation’s civil protection agency reported, with many still missing and about 12,200 injured.

Lessons learned from 11½ years ago are driving the current response, Lassegue said.

People have lost their homes, jobs, farms and livelihood, which necessitates medical attention, supplies, food and water and other material goods.

“But we learned from 2010 that we want not to just bring stuff to the people who are affected,” he said. “Millions have been spent bringing stuff. After that, what happens? They have nothing left behind.

“That is our concern: to lead the people to a better position than they are in now so they can lead their families in the future.”

Compassion International is not a relief organization — typically spending $4 million annually on disasters, or 1% of a $650 million worldwide programming budget — but it is one of several global agencies responding in Haiti, one of the world’s least-developed countries due to ongoing political, structural and environmental instability.

Food, water and electricity are constantly lacking, Lassegue said, and the earthquake has exacerbated problems with meeting basic human needs.

Relief efforts seem more coordinated with less duplication and wasted resources this time, he said, and the ruling government — whose president was assassinated July 7 at his residence in Port-au-Prince — seems to be “trying to play a role.”

Compassion’s national office in Haiti employs about 100 people, who work with 125,000 children in child development centers at 320 churches. Staff are on the ground in  affected areas and have met with pastors, center directors and local leaders to determine the most urgent needs, Lassegue said.

More Compassion employees will arrive in Haiti next week to distribute supply kits. To donate, text Haiti to 97646.

Children and adults are sleeping outside because they are afraid to go in buildings, Lassegue said, and safety has become a concern. Due to gang violence, some roads are too dangerous to travel on to transport emergency food and medical care, he said.

Of the 91 churches in southwest Haiti where Compassion operates child-development centers, 46 have been directly affected by the earthquake, Lassegue said. Those 46 churches minister to more than 17,000 children and youth, he said, and their families.

“We work in the development of these young people to make them grow to be responsible adults, so that they have an impact in their region and their lives,” Lassegue said.

Compassion staff also will help rebuild collapsed churches and assist with reconstructing 25 to 30 schools, he said.

“One lesson we learned in 2010 was that the children want to have that environment with caring adults advising them, tutoring them, praying with them,” he said.

“We’ll have some transitional office space and classrooms open again as early as next month, to bring stability to children, so that they can feel safe.”

Many buildings are stiff concrete structures that don't flex when the earth shakes intensely, so they collapse, said Jason Chandler, water, sanitation, hygiene response program manager for Engineering Ministries International, a nonprofit based in Colorado Springs with 10 offices worldwide.

Engineering Ministries International is sending three engineers to Haiti next week to assess damaged buildings and a project that was underway — making safety improvements to 100 existing emergency shelters that people can go to during hurricanes.

"Some have had significant damage, which has likely changed the scope of what we were rehabbing," Chandler said.

Another priority for Compassion International is providing additional shelter — not in the form of public tent cities, as was done in 2010 and led to child-protection issues, Lassegue said — but temporary setups in yards of destroyed homes, so that families can be together.

Having Christian counselors address the trauma children have experienced and training adults in reestablishing small businesses are other developing plans, Lassegue said.

Lassegue, who works out of the Deerfield Beach, Fla. office, which serves 12 countries in Latin America and the Caribbean, happened to be in Haiti on Saturday when the earthquake hit at 8:29 a.m.

He’s staying in the capital, Port-au-Prince, which is about 80 miles away from the epicenter. He said it was the worst earthquake he's ever experienced.