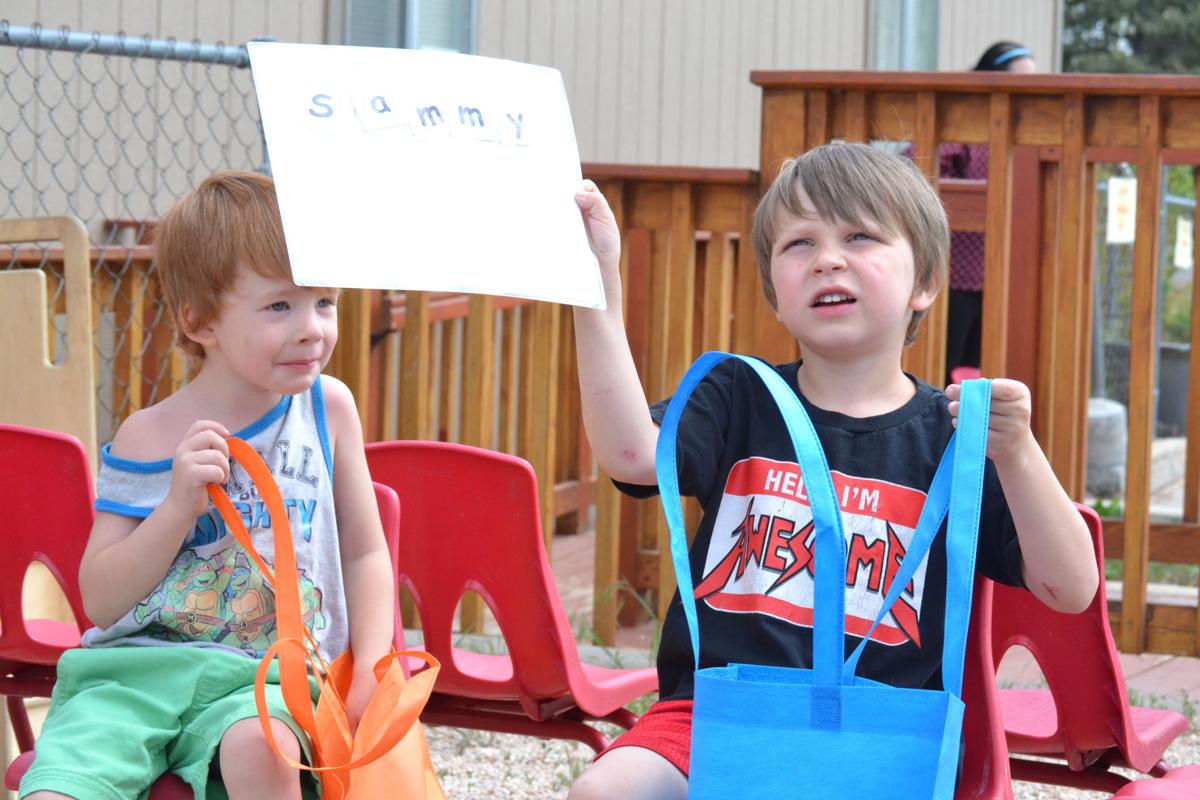 Three-year-old Zach Letsinger, left, looks on as his brother, Sam Bucheger, pulls a sign with his name on it out of his summer goodie bag Friday. 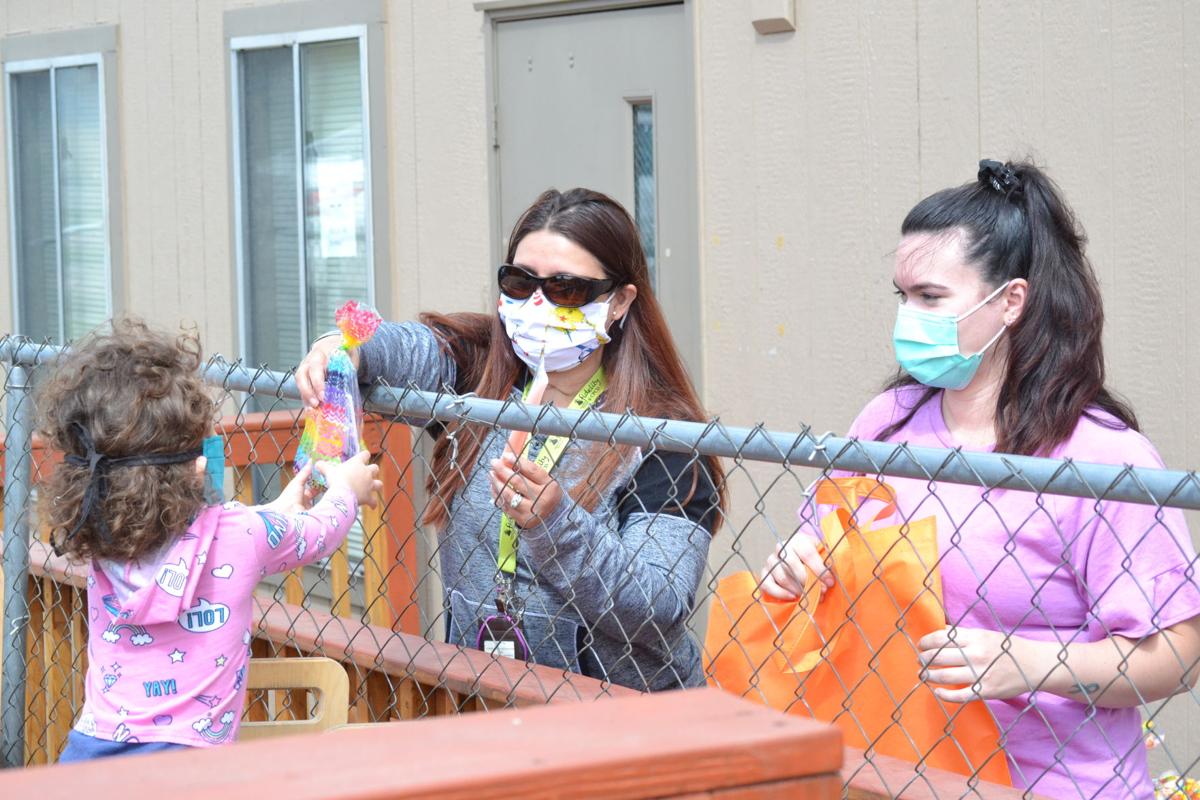 Three-year-old Zach Letsinger, left, looks on as his brother, Sam Bucheger, pulls a sign with his name on it out of his summer goodie bag Friday.

Young kids might not understand the word “pandemic,” or even be able to pronounce it, but they know what adds up to a good day.

Friday was one of the best in a while for 5-year-old Sam Bucheger and 3-year-old Zach Letsinger.

A summer goodie bag they picked up from their Head Start preschool center on Pikes Peak Elementary School property held their attention for half a minute, as they hauled out leftovers from their shortened preschool year, including signs with their names and a memory book with photos. Notebooks, pencils, bubbles, sidewalk chalk, activity sheets for continued learning and other cool stuff was inside, too.

But seeing some of their classmates drew the biggest squeals and giggles.

“I really want the kids back in school,” sighed their stay-at-home mom of six. “I love all you guys, but there’s too many at home now.”

How has she coped?

“I don’t know if I have been coping,” she answers. “I’ve been settling.”

Child care is among the coronavirus casualties.

Some child care centers have been closed during the pandemic, others have been serving children of essential workers under a statewide emergency collaborative funded by federal stimulus money. The program ends next week.

During coronavirus shutdowns, there was more supply than demand for child care for health care workers, store clerks and other essential employees in El Paso and Teller counties, said Diane Price, president and CEO of Early Connections Learning Centers in Colorado Springs.

As business resumes, some day cares won't reopen, and most will have fewer slots available with the 10-children-per-classroom rule now in place under pandemic restrictions.

“The percentage of children we’ll be able to serve as a community is going to be lower,” said Marty Kemmer-Contreras, spokeswoman for Community Partnership for Child Development. The organization provides 65 early childhood education classrooms in the region under the federal government’s Head Start programs for birth through 5-year-olds.

“As a community, we’ll have to look at that,” she said.

Early Connections Learning Centers will lose about 100 of its 250 seats if what's being called the 10 rule sticks around for awhile, Price said.

“For some centers, it’ll be a 50% reduction,” she said. “Our classes are typically 15-16 kids, so we’ll have less capacity, but staff ratios haven’t changed.

“The costs haven’t gone down, but the amount of revenue we can bring in will take a big hit.”

"We'll still serve the same number of kids, but we'll definitely have to be flexible," she said.

The seven KinderCare Learning Centers in Colorado Springs and five in metro Denver will shrink from 900 children to about 600 under the new operational guidelines, said district leader Dianne Bennett.

KinderCare closed three of its Colorado Springs centers for five weeks and left four open for essential workers. All are now open.

“We’ve had a good rebound to the business, but even if we had every family that wanted to stay, we’d still have to reduce occupancy by almost 30%,” Bennett said. “This is new for all of us; we didn’t have a business model for this.”

New practices include meeting parents and children at the door for drop-off and pickup and not allowing families to enter the center, as well as taking temperatures of children and staff and stepping up disinfecting.

“As families go back to work, the need will be greater,” Bennett said.

Head Start closed its centers in six local school districts in mid-March, including the one at Pikes Peak Elementary in Harrison School District 2.

“It has been very difficult for everyone,” said Karina Jenkins, whose 4-year-old daughter attends the program. “My daughter is still learning, but it’s a lot harder not having her be in school. She doesn’t get to bond with her friends and misses them and her teachers.”

Friday was the last day of the school year for Head Start teachers, who have been doing online communications, meetings and assignments for families.

A $10,000 grant from Pikes Peak Community Foundation’s Emergency Relief Fund to offset COVID-19 impacts helped the organization with rent and utilities payments, and an online fundraiser brought in $25,000 to assist families with food, rent and utilities, Kemmer-Contreras said.

The local relief fund, which has distributed $1.1 million in community donations to 54 nonprofits in El Paso and Teller counties, also awarded $50,000 to Early Connections Learning Centers.

The organization received a total of $83,000 in grant funding, which paid for salaries for teachers and other operations, she said.

When Eileen Petchtle’s child care center closed in mid-March, the mother of four who works as a certified nursing assistant at a nursing center was concerned.

“It was worried at first,” she said. “Without child care, I wouldn’t be able to do my job.”

Petchtle was able to find placement at Early Connections for her three youngest, ages 1, 6 and 8, through the statewide emergency child care program, which is now coming to a close.

“It’s been a great help and a blessing,” Petchtle said. “I’d just like to thank the community.”

Wednesday was a typical weekday afternoon at the spacious Smith house in Black Forest.