Editor's note: This article has been updated with a statement from the governor.

Last month, Polis signed a proclamation establishing the state holiday that encourages Coloradans to avoid consuming animal products for 24 hours. The proclamation was tied to an annual event backed by the Farm Animal Rights Movement that began in 1985. 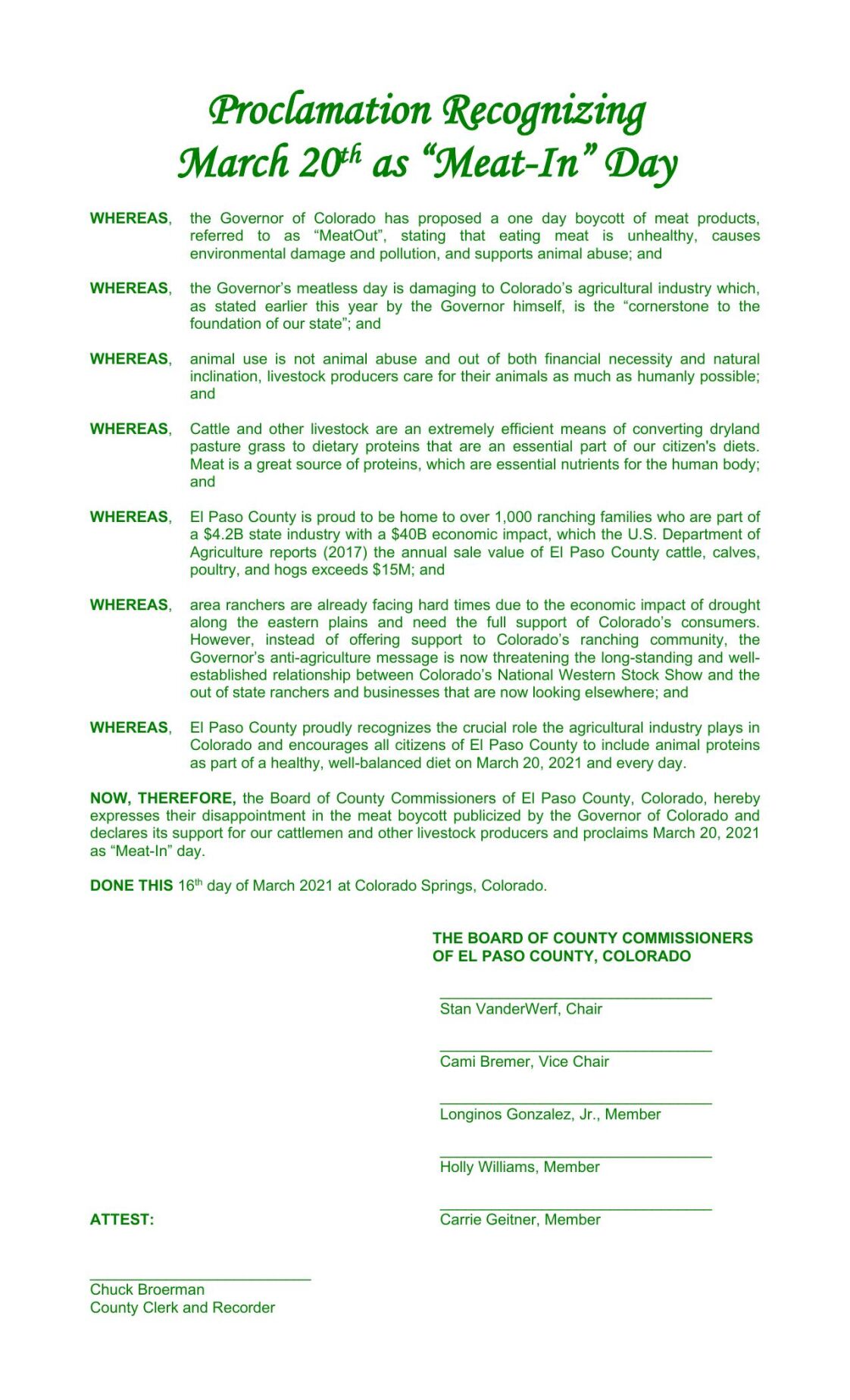 “This is not just about meat. This is truly about appreciating the people that we all rely on for our food supply and appreciating a western way of life that is worth preserving,” Commissioner Carrie Geitner said.

MeatOut Day is meant to promote healthy diets and protecting the environment, Polis has said.

His proclamation reads, in part, that “removing animal products from our diets reduces the risk of various ailments, including heart disease, high-blood pressure, stroke, various cancers, and diabetes; … a plant-based diet helps protect the environment by reducing our carbon footprint, preserving forests, grasslands and wildlife habitats, and reduces pollution of waterways; and … a growing number of people are reducing their meat consumption to help prevent animal cruelty.”

Get the latest Gazette update by signing up for our newsletters

The move generated outrage statewide. Nine of the top 10 cattle-producing counties, all on the Eastern Plains, are now referring to March 20 as Meat Producers Appreciation Day, or some variation of that, Colorado Politics reported.

Polis’ proclamation was an “insensitive approach,” El Paso County Commissioner Stan VanderWerf said Tuesday, and the governor could have chosen to support people who don’t eat meat ,and support livestock organizations and the state’s cattle industry all at once.

“He could’ve … just simply said that people can make a choice,” VanderWerf said.

More than 1,000 ranching families live in El Paso County, according to the proclamation commissioners passed unanimously. The annual sale of the county’s cattle, calves, poultry and hogs is more than $15 million, the U.S. Department of Agriculture reported in 2017.

"Gov. Polis applauds the recent declaration by the El Paso County commissioners and is thrilled that he has helped start a grassroots movement of support for cattlemen and the beef industry," his spokeswoman Shelby Wieman said in a statement issued Tuesday evening to The Gazette. "Gov. Polis is a strong supporter of Colorado jobs in the meat industry and was just in Greeley and Fort Morgan where the state partnered to provide the lifesaving vaccine to meat processing workers. Gov. Polis is enthusiastic about how his proclamation is drawing needed attention and support for our ranchers and agriculture economy."

But VanderWerf said he felt it was “appropriate” to pass a local proclamation declaring Meat-In Day as a “counter-balance and just remind the governor to be a little more thoughtful in the way he manages some of these kinds of activities.”

More than 100 barbecues and similar events have been scheduled statewide on Saturday to celebrate the cattle industry. Several El Paso County commissioners said they planned to attend barbecues or eat more meat than usual that day.

Polis proclamation on MeatOut Day has been a boon for beef

That day, March 20, is also now being referred to as Meat Producers Appreciation Day, or some variation of that, in at least 25 counties, including the top 10 ag-producing counties, all in the Eastern Plains.