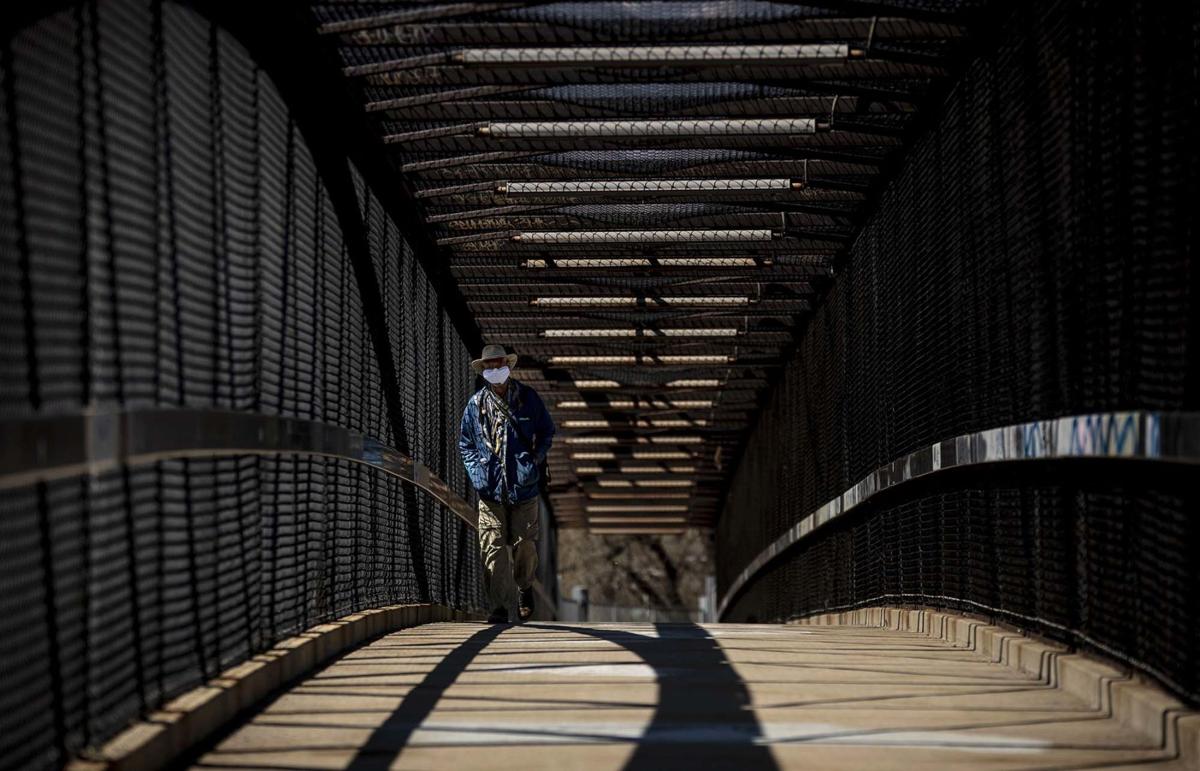 Walter Palmer crosses over Interstate 25 on the pedestrian bridge wearing a mask while out on a walk near Monument Valley Park in Colorado Springs. Colo., in Thursday, April, 2020. El Paso County Public Health officials said Tuesday data around the numbers of people needing hospital care is encouraging. New guidelines released by the Colorado Department of Public Health and Environment allow parks, pools, gyms, churches, rafting and fishing to resume opening. 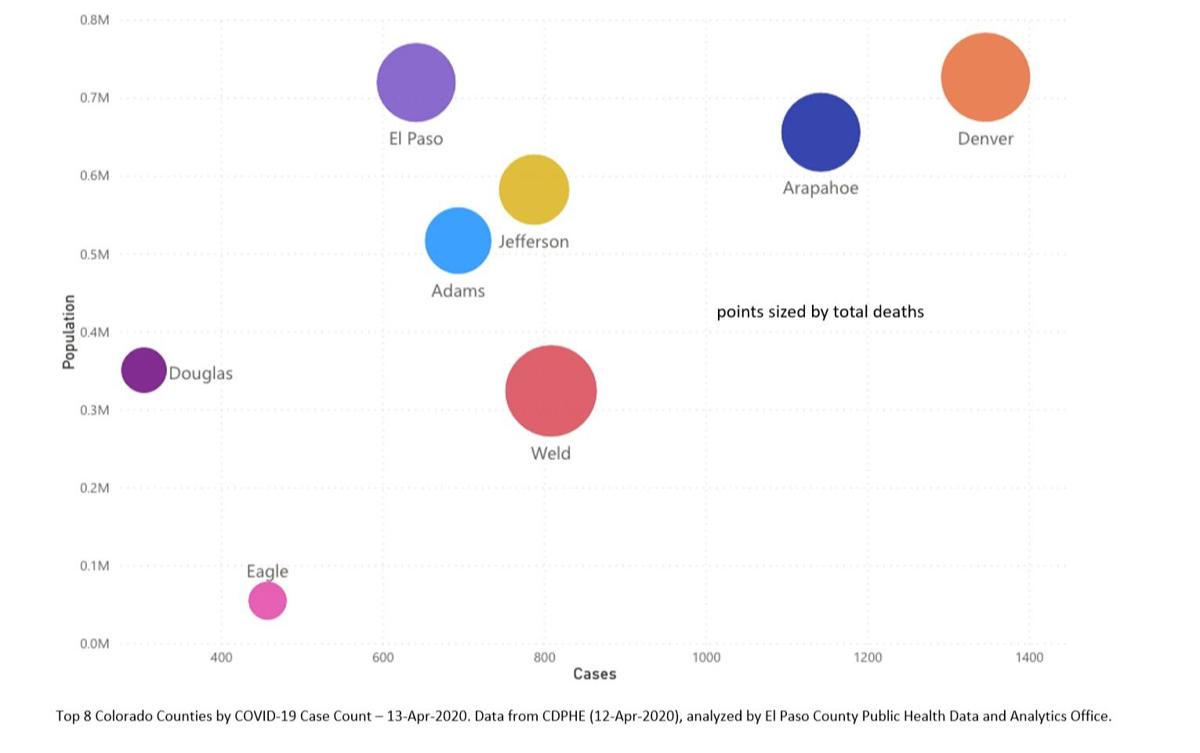 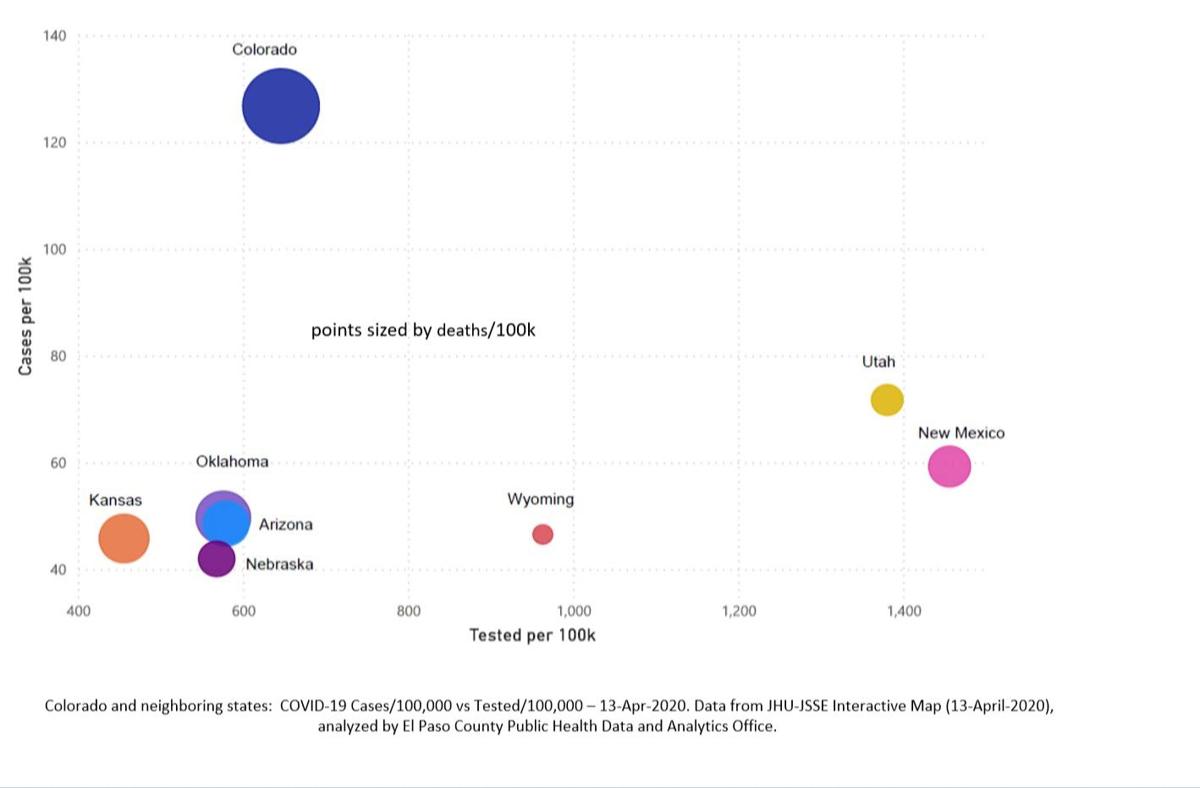 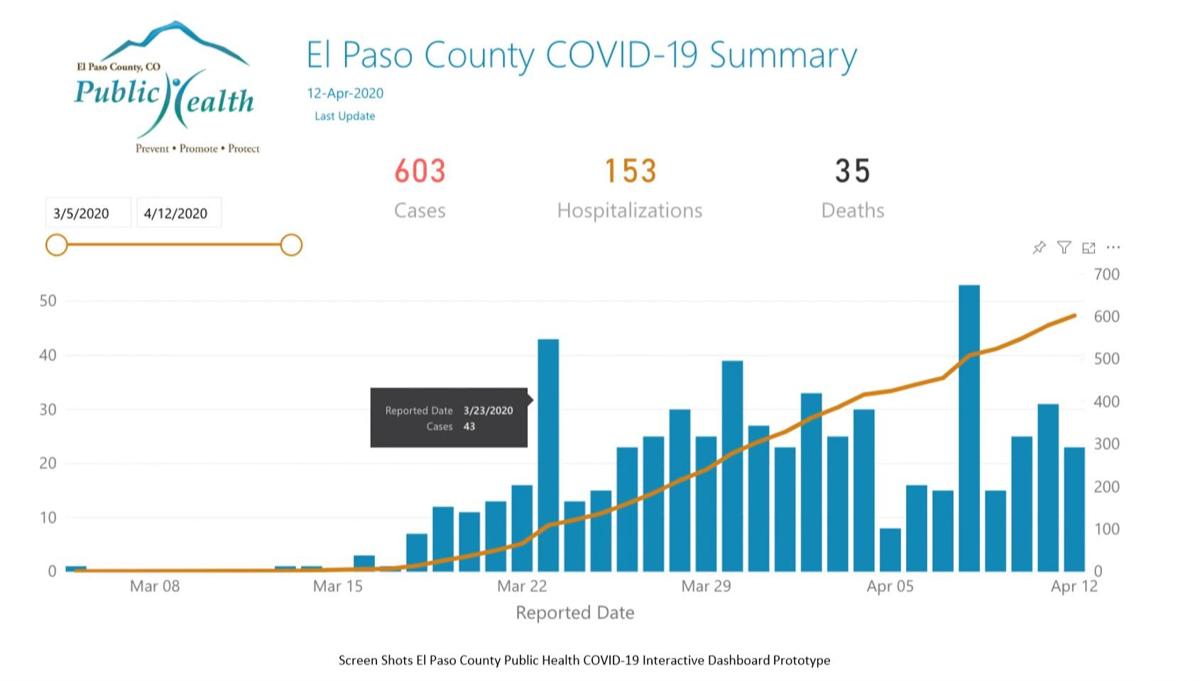 Walter Palmer crosses over Interstate 25 on the pedestrian bridge wearing a mask while out on a walk near Monument Valley Park in Colorado Springs. Colo., in Thursday, April, 2020. El Paso County Public Health officials said Tuesday data around the numbers of people needing hospital care is encouraging. New guidelines released by the Colorado Department of Public Health and Environment allow parks, pools, gyms, churches, rafting and fishing to resume opening.

The number of coronavirus patients who need hospital care is leveling off in El Paso County, a sign that strict social distancing measures in the community are working, officials said Tuesday.

“We are winning and we are in a good place,” Dr. Leon Kelly, deputy medical director for El Paso County Public Health, told county commissioners. “But the victory is not ours. ... We have got a long, long, continuously challenging road ahead.”

The number of patients admitted to hospitals between March 13 and March 20 increased dramatically, showing what the trend could look like if no steps were taken, Kelly said. In late March, the number of those hospitalized exceeded 100, but it stopped rising rapidly after that, which has kept the hospitals from becoming overwhelmed, he said. The county had seen 153 hospitalizations as of Sunday.

Hospitalizations are a better indicator of the spreading virus than the number of patients that test positive because the shortage of testing supplies has limited who can be tested, Kelly said.

“The overall picture is an incredibly encouraging one,” he told the Colorado Springs City Council. Kelly and other public health officials gave back-to-back presentations Tuesday to elected officials for the county and city.

El Paso County led the state with a high number of coronavirus deaths in March, a ranking health officials attributed to the virus spreading among the elderly who are at high risk of the disease, including those exposed during a bridge tournament.

Colorado as a whole has recorded a high rate of patients testing positive compared with surrounding states, such as New Mexico and Wyoming, likely because it has large cities, such as Denver and Colorado Springs, Kelly said.

County health officials said they believe 171 coronavirus patients have recovered out of the 248 residents treated for the virus.

The number of people who have tested positive for the virus in El Paso County is 652, state data shows. Not all who test positive require treatment.

In mid-April, public health employees expect to start following up with those they believe have recovered to interview them about their experiences and determine if there are symptoms of the disease officials are overlooking or not stressing enough, Kelly said.

The encouraging hospitalization data is allowing public health officials to start planning how to allow more regular activities that have been prohibited under the state’s stay-at-home order, Kelly said. The statewide order is scheduled to end April 26.

Kelly laid out for elected officials how social activities could restart, but did not offer a timeline for relaxing stay-at-home and social distancing guidelines.

Parts of any change will likely be made at the state level, but others could be local, he said.

Public health officials are preparing to ramp up testing before social distancing rules are lifted, which might drive an increase in the number of positive cases and discovery of new clusters of disease, said Dr. Robin Johnson, medical director for El Paso County Public Health.

Prevention could become more targeted to protect at-risk groups, such as those in long-term care facilities and those who are immunocompromised, he said.

“Young healthy people will be the canary in the mine, if you will, as we send them out into the world and see how it goes,” Kelly said.

When daily activities return to normal, the virus will continue to spread through the community, which is positive because it will help to build immunity in the population, he said.

Public health employees will have to continue track who those people who test positive and who they come into contact with, and ask those who are exposed to quarantine themselves, he said.

Public health officials are bringing on additional staff to help track those potentially exposed to the virus, he said.

Large gatherings, such as concerts, are likely to be prohibited for awhile to help limit the spread of the virus, even when other activities are allowed, he said.

A vaccine could be available by next summer, which would allow communities to deal with the virus in the long term, he said.

Councilwoman Yolanda Avila asked public health officials to address how the virus is hitting minority communities in Colorado Springs because those communities have seen a high rates of death nationally.

Public health officials do not have ethnicity data for patients who have tested and it only has some ethnicity data for those who have died, Kelly said. However, the county has a health equality coordinator who will be focusing on the spread of the virus among minority populations, he said.

“We recognize it is a critical need,” Public Health Director Susan Wheelan said.

Officials will also be releasing a dashboard of the coronavirus data on its website elpasocountyhealth.org.

While there are now early signs that the novel coronavirus could be approaching a peak in reported cases in Colorado, outbreaks at non-hospital health care facilities, such as nursing homes, assisted and senior living residences and rehabilitation centers show no signs of slowing.