A rendering of a proposed 8,800-square-foot two-story building to be built at 12740 Black Forest Road in Black Forest as seen from the east. The lot is just north of Black Forest and Shoup roads. 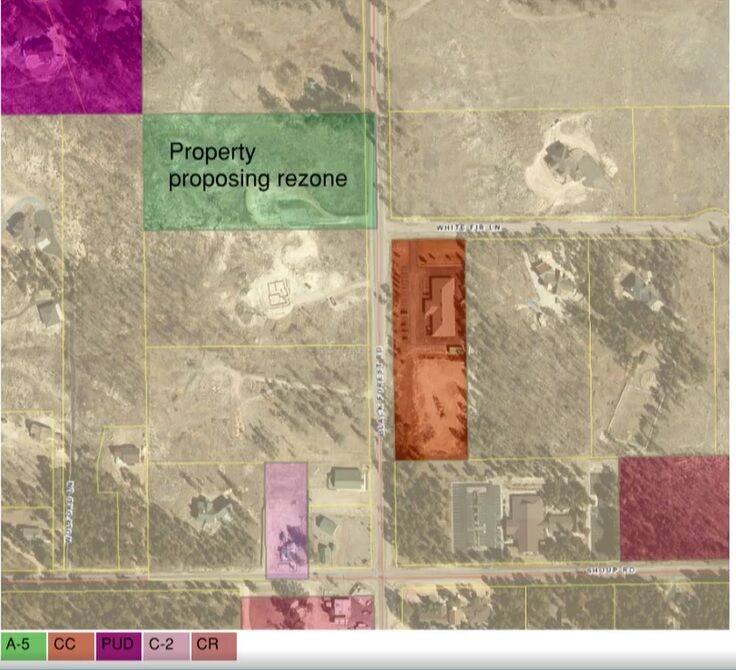 The property at 12740 Black Forest Road in Black Forest, highlighted on this map in green, was previously zoned A-5, for agricultural use. The El Paso County Commission approved a request to rezone the property CC, or community commercial. This map shows various other zoning districts in the surrounding area.

A rendering of a proposed 8,800-square-foot two-story building to be built at 12740 Black Forest Road in Black Forest as seen from the east. The lot is just north of Black Forest and Shoup roads.

The property at 12740 Black Forest Road in Black Forest, highlighted on this map in green, was previously zoned A-5, for agricultural use. The El Paso County Commission approved a request to rezone the property CC, or community commercial. This map shows various other zoning districts in the surrounding area.

Editor's note: This article has been updated to clarify the nature of S-5!'s business and clarify the lot is located within an identified commercial node.

Nearly 30 residents submitted written requests and petitions with hundreds of signatures, which applicant Rob Haddock and project supporters said provided false information about the intent of the project, urging commissioners not to rezone the property at 12740 Black Forest Road from agricultural use to community commercial use, citing concerns a proposed 8,800-square-foot, two-floor building was incompatible with the residential area around it.

County planners said the proposed site for an office building for Haddock’s S-5! metal roofing product innovation company is an allowed use within the zoning district.

While the lot is surrounded by rural residential properties, it lies within an identified commercial node — street intersections that feature small- and medium-sized businesses to primarily serve the needs of the immediate surrounding area, county planner Nina Ruiz said. Other nearby properties used commercially at the intersection of Black Forest and Shoup roads, where the lot is located, include three churches, a community center, a restaurant, an event center, a veterinary clinic and a vehicle repair shop.

“This area of the county is very commercial in nature,” Ruiz said.

Many residents said they feared the business would use the site to wholesale its metal roofing attachment products and services.

Jeff Brock, a White Fir Estates resident who submitted a letter of opposition on behalf of all owners within the White Fir Estates Owners Association adjacent to the property, said the strongest argument against it was that the community commercial zone was for “retail businesses which serve the community, not wholesale as Haddock’s business is.”

Haddock said the building would only house up to 16 to 18 of the company’s executive staff and would not be a retail center because it does not include a showroom where people can shop for products. Any sales or services would be handled online or by phone, he said.

Black Forest residents Diana and Mike Taylor argued in a letter that the business was not in service to the community, as was the veterinary clinic that once occupied the lot but burned down in the 2013 Black Forest fire.

The veterinary clinic “was unassuming and blended with the surrounding community,” their letter states. “The property in question has residential homes in all four directions as neighbors, which makes this commercial venture out of character for the neighborhood.”

Haddock said the proposed office building and an existing barn on the property are “the same scale and mass footprint as other structures in the neighborhood.”

He said the building would look like a residence with building materials such as logs, natural stone and moss rock that would be in harmony with “rustic mountain rural and local architecture.” The building will be about 23 feet high, well under the maximum 40-foot height required by the county Land Development Code, he said. Builders will adjust the site’s slope so the new building will sit 10 feet lower on the ground than the veterinary clinic did.

Haddock said he has already screened the lot with nearly 40 trees and shrubs and will plant more, for a total of more than 70 trees and shrubs. Commissioners granted Haddock a screening requirement waiver that will allow him to replant the property with various native pines rather than construct a privacy fence or wall that Ruiz said would have caused the property to stand out instead of blend in with surrounding properties.

The barn will be used as a digital film studio, Haddock said, because his business does its own filming for educational and marketing purposes.

“People say they drive down the road and love to see this barn. I live behind this barn and it is not beautiful,” Trapper’s Pass Trail resident Mike Schultz said by phone in public comment. “... There’s no reason for this to be built in the middle of our neighborhood. There are other (planned unit developments) but those are small businesses and those are small properties. It’s not this enormous warehouse.”

The Taylors also cited traffic concerns. Haddock said anticipated traffic from the business would be between eight and 12 roundtrips per day, less traffic than generated by the veterinary clinic or the adjacent churches and community center, which hosts several weekend events including farmer’s markets.

“... We’re not adding anything to the worst-case traffic scenarios that are already congesting that intersection on Saturdays and Sundays, primarily,” he said.

Nikki Upchurch, whose property shares the eastern boundary line with the lot, said she wanted to remove her name from a petition she signed which she said misled residents about Haddock’s intent for the property.

Upchurch said she was told the landowner was a wealthy out-of-state developer who would possibly run three businesses from the property, including developing identity recognition devices such as retinal scanners and hand-printing. She said she was also told the business would generate traffic as trucks transported metal for distribution.

“Since that time, I have investigated this development plan further and realize it to be very different from the information shared with me back in the summer,” she said. “… I fully support what Mr. Haddock is proposing and believe he will be a good neighbor.”