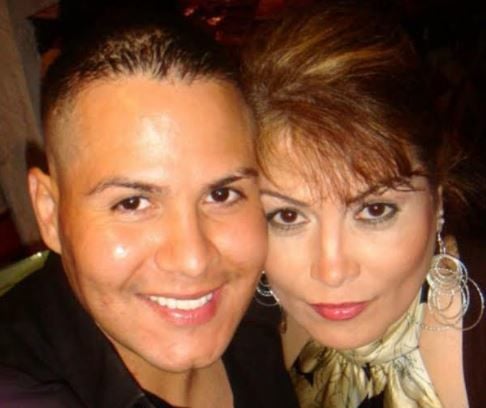 Susan Cespedes and her son, Jonathan. Susan, 55, died in October after she experienced a medical crisis while incarcerated at the El Paso County jail. Jonathan and other family members are now threatening to sue the county for nearly $5 million, saying the jail’s medical and security staff ignored repeated warning signs and her pleas for help. Photo courtesy of Jonathan Cespedes. 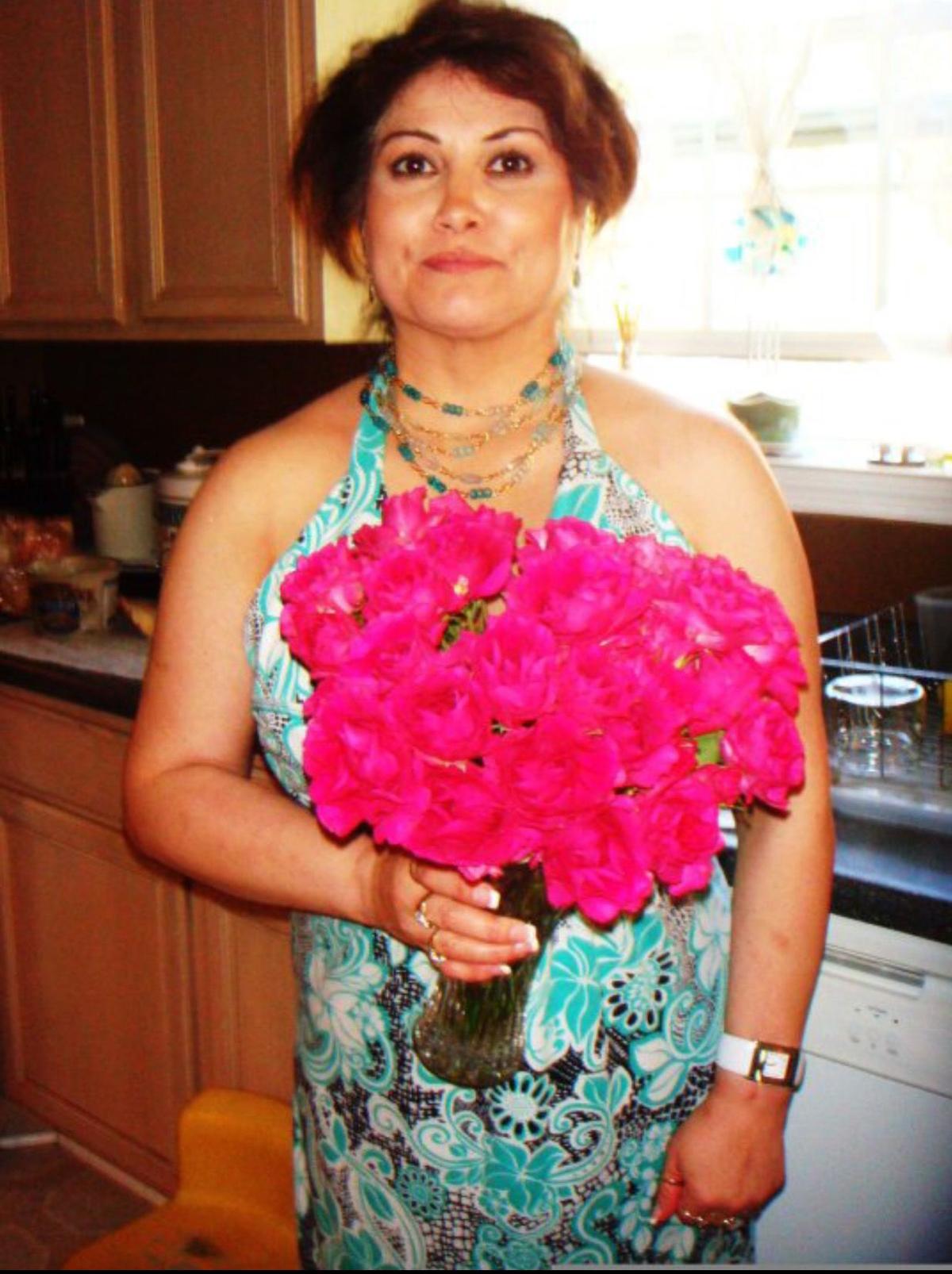 Susan Cespedes. Cespedes had three children and six grandchildren. She had recently moved to Colorado Springs from the Nashville, Tenn., area when she was arrested last fall on suspicion of a fugitive charge that was later dismissed. She died at age 55 in October after she experienced a medical episode at the El Paso County jail.

Susan Cespedes and her son, Jonathan. Susan, 55, died in October after she experienced a medical crisis while incarcerated at the El Paso County jail. Jonathan and other family members are now threatening to sue the county for nearly $5 million, saying the jail’s medical and security staff ignored repeated warning signs and her pleas for help. Photo courtesy of Jonathan Cespedes.

Susan Cespedes. Cespedes had three children and six grandchildren. She had recently moved to Colorado Springs from the Nashville, Tenn., area when she was arrested last fall on suspicion of a fugitive charge that was later dismissed. She died at age 55 in October after she experienced a medical episode at the El Paso County jail.

The family of a woman who died in October is threatening to sue El Paso County and the jail’s health care provider for $5 million, saying she would still be alive if the facility’s staff hadn’t “abandoned her in the middle of a medical crisis.”

Susan Cespedes’ cries for help went unheeded in the weeks leading up to her death, even though the jail’s medical team was aware that she suffered from diabetes, kidney disease, high blood pressure and other medical issues that could be deadly if untreated, her attorney said in a letter of claim that the county received last month.

“All this could have been prevented,” her son Jonathan Cespedes told The Gazette. “She had so much more in life to give.”

The threat of a multimillion dollar lawsuit comes as the Sheriff’s Office struggles to address lapses by its medical contractor that county officials say have subjected the jail’s inmates to “significant physical and psychological danger,” according to documents obtained by The Gazette.

There were other alleged blunders and missteps, too.

Practitioner vacancies have gone unfilled and staff members haven’t been showing up for work. In one instance, a mistake by a nurse left an inmate without prescribed medications for 10 days this year, the county said in the letter, provided to The Gazette by the Sheriff’s Office. 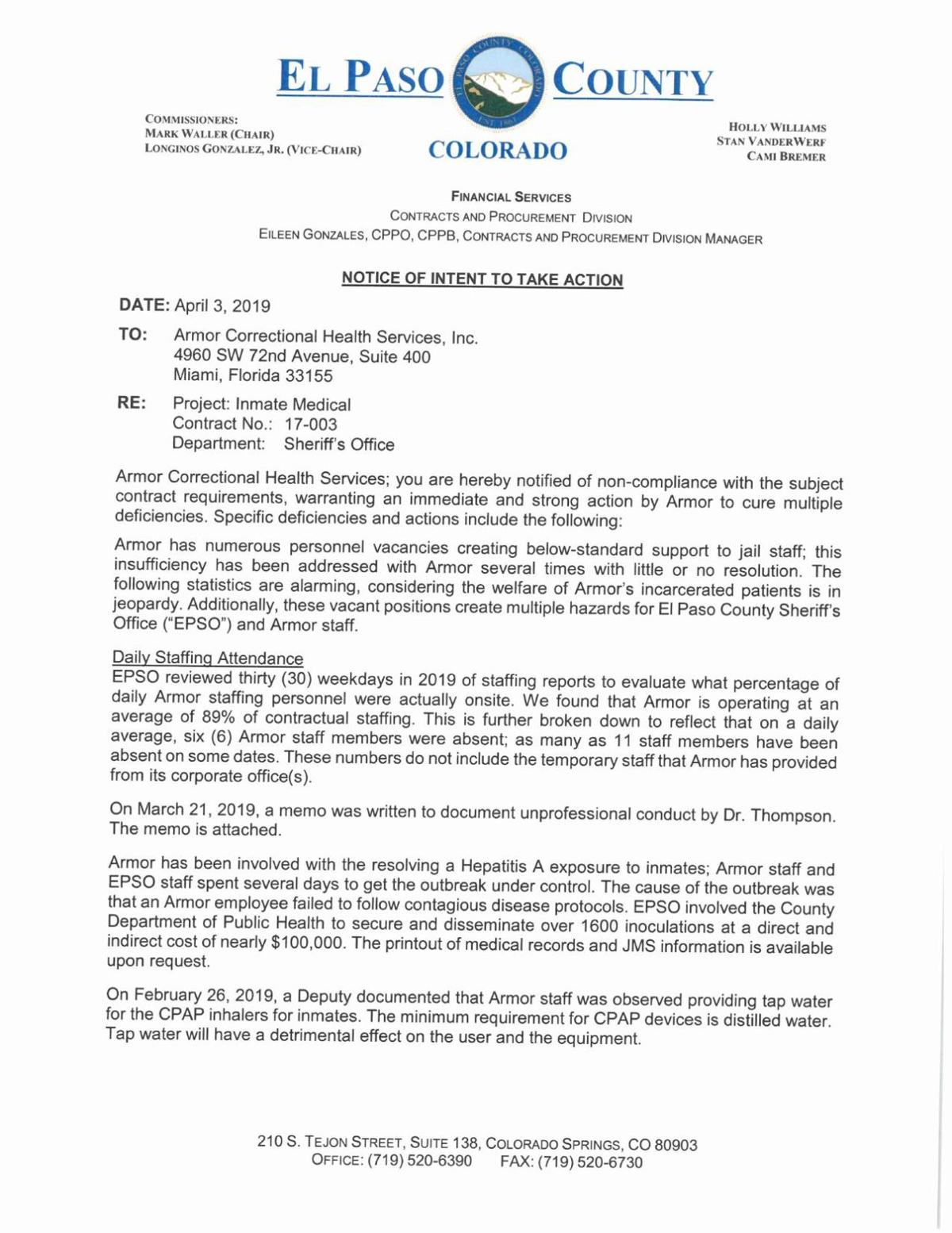 After positive tests for hepatitis A in March, the Sheriff’s Office worked with public health officials to administer more than 1,600 vaccinations to staff and inmates. The efforts cost nearly $100,000, according to the county’s letter.

Armor said in a statement that it is “committed to serving the needs of all patients in its care and takes any claim or complaint very seriously.”

Hepatitis A is hard to control because people who are infected don’t show symptoms right away, said company spokeswoman Melisa Mendez Chantres.

Two inmates who entered the jail in recent months had hepatitis A before they were booked into the facility, Chantres said.

The cases at the jail came as local public health officials grapple with a surge of the disease that’s infected more than 40 people in the county.

The county also stated that “alarming” Armor staffing deficiencies have put inmates “in jeopardy” in the April 3 letter to the company. The Sheriff’s Office reviewed 30 weekdays in 2019 and found that, on average, six members were absent each day, wrote county Contracts and Procurement Division Manager Eileen Gonzales.

On some dates, nearly a dozen employees were out, the county’s letter says. However, Armor disputed that contention.

The company attributed the staffing issues, in part, to a “nationwide nursing shortage” in an April 16 response to the county, also provided to The Gazette by the Sheriff’s Office.

At the county’s request, the company later replaced Freeman so that the Sheriff’s Office would no longer have to work with her, said sheriff’s spokeswoman Jacqueline Kirby. County officials had complained in another letter to Armor that she was unprofessional and uncooperative in efforts to address the problems.

“There continue to be discussions with Armor, with one being as recent as yesterday, which included their Chief Executive Officer and Sheriff Elder,” Kirby said in a Tuesday email.

“We are the largest jail in the State of Colorado and we remain committed to the health, wellbeing and security of the inmates at the El Paso County Jail.”

The Sheriff’s Office is working with Michigan-based Health Management Associates to find out how the agency can work with “community partners” to improve health care for inmates, Kirby said. County commissioners have approved up to $85,000 to pay the consulting firm to conduct an assessment.

The county hasn’t pursued its legal right to terminate the contract with Armor, which has cost taxpayers more than $11 million since the Miami-based company replaced its past health care provider in summer 2017.

Commissioners are set to meet with the County Attorney’s Office on Tuesday to discuss the agreement in a closed-door session.

Armor, like other for-profit players that dominate the correctional health care industry, has defended dozens of lawsuits nationwide alleging substandard care. The Gazette chronicled the claims that the company has put profit over patient care in a July 2017 article.

The county jail’s transition to Armor led to a nearly 40 percent increase in the cost of providing inmate care.

Sheriff’s officials, however, assured that the switch would provide better care for inmates.

But just months into the company’s contract, an audit of the jail in fall 2018 highlighted a litany of lapses, including a backlog of medical requests that left more than 300 inmates without prompt access to medical care. Those problems, the company has said, were left over from its predecessor.

The Sheriff’s Office threatened Armor with a $100,000 fee for contract violations that fall, and the National Commission on Correctional Health Care warned it would yank the jail’s accreditation if the issues weren’t addressed.

About a year into the new contract, the county again notified Armor, concerned that an inmate with “large open wounds” who needed to be taken to an area hospital hadn’t been referred for transport. In a response, Armor said a nurse wasn’t able to reach a doctor to discuss the situation but still directed the person to be taken to the hospital.

As problems with the jail’s health care provider have proliferated, the Sheriff’s Office has faced mounting liability.

Last year, the county received a notice of intent to sue for nearly $400,000 from the family of a woman who gave birth into an isolation cell toilet after her calls for medical attention went ignored.

In another claim letter, a man demanded up to $15 million from the Sheriff’s Office after his leg had to be partially amputated when a dog bite he suffered during his arrest festered with gangrene while he was behind bars.

The jail’s medical staff ignored red flags in the days leading up to the Oct. 18 death of 55-year-old Susan Cespedes, Denver attorney Dan Weiss alleged in the claim letter he sent to the county last month on her family’s behalf.

The El Paso County Coroner’s Office attributed her death to complications related to obesity and diabetes, including kidney failure, according to an autopsy report.

Armor, too, refused to comment on the specifics of the claim, citing patient confidentiality laws. “Our sympathies are with the Cespedes family as they grieve the loss of their loved one,” Chantres said.

Cespedes was arrested about a month before she died on suspicion of a fugitive charge that was later dismissed by the 4th Judicial District Attorney, court records show.

Weeks into her stay at the jail, her blood pressured plummeted to “dangerously low levels,” Weiss alleged. She struggled to eat.

She told her son four days before she died that she was nauseous and vomiting, with sharp pains in her right side.

When she complained to the jails’ medical staff, they only gave her ibuprofen, she said to Jonathan Cespedes during a phone call.

By the time she was taken to the hospital, her organs were failing.

Her body had gone into shock, according to the family’s claim.

“She sounded like she was aching, but I didn’t think she was going to pass away,” said Jonathan Cespedes. “Next thing you know, she’s gone.”

A driver was killed when the person's vehicle rolled about 10 a.m. Monday in southeast Colorado Springs.