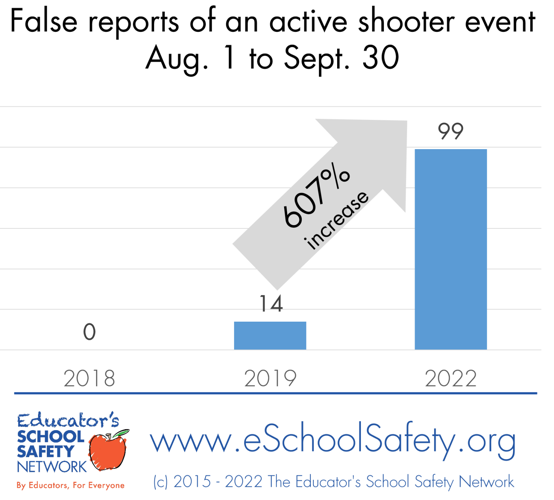 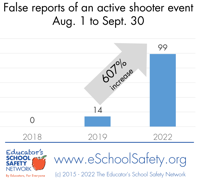 The Educator’s School Safety Network has tracked a 607% increase from 2019 to 2022 in false calls about school shooting events between Aug. 1 and Sept. 30. 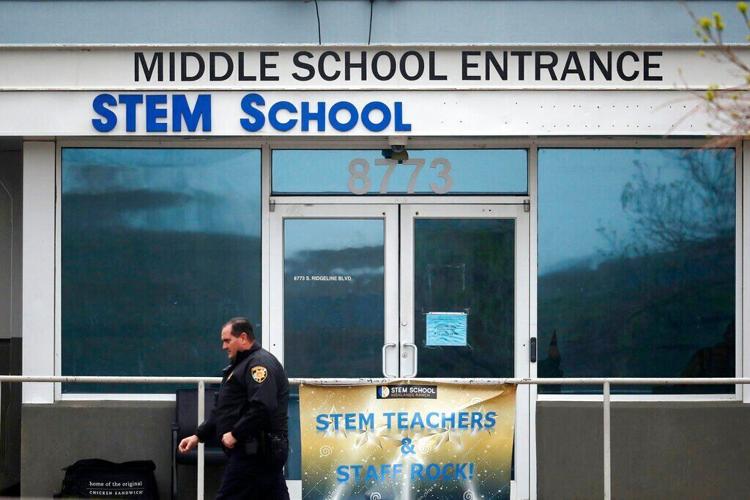 The Educator’s School Safety Network has tracked a 607% increase from 2019 to 2022 in false calls about school shooting events between Aug. 1 and Sept. 30.

In August 2012, a sophomore student disassembled a shotgun at home, brought it to school in his backpack, reassembled it in the bathroom at lunch and opened fire, injuring a classmate in the cafeteria.

It was the first day of school at Perry Hall High School in Baltimore County, Md.

In the following year, the school would get call after call of fake active shooting threats.

George Roberts, the school’s former principal at the time of the shooting, still gets angry when any school receives such fraudulent calls. Roberts said such calls retraumatize entire communities.

“When you go through an active shooter scenario, all of your senses are bombarded — your touch, your feel, your smell, your hearing, what you’re seeing,” Roberts said. “(Swatting) takes us back to the feelings we had when we went through that.”

Such calls — reporting fake school shootings or other crimes — are called “swatting.” They shut down schools, drain resources from the police, create fear and, in some instances, even result in violence.

Dr. Amy Klinger, co-founder and director of programs at the Educator’s School Safety Network, said schools can mitigate the effect of these calls.

Training, planning and communication can help prepare everyone for swatting incidents, she said, adding that, while no response to swatting will ever be perfect, preparation can make it less catastrophic.

“Every school is going to receive a false call at some point because it’s happening so frequently that schools need to be prepared for that,” Klinger said. “(Schools) can do training. They can plan. They can have conversations and discussions with their students and parents about response.”

Klinger said her group noticed a sharp increase in swatting incidents in the last few months. ESSN had been tracking incident data at schools since 2013, stopped during the pandemic, but recently resumed that operation.

“We saw very quickly that we had this incredible optic in the number of swatting incidents that were occurring, specifically false reports of an active shooter,” Klinger said. “Comparing the 2018-19 school years to this fall, it’s a really significant increase.”

The 2018-2019 school year saw 69 false reports or mock attacks out of 368 total incidents, according to data from the Educator’s School Safety Network. But from January to Oct. 28 this year alone, swatting calls stood at 175 out of 236 total incidents.

Klinger said she clusters swatting calls into three piles: calls from an individual within the school making a false report, calls from someone who saw or heard something concerning, and call surges clustered regionally or geographically during which multiple schools receive similar reports at the same time.

The vast majority come from the latter category, Klinger said.

Vikki Migoya, the public affairs officer for the FBI Denver Field Office, said swatting is a criminal activity by an individual or group that knowingly provides false information about a possible threat to life by making a call to any emergency service agency. The goal of swatting, she said, is to elicit an emergency response to an ongoing critical incident.

Hitler quoted by Colorado Springs-area school board member, board says hands are tied

“Incidents typically produce the deployment of Special Weapons and Tactics units, bomb squads, and other police units, as well as the evacuations of schools, businesses and residences,” Migoya said.

Roberts, the retired school principal, said swatting affects the ability of teachers to teach and students to learn. When a swatting call occurs, it has to be treated like an actual school shooting incident. Roberts said schools go through the protocol, notably working with law enforcement and communicating with parents.

“Focusing on learning or, as an adult, trying to teach really gets impacted because now what’s in front of you — instead of instruction and teaching — is, ‘Oh my gosh! What if it’s true?’” Roberts said. “You just get physically and emotionally tired from having to know that there are investigations going on.”

Matthew Fulford, a social studies teacher in Denver, wrote about the psychological and emotional distress of one swatting incident at this school in September, which prompted a SWAT response.

“I first realized that this was no drill when I heard sirens and crawled over to the window. In front of the school was a full-blown SWAT response with dozens of police cars and armed officers with guns drawn running towards the building,” he wrote for Chalkbeat.

“I had positioned myself between students and the classroom door where police were shouting. Instructing the students to look at me and hold hands with one another, I told them that we were all going to be fine. At that point, a second door at the back of the room flew open revealing multiple officers pointing handguns at us. This led to universal shock as none of us had ever seen that door open before,” he said.

Fulford said educators understood that so many traumatized children in one place “created a crisis of its own.”

Swatting diverts and drains resources from law enforcement, and that’s one reason why it’s so disruptive.

Mo Canady, executive director of National Association of School Resource Officers, said all incident calls have to be treated like the real thing.

“We cannot back off on our response until we know it’s not a real situation,” Canady said. “If we allow ourselves to hesitate or become complacent, that can cost lives.”

Canady said he can speculate about the reason for this surge but emphasized that concrete answers remain elusive. He said many swatting calls may be copycats — or come from people looking for attention or local students who want to see their school disrupted.

He added that many of the calls are robocalls, some of them international.

“It opens itself up to a lot of speculation and a touch of conspiracy, especially with the robocalls,” Canady said. “It’s like someone or a group testing our response systems.”

Canady said the idea that these calls may be from a person or group with the motive to test systems is merely a theory at this point, but that all angles must be considered and there’s not necessarily one set of answers.

Klinger said ESSN is not always certain who is making the calls.

“There is some conjecture that it is actors outside of the United States and that it is a way to create chaos and anxiety,” Klinger said. “That’s not unheard of for that to take place, so I think that’s clearly part of it.”

Klinger said the calls “weaponize” the fear and anxiety people already have surrounding active shooters, oftentimes making it impossible to have a regular school day.

“When students and staff believe something real may be happening, the trauma is still there to some degree as if the event were actually happening,” Canady said.

“As these things happen and there’s some debrief and recovery, student mental health really has to be paid attention to.”

Amid several calls for board members to resign and with a raucous crowd in attendance, the District 49 school board on Thursday night solidifi…