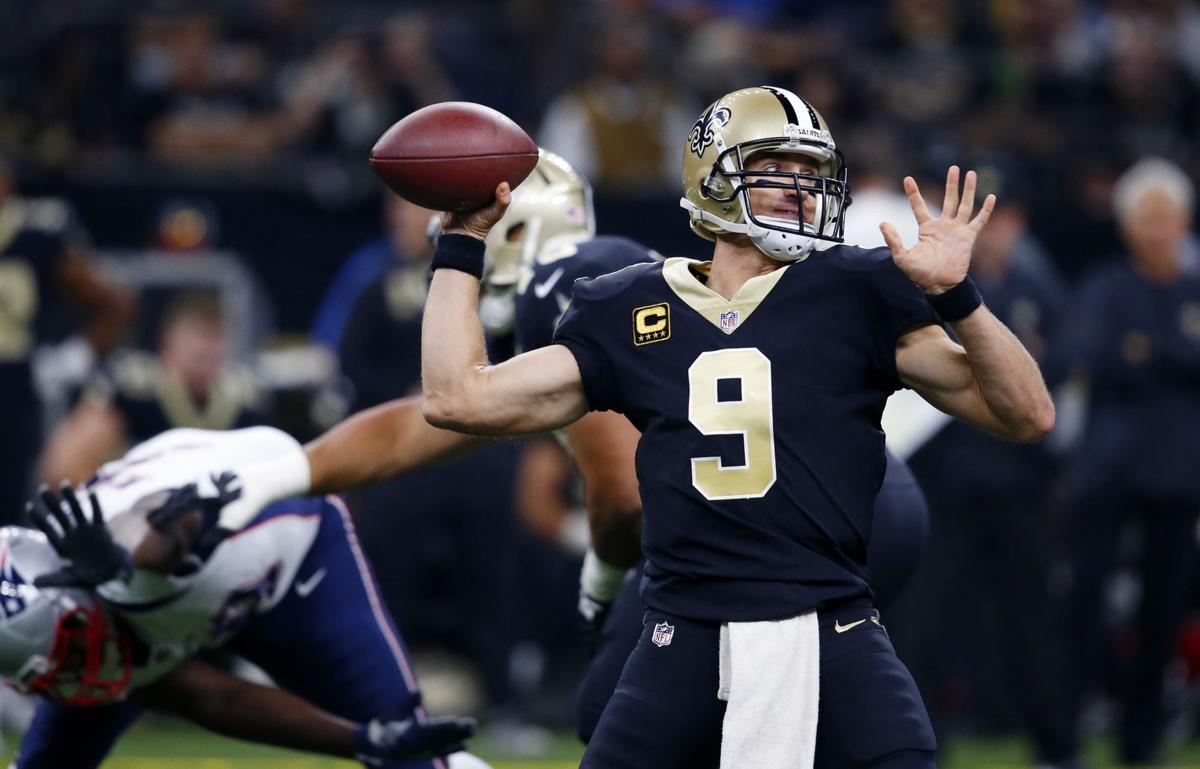 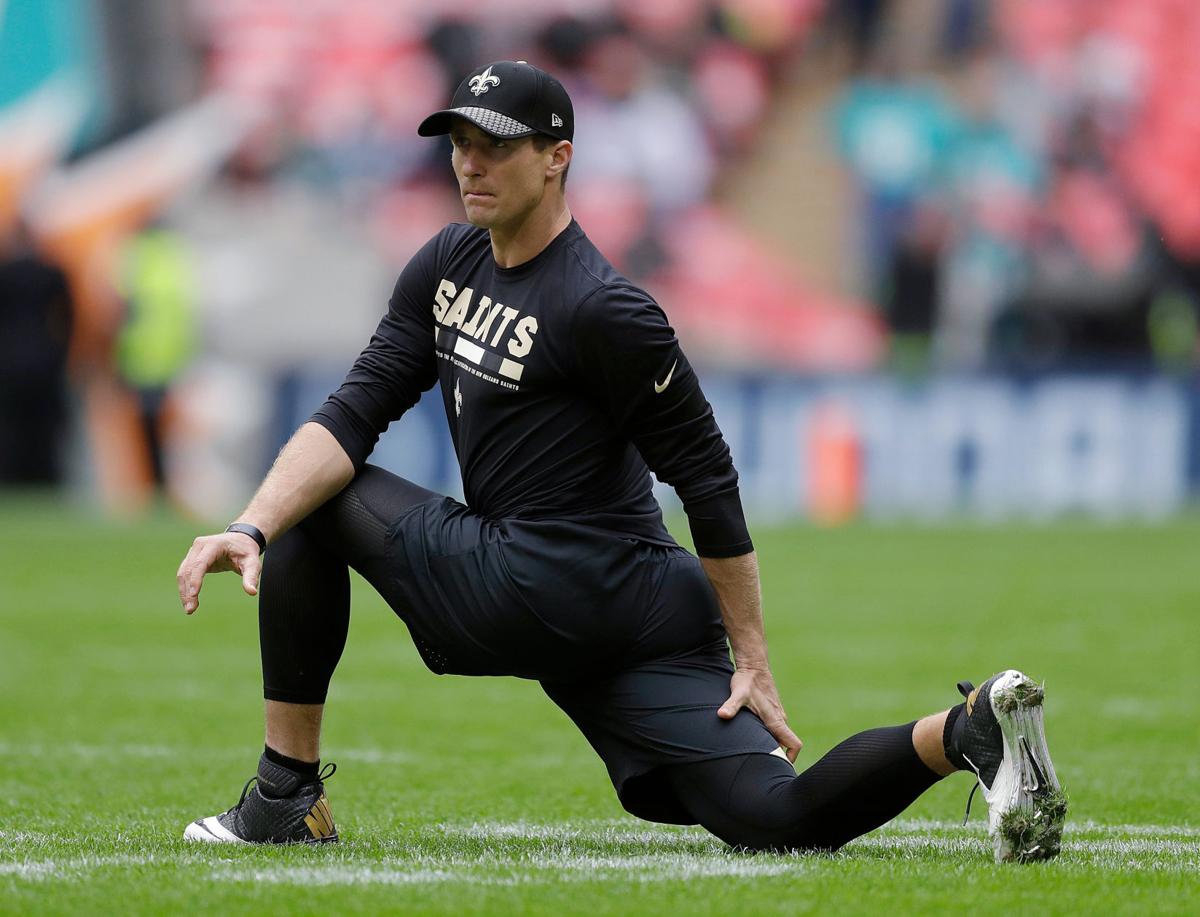 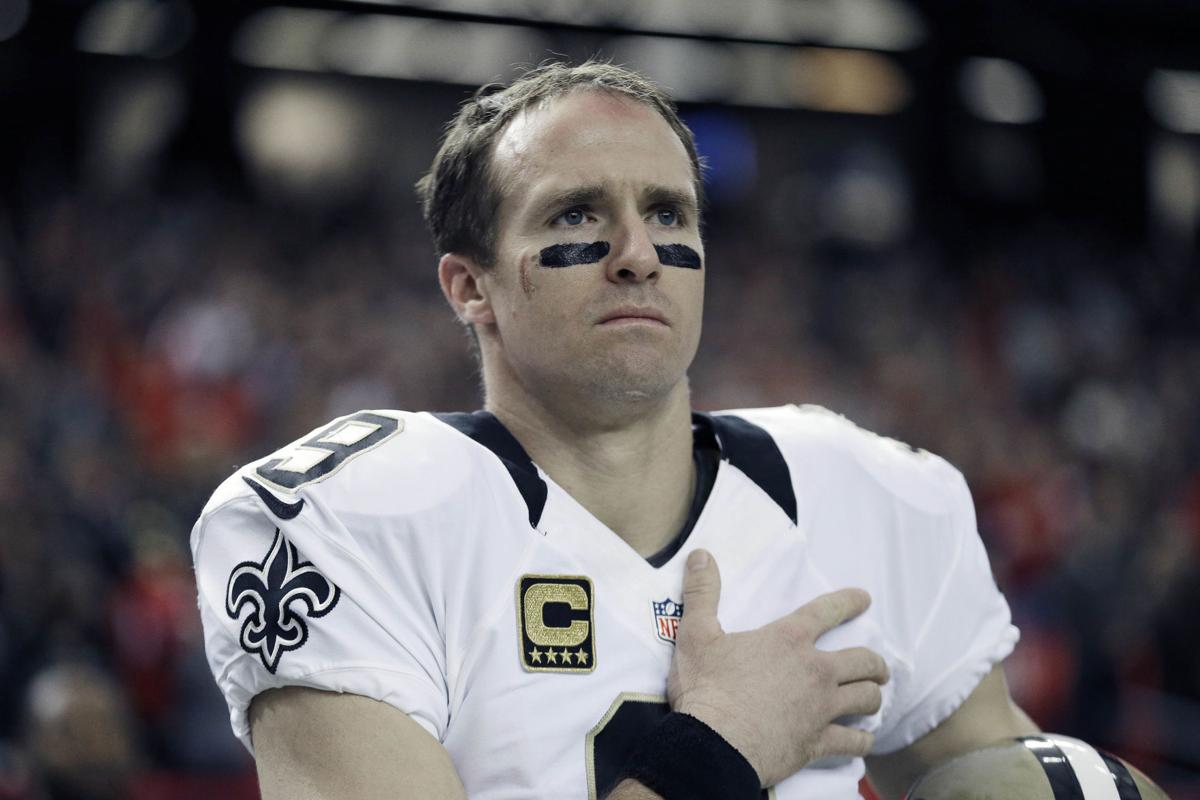 FILE - In this Jan. 3, 2016 file photo, New Orleans Saints quarterback Drew Brees stands for the national anthem before an NFL football game between the Atlanta Falcons and the Saints, in Atlanta. Brees asserts that the hefty final year of his current contract hasn’t hampered New Orleans’ ability to attract top free agents this offseason because he is committed to negotiating an extension that would improve the Saints’ financial flexibility. (AP Photo/David Goldman, File)

FILE - In this Jan. 3, 2016 file photo, New Orleans Saints quarterback Drew Brees stands for the national anthem before an NFL football game between the Atlanta Falcons and the Saints, in Atlanta. Brees asserts that the hefty final year of his current contract hasn’t hampered New Orleans’ ability to attract top free agents this offseason because he is committed to negotiating an extension that would improve the Saints’ financial flexibility. (AP Photo/David Goldman, File)

New Orleans Saints quarterback Drew Brees took to social media Thursday to air his frustration after his appearance in a “Bring Your Bible to School Day” promotional video for Colorado Springs-based Focus on the Family caused a backlash.

The short video of Brees promoting the evangelical Christian ministry’s annual event on Oct. 3 this year was posted online on Aug. 29.

“One of my favorite verses in the Bible is 2 Corinthians 5:7, ‘For we live by faith, not by sight,’” Brees said in the video. “So, I want to encourage you to live out your faith on ‘Bring Your Bible to School Day’ and share God’s love with friends. You’re not alone.”

The response on social media was immediate and largely negative, primarily because of Focus on the Family’s reputation for opposing gay rights, same-sex marriage and promoting conversion therapy in the past.

“We knew @drewbrees was conservative but it’s disappointing he’s lending his face to a video targeted at schools on behalf of a bigoted organization that presents a threat to the lives of kids who weren’t born to fit into their little Christian box,” read one tweet.

Brees told ESPN on Thursday that he was not aware the campaign had any connection to hateful or anti-gay messaging. One article that particularly incensed him said, “Drew Brees does video for anti-gay hate group,” referring to Focus on the Family, ESPN reported.

“There’s been a lot of negativity spread about me in the LGBTQ community recently ...” Brees said. “(A headline) led people to believe that somehow I was aligned with an organization that was anti-LGBTQ.”

“Why would they post something like that when it’s not representative of anything that that video was about? And to do it to a person like me who is the antithesis of what they’re trying to talk about? ... I know that there are, unfortunately, Christian organizations out there that are involved in that kind of thing. And, to me, that is totally against what being a Christian is all about. Being a Christian is love, it’s forgiveness, it’s respecting all, it’s accepting all.

“The only thing I was promoting was encouraging kids to bring their Bibles to school on national ‘Bring Your Bible to School Day,’ to live out your faith with confidence, and I gave my favorite Bible verse.”

Thursday afternoon, Brees posted a video responding to his critics. By 5 p.m., the video had more than 125,000 views and 500 comments.

“I’d like to set the record straight,” he says in the video. “I live by two very simple, Christian fundamentals and that is: Love the Lord with all your heart, mind and soul and love your neighbor as yourself. ... What does that mean to me? That means love all, respect all and accept all.”

Hopefully this sets the record straight with who I am and what I stand for. Love, Respect, and Accept ALL. I encourage you not to believe the negativity you read that says differently. It’s simply not true. Have a great day. pic.twitter.com/4RdTahE7EZ

Jim Daly, president of Focus on the Family, issued a statement later Thursday thanking Brees for his support for “Bring Your Bible to School Day” and labeling the backlash as “mean-spirited.”

“We appreciate Drew Brees’ ongoing support for Focus on the Family’s “Bring Your Bible to School Day,” Daly said.

“It’s unfortunate that mean-spirited antagonists have attempted to draw attention away from this event by mischaracterizing the beliefs and positions of our organization. Like Scripture teaches and Drew Brees referenced, as Christians, we believe we’re called to love God with all our heart and with all our soul and with all our mind — and love your neighbor as yourself.”

Daly went on to deplore critics’ efforts to silence those with whom they disagree:

“In a pluralistic nation, we all have a seat at the table. But for pluralism to work and our nation to thrive, we must respect one another’s differing perspectives, especially deeply held religious beliefs. Why do some want to muzzle those of us who espouse convictional values that are rooted in the Bible? Why do those who feel as though they have been bullied now bully those with whom they disagree?”

Focus on the Family has long been identified with the Christian right’s opposition to gay rights. Topics on its website range from “Leaving Homosexualtiy” to “Deciding Whether to Attend a Same-Sex Marriage.”