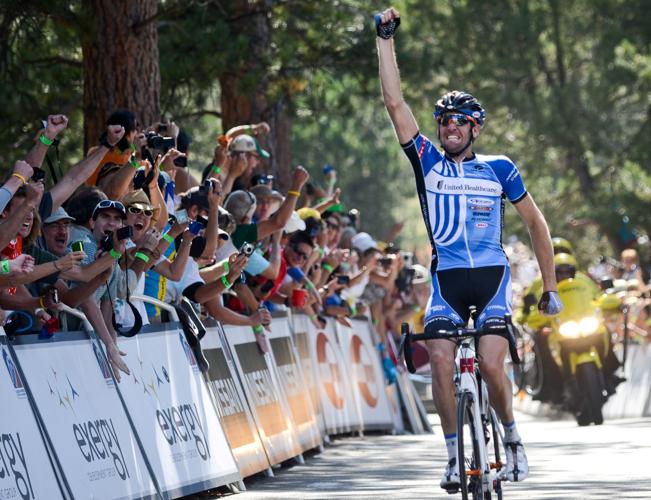 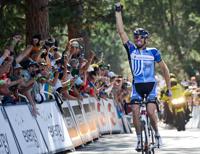 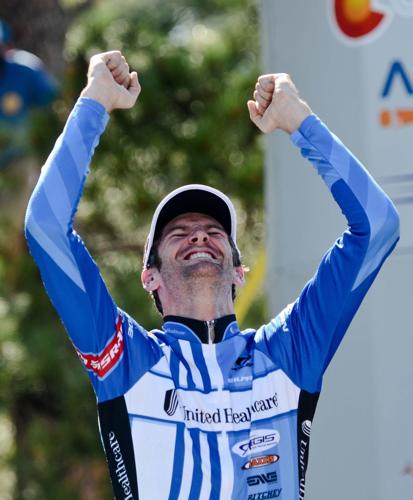 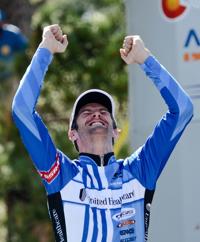 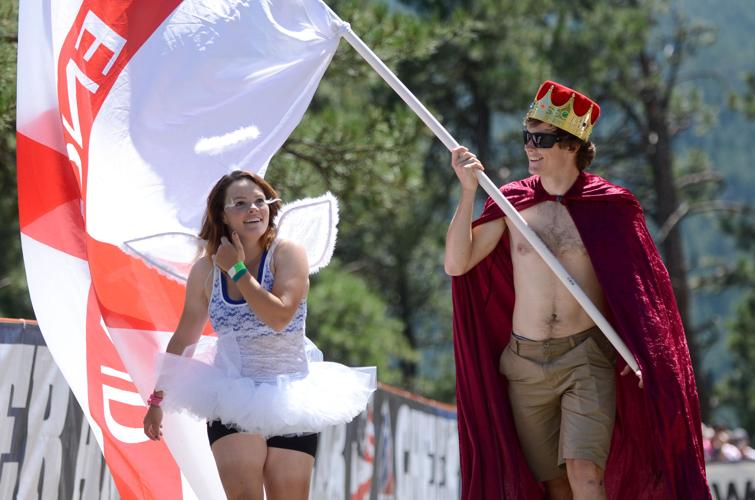 Christa Ghent and Chris Baddick walk up Flagstaff Mountain to watch the finish of the 2012 USA Pro Challenge Saturday afternoon. Although no riders in the race are from England, Baddick brought along the flag to represent his home country. Michael Ciaglo/ Photo by MICHAEL CIAGLO, THE GAZETTE

Christa Ghent and Chris Baddick walk up Flagstaff Mountain to watch the finish of the 2012 USA Pro Challenge Saturday afternoon. Although no riders in the race are from England, Baddick brought along the flag to represent his home country. Michael Ciaglo/ Photo by MICHAEL CIAGLO, THE GAZETTE

BOULDER • Engaged in a grueling climb up Flagstaff Mountain, Levi Leipheimer waited for the moment.

It’s a moment he’d planned over five hard days of the USA Pro Challenge. One he’d anticipated for more than 100 miles on this sun-drenched Saturday.

The veteran cyclist was riding closely behind overall leader Tejay Van Garderen in a pack that consisted of many of the race contenders. He was watching intently as one of them, Joseph Lloyd Dombrowski, made a move to pull away.

“I figured if Tejay isn’t jumping on his wheel right away, which would make the most sense, that means he’s hurting,” Leipheimer said.

And that meant it was time.

Leipheimer attacked, pushing his powerful legs with all the force he could muster. The crowd, which numbered in the thousands over the final three miles of the stage, pushed him to go even harder.

When the Omega Pharma-QuickStep rider eventually peered over his shoulder, he saw that no one had countered his attack. So he continued charging toward a finish that would change the landscape of this seven-day stage race.

Fifty-two weeks after winning the inaugural event in Denver, Leipheimer returns to the state capital Sunday afternoon wearing the coveted yellow jersey. His bold move in Stage 6 shook up the overall standings and paved the way for a dramatic conclusion.

“Levi hit us when everybody was at their limit,” Vande Velde said after it was over.

The attack was risky, yet calculated. And Leipheimer had the stomach — and legs — to pull it off.

“I was completely empty at the line, and that’s thanks to all the people who came out to support us,” he said.

The support was overwhelming as spectators lined long stretches of the 103.3-mile stage from Golden to Boulder that featured more than 10,000 feet of climbing. No place was that more apparent than on Flagstaff Mountain.

It had been 24 years since an international stage race came to Boulder, and the fans quickly made up for lost time. The scene was chaotic as men, women and children sprinted alongside the riders.

At some points along the route, there was barely room for a bike to pass through.

“It kind of helped the focus actually because there’s nothing you can do except just go straight, go toward the light,” Boulder native Timothy Duggan said.

Added Leipheimer: “You had to factor it into your tactics because if you were more than five positions back, you weren’t going to be able to maneuver and attack and close gaps.”

Rory Sutherland didn’t need to worry about closing gaps. The Boulder resident had the mountain to himself, making the 3.5-mile finishing ascent appear simple in winning the stage by 20 seconds.

“Knowing the climb was key,” said Sutherland, who admitted to getting goosebumps riding through his adopted hometown. “I knew you had to separate at the bottom.”

Leipheimer was the fourth rider to make it to the line, but he’ll be the last one to leave the starting station Sunday afternoon.

“I’m pleased to have this jersey on my shoulders for the moment, and I’ll wear it proudly tomorrow,” Leipheimer said. “I knew that I had to save everything for the last two days. I’m just extremely happy how it played out today. I gave it everything I had.”