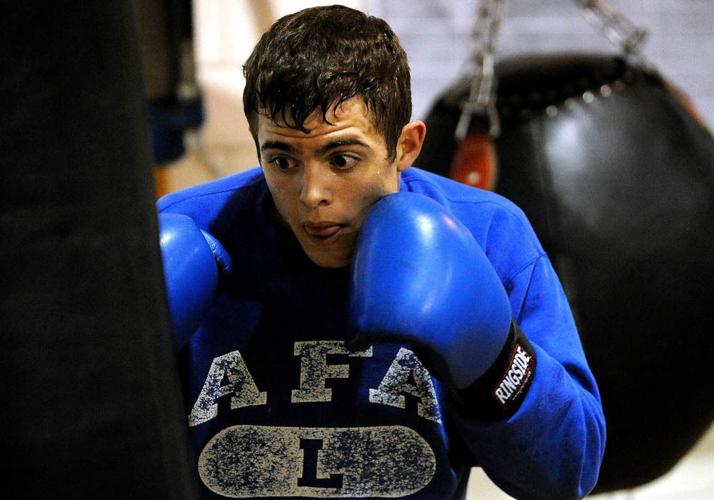 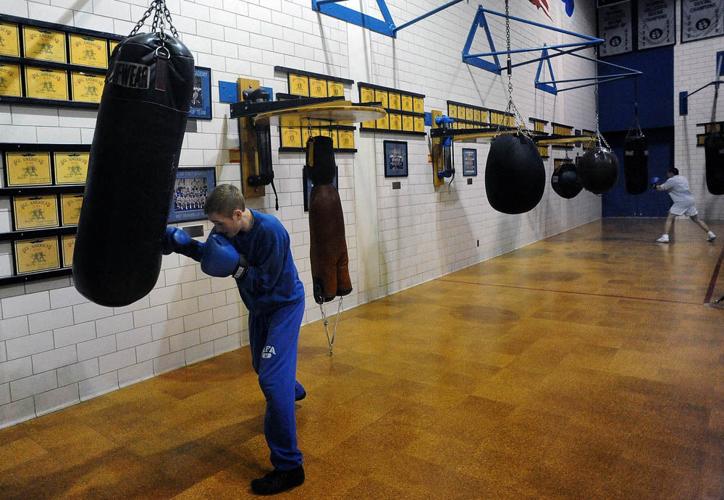 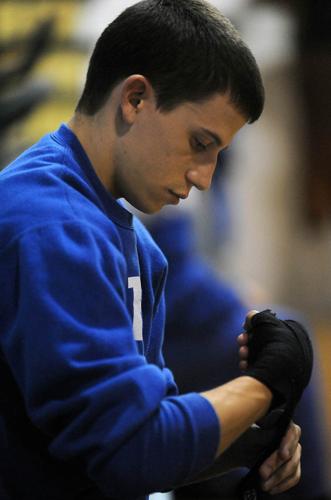 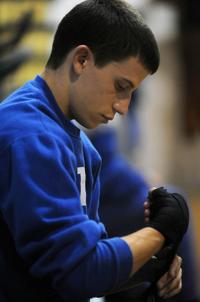 Air Force 132-pounder Mike Mizes tapes his hands before practice Tuesday, March 30, 2010. The team was preparing for next week's national championships at Army. (The Gazette, Christian Murdock) Photo by CHRISTIAN MURDOCK, THE GAZETTE

Air Force 132-pounder Mike Mizes tapes his hands before practice Tuesday, March 30, 2010. The team was preparing for next week's national championships at Army. (The Gazette, Christian Murdock) Photo by CHRISTIAN MURDOCK, THE GAZETTE

A year ago, Air Force boxer Dalton Hall was an also-ran in his weight class at the academy.

Now, Hall is a regional champion three victories from a national title.

“He’s a different kid,” Air Force boxing coach Eddie Weichers said. “Came back with a different attitude. … Last year he was so-so, and this year he’s got a big ‘S’ on his chest and you need kryptonite to stop him.”

So far this year, Hall, a junior southpaw from Boonville, Mo., has compiled a 9-1 record and won the 165-pound titles at the academy’s Wing Open and the National Collegiate Boxing Association West Regional Championships in San Francisco.

Now he’ll help the Falcons in pursuit of the NCBA national championship on the Army campus in West Point, N.Y., April 8-10.

Air Force has won 18 of the past 30 NCBA national titles but hasn’t claimed one since 2004, when it captured its sixth in a row. This year’s team seems ready to knock off two-time defending champ Army, however. The Falcons qualified a boxer in each of the tournament’s 12 weight classes and boast seven regional champs.

“It’s absolutely imperative that we win,” Hall said. “We haven’t had the title here for quite some time now, and it’s time to bring it back. We’ve got the stars aligning the way we want them, we’ve put in our time, work, everybody’s in pretty good shape, and it’s our year to do it.”

It certainly has been Hall’s year so far.

A football player and wrestler in high school, Hall first put on the gloves late in his freshman year when he took the academy’s boxing class – which all male cadets must complete. He went out for intramurals his sophomore season but went just 2-4 in bouts and lost in the 165-pound quarterfinals of the academy’s Wing Open to then-freshman Casey Habluetzel.

But Hall worked hard over the summer, building strength in the weight room and speed in the ring. While he admitted he’s not “a real pretty boxer” and is “more like a bulldozer – I’m gonna come straight at you and keep pushing it,” he has become more technically sound. His defense is better, his combinations are crisper and his punches are straighter.

“I think last year I threw a lot of loopy, weird stuff,” he said. “And took way too many.”

Hall also has benefited from the boost in confidence provided by his victory at the Wing Open. He won a loaded division that included Habluetzel and Nick Cataldo, the outstanding boxer at the 2009 Wing Open.

“My old coach used to say there’s a metamorphosis that happens after you win your all-college championship,” Weichers said. “You walk with a different swagger, your chest is out a little farther, and you have the self-confidence. I think what happened with Dalton. … He took that confidence to regionals, and the results are evident.”

Indeed, Hall won the regional title in impressive fashion and was named the tournament’s most outstanding boxer by officials.

“He was just a wrecking machine and had a great tournament,” Weichers said.