The outbreak is one of the newest in a prison in Colorado where inmates live in close quarters and outbreaks have grown rapidly sickening hundreds.

At the Crowley County Correctional Facility in Olney Springs, 96 of the 162 inmates that have tested positive are currently ill, according to the Department of Corrections.

Nine employees at the Crowley County prison have tested positive, with six having already returned to work, said Ryan Gustin, a spokesman for CoreCivic, the company that manages the facility. He declined to say how many inmates are  housed at the prison, but it is designed to hold 1,790, he said.

The Department of Corrections reports 202 of the inmates are currently sick at the Fremont County prison. One inmate has died.

The agency's Executive Director Dean Williams said in a letter to families dated Oct. 29 that to prevent the spread of the virus many inmates "need to shelter in place in their cells." He also said that access to phones and video visitation may be limited to help prevent the spread. The measures were taken along with quarantining inmates based on exposure, requiring masks and limiting socialization to smaller groups, he wrote.

"Once the medical experts believe it is safe for us to loosen restrictions, we will do so," he said. 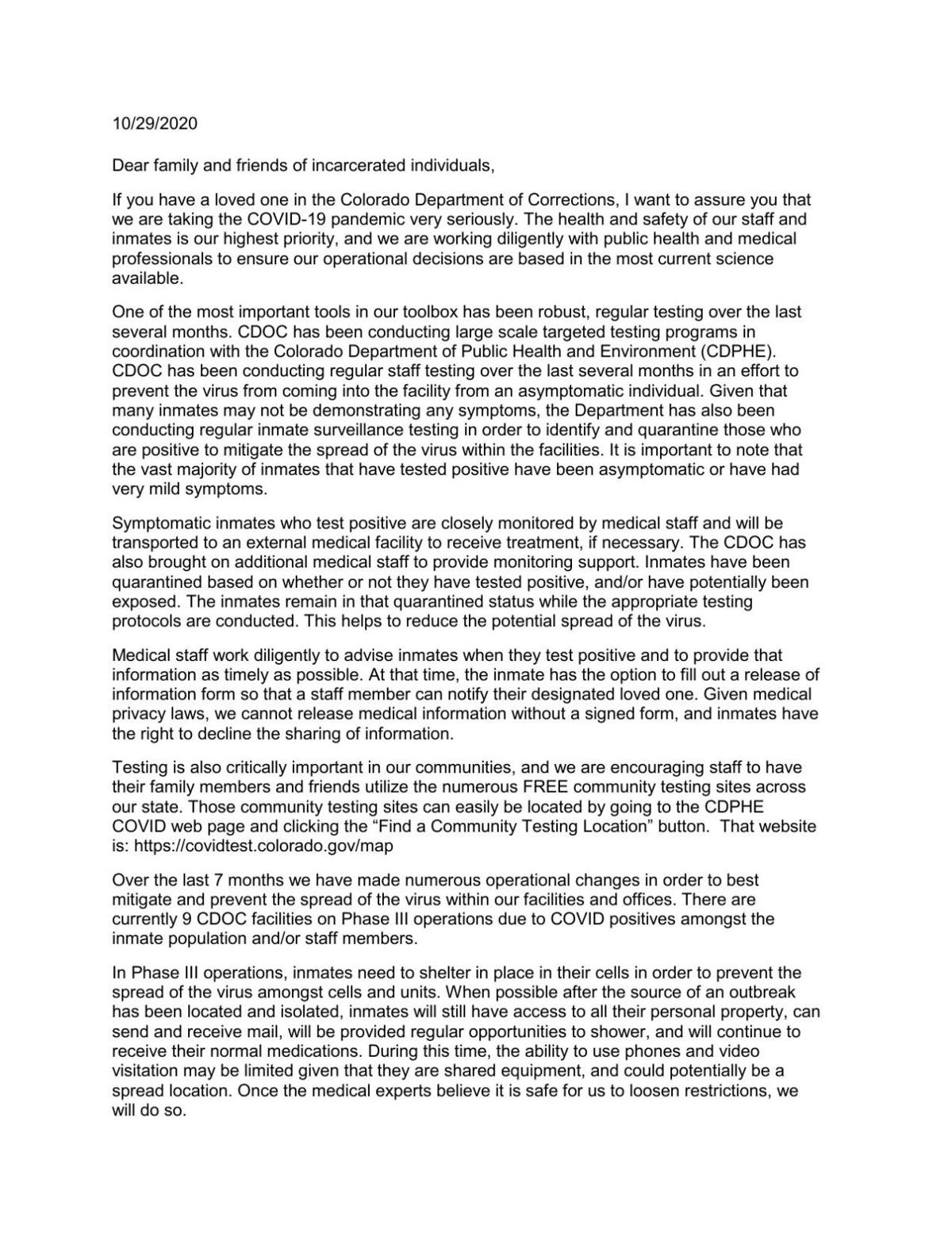 CoreCivic is working to keep inmates safe in Crowley County by screening those who are at high risk of COVID-19 and isolating them, the company said in a statement. The company is also screening workers for fevers, encouraging social distancing and increasing its cleaning.

However, some of the steps taken at the Fremont County prison have seemed extreme to Susan Kasperbauer, fiancee of inmate, Benjamin Vivian, she said.

Kasperbauer said she is concerned about how hard it's been to communicate with Vivian, how long inmates are kept in cells and poor communication from the agency. Kasperbauer has heard about problems in the prison mostly through letters she received from Vivian, because phone calls were not allowed for most of October, she said.

"I’ve never heard him so concerned about how they are handling the inmates," she said.

Vivian is among those who has been kept in his cell for three days at a time and only allowed out for 20-minute showers, she said.

"That's highly unusual. ... Isolation in prison is cruel," she said.

Vivian has also not received treatment for an infected tooth, beyond ibuprofen and a Z-Pack, a general antibiotic treatment, which has not been enough, Kasperbauer said. Also, neither Vivian nor Kasperbauer have been informed of Vivian's COVID-19 test results, she said.

"My number one concern is treatment of inmates that are sick," she said.

Kasperbauer said she has tried to contact the Department of Corrections about her concerns for several weeks and never heard back, which is also unusual.

In Williams letter, he said the staff has limited ability to answer the public's questions, but family members of the incarcerated should direct questions to cdoc@state.co.us or 719-226-4569.

Colorado has identified 13 new coronavirus outbreaks within its constellation of jails, prisons and halfway houses in October, as the state grapples with widespread transmission of the disease.