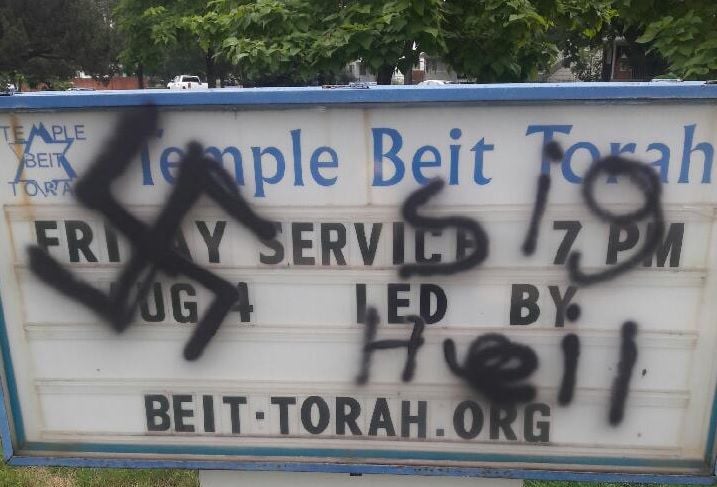 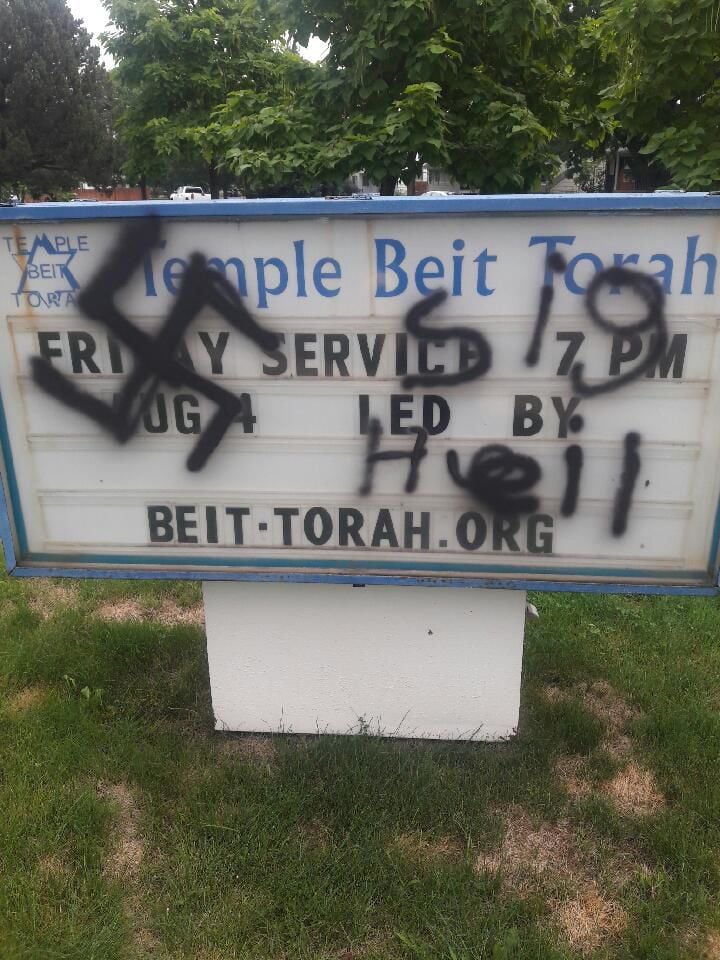 Based on the numbers, hate is not spreading in Colorado.

FBI statistics show hate crimes in the state remained flat in 2016 compared with 2015, and Colorado Springs police figures showed them plummeting so far this year.

That's the reality, but the perception persists that hate is more prevalent in the community than ever, amplified by media attention and social media and further fueled by recent attacks around the country that have targeted churches, protesters and homosexuals.

Two weeks ago, a black teen at Cheyenne Mountain High School had his face superimposed on a meme that also was manipulated to include a knife and the words, "Around Blacks Never Relax." It was distributed on Snapchat and in text messages, leading the student responsible, who has been described as Hispanic, to face expulsion and criminal charges. Police said they are investigating the posting as a possible bias-motivated crime.

As similar stories continue to surface - and not all of them rise to the level of a crime - Anti-Defamation League Associate Regional Director Jeremy Shaver warns not to put too much stock in the numbers. Statistics only serve as "a snapshot" of hate in a community, they don't always tell the full story, he said.

Hate crimes in Colorado Springs are on track for a five-year low, with five crimes reported and confirmed through September. Two attacks targeted Jewish places of worship and three others were racially motivated. In previous years, hate crime totals reached double digits, though no more than 14 have been confirmed in a given year.

El Paso County numbers also show a decline, falling from six in 2015 to two last year and one so far this year: Vandals targeted a Peyton home in February, smearing dog feces across the garage, peppering the home with about 40 eggs and posting about 50 hate messages and racial slurs toward "brown or Indian" people.

What is going up is the percentage of attacks against the Jewish faith, which could be a red flag for the rest of the community, experts say.

Records show religion is not a main motivator behind hateful acts in the city, yet there were two anti-Semitic acts this year, the most since at least 2013 (only one incident was reported and confirmed in 2015): A "Fight Terror, Nuke Israel" sticker was placed on the front door of the Chabad-Lubavitch of Southern Colorado Jewish synagogue in June; and a swastika and the words "sig (sic) heil" - for "sieg heil," a Nazi salute - was scrawled on the side of the sign outside Temple Beit Torah in August. The "n" word also was painted across the sides of vehicles in the area.

The local spike mirrored Colorado overall, with the ADL reporting this month that anti-Semitic incidents doubled the first nine months of 2017, compared with 2016. In that span, there were 46 incidents reported against Jewish individuals, synagogues and schools, up from 23 the year before. Numbers also doubled from 2015 to 2016, ADL said.

While the two incidents hardly classify as an epidemic, ADL Mountain States Regional Director Scott Levin warns, "Anti-Semitism is often a bellwether for hate in a community."

"We know that the Jewish community is not alone in experiencing a significant increase in hate incidents and hate crimes," Levin said in a news release this month. "Refugees, immigrants, Muslims, LGBTQ individuals, Latinos and African-Americans are also experiencing increased incidents of hate."

If that's true, Colorado Springs victims aren't reporting it. Police records show hate acts increased only against the Jewish population this year, and it's not the typical target.

One or fewer reports of bias against bisexual/transgender individuals, Christianity, Islam, other ethnicities or national origins or "other religions," was reported in the last five years, according to police records. At the same time, there were 13 anti-homosexual acts reported, with 11 confirmed; 30 anti-black acts, 19 confirmed; three reported and confirmed anti-Hispanic acts; and 10 anti-white, four of which were confirmed. There also were seven hate crimes reported in 2016, three confirmed, in which the specific bias was "unknown."

But "numbers lie," according to Colorado College Feminist and Gender Studies Professor Heidi Lewis. They rely on victims reporting the crime, she said.

Sometimes people don't report because they're embarrassed or fear retaliation. Sometimes they worry about exposing themselves, especially in cases where victims are undocumented. But Lewis argues that most people, especially those of color like herself, don't report because they "don't have confidence that reporting a particular crime to the police will result in the kind of justice that one would seek."

Lewis said she hasn't reported at least five racially-motivated actions directed toward her over the years, including in 2012 when a man at a gas station commented on her loud music, saying "you people never learn." The Gazette is aware of at least one other racial incident in the city that recently went unreported.

A typed letter filled with derogatory references toward blacks was posted to a family's door on Scotch Pine Drive in September. The letter, later posted on a Facebook forum, criticized the family's 20-year-old son, who is white, for befriending black peers, calling them the "n" word and claiming that black males "bring crime and violence with them wherever they go."

"Eventually they will draw your son onto prison or death," the note said before warning "in order to keep the neighborhood and my family safe I will call the police every time I see them."

It's unknown why the mother did not report the note to police - she initially agreed to speak to The Gazette but later did not return calls.

Lewis also worries that interpretations of hate crimes by law enforcement could be skewing numbers.

Police are bound by Colorado law, which defines a bias-motivated crime as one where the perpetrator knowingly intends to intimidate, harass or physically harm another person because of that person's actual or perceived race, color, religion, ancestry, national origin, physical or mental disability, or sexual orientation. Hate itself is not a crime and is protected under freedom of speech and other civil liberties.

Police spokesman Lt. Howard Black said officers must prove the bias through investigation. "Knowingly" aiming to intimidate or harm is the key, he said.

"We stand by our numbers," Black said.

The reports also aren't a complete picture for the state. Only 37 of Colorado's 244 law enforcement agencies reported hate crime stats. The remaining agencies either reported zero incidents or failed to report at all, including five Colorado cities with populations of more than 100,000: Arvada, Lakewood, Greeley, Thornton and Westminster. "It's very unlikely that in a community that size there were zero incidents," Shaver said, adding numbers may not be credible.

The ADL reported "a distinct increase" in anti-Semitic attacks after the August "Unite the Right" rally in Charlottesville, Va., in which white nationalists and neo-Nazis clashed with counter-protesters. Ultimately, a car driven by a man associated with a white nationalist group sped into the protesters, killing one person and injuring dozens.

But hate crimes had been trending up since 2015, peaking after the 2016 election as "public discourse coarsened" and individuals and groups "felt empowered and emboldened to move from their bigoted belief into action," Shaver said. The movement was in stark contrast to the decade prior in which hate crimes consistently declined, he said.

Though the increase coincided with the election of Donald Trump as president, it's "not fair to lay that increase solely at the foot of the (Trump) administration," Shaver said. Many other factors come into play, including the long-term political debate on immigration reform in the U.S. and the economic downturn in 2007-2008, which created turmoil and uncertainty, Shaver said.

Shaver does criticize Trump and his administration for failing to quickly denounce and distance themselves from extremist movements and individuals.

"We're looking to the administration and all of our elected officials to provide some moral leadership during this time," Shaver said.

The ADL also praised the Air Force Academy for its quick and firm stance against intolerance after racial slurs recently were scrawled outside the rooms of five African-American cadet candidates. Investigation later showed that one of the victims was actually the perpetrator, but "the fact that you made clear your better idea to all of the cadets at USAFA and did so surrounded by your command staff and educators, spoke volumes," Levin said.