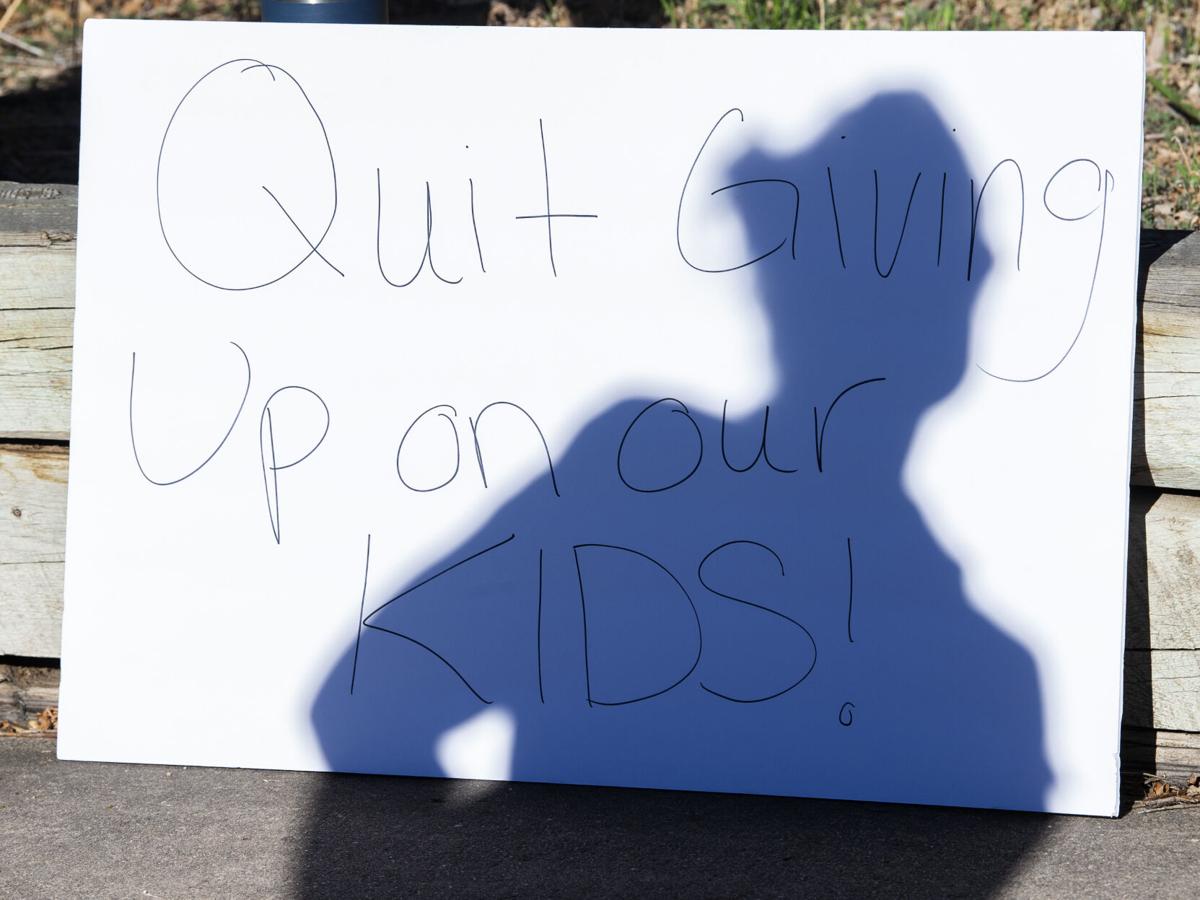 to protest the return to remote-only learning at some local schools, including Coronado and Palmer highs schools, due to rising COVID-19 cases. 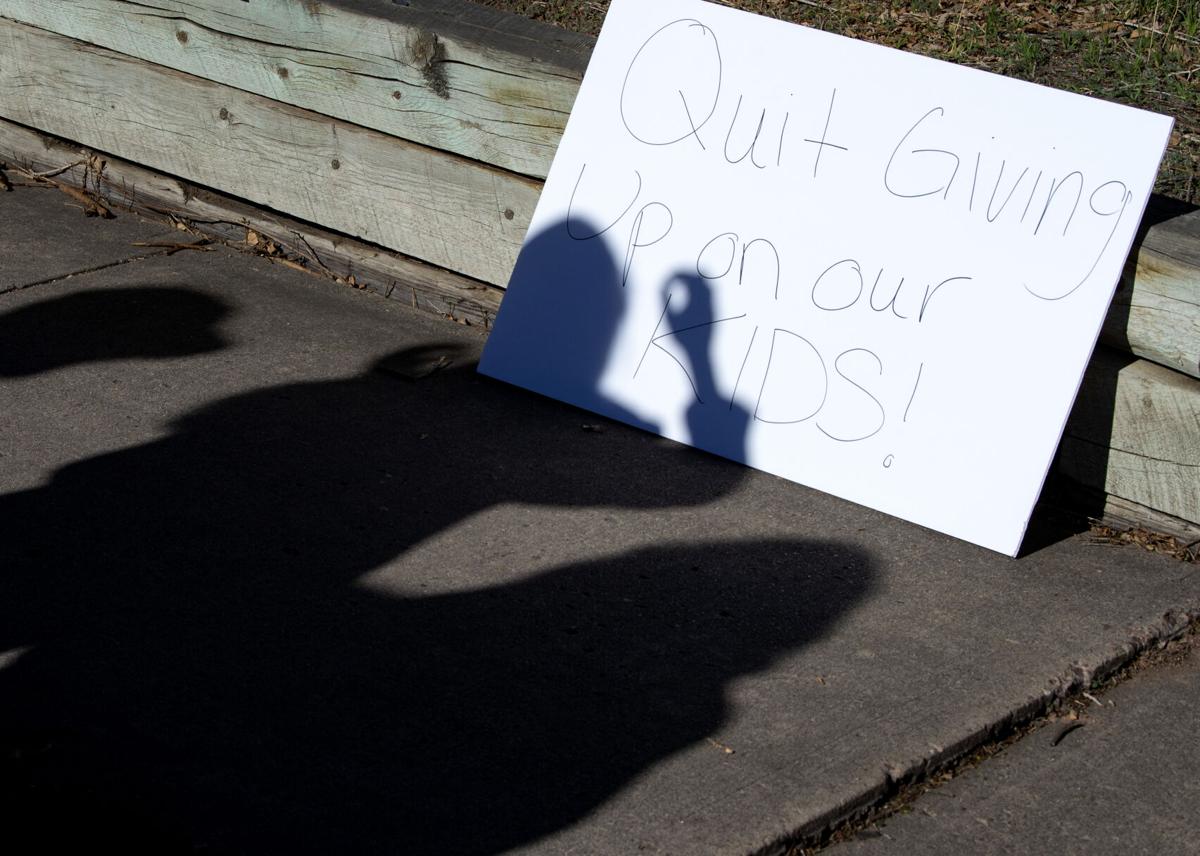 to protest the return to remote-only learning at some local schools including Coronado and Palmer highs schools due to rising COVID cases.

to protest the return to remote-only learning at some local schools, including Coronado and Palmer highs schools, due to rising COVID-19 cases.

to protest the return to remote-only learning at some local schools including Coronado and Palmer highs schools due to rising COVID cases.

Fifteen-year-old Aimee Wright was sitting in her last class on Thursday when she heard Coronado High School was switching back from in-person learning to remote instruction on Friday.

“We were just about to put on a play and did the opening and closing night yesterday, but we can’t perform tonight or tomorrow,” she said Friday at a protest in front of Colorado Springs School District 11’s administration building.

“At first I was angry, and now I’m just sad,” she said. “I don’t think any of this is for our safety. There doesn’t seem to be any reason.”

“Our youth positivity rate is higher than the state,” she said the Colorado Department of Public Health and Environment told the district Friday morning. “We’re seeing levels like we did in the fall.”

D-11 had 79 active positive cases as of Friday, according to its COVID dashboard, with daily known infections reaching levels the same as its peak in November.

“We’re empathetic to the situation,” Ashby said. “We know kids have had a very difficult time, and we’re doing the best we can for the safety of all of the families.”

Coronado High is one of seven D-11 schools that have closed for live instruction because of the number of infections, she said.

Some, including North Middle School, have had entire grade levels return to remote lessons in recent weeks, and others have closed to in-person instruction and reopened, Ashby said.

The decision, in part, is to help ensure seniors from the district’s four traditional and four non-traditional high schools have live, in-person graduations, Ashby said. Outdoor ceremonies are scheduled for May 18-21 D-11’s Garry Berry Stadium, with six guests per graduate.

Seniors aren’t happy, though, that sports have been put on hold under remote-learning protocols, and traditional end-of-year activities, such as prom, music performances and awards ceremonies, are being postponed or going remote.

“Heck, this my senior year — it’s a once-in-a-lifetime thing,” said Coronado senior Travis Wright. “It really doesn’t feel like we’re a priority at all.”

“Remote learning is taking a good chunk out of our school year,” he said. “We won’t return to school until May 10, and seniors’ last day is May 11. Everyone’s kind of disappointed.”

The district’s intent is for schools to have proms, Ashby said, adding that some have been “pushed back.”

Hurt says he understands the safety aspect, but the number of COVID cases don’t seem to justify the negative impacts to thousands of students.

“There is so much at the end of the year that we were looking forward to,” he said. “Online you don’t get as much out of the material, and it’s a lot harder to focus.”

Remote learning is “half school, half video games,” said Scott French, whose son, Deric, is a freshman at Coronado.

“We were remote, hybrid, in-person, then they kick us back to remote,” Deric French said. “It’s unfair to kids.”

Deric and some of his classmates were quarantined for two weeks because of exposure to the virus and returned for three days this week, only to be sent back home. So he’ll be out almost an entire month, his mom, Angela French, said.

“Let’s get our kids back in school and keep them in school,” she said.

Shannon Rogers, a D-11 parent of two Coronado High students and an alum, organized the protest because she said she hasn’t seen other school districts revert to remote learning recently.

However, "We will continue to monitor each school and make decisions as necessary," she said.

The possibility is not off the table in Academy School District 20. Nearly 220 students were sent home to quarantine this week, said spokeswoman Allison Cortez.

“If we have a situation where staff and students are profoundly impacted by quarantines and we cannot safely operate a school, we would have to move that school to e-learning,” Cortez said.

“During the final few weeks of school, we hope this is not the case, but COVID has taught us we cannot predict the future.”

Rogers said she would have preferred to see options for D-11 schools, such as keeping the seniors in class and sending other students to learn at home, or going back to a hybrid model of part in school, part at home — or having parents who are worried keep their students home.

“This is not a political rally — we know the seriousness of COVID,” Rogers said. “They just had one more week to have that last play, band concert or game, and it still would have been two weeks before graduation. I don’t feel like it’s adding up.”

School positivity rates have been climbing statewide, according to public health statistics.

The virus is spreading in D-11 both from people bringing it into school and contracting it at school, said Cory Notestine, executive director of student success and wellness. Higher levels of transmission also are occurring, he said, with more outbreaks than in the fall.

Decreases in positive cases will help get kids back in school, said Dan Hoff, executive director of school leadership.

Despite objections, masks here to stay in Colorado Springs schools, even for most younger students