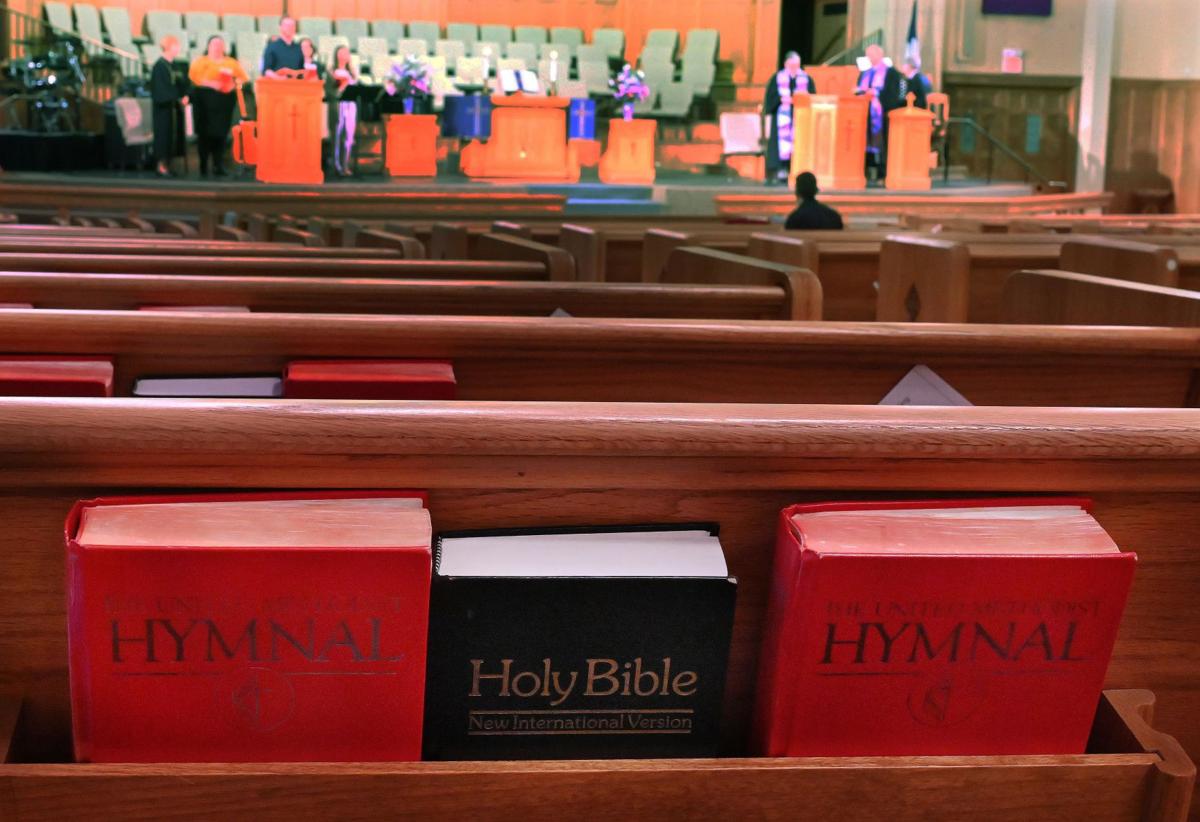 There was a church full of hymnals and Bibles, but no people during the broadcast of First United Methodist Church. (Photo by Jerilee Bennett, The Gazette) 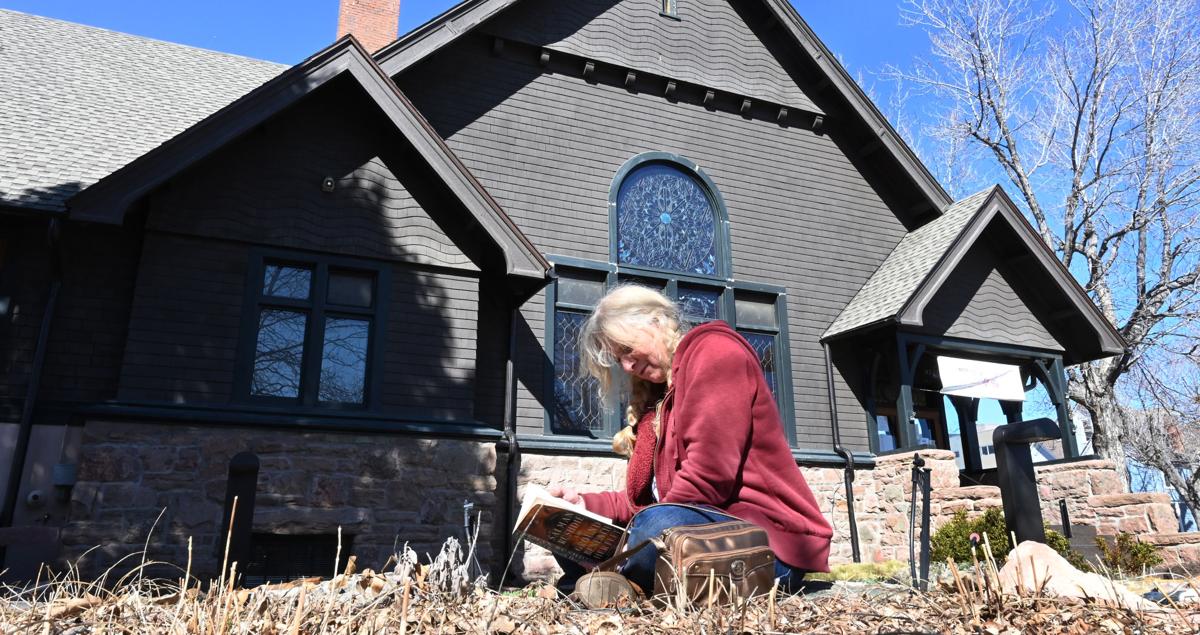 Grace Anne Milburn said she went to three churches on Sunday and couldn't find any open, but found a spiritual book in a kiosk at the All Souls Unitarian Church on Sunday, March 22, 2020, and was hanging out on their front lawn while reading the book. Milburn is homeless and gets her news mostly from word of mouth or the radio. (Photo by Jerilee Bennett, The Gazette) 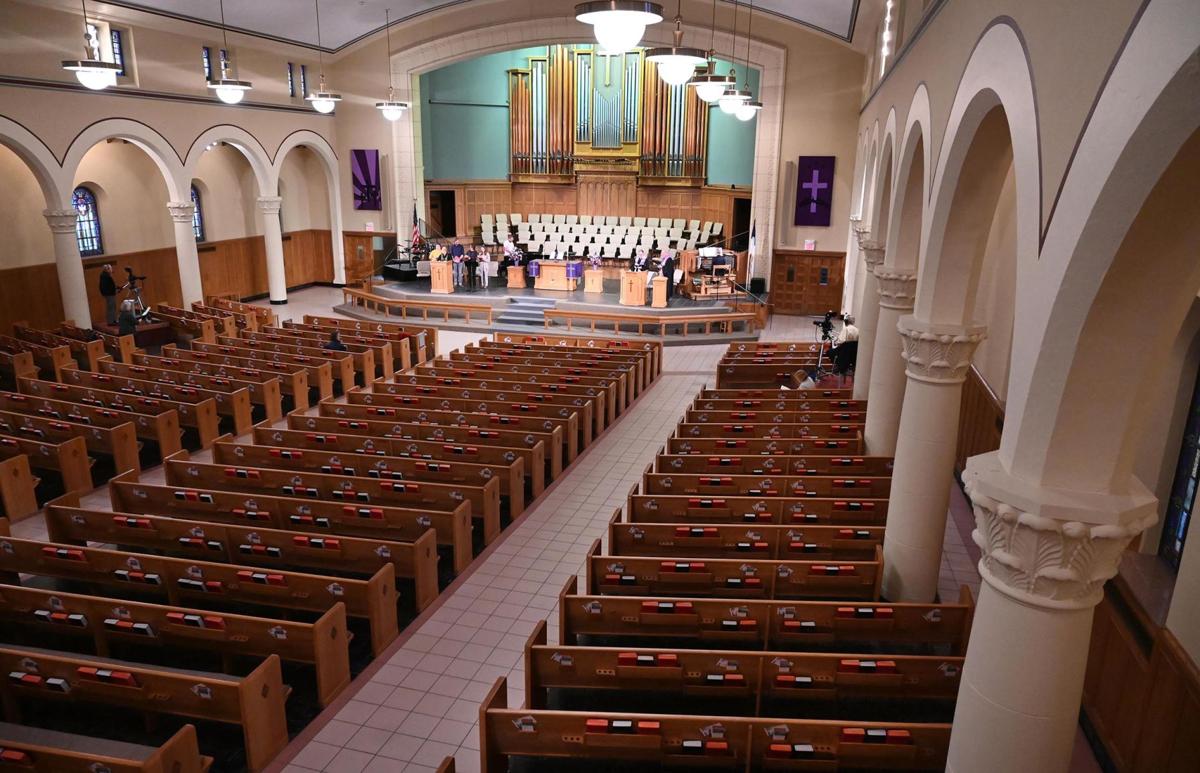 There was no congregation at First United Methodist Church on Sunday, March 15, 2020, due to the COVID-19 virus. The were televising to their congregation at home. (Photo by Jerilee Bennett, The Gazette)

There was a church full of hymnals and Bibles, but no people during the broadcast of First United Methodist Church. (Photo by Jerilee Bennett, The Gazette)

Grace Anne Milburn said she went to three churches on Sunday and couldn't find any open, but found a spiritual book in a kiosk at the All Souls Unitarian Church on Sunday, March 22, 2020, and was hanging out on their front lawn while reading the book. Milburn is homeless and gets her news mostly from word of mouth or the radio. (Photo by Jerilee Bennett, The Gazette)

There was no congregation at First United Methodist Church on Sunday, March 15, 2020, due to the COVID-19 virus. The were televising to their congregation at home. (Photo by Jerilee Bennett, The Gazette)

The Rev. Nori Rost did a doorbell ditch of sorts Thursday. She rang doorbells at 10 homes of All Souls Unitarian Universalist Church members, left a teddy bear on the stoop and ran back to her car.

“Somebody said they miss the hugs, so I’m sending All Souls bears,” said Rost, the church’s minister. “We have to come up with creative ways to touch people’s hearts.”

Part of the new normal for Cascade theologian and Christian book author Linda Seger is praying on the phone with Quaker friends about the difficulties the coronavirus has brought.

“It’s such a strange time because usually you don’t separate from one another,” she said. “The question is how do we stay in touch to help each other and also receive help.”

In the wake of the abrupt halt to daily routines, Jim Daly, president of Colorado Springs-based Focus on the Family and host of its daily radio broadcast, has been practicing what he preaches.

“As we are sequestered in our homes, it’s a great time to pull out board games,” he said, adding that’s what his family has been doing.

“In the midst of this understandable panic, we can enjoy each other’s company and time, reassure our children, build faith, pray together and have some fun together,” Daly said.

With churches, schools and businesses in the Pikes Peak region closed and residents urged to work and stay at home until the highly contagious respiratory virus is contained, religious leaders are redefining worship and how people can live out their faith.

“Even when the world is thrown into chaos and our lives dislodged from the routines upon which we normally rely, God is still with us, never leaves, always loves us,” said the Rev. Jeremiah D. Williamson, rector of Grace and St. Stephen's Episcopal Church in Colorado Springs.

Pandemic reveals the essence of faith

Focus on the Family’s Daly likens the plague of Cyprian, which started in Ethiopia in the year 250 and spread to Rome, Greece and Syria, to the coronavirus. The Cyprian pandemic lasted 20 years and at its height reportedly killed 5,000 people a day in Rome.

“Christians were known for running into plague-infested areas, and some died, but many built up immunity and survived,” Daly said. “Christians should be willing to faithfully reach out — it’s what the Christian faith is all about.”

It’s also the point various churches are spreading among their flocks. Rost’s congregation of about 150 members includes Christians, Buddhists, atheists and pagans, yet the message is the same: “There’s more than one way to be a community of faith, and church is more than a building.”

She live-streamed services last Sunday and this Sunday is adding a chat feature to the video, so viewers can communicate with each other en masse. She’s also converted the church’s regular Tuesday fellowship gatherings to virtual chats. About 30 people tuned in last week.

“We may not be able to gather physically, but we can gather in spirit,” Rost said.

This week she plans to personally call each and every member, to check in and inquire about needs.

One of Rost’s guiding principles has been the poem, “The Desiderata,” by Max Erhmann, which says, “And whether or not it is clear to you, no doubt the universe is unfolding as it should. Therefore be at peace with God, whatever you conceive Him to be.

“And whatever your labors and aspirations, in the noisy confusion of life, keep peace in your soul. With all its sham, drudgery and broken dreams, it is still a beautiful world. Be cheerful. Strive to be happy.”

The Rev. Jordan Farrell, pastor of Beth-El Mennonite Church, said the connections between the love of God, love of neighbor and love of self have become apparent in the world’s current situation.

“The world God created and loves is interdependent,” he said.

Farrell is advising his 160 weekly churchgoers to share in “God’s shalom,” a Hebrew word indicating wholeness, completeness, salvation and well-being. It's often translated into English as “peace.”

“It’s an invitation to live in light of the fact that our well-being is intertwined with the well-being of each of our neighbors,” he said.

Farrell has instituted “Shalom Partners” — three households from his congregation which have been paired together and encouraged to somehow connect with one another at least once a week.

“Our hope is that this season of social distancing will be a time when we grow closer together,” he said.

Encouraging the bonds of community is "where joy happens and the spirit works," said Seger, a member of Colorado Springs Friends Meeting, a local Quaker group, and author of the book series, "Jesus Rode a Donkey: Why Millions of Christians are Democrats."

"Christianity is really about involvement and engagement and building spiritual connection," she said.

Williamson ended last Sunday’s online sermon to Grace and St. Stephen's Episcopal Church members saying that in these days of suffering, sickness and anxiety, he hopes Jesus will be found “in us.”

“As the world looks for some sign of hope, I want to believe they will find that hope in us, in our willingness to love boldly, in the ways we care for our most vulnerable, in the difficult decisions we make, in the ways we offer our hearts to the common good,” he said.

Such a crisis leads some to reconnect with their faith for strength.

“This pandemic has uncovered a basic problem — most people are not relying on the Lord or his promises as they should,” Wommack said. “Although it’s appropriate to call out to the Lord when we are in need, we shouldn’t wait until the storm is raging.

“This should serve as a wake-up call to us all to draw closer to the Lord and stay there.”

Wommack is advising people not to panic and operate out of fear.

“God’s word promises that faith overcomes anything circumstances can throw at us,” he said, quipping that he’s “tested positive for faith,” which he believes keeps people healthy.

“However,” Wommack said, “just because we operate in faith doesn’t mean we don’t use wisdom and follow the guidelines the health professionals are giving.”

Like the bubonic plague, the H1N1 flu, SARS and other pestilences, the novel coronavirus also will pass, religious leaders say.

“But our mission — carrying on the work of Jesus in this world — continues,” said Williamson, the Episcopal pastor.

Above all, pray, Focus on the Family’s Daly said.

“Prayer is huge, praying for our nation, for other people,” he said. “We believe prayer is powerful; the Lord’s mercy comes from prayer.”

The Bible speaks of the world not knowing when the end will come, and while it may seem like the sky is falling at this point in time, local faith leaders do not think Armageddon is at hand.

“Worst-case scenarios are 1 million to 1.5 million deaths of elderly and high-risk people, on the most aggressive side of modeling, but I wouldn’t say that’s apocalyptic,” Daly said. “We’ve had pandemics pretty regularly for years.”

Wommack thinks the situation will improve more rapidly than some are predicting.

“Since 95% or more of the people infected recover from this, and many who are infected are asymptomatic, I don’t think this is as devastating as other diseases throughout history, which the world has already survived,” he said.

“That’s not to diminish the devastating effects it is having for those who have died or have loved ones who have died. But we will get over this.”

In every generation, there's an event that gets described as apocalyptic, said Rost of All Souls Unitarian. While some view disease as God's wrath or punishment, Rost sees a pandemic as an awakening: “The sense that if we pay attention, we can change our ways.

“The anecdote of that fear is kindness.”

For Amanda Archuleta, the hand sanitizer shortage is more than an inconvenience. It's frightening.