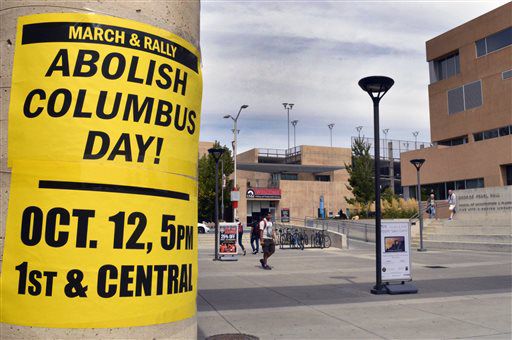 A flyer on the campus of the University of New Mexico in Albuquerque calls for students to join a protest against Columbus Day in 2015. A Colorado bill striking Columbus Day as a state legal holiday and replacing it with something else cleared the House State, Veterans and Military Affairs Committee on a 6-3 party-line vote Tuesday. 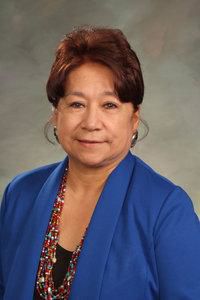 A flyer on the campus of the University of New Mexico in Albuquerque calls for students to join a protest against Columbus Day in 2015. A Colorado bill striking Columbus Day as a state legal holiday and replacing it with something else cleared the House State, Veterans and Military Affairs Committee on a 6-3 party-line vote Tuesday.

A bill striking Columbus Day as a state legal holiday and replacing it with something else cleared the House State, Veterans and Military Affairs Committee on a 6-3 party-line vote Tuesday.

But will it win enough support to move out of the House?

In 2018, it was making Election Day a state holiday and getting rid of Columbus Day. The 2020 version as introduced was a repeat of the bill from 2019. In 2019, Benavidez wanted Colorado Day, traditionally Aug. 1, as the state legal holiday, and it would be celebrated on the first Monday in August, according to the bill.

Colorado in 'high tier' of emergency preparedness, according to report

But Tuesday, she sought an amendment to instead have a day in honor of Frances X. Cabrini, also known as Mother Cabrini, an Italian native who came to Colorado in 1901 and operated the Queen of Heaven orphanage in Denver as well as a summer camp for girls on Lookout Mountain near Golden that is now the home of the Mother Cabrini Shrine.

The measure’s biggest problem for the past five years has been getting Democrats on board.

Before that, then-Rep. Joe Salazar, D-Thornton, had carried similar measures in the 2016 and 2017 sessions that both died in the Democrat-controlled House.

HB 1031 points out that Colorado wouldn’t be alone in repealing Columbus Day. So far, 11 states (Alaska, Hawaii, Iowa, Maine, Minnesota, New Mexico, North Carolina, Oregon, South Dakota, Vermont and Wisconsin) have renamed or removed it and 130 cities and towns have done the same, including Durango, Boulder and Denver.

Columbus was welcomed by the indigenous people he met when he crossed the ocean in 1492. But within 50 years those people were exterminated by Columbus and his successors, Benavidez told the committee.

As to Mother Cabrini, Benavidez said there is an intersection between the beliefs of native peoples and Cabrini, in part because of a spring Cabrini discovered near the summer camp.

“This isn’t the perfect answer, but it’s a compromise we can make and honor someone who is deserving,” and Colorado would be the first state in the nation to have a state legal holiday honoring a woman, she said.

“To hear about the pain and anguish this holiday causes people breaks my heart,” said Rep. Kyle Mullilca, D-Northglenn, who has signed on as a sponsor of HB 1031.

Mullilca said he respected Italian culture, “but we must take into account the pain and hurt it causes people when we celebrate Christopher Columbus. We can continue to honor Italian heritage without harming members of the community.”

Most of the dozens who testified favored the removal of a Columbus Day holiday and the renaming of it to Cabrini Day.

That included several people of Italian heritage, including Dennis Wilwerding, who testified on the bill last year. He’s Catholic and a member of Knights of Columbus, but backs the bill because he says a state holiday should honor someone people would want to emulate.

“By now we know the harm” that comes from honoring someone like Columbus, and he does not deserve to be honored, Wilwerding said.

Others testified to the harm to indigenous people throughout the history of the United States.

Walter Barrett testified on behalf of Claudia Kuhns, a long-time community activist. Columbus Day is a celebration of racism and genocide, Kuhns wrote. Indigenous peoples were considered less than human, and her testimony went into graphic detail about massacres, and forcing Native American children into schools into the 20th century to “kill the Indian to save the man.”

Rep. Susan Lontine, D-Denver, who voted against the Cabrini amendment, challenged the idea of naming a state holiday after someone “only a minority of Coloradans have heard of.” Cabrini isn’t even listed on the state’s history website as a notable person from Colorado, she said.

There are people just as deserving, but the primary concern is getting rid of Columbus Day, responded Jason Ball, a middle school teacher of Italian heritage.

But those who opposed the bill pointed out Columbus Day is still a federal holiday and will continue to be recognized, through postal holidays. Rich SaBell, who is also of Italian heritage, said the accusations against Columbus are unfair and untrue. Taking away Columbus Day takes away all recognition of the Italian community in Colorado, he said. “It honors generations of Italian-American families and their considerable contributions to this country ... and is as American as baseball and apple pie.”

”Nothing about this ridiculous bill is good for all of Colorado.”

Benavidez told the committee that the testimony reflects what a deeply personal and emotional issue Columbus Day is.

Neguse speaks up about Trump's silence on gun violence

U.S. Rep. Joe Neguse of Colorado was one of handful of lawmakers and gun violence prevention advocates who were unhappy with President Trump's State of the Union address Tuesday night.