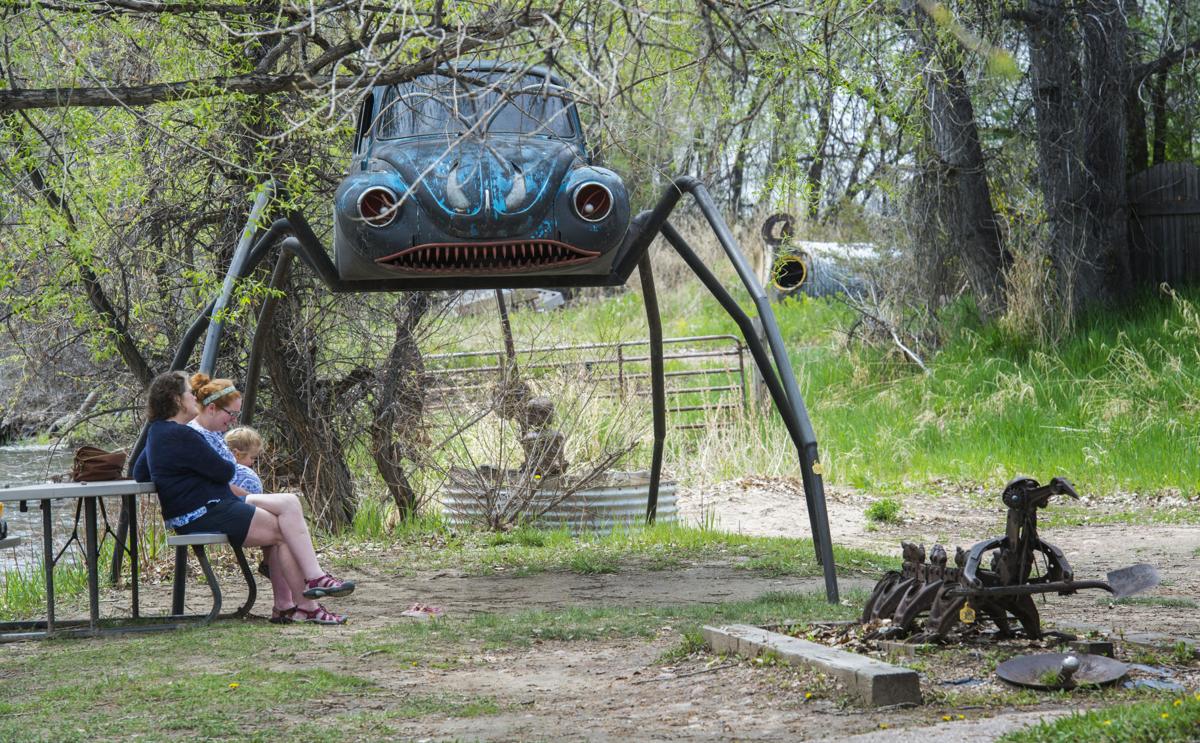 Visitors rest under the giant VW bug sculpture at the Swetszille Zoo near Fort Collins Sunday, May 6, 2018. Bill Swets, 77, has been creating creatures from scrapes of metal since 1985. (The Gazette, Christian Murdock) 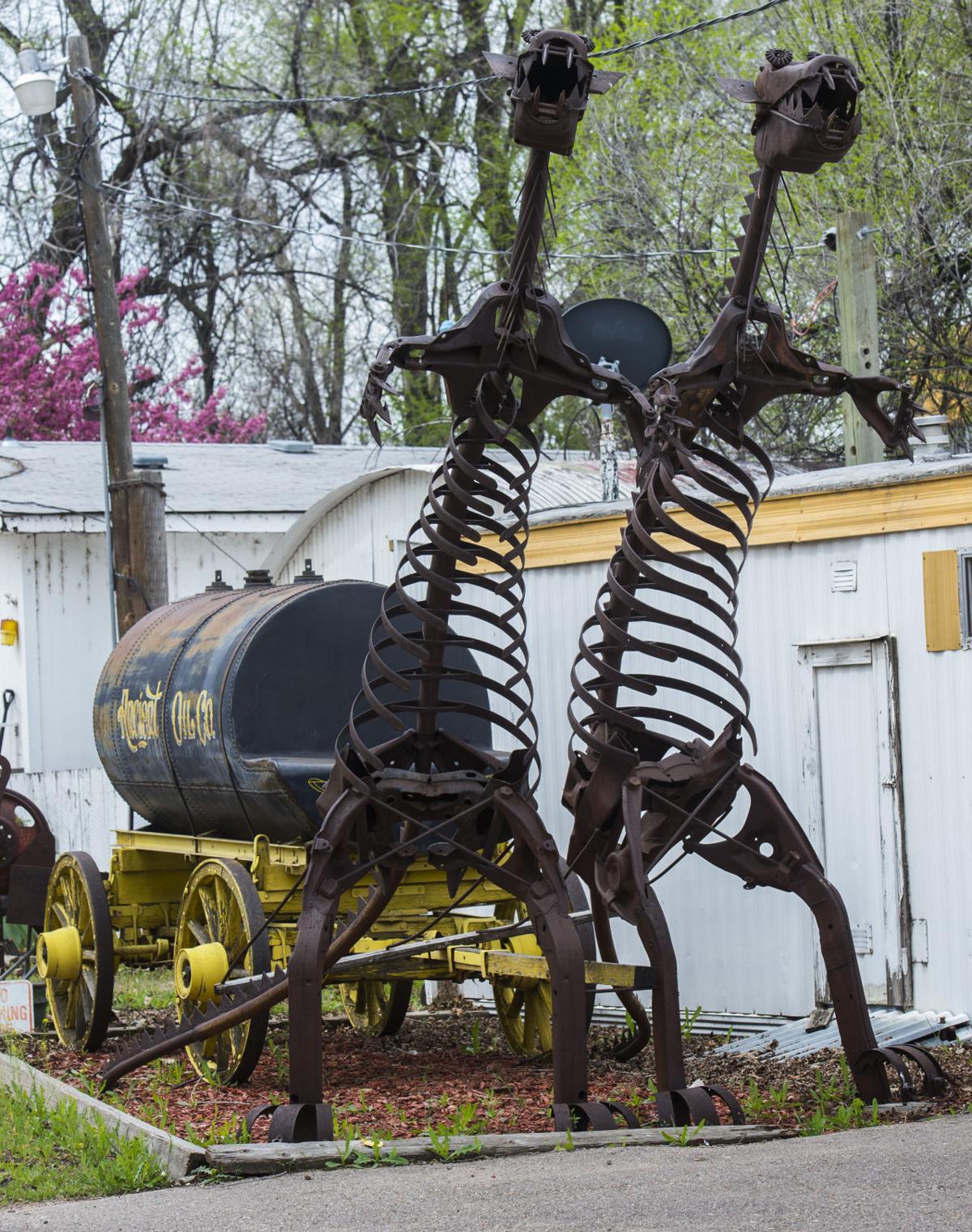 Dinosaurs made from scrape metal pull a wagon on the Swetsville Zoo in Timnath, Colo., Sunday, May 6, 2018. (The Gazette, Christian Murdock) 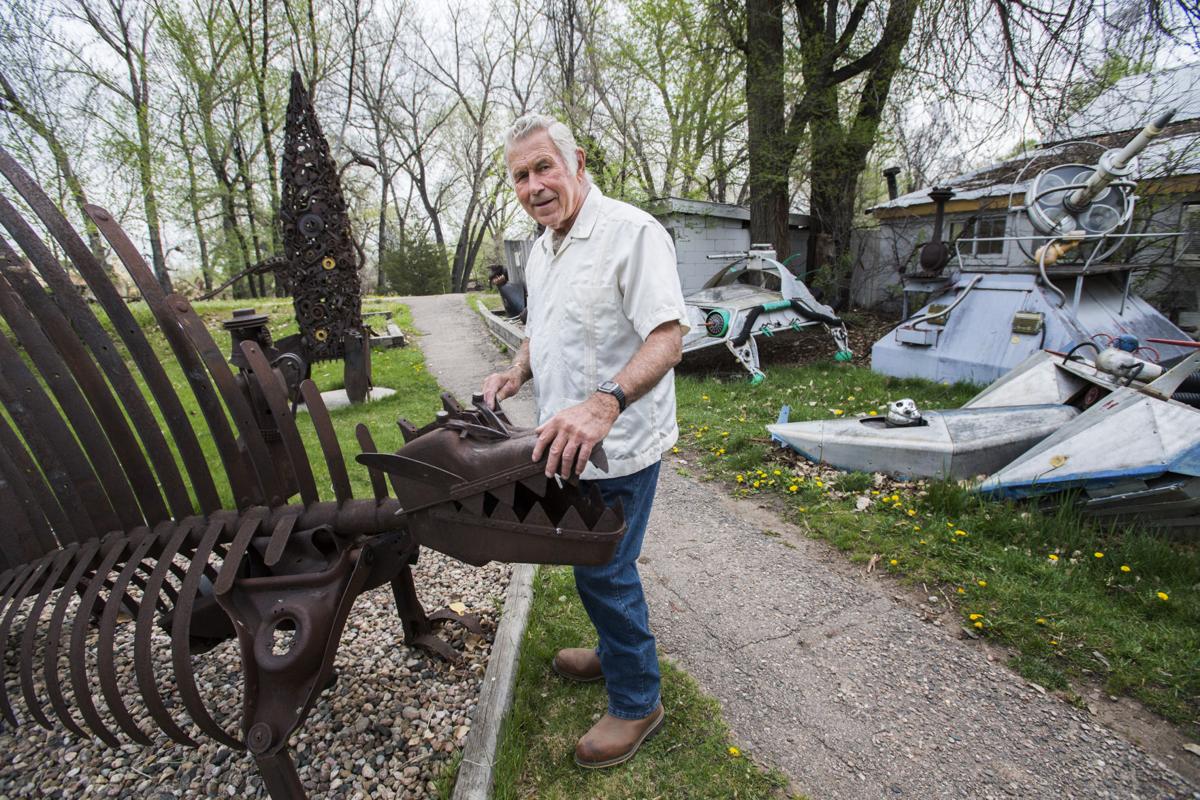 Bill Swets, 77, stands among some of the 200 sculptures Sunday, May 6, 2018, he has created and placed around his old farm in Timath, Colo., east of Fort Collins. (The Gazette, Christian Murdock)

Visitors rest under the giant VW bug sculpture at the Swetszille Zoo near Fort Collins Sunday, May 6, 2018. Bill Swets, 77, has been creating creatures from scrapes of metal since 1985. (The Gazette, Christian Murdock)

Dinosaurs made from scrape metal pull a wagon on the Swetsville Zoo in Timnath, Colo., Sunday, May 6, 2018. (The Gazette, Christian Murdock)

Bill Swets, 77, stands among some of the 200 sculptures Sunday, May 6, 2018, he has created and placed around his old farm in Timath, Colo., east of Fort Collins. (The Gazette, Christian Murdock)

TIMNATH - The house hides under the concrete bridge of Harmony Road, which carves between Costco and Walmart and fast-food joints and parking lots that have invaded the open fields in sweet memories that Bill Swets won't let fade.

And he won't let go of that house. The siding crumbles, revealing the original walls of the log cabin that was the 77-year-old Swets' childhood home. The crabapple tree stands by the cracked porch, still growing the ammo that his three boys used in crabapple wars waged when they weren't working around the farm that is no more.

Now Swets lives in the adjacent house, the one with the castle towers poking just above the road. A yellow gateway spelling "The Magic Kingdom" leads to the backyard, where flowers don't grow anymore.

His beloved creations remain, however. They are the metal creatures of the Swetsville Zoo, a free roadside attraction since 1985, when Swets for the heck of it crafted a 3-foot bird out of scrap. It's still there on the property under the once-wooden bridge, beside the river where Swets fished as a boy.

"I never dreamed it'd come out like this," he says of the zoo, which he estimates gets 15,000 visitors a year.

All around are some of the 200 sculptures Swets made from old farm equipment and car parts. A real-sized giraffe here, a similarly sized praying mantis there, and elsewhere a two-headed dragon, a pterodactyl, a triceratops, a brontosaurus and a 20-foot-tall T. Rex, its ribs formed by pipes that Swets heated a bit before shaping them with his paw-like hands.

Beyond his failing strength, the zoo faces a greater threat. One day maybe soon, he says, it could all be gone, swallowed by the development he hasn't been able to stop.

It started just west, just down the road at the Interstate 25 exit. Swets reluctantly made the deal with Costco four years ago. Now an appraisal could lead to the next deal, the last 36 acres of the 120 his dad bought after World War II, shortly after the boy's birth.

Swets has tightly held on to what's left. But last year, he wound up in a hospital and had to be shocked back to life, and now it occurs to him that he'll be gone before he knows it, that he needs to make a decision before the burden of the land falls to his sons. Swets doesn't want that. He wants to leave something for them and his grandchildren.

But here he is, walking through the zoo with his adoring partner, Diane Tribble, unable to explain his struggle.

"It's all he's known," says son Ken. "He doesn't know anything else, but then again, it's all so different than what it was before. I think he's starting to realize it's inevitable."

Some days, Tribble thinks he's ready to sell. Other days she thinks otherwise.

"He's worked hard all his life," she says. He deserves a break, and a retreat in Texas awaits them, if only he could pull himself away.

But Swets has projects, such as the 1927 Model T he wants to get running again.

Next to the crumbling house is the barn in which young Swets spent many mornings and afternoons milking cows. When the farm became his, he made it the workshop he always wanted.

A 10-seat bicycle collects dust inside. "I guess this was really the first wild thing I did," he says.

His wife, Sandy, wasn't too thrilled about the $150 he spent to make it - "we didn't have two nickels to rub together," Swets says - but it was something fun. Something for the kids. Something that took Swets' mind off other things, such as Sandy's ever-fluctuating health and the medical bills that came with it, and the stress from volunteering for little Timnath's fire department.

He and the crew could hardly keep up with the calls as interstate traffic worsened.

"We got so many medicals," he says, his voice becoming a hush. "Being here all my life, I was working on friends and neighbors, you know. Not good."

"He's had a lot of trouble, even to this day, sleeping at night. He's a bit of an insomniac," Ken says.

"He'll just be sitting there or laying down, and he goes out to the shop, and away he goes."

Swets never took an art class, not even at the 12-student country school he attended. But he learned to weld early, and during those nights he'd take a mental inventory of spare parts he had, and a new creature would enter his imagination.

The magic stopped at times. About 10 years after the zoo's first bird, Swets shifted his attention to an old 40-foot bus he acquired and souped up for travel. He wanted his wife to see the country.

Their first trip in 1996 was to the Mayo Clinic. Sandy was told her days were numbered. "It was like somebody took a baseball bat and whupped me real good," Swets says.

But once again, she made a turnaround. The "Bill and Sandy Dream Machine" took off.

Now the bus is dusty in a former corral, sharing space with antique chandeliers that won't glow.

After more than five decades together, Sandy died in his arms.

The flowers she planted withered. Oval plowshares are the iron petals of the ones that Swets made to last forever.

Last December, Swets was visiting Texas, where he'd taken Sandy for relief from the altitude. He came by a friend they had made.

"Diane, how you doing?" he asked, knowing she'd lost her husband almost a year ago to the day.

Tribble broke down in tears. So did Swets. They held each other for a while and have been together ever since. "We put it back together," he says.

The times haven't been without more heartbreak. A few years after he buried his wife, Swets got a call more nightmarish than any of those in his first responder days. His boy died in a car crash.

The magic stopped again. And again, Swets eventually got back to his projects.

"I think that was kind of his outlet to keep going," Ken says.

Swets most recently came by a tank and used it to build a minion, the popular cartoon character. It's one of only a few additions to the zoo since Sandy died.

And everything above the bridge is everything he doesn't want to see, a harsh, daily reminder that nothing can stay the same.

"How would you really feel about leaving here?" Tribble asks as they walk among the creatures frozen in time.

Swets is silent again, deep in thought. The moment passes with the sound of traffic vying with the water and the laughter of kids playing nearby.

Of everything he can imagine, he can't imagine this being gone, this place where there is laughter, where the river still runs, and everything else stands still.

No matter how you get there, the views going into Lake City are spectacular.