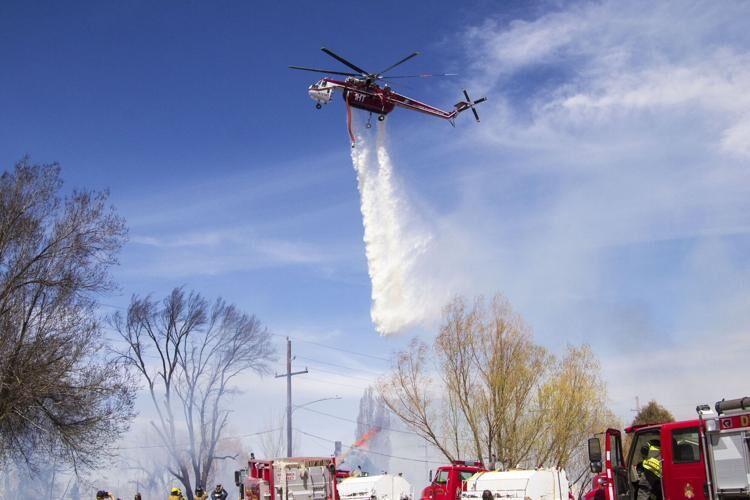 A helicopter drops water on a burning house in Monte Vista on Wednesday. 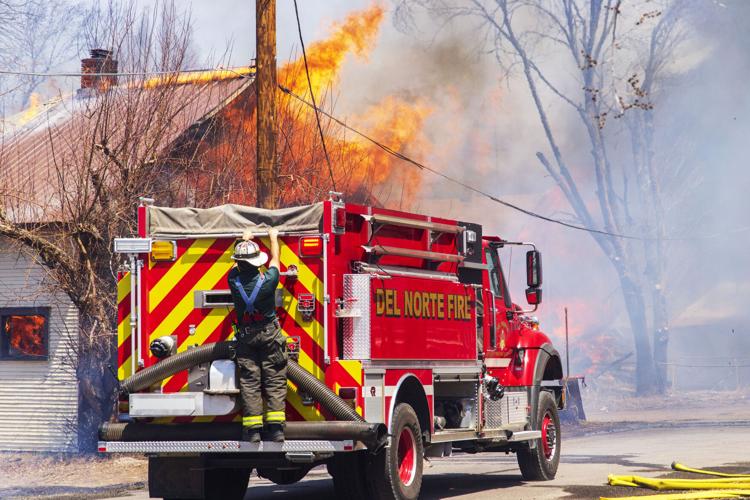 Del Norte fire department responds to a wildfire in Monte Vista on Wednesday.

The Monte Vista Police Department estimates 15 structures were lost or damaged during the wildfire that hit the southern Colorado city Wednesday.

Police said estimates include homes and outbuildings. An official number along with an estimated damage amount will be released at a later date, according to a news release from the department.

All evacuation orders for the area in Rio Grande County were lifted at 3 p.m. after fire personnel and investigators deemed it was safe for residents to return home, according to the department.

Police said the investigation into the cause and origin of the fire is ongoing, although investigators continue to work an area north of Acequia Drive and west of Jefferson Street. Following the investigation, the results will be given to the 12th Judicial District Attorney's Office.

Three researchers with the University of Colorado Boulder's Aerospace Engineer Department were at the Table Mountain Radio Quiet Zone using a drone to conduct severe weather studies when it crashed.

Officials said the crash caused a lithium-ion battery cell to come loose and ignite the blaze. The researchers called 911 and cooperated with investigators, according to the Sheriff's Office.

No criminal charges will be filed "due to the accidental nature of the incident," the Sheriff's Office said.

The Sheriff's Office also enacted Level 1 fire restrictions for all areas of unincorporated Boulder County effective immediately Thursday. Personal fireworks, smoking outdoors in area not cleared of all combustible material, use of any internal or external combustion engine without a spark arrestor, and any fire not within a permanently constructed fire pit, ring or grate on public or private land are all prohibited.

Six families were displaced by the Monte Vista fire, according to a Facebook post by the city of Monte Visa.

The post stated most residents who were evacuated because of the blaze were allowed to return to their homes around 9 p.m. Wednesday. While many residents have returned, law enforcement has secured the area and will continue patrolling the evacuation zone, according to the post.

Officials have not said how many buildings were damaged, but they indicated that they would release that information following a damage assessment.

As of 1 p.m., no injuries and no missing persons had been reported in connection with the fire.

The Monte Vista Police Department, Colorado Bureau of Investigation and fire investigators from the Colorado Division of Fire Prevention and Control are still investigating the cause and origin of the fire. However, officials said "there is no indication or reason to believe this was intentional."

• Investigators have determined that the NCAR fire was human caused, and the Boulder County Sheriff's Office is asking the public for help in identifying a suspect.

The fire caused thousands of people to evacuate their homes and burned 190 acres before being fully contained March 31.

The National Weather Service has issued a Red Flag Warning for over half of the state Friday citing conditions which are even more severe than they were for the Marshall Fire.

“There’s a much larger area under the gun than there was for the Marshall Fire,” said Greg Hanson, Warning Coordination Meteorologist for the Boulder National Weather Service. “The Marshall Fire was isolated to that one part of Boulder County. The winds Friday won’t be as strong, but we are experiencing much drier conditions.” Hanson said unusually high temperatures for April will add to the dire conditions.

Thursday's weather will offer no respite from the extreme fire danger with which Colorado has been contending, according to Gazette news partner KKTV.

Can't stress this enough... Fire danger will be extreme Friday. Get ready for wind gusts over 55 mph throughout the day. #COwx pic.twitter.com/4dcGp0wU06

• Another blaze near Woodland Park — called the Rampart fire — has burned 3 acres, according to Pike and San Isabel National Forests Cimarron and Comanche National Grasslands.

In a report Wednesday night, the agency said crews were scheduled to work through the night. It added: "There are heavy fuels burning that the crews will be working on and the glow will be seen from a far distance."

The fire was reported about 4 miles east-southeast of Woodland Park off Rampart Road.

As fires roar through the state's tinder-dry spring grasslands, Colorado Springs fire officials expect conditions will only worsen in the comi…