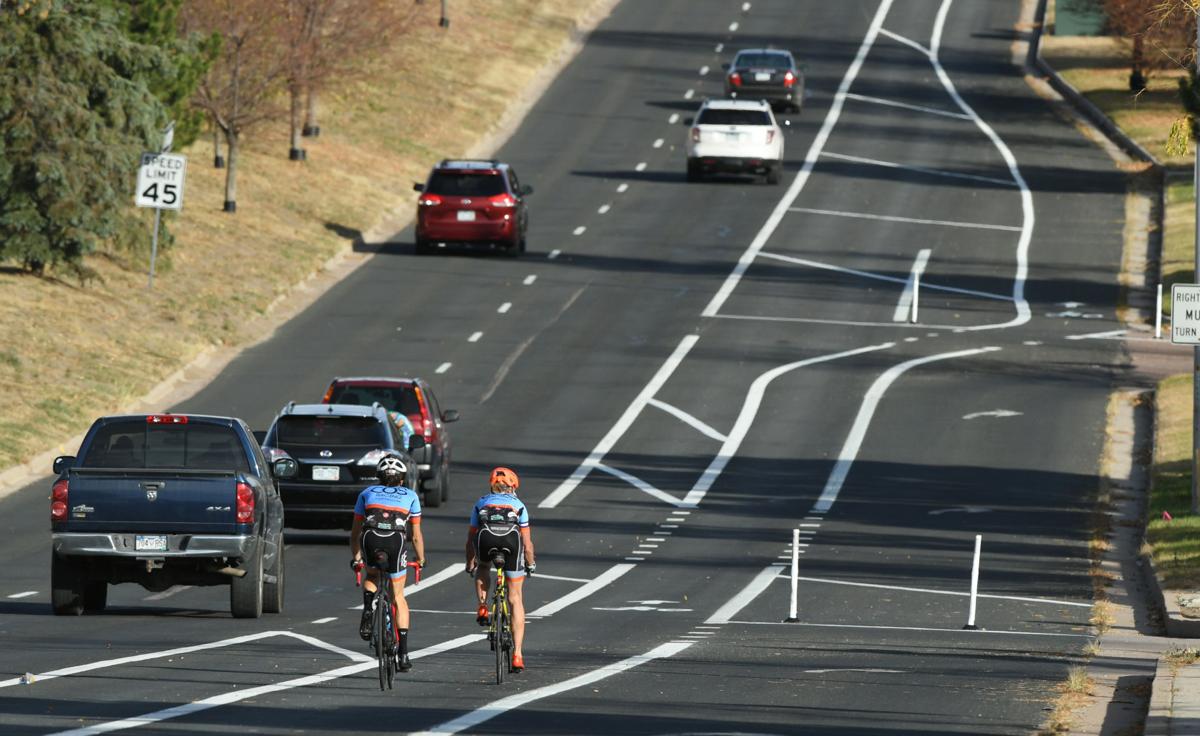 Zach Russell, left, and Janet Winterhalder with COS Racing ride eastbound on Research Parkway at Windy Hill Drive Tuesday, November 1, 2016, in the buffered bike lane that has been in service since the end of September. Photo by Mark Reis, The Gazette 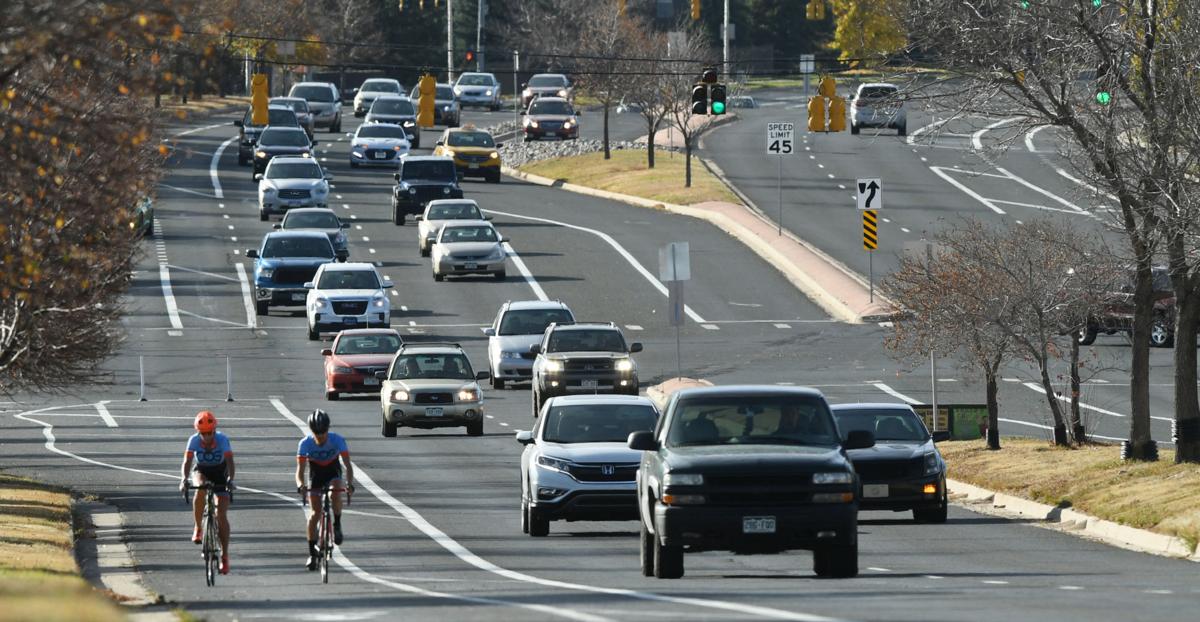 Janet Winterhalder, left, and Zach Russell with COS Racing ride eastbound on Research Parkway Tuesday, November 1, 2016, in the buffered bike lane that has been in service since the end of September. Photo by Mark Reis, The Gazette

Zach Russell, left, and Janet Winterhalder with COS Racing ride eastbound on Research Parkway at Windy Hill Drive Tuesday, November 1, 2016, in the buffered bike lane that has been in service since the end of September. Photo by Mark Reis, The Gazette

Janet Winterhalder, left, and Zach Russell with COS Racing ride eastbound on Research Parkway Tuesday, November 1, 2016, in the buffered bike lane that has been in service since the end of September. Photo by Mark Reis, The Gazette

The city of Colorado Springs will scrap a wide bike lane along Research Parkway.

Crews had placed posts and painted stripes on the six-lane corridor in September, converting the two outer lanes into space for cyclists. Cities are popularly using protected buffered lanes to increase bike friendliness, and local officials said the intent of the demonstration project was to potentially "right-size" Research Parkway, which they said a study found to be built too large.

Now crews will revert the road in the coming days, removing the lane that stretched 3 miles between Austin Bluffs Parkway and Chapel Hills Drive. The city released findings Thursday showing the lane did nothing to reduce traffic speeds or accidents. Also according to officials, the lane did not increase biking in the corridor as expected. Cyclists in the area will return to the sidewalk along the road.

Residents near Research Parkway have strongly opposed the demonstration project from its beginning, and officials say their voices were the overriding decision to pull the plug on the demonstration. Previously, the plan was to wait on making a decision until the summer, when the road is due for an overlay.

"The bottom line is, you can't ignore the level of opposition," Mayor John Suthers said in a phone call, citing an online survey by the city that 1,347 people completed, with 80.5 percent calling for the project's reversal. Of the respondents, 63 percent lived in neighborhoods by Research Parkway.

Suthers added: "We do think that bike transportation for getting to work as well as for recreation is a big part of the city's future. But we'll always take into account what the feelings are of the people impacted by it, and in this case, they were overwhelmingly negative."

Suthers has echoed Gov. John Hickenlooper's belief that cities can improve quality of life and attract businesses and young professionals by adding bike infrastructure. The mayor said he did not fault the city's traffic engineering division for identifying Research Parkway, a corridor worthy of bike lanes according to a 2014 survey by the Pikes Peak Council Area of Governments. Tim Roberts, a senior planner with the division involved in organizing the project, said he was surprised by the traffic data he collected. As for the opposition, "we knew it would be controversial," he said.

Roberts pointed to projects in the past that reduced vehicular lanes for bikes and were not met by such opposition - projects on Templeton Gap and Cheyenne Boulevard, for example.

"The suburban design, and the desire to get places fast is maybe more of a neighborhood desire than multi-modal infracture," he said of Research Parkway's area.

Allen Beauchamp, the longtime advocate with Bike Colorado Springs, observed the protected buffered lane as the city's best-ever infrastructure by design. However, its placement on a major artery in the city's northeast side was bold, he said.

"We have to pick projects that are gonna benefit the greatest number of people, and this was an area that doesn't necessarily have a bunch of bike commuters," he said.

"My biggest fear is that they see bike and pedestrian infrastructure as a special interest," he said. "Culturally, we're at a bit of a crossroads."

Colorado Springs has 110 miles of on-street bike lanes, compared to 190 in smaller Fort Collins and 80 in Boulder. Those two towns hold the League of American Bicyclists' highest platinum rating for bike friendliness. A goal within the Springs' strategic plan is to improve its silver status to gold, and the steps for achieving that will be outlined in the coming year as the city expects to release its first bike master plan in a decade.

Going forward, Suthers said he believed some areas of the city are "more amenable than others" for infrastructure.

"It certainly doesn't have what downtown has," he said of the northeast side. "Hopefully, there will be more discussion."

Hate it or love it: Gazette readers have mixed feelings for new bike lanes