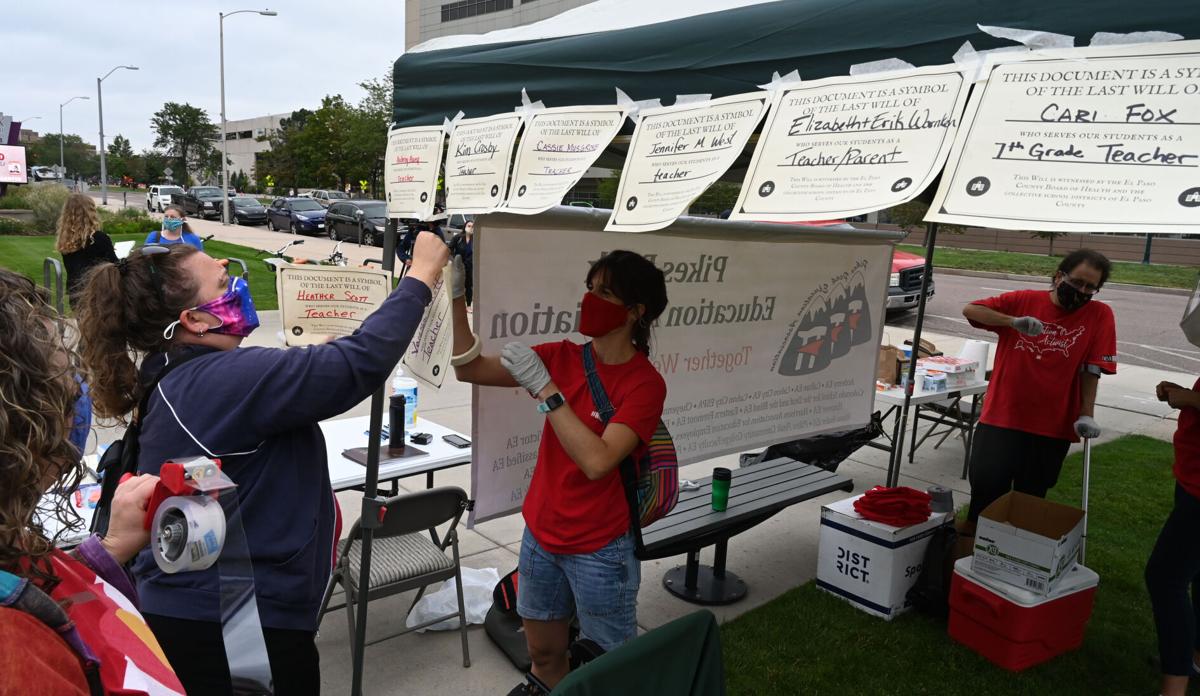 Teachers that are concerned about going back to school during the pandemic had their wills notarized on Monday, August 3, 2020, outside of where the County Commissioners meet. Vanessa Scott hangs up some of the symbolic wills that were signed by supportive teachers. (Photo by Jerilee Bennett, The Gazette)e 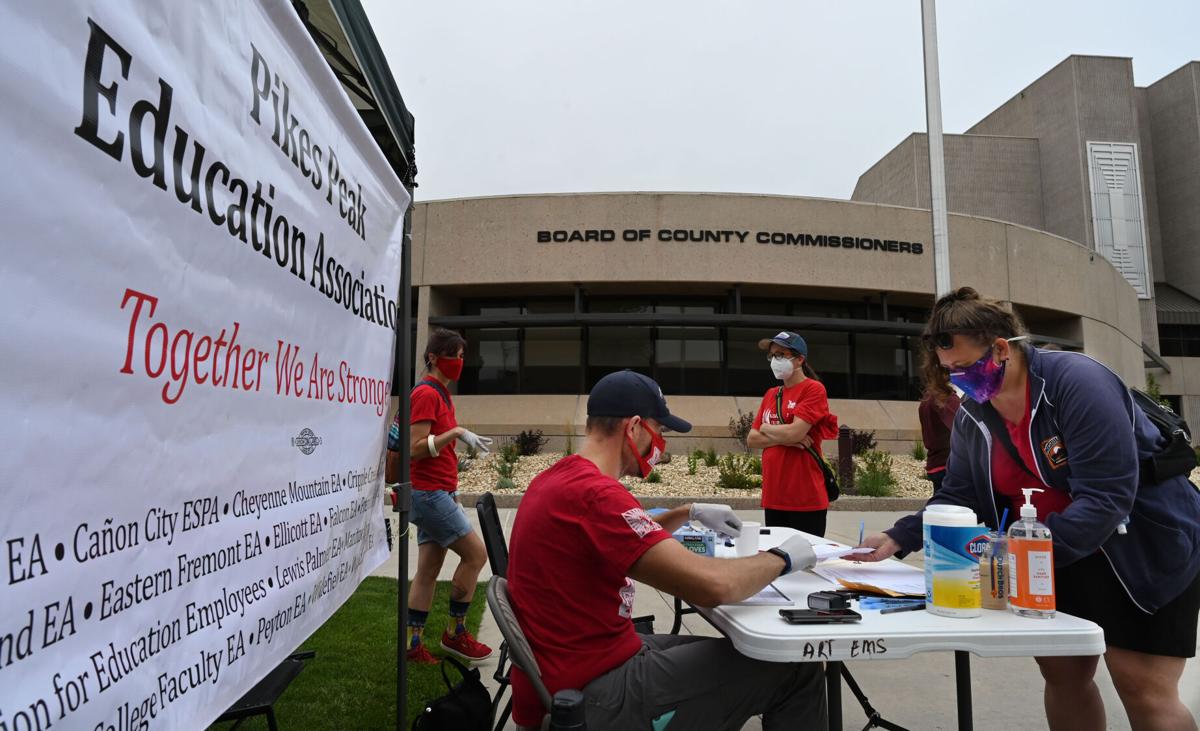 Teachers that are concerned about going back to school during the pandemic had their wills notarized on Monday, August 3, 2020, outside of where the County Commissioners meet. Vanessa Scott has her will notarized by Nate Golich. (Photo by Jerilee Bennett, The Gazette)e

Teachers that are concerned about going back to school during the pandemic had their wills notarized on Monday, August 3, 2020, outside of where the County Commissioners meet. Vanessa Scott hangs up some of the symbolic wills that were signed by supportive teachers. (Photo by Jerilee Bennett, The Gazette)e

Teachers that are concerned about going back to school during the pandemic had their wills notarized on Monday, August 3, 2020, outside of where the County Commissioners meet. Vanessa Scott has her will notarized by Nate Golich. (Photo by Jerilee Bennett, The Gazette)e

A handful of educators signed their wills outside of Centennial Hall Monday in a recognition of their opposition to the resumption of in-person learning this fall.

The teachers, members of the Pikes Peak Education Association, stopped by the organization's tent to have their wills notarized and signed in front of witnesses, or to symbolically sign a will as a gesture of solidarity for those returning to the classroom.

"The way it is set up right now, I would never go," said Cari Fox, a seventh grade teacher at Challenger Middle School in Academy District 20 and president of the association. "They're wanting me to teach 100 students a day, and that's a lot of contact for someone that's been in her house all summer. It's a scary proposition."

Parents rallied in Castle Rock on Friday, calling for Douglas County schools to fully reopen this school year, a week after the county school district announced it would operate on a "hybrid" model alternating between online and in-person learning to start the 2020-21 school year.

Teachers gathered at the same venue two weeks ago to call on the county health department to set standards schools must meet to open for in-person learning, such as requiring masks be worn by everyone in attendance and mandating social distance of 6 feet be maintained among individuals.

Under Gov. Jared Polis' mask mandate, those age 11 and older must wear a mask when in public, including at schools. All other guidance issued by the state is just that: guidelines, not requirements.

Decision-making authority as to the re-opening of schools rests with local school boards and superintendents, unless local public health agencies require that schools submit re-opening plans for approval. El Paso County Public Health has not issued such a requirement, and will not, although it has released optional guidance, including recommendations of social-distancing, face coverings and cohorting, which is when a group of students stay together throughout the school day to minimize exposure for students, teachers, and staff, Dr. Leon Kelly, the county's deputy medical director, told The Gazette this month.

"The hard truth is I can write all the guidance I want, and schools can follow, but if the community fails to control the transmission outside schools, that's going to be the biggest driver as to whether schools succeed or not," Kelly said. "We cannot ask these schools to do something the community is incapable of doing."

Earlier this month the department recommended schools delay the first day of classes until at least Aug. 17 because of the increase in coronavirus cases in the Pikes Peak region. The delay would allow decision-makers more time to analyze virus levels, official said. Many districts had already planned to resume school after that date, and most of the exceptions updated their in-person learning start dates accordingly.

While all area school districts will offer online learning options, schedules and rules for in-person learning vary widely by district -- ranging from a hybrid of both to full-time remote learning.

Fox said teachers must prepare themselves for the dangers of returning this fall, and that signing a will is one of those preparations.

As the start date for some schools looms two weeks away, some teachers such as Angela Bird are preparing for the worst.

"My preparation used to be, what do I want my bulletin boards to look like, how do I want to arrange groups so my kids talk to each other, and now that's changed," said Bird, a teacher at Mesa Ridge High School in Widefield District 3.

Regarding signing her will, "it's one of those things I used to think 'What if?' But it seems to be staring me a little more eminently in the face," she said.

Bird said she and her colleagues love to teach and that in-person classes are much easier than digital classes, but the safety of her students and family are a higher priority.

"I've been to students' funerals," Bird said. "I don't want to go to anymore student funerals because of something like this."

Preschool and elementary school students in Cheyenne Mountain District 12 will return to in-person learning in late August, but older students…