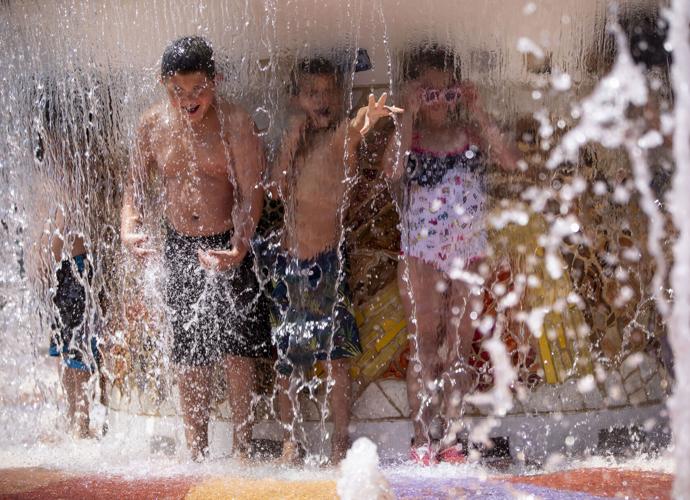 Connor Garcia, 9, Antoine McKenzie, 6, and LeRay Maestas, 6, from left, play in the Uncle Wilber Fountain at the west edge of Acacia Park in downtown Colorado Springs on Friday, July 31, 2020.  (Chancey Bush/ The Gazette)

Colorado Springs experienced a summer of record-setting heat, a trend climate and weather experts expect to worsen in the coming years.

Between June, July and August the city experienced seven days of record setting heat and entered September with a slight lag in rainfall.

"The number of 90 degree days is probably more typical with what we have seen in recent years but the temperatures have still been above average and this is something we could probably expect in future summers," Becky Bolinger, assistant state climatologist for the Colorado Climate Center, said.

The first record breaking heat day of the summer, June 16, not only set a daily records, but marked the 10th time in recorded history that the city hit 100 degrees or greater, the weather service said.

Several more record breaking heat days followed during June and July. The heat was also met by slightly more rain than usual in July with 3.36 inches compared to the average 3.12 inches. But during August, the region started to fall behind on rain by more than 2 inches, the weather service said.

"We're not in drought conditions, but there is a concern of the increased probability of seeing a La Niña winter, which means drier than normal conditions across southeastern Colorado," Mark Wankowski, a meteorologist with the National Weather Service in Pueblo, said.

Lack of rain wasn't the only notable weather feature of the month. This year, August totaled as the second hottest August on record behind last year, coming in as runner-up by less than a degree. Temperatures reached 90 degrees or greater at least 20 times during the month, Wankowski said.

Despite the high temperatures, a wet July and May, as well as higher relative humidity throughout the summer, helped Colorado avoid a repeat of 2020's fire season, which included the state's three largest fires in history, burning hundreds of thousands of acres of land.

"It was nice that we didn’t have to worry about as many wildfires but it’s a bit of a give and take," Michael Garberoglio, a forecaster with the National Weather Service in Pueblo, said.

While Colorado experienced a less active fire season, smoke from wildfires in surrounding Western state's still proved to be a problem with many air quality warnings issued across the state during July and August.

Wind patterns were to blame for the smoke settling above Colorado, Wankowski said.

"Definitely been above average, we usually don’t see as much smoke from wildfires," Wankowski said.

And the hot weather isn't expected to stop in September. Bolinger, the state's assistant climatologist, said September is becoming an extension of summer.

"September is one of those months that has really shown the most significant change," Bolinger said. "We can definitely expect to see warm temperatures."