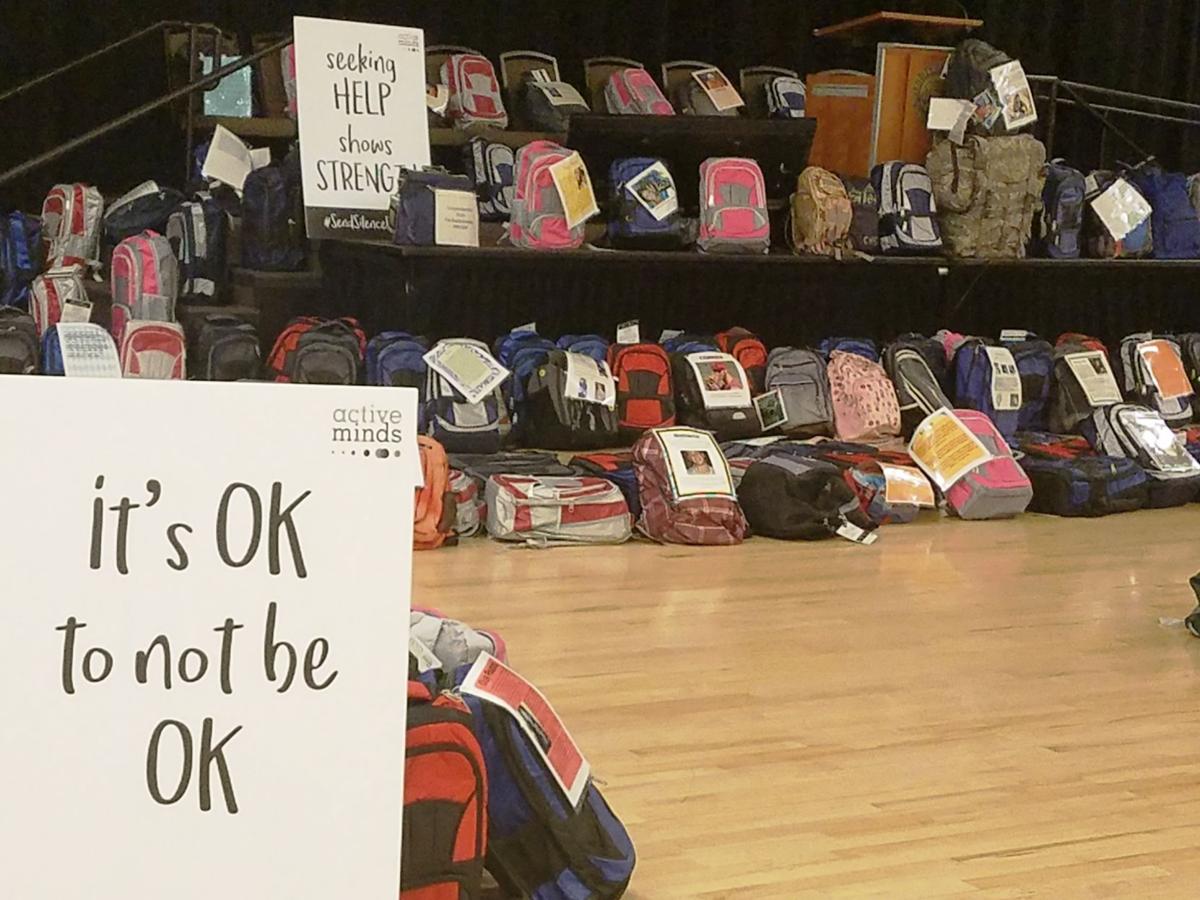 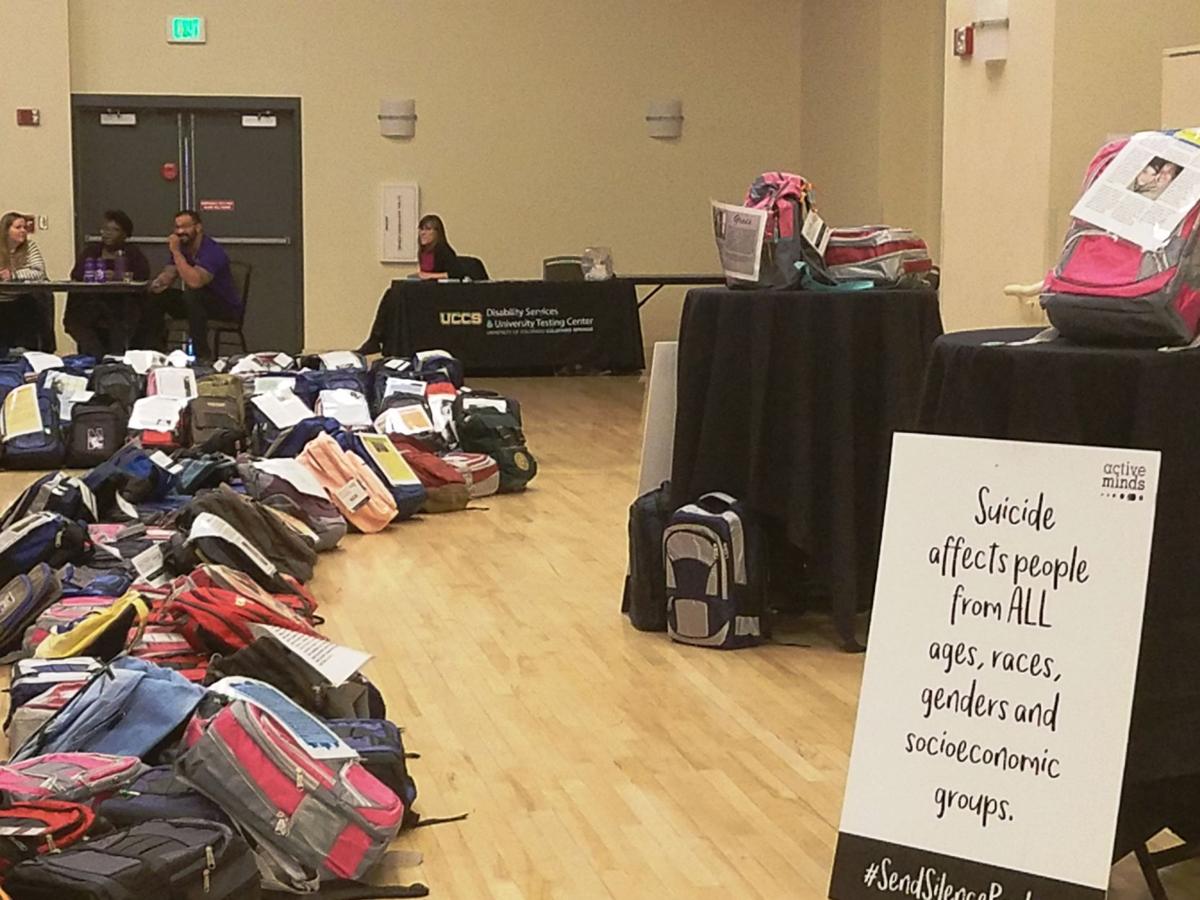 “I had talked to her a few days before it happened, and she seemed fine,” Portaleos said. “I didn’t see any warning signs. A lot of her friends didn’t, either.”

Two El Paso County teens have died by suicide since mid-March, when society began to shut down.

“A lot of youth are dealing with anxiety and being socially isolated at home,” 18-year-old Portaleos said.

“Along with what’s triggering the anxiety and bad mental health is the fact of not knowing what’s going to happen in the next few weeks or so,” he said. “And a lot of seniors are losing their traditional end-of-year experiences.”

The coronavirus is taking a toll on the mental health of every generation.

The medical community is “starting to see the mental health complications” from social distancing and families being confined to their homes, said Dr. Erik Wallace, associate dean for the Colorado Springs branch of the University of Colorado School of Medicine.

Health providers are concerned that increased social isolation, economic instability and gun sales could create a trifecta that leads to history repeating itself.

“Those are increased factors that go into suicide,” Wallace said. “The feeling is this may be the calm before the storm, as people are struggling through this time.”

The rate of suicide in the United States grew four times faster between 2008 and 2010 than it had in the eight years before the Great Recession, according to the medical journal The Lancet.

More than a decade later, mental health leaders are developing proactive measures to prevent a potential spike in El Paso County, where the community has worked hard over the past few years to substantially decrease what were among the highest teen suicide rates in the nation.

“We’re seeing a lot of stressors colliding for youth and families,” said Jamie Falasca, director of Child and Family Services for AspenPointe, a nonprofit mental health provider in Colorado Springs.

She ticks off anxiety over the unknown, financial stress, worry about catching the virus, pressures related to children doing school at home, the inability to engage with peers and conflict that arises from occupying a shared space.

“They are things that make people more vulnerable for anxiety and depression, and we want to get ahead of that before they degrade to hopelessness, suicidal ideation and suicide,” Falasca said.

The need is growing

The phones at Pikes Peak Suicide Prevention began lighting up in mid-March, as stores and workplaces closed and layoffs and reduced hours for workers affected paychecks.

The themes are similar: “I’m friggin’ going crazy.” “I don’t feel I have anyone to turn to.” “I’m scared about my finances.”

Callers embody the gamut of the community, Walton said, from essential employees like grocery store clerks, truck drivers, medical workers and first responders, to those who have lost their jobs and senior citizens. All are anxious and fearful. Many are lonely and say they have nowhere to go to relieve stress.

“It’s become clear that a lot of folks aren’t in imminent risk of suicide and are not in active crisis,” Walton said, “but they have no social outlet,” such as heading to the gym or meeting a friend.

In the past few weeks, calls from teens in distress have increased by 75%, Walton said, as schools remain closed and traditional graduations, proms, senior awards and other scheduled events have been canceled.

Though teens continue to connect with peers on social media, they miss interacting with friends at school and during free time.

“They are grieving those losses,” Walton said.

Several recent deaths by suicide can be attributed to coronavirus stressors, according to Dr. Emily Russell, forensic pathologist and deputy chief medical examiner for the El Paso County Coroner’s Office.

The county recorded a total of 51 suicides from Jan. 1 through April 22, down from the 2019 number of 56 suicides in the same period, she said.

There have been 21 deaths, including two youths, by suicide between March 16 and April 22 during the coronavirus restraints. Three have been identified as being related to coronavirus crises, Russell said.

Last year, there were 20 suicides during the same time, including one youth.

Telehealth — sessions with doctors, therapists and counselors via video on an electronic device or on the phone — has become a new normal modus operandi.

In the span of four weeks, the world of telehealth moved forward 10 years, said Wallace, who’s also an associate professor of medicine at the Colorado Springs campus of the CU School of Medicine.

The pandemic also has opened lines of communication so that health systems are more willing to share information, he said.

“We wonder if that’s going to be able to continue as we create a better society and health system,” Wallace said. “A lot of good is coming out of society in these changing times.”

In the last half of March, AspenPointe provided some 7,600 telehealth and telephonic services to individuals, families and in group therapy.

The need is growing, Falasca said, as people assess the impacts of the coronavirus on their lives.

AspenPointe had been offering telehealth for psychological care and, in just 48 hours in mid-March, added clinical services, Falasca said. The organization continues to have 24/7 walk-in crisis clinics and necessary in-person treatment, but primarily has shifted to virtual appointments.

The virtual format “helps encourage engagement and connectedness,” Falasca said, even without the ability to meet with clients face to face.

Staff members have set up technology for clients when needed, she said, and insurance companies, including Medicaid, cover the services.

“It might feel like there’s a limit to what people can access now, but our mental health services and resources are all available,” Falasca said. “We might look a little different, but people don’t have to wait for help.”

AspenPointe also is providing outreach, case management and therapy to the homeless population, as well as children who see counselors during school but now are learning at home.

“The need is significant and growing,” she said.

Along with anxiety and depression, people are experiencing trauma and post-traumatic stress from the pandemic, Foster said.

While it’s natural to feel out of sorts during this unusual time, there comes a point where people recognize that they themselves, family members or friends may need expert advice on how to cope, she said.

“You may feel very defeated, scared about what’s going to happen, pressured to find a job, unsure how you’ll get through it, wonder whether you’ll feel comfortable traveling again, how can you get back to the norm — all these emotions.”

Therapists are seeing people who were struggling with mental health issues before the coronavirus as well as new clients.

“Helping people build resiliency, develop strengths and think through a plan has a lot to do with it,” Foster said.

“I hope a silver lining is people have an increased awareness of the need for mental wellness,” she said. “I’m definitely seeing a shift in preventive and proactive communication before a crisis.”

One reason could be with parents being at home more with their children, they can observe behavior more closely, pick up on problems and talk about what’s going on, Walton said.

CU School of Medicine students are calling clients from the geriatric clinic to find out how they’re doing, if their medications are filled and if they need any support, Wallace said.

“Doing this gives us more opportunity to be proactive and catch them before they're in crisis,” he said.

“It’s been a really popular service,” she said. “A lot of people need some proactive connection.”

Direct mailers to past program participants with messages of “We’re thinking of you — there are resources available” also have been distributed.

Several new ad campaigns to educate the public about suicide prevention, community resources and how to stay mentally healthy are in the works.

Given that firearms are the most widely used method in suicide attempts and the most deadly, Wallace in December 2018 formed a local nonpolitical initiative to promote safe storage of guns. The group has amassed supporters from the medical community, public health, law enforcement and gun shops.

The El Paso County Firearm Safety Workgroup worked with a state coalition to develop the nation’s first online map of nearly 70 gun shops and other locations statewide that will safely store personal guns for people who might have a suicidal episode at home or otherwise need to temporarily and voluntarily place their guns elsewhere.

The group now is moving ahead with slogans to promote public awareness that safely storing guns at home or off-site can save lives without removing Second Amendment rights.

The primary concern, Wallace said, is that the surge in firearms purchases that happened shortly after the coronavirus outbreak began, is estimated to be 30% to 40% first-time buyers, who may not be receiving proper training and education.

“In our data, most people complete suicide with a gun they’ve owned for a long time,” he said. “They’re not buying them to end their lives, but as time goes on and social isolation and economic instability continue and mental health not well cared for, they now have access to something that could potentially take their lives.”

Language will be developed based on feedback from community focus groups, and local organizations will help deliver the messages, with the intent of reducing suicide rates.

Pikes Peak Suicide Prevention and Community Health Partnership, a local nonprofit that collaborates with other organizations to improve health in the Pikes Peak region, have asked teens from area high schools, including Portaleos from Doherty High, to create positive social media messages for their peers.

A recent survey the organizations conducted showed youths are feeling isolated, extremely bored, like they’re living the same day over and over, and worried about running out of food or other basic needs, Walton said. Teens also are having difficulty figuring out how to transition to distance learning.

The ads teens are developing will address coping strategies and ideas for how to spend time constructively. They’ll share positive stories and suggestions, such as check out this Netflix series or try this TikTok dance.

Portaleos said he wanted to get involved with the project because teens need to hear “from a youth’s perspective” about activities they can do or how they can deal with their anxiety or grief.

Schools and organizations will circulate the messages on social media for 90 days.

“This is important because a lot of teens right now are dealing with mental health and need support,” Portaleos said.

“They need to reach out and talk to another teen or know they can go outside and ride bikes or go for a hike or create projects at home so they won’t be bored and thinking about suicide.”

Are we reopening too soon in El Paso County? | Vince Bzdek

Coping with coronavirus around Colorado | A 'mask-making adventure'

They started out making covers for N95 masks, for nurses, then expanded to cloth masks, for nursing homes and rehab facilities, family, friends, neighbors and pretty much anyone who asked.