A rendering of the city of Colorado Springs’ proposed purchase of Fisher Canyon in the southwest foothills. 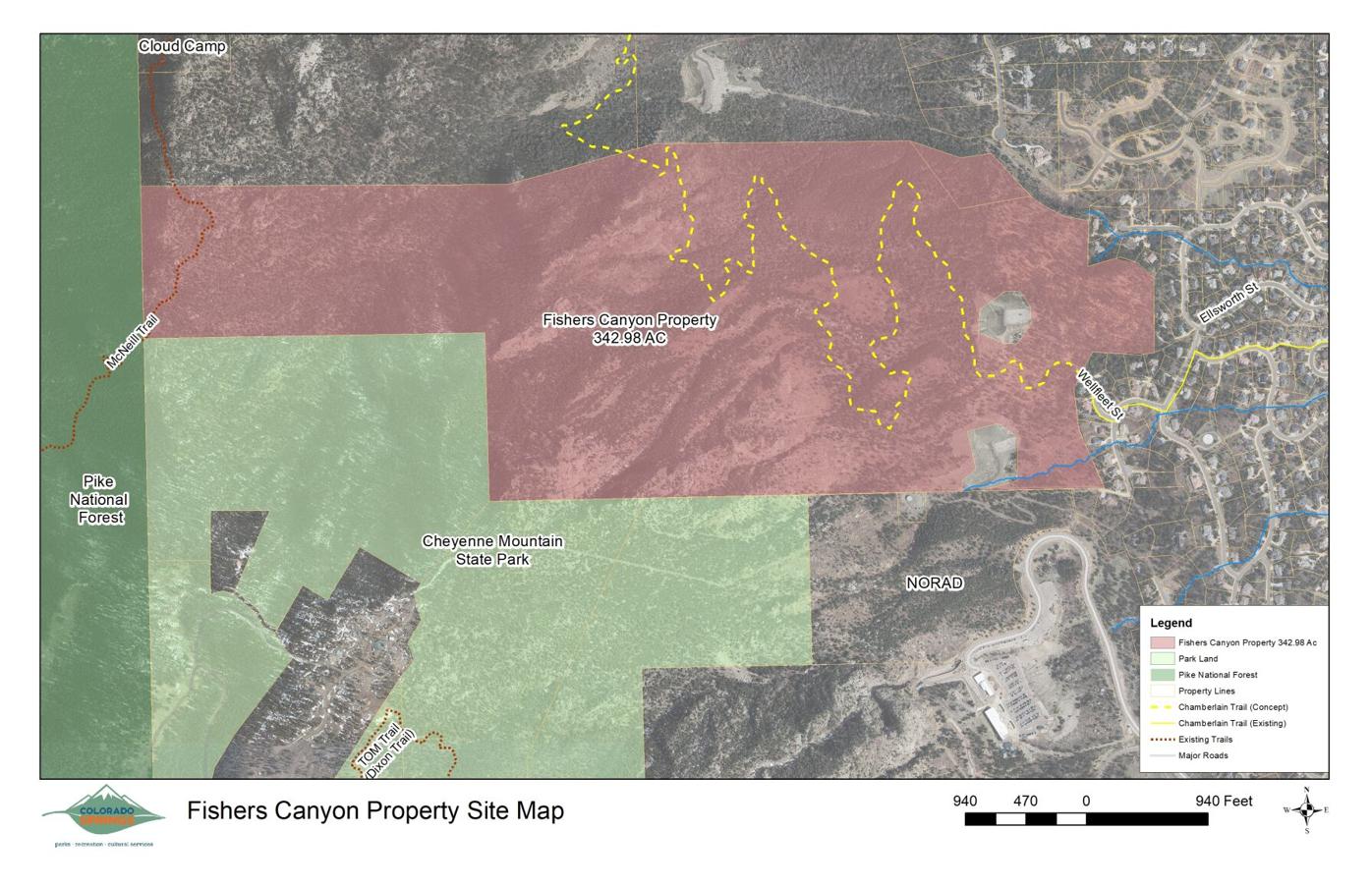 A map of the city of Colorado Springs’ proposed purchase of Fisher Canyon in the southwest foothills.

Colorado Springs parks leaders have a deal in place to buy a major chunk of land along the city's southwest foothills.

Referred to as Fisher Canyon, the proposed 343 acres start from a meadow behind the Broadmoor Bluffs neighborhood and rise to ponderosa pine forests and granite outcrops bordering Cheyenne Mountain State Park to the south and Pike National Forest to the west.

On Monday, City Council will hear a presentation about a two-part purchase amounting to an anticipated $4.2 million out of the Trails, Open Space and Parks (TOPS) budget.

The TOPS working committee — members representing the program that collects sales tax portions to acquire and develop recreation lands — have unanimously approved the first part of the purchase: about $1.5 million for the majority 258 acres. The Conservation Fund has agreed to buy and hold the entire parcel while TOPS restores already-drained funds to reimburse the rest of the cost to the nonprofit in 2022.

"It's absolutely worth it," said Richard Skorman, City Council president, who compared Fisher Canyon with Stratton Open Space, boasting "lots of meadows" and "very healthy trees" and offering both leisurely and rigorous recreation across almost 2,000 vertical feet. He foresaw future trails taking pressure off Stratton and other popular preserves.

"Having said that, it's a good case to be made for increasing TOPS," Skorman added, referring to the choice voters will have next month to double the program's sales tax allotment. "We don't ever want to say no to something because we don't have the money today."

Fisher Canyon emerges on the heels of a busy year of spending for TOPS.

The program has annually built in between $3 million and $3.5 million for open space acquisition, a category determined by the voter-approved initiative that also sets aside certain percentages for maintenance and operation. In total, TOPS has worked with a budget of about $9.5 million in recent years.

Thus, funds tend to stack up. But "in 2020, many of those open space dreams came true," Haley said.

"So now we're back in the rebuilding process," Haley said. "This property came along, and 343 acres with development potential, you can't hesitate. And it's really the partnership with the Conservation Fund that makes it all possible."

The organization that has helped secure more than 280,000 acres in Colorado since the 1980s is no stranger to the city. The Pikeview deal is a recent example of partnership.

"This is a very typical role for us," said Justin Spring, the Conservation Fund's statewide coordinator based in Boulder. "We can often move more quickly than local governments or state or federal government partners."

Spring, a Colorado College graduate, said he and city officials moved fast after hiking Fisher Canyon together this summer. For several years, the land now held by Cheyenne Mountain Bluffs LLC has been eyed for home building.

Spring and Haley said the owner obliged to "stand still" on offers while they sought a land survey, appraisal and environmental review.

"Sometimes you pull out an old puzzle and you're like, 'Oh shoot, one piece is missing. Where is it?'" Spring said. "Fisher Canyon to me is that missing piece."

The city indeed sees the swath "filling a gap" in the western mountain backdrop listed as a top preservation priority in the 2014 park system master plan. Officials also see Fisher Canyon as key to connecting Chamberlain Trail, long envisioned as a 26-mile tour of the backdrop between Blodgett Peak and Cheyenne Mountain.

"Not only Chamberlain Trail, but then the opportunity to connect into Cheyenne Mountain State Park and the Top of the Mountain Trail," Haley said, referring to the loop reached after a long, hard ascent on hiking-only Dixon Trail.

Dixon "right now is limited, because mountain bikers and equestrians can't use the very top," Haley said. "If there was a way to connect up there, that would be fantastic."

Bob Falcone, TOPS working committee's chairman, called the possible acquisition "a great opportunity." Though, in visiting the base of the proposed land from Broadmoor Bluffs, he said he expressed concern for potential access.

Following City Council review Monday, the proposal is set to move to a vote by the parks board Thursday. City Council could decide on the purchase later this month.