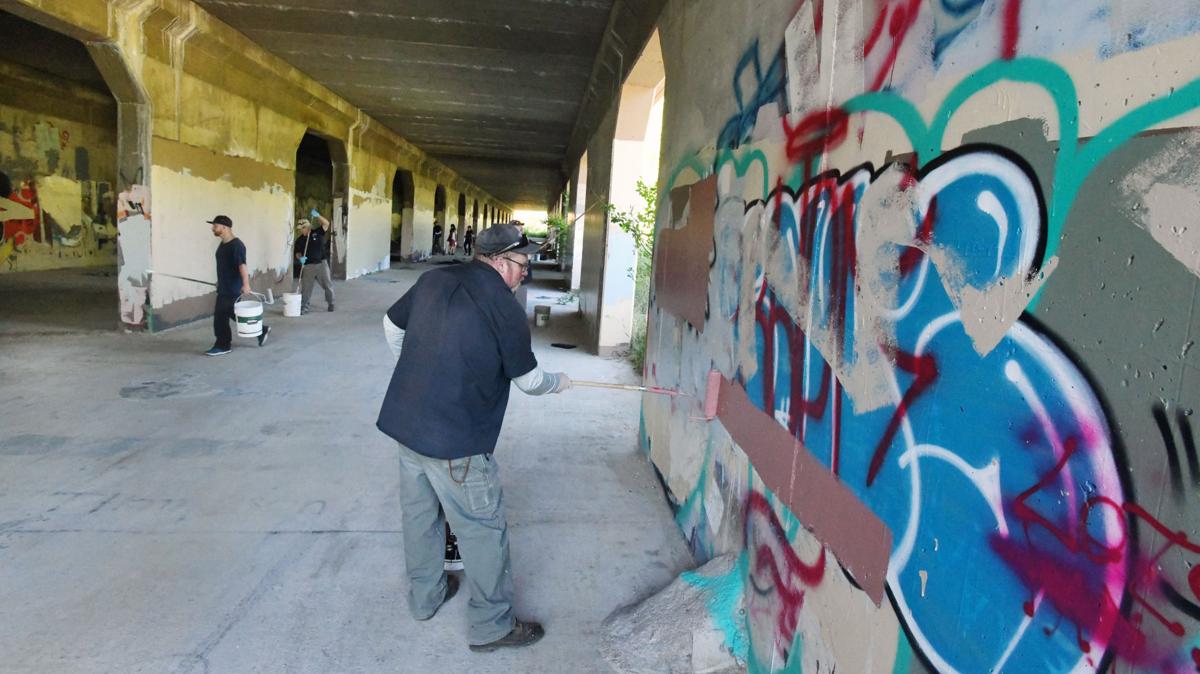 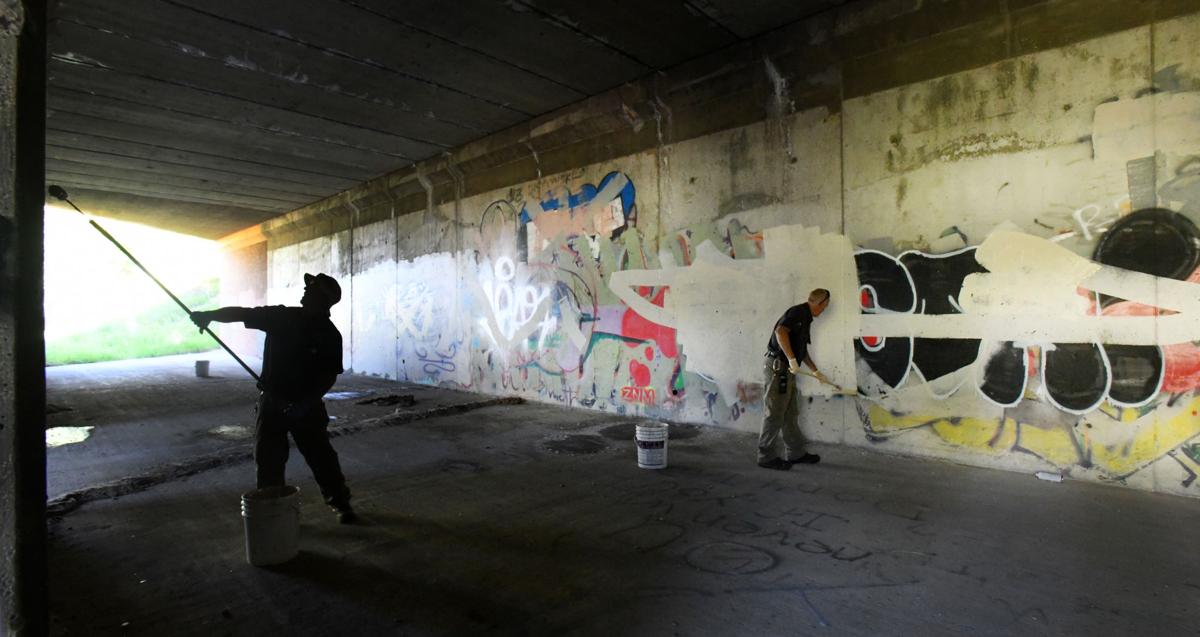 All is quiet on the northern front.

For now. But a silent battle wages. After dusk settles over the city like a nightshade, spray paint-armed vandals melt into the shadows, where they relentlessly aim their cans at private property, concrete tunnels, traffic signs, bus stops and brick buildings. These are no Jean-Michel Basquiat or Jackson Pollock-like pieces they create, though. It’s straight-up graffiti — writings or drawings done without permission of the property owner.

As the sun returns to its throne, the other half of the battle ensues, when the buffers emerge with their arsenal of tools — a sandblaster, soy-based paint remover and cans of paint — to clean up the unwanted aftermath: Gang’s marking their territory, names and initials, pithy phrases and impotent threats.

Nicknamed the buff, because they buff and clean things up, these eight men are officially the Quality of Life Team with the city of Colorado Springs’ Neighborhood Services department. They scour the city for graffiti and clean up homeless camps.

“Graffiti frustrates me to see on public property and other people’s property,” said Pedro Laumbach, a senior maintenance tech. “Graffiti in Colorado Springs is equal to a city of the same size and population, but we’re aggressive in covering it up, so you don’t see it as much.”

Five thousand graffiti calls pour in every year. From January through May of this year, the team cleaned up more than 1,500 tags in almost 400 locations, including nearly 200 gang tags in more than 40 locations.

An oppressive July morning finds most of the team out in force on a big assignment: The graffiti-pocked underbelly of a bridge near Criterium Bicycles on Corporate Drive, running parallel to the Santa Fe Trail. Many a homeless person has congregated under here, with its impressive protection from the elements, but the long concrete corridor is empty today. Only the sounds of quiet determination fill the cool air, as the buffers methodically paint over the layers of graffiti, working to muffle the voices of illegal artistic expression.

Neighborhood Services Manager Mitch Hammes is a longtime soldier in the crusade against graffiti. He’s worked in code enforcement for two decades, both in the Springs and Phoenix, Ariz.

“It’s a rebellion, their stand against authority,” he said. “They could be marking territory. Sometimes it’s an artist wanting to do art.”

But this isn’t art. Definitely not the hostile “(Expletive) buffers” slapped on one wall, nor the yellow swastika on the cold concrete floor. Neither is the spray-painted depiction of Minnie Mouse, which buffers previously covered up with a giant storm cloud-gray X, something they resort to doing when they don’t have enough paint to cover the whole thing. Same goes for the almost unreadable word “Valhalla,” from Norse mythology, on the floor near the swastika. Valhalla is the hall ruled over by the god Odin, who welcomed only the souls of heroes who died in battle or via other noble routes. This concrete corridor seems a far cry from Valhalla.

“The murals in Knob Hill are giving out the right message that art is beautiful,” said Laumbach, referring to the Knob Hill Urban Arts District, a grassroots initiative to improve the Knob Hill business district through approved and legal street art. “But not somebody’s last name on a wall. That’s not art at all.”

The buffers make quick work of the dirty walls, all with the unspoken knowledge that though they’ve won this round, the ones who see a canvas in the concrete will be back. The cleanup crew will return at some point in the future for another paint party, but no matter. It feels good to chalk up a win right now.

“We don’t want to encourage it,” said Laumbach. “(If we don’t) it will encourage taggers they can do it anywhere. We take it really seriously. Any chance we can keep it from spreading to businesses on top of the street — that’s our main goal.”

Thwarting graffiti artists is so important to Laumbach that he once spent a stretch of time waking up early enough in the morning to cover up the fresh marks of one particular vandal. It was gratifying to know the tag wouldn’t see the light of day and would hopefully frustrate and discourage its creator.

“In areas where taggers tag, if we can remove it in 24 hours, taggers learn it’s no good to put it there since it will be gone tomorrow,” said Hammes. “The city’s just going to remove it.”

Prior to 2007, graffiti cleanup was the mission of a nonprofit organization working through the Colorado Springs Police Department.

“They did the best they could, but they couldn’t keep up,” said Mark Davis, code enforcement supervisor for the city. “They wanted quicker response to graffiti calls and getting the city cleaned up.”

In an effort to better address graffiti removal, a pilot program was born in 2007 and Davis got the job. It was one man, a truck and cans of paint donated by El Paso County Solid Waste. The job was originally through CSPD, then transferred to Neighborhood Services four years ago.

“I loved what I was doing,” said Davis. “I knew I was making a difference. The first year, in 2008, we cleaned up over 33,000 tags. I couldn’t go a block without stopping and cleaning up graffiti when I first started.”

After six months, the job description expanded to include property abatements for people who didn’t cut their weeds or remove trash, and in 2014 two part-time employees came on board to clean up homeless camps. Eighteen months ago the crew got full-time positions for homeless cleanups, which has become priority No. 1 for the team. They spend their morning doing property abatements and camp cleanup, and devote a few hours in the afternoon to sweeping away any trace of graffiti noticed by code enforcement officers or reported by the public to the graffiti hotline or through the online code enforcement complaint form.

“We handle the dirty work nobody wants to do,” said Laumbach.

Another day, another tag

A couple of hours past sunrise on a Monday morning, senior maintenance technician Garry Moore stands outside Greg Bigelow’s house in a southeastern neighborhood near Southgate Shopping Center. He’s got the big guns ready to fire: the sandblaster, a huge tool every member of the graffiti removal unit has a crush on. It pummels the ugly paint off concrete, brick and wood.

“We love it,” said Laumbach. “Everybody’s trained on it. It’s loud. It’s powerful.”

Moore dons a medical mask and earplugs as he prepares to blast off a sidewalk tag eulogizing a 25-year-old gang member who died in the past year or two, according to Bigelow: “RIP buddy & Tonu,” or something to that effect. It’s often hard to make out the exact words in a tag. The blaster burns off the black spray paint in a matter of minutes, leaving a fresh layer of concrete. It’ll take a few weeks for it to match the color of the surrounding sidewalks, but the removal is free for the homeowner.

“That looks great,” said Bigelow. “It’s sad the reason it was there. It does look nice, a lot better than the rest of (the sidewalk).”

Bigelow has a second graffiti tag on his property, an “I love u Greg” on a short brick wall that he doesn’t want removed. The only problem? Graffiti is against city code, so it’ll have to come off at some point, though he might be able to circumvent the issue by removing the painted bricks and saving them elsewhere.

Tracking and catching graffiti artists is all part of the gig, an important part, as each tag costs an average of $55 to remove.

“We take it seriously,” said Laumbach. “You might think it’s a simple tag, but they add up.”

After a particular tag — somebody’s last name, for example, or initials — repeats five to six times, the unit starts tracking them. After 25, an arrest warrant is issued for criminal mischief, which could result in jail time or community service. Laumbach remembers one vandal who got caught and did his community service with the removal unit. By the end of his stint, he’d had a change of heart about marking up other people’s property.

It takes some leg work to nab the bad guys and girls (oh yes, women also like to wield a can of spray paint), but it does happen regularly. They’ve charged perpetrators more than $50,000 in restitution since 2008.

“It makes me feel good,” said Davis. “With the size of this city, we have a very graffiti-clean city and I’m proud of that. They do a good job.”