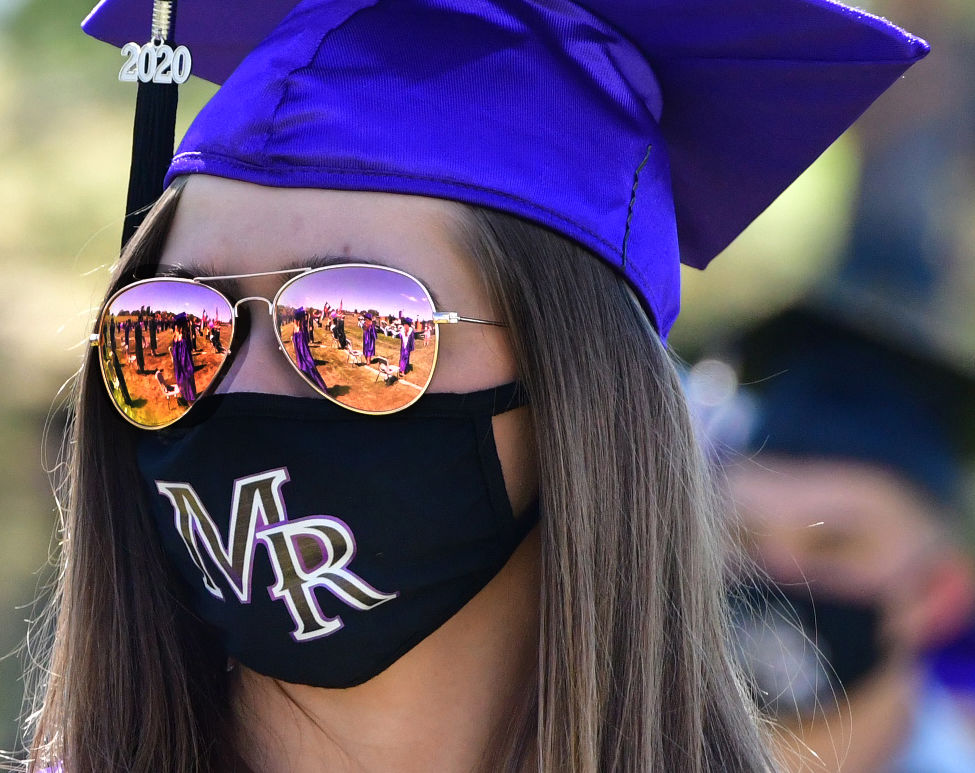 It's been such a tough year for graduating high school seniors, that many didn't think that an in-person graduation would be possible. Mesa Ridge High School held their ceremony at their football practice field on Thursday, June 11, 2020. Everyone wore matching specially made "MR" masks and they sat six feet apart. (Photo by Jerilee Bennett, The Gazette) 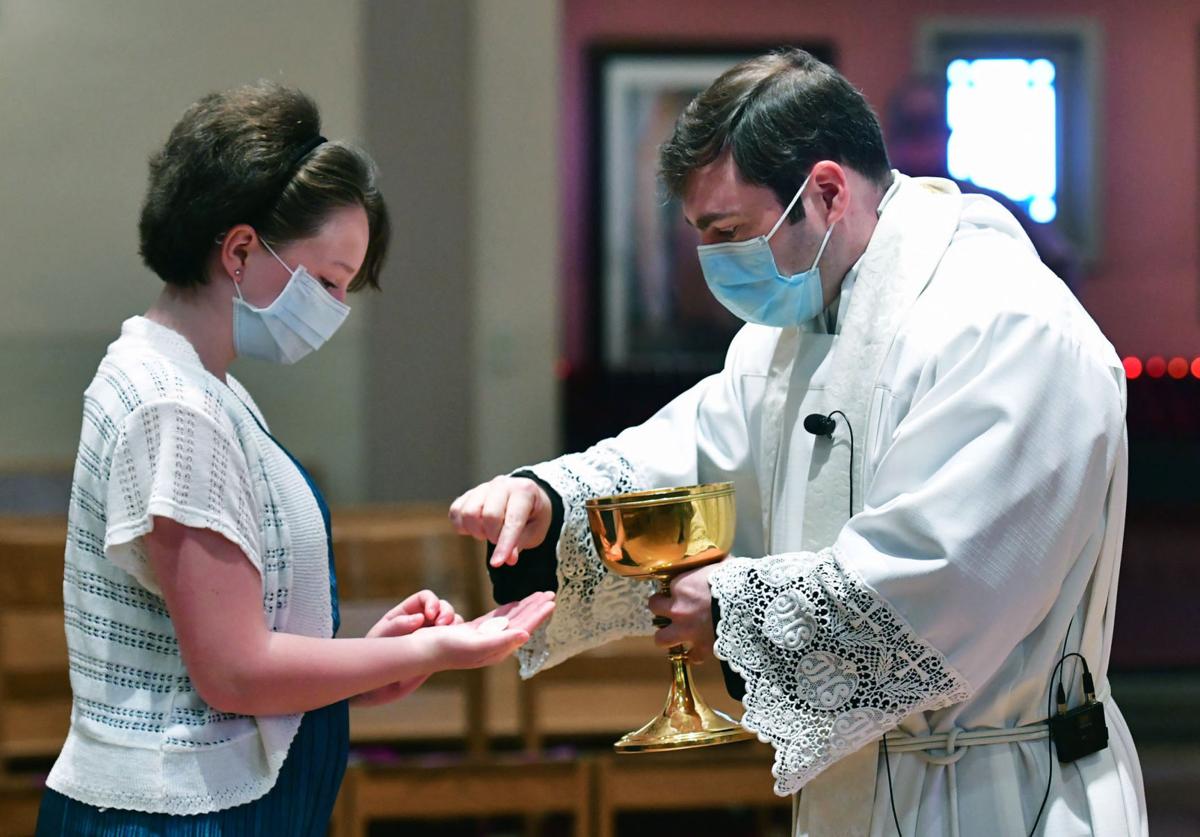 For the first time in two months, in-person masses were held at Catholic churches in Colorado Springs. A parishioner is given the Eucharist by Very Rev. David Price at St. Mary's Cathedral on Sunday, May 17, 2020. After the receiving the Eucharist, the parishioners were exit the church. (Photo by Jerilee Bennett, The Gazette)

It's been such a tough year for graduating high school seniors, that many didn't think that an in-person graduation would be possible. Mesa Ridge High School held their ceremony at their football practice field on Thursday, June 11, 2020. Everyone wore matching specially made "MR" masks and they sat six feet apart. (Photo by Jerilee Bennett, The Gazette)

For the first time in two months, in-person masses were held at Catholic churches in Colorado Springs. A parishioner is given the Eucharist by Very Rev. David Price at St. Mary's Cathedral on Sunday, May 17, 2020. After the receiving the Eucharist, the parishioners were exit the church. (Photo by Jerilee Bennett, The Gazette)

Colorado Springs city leaders are considering requiring that masks be worn in public in hopes of slowing the worsening COVID-19 pandemic and averting tighter restrictions or renewed shutdowns of local businesses.

A proposed mask mandate is on the Colorado Springs City Council’s agenda for Tuesday, but it’s “very unlikely” to come to a vote, council President Richard Skorman said Sunday. The El Paso County Public Health officials are set to address the county Board of Commissioners on Tuesday, and the council wants to hear its stance on masks.

“We only want to do what is recommended by the experts,” Skorman said. “We probably would (support a mandate), if the health department wanted us to.”

The debate over requiring masks in public comes as COVID-19 infections are on the rise across the U.S. and Colorado, leading some local governments here to make wearing masks mandatory to avert tightened restrictions on businesses and public life.

“We are losing ground in our effort to fight COVID-19 based on numbers coming in over the last few days,” Colorado Springs Mayor John Suthers said Friday on Twitter. “This puts us at risk of losing our variances, which have allowed many businesses to reopen.”

In his remarks on Twitter, Suthers said he would support making masks mandatory if “it comes down to choosing between closing our businesses again, or putting a mask mandate in place.”

Local business leaders, including the Colorado Springs Chamber & EDC, have lobbied for a mask mandate, arguing it would make it easier for individual businesses to persuade their customers to wear them, according to Skorman.

“It really came from the business community,” he said.

Late last week, the City Council added a discussion item regarding a proposed mask law to its Tuesday agenda as a “placeholder,” in case county health officials were ready to request emergency action, Skorman said. But on Saturday, health officials clarified that they were preparing a wide-ranging COVID-19 update for the Board of Commissioners, which could include guidance on masks, he said. Skorman said the council might also postpone a discussion of masks set for its work session on Monday, pending guidance from the county health agency.

If health officials were to push for quick action on masks, the City Council could hold an emergency meeting later this week, and it has the power to implement such a law without a second reading, Skorman said.

Skorman said no action would be taken without public input. The eight other City Council members did not respond to emails asking for comment.

Although initially thought to be ineffective in preventing the spread of the highly infectious disease, health experts now advise that wearing a cloth mask is the best way of keeping those who are infected from spreading the disease to others, particularly if they have no symptoms or have yet to come down with them.

A copy of Colorado Springs' draft ordinance included with Tuesday’s council agenda raises the possibility that violators of a proposed mask law could face fines or even jail. Although no penalties are specified, the proposal says violations would be governed by the same part of city code that allows for fines up to $2,500 and 189 days in jail.

Skorman downplayed the possibility of such penalties, saying no one on the council was pushing for them.

“The hope is, if it’s put in place it would give people that extra impetus to comply voluntarily,” Skorman said. “I don’t think anybody’s looking for large fines or to put people in jail.”

Six of the most populous counties in the state have made wearing masks mandatory in public, hoping to slow a resurgence of COVID-19 in the weeks since Gov. Jared Polis lifted a stay-at-home order applying to most residents and closure orders applying to most businesses. El Paso and Jefferson counties are among the holdouts that have instead urged voluntary compliance.

The issue has fueled disagreements across the state, including in Pitkin County, where law enforcement agencies raised objections to a request by the county’s commissioners that they take a heavier hand in enforcing health orders.

“We’re here to assist, but I don’t think it’s our policing duty. I really don’t,” Pitkin County Sheriff Joe DiSalvo told the Aspen Times. “I don’t think this is a law enforcement matter.”

Angered by a public health directive to wear face coverings to reduce the spread of COVID-19, Douglas County commissioners last week ordered the county’s attorney to withdraw from the regional health department that implemented the rule.

“We question the enforceability and efficacy of the mask mandate order, believing that trusting our citizens and business community to continue doing what they do, without a mandate, is the best approach,” Commissioner Lora Thomas said.

Polis hasn’t ruled out a statewide mask mandate, but has yet to call for one. Instead he has urged voluntary compliance in forceful terms, telling state residents to “wear your damn masks.”

Since mid-June, the average number of people testing positive in El Paso County for the virus daily has increased steadily and has surpassed previous highs for average daily new cases set in April and May, according to county data.

“As wearying as it is, as much as we would like it to go away, it’s just not," Dr. Robin Johnson, medical director for El Paso County Public Health, said last week.

Health officials here warned that the state could opt to reimpose restrictions limiting public gatherings and shuttering businesses if infection rates continue rising. The county is still developing its full mitigation plan to slow the virus and has not submitted it to the state, she said.

"What we want to do is make these choices locally before there are any mandates that are needed," Johnson said.

Colorado Springs’ proposed law would require people 10 and over to wear masks in many public places, including city buildings, businesses, on-site service providers and “any public indoor or outdoor place where people are unable to maintain at least 6 feet from each other.”

Employers would be required to provide masks to employees, volunteers and any other workers in their places of employment.

The proposal, as drafted, would not apply to people exercising or swimming outdoors.

It also excludes people who can present a doctor’s note saying they have a pre-existing condition that prevents them from safely wearing a mask. People working in offices without co-workers and no face-to-face dealings with customers would likewise be excused.

The proposed ordinance change would go into effect upon passage through Aug. 14.

El Paso County, along with Jeffco, is among the populous counties along Colorado's Front Range where wearing a mask in public remains voluntary.