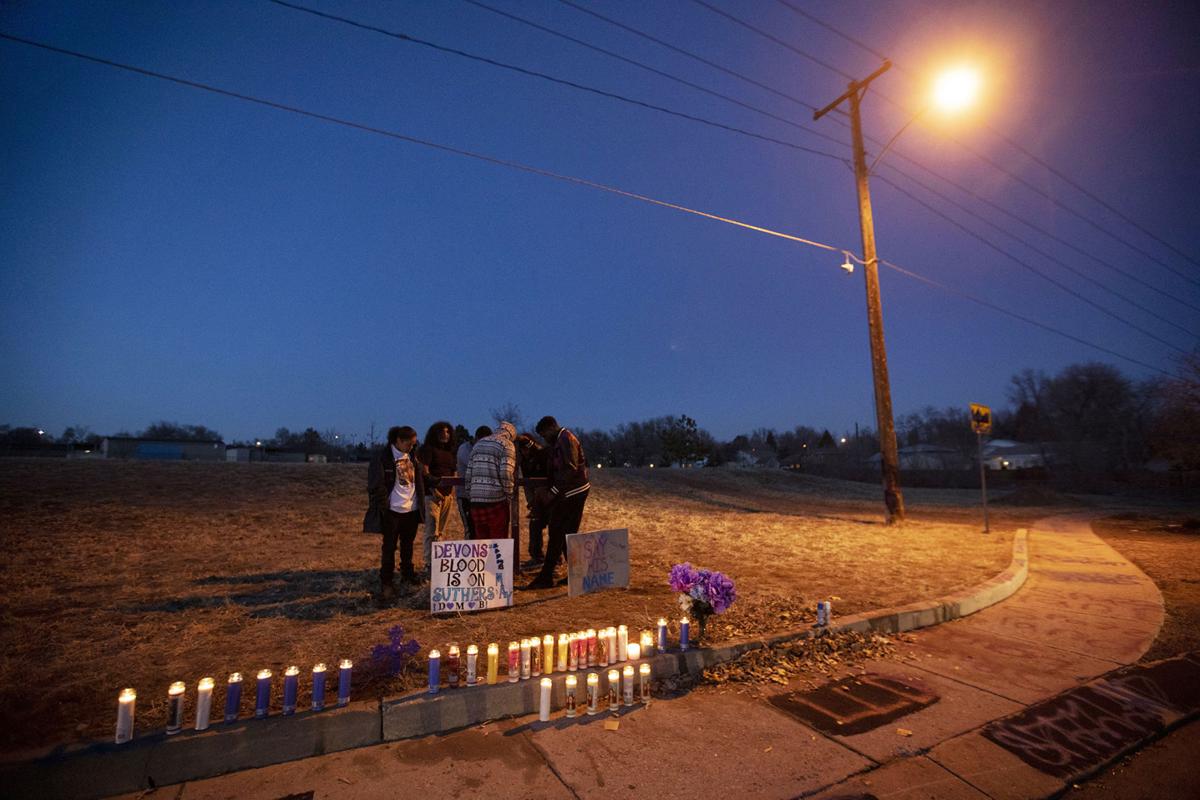 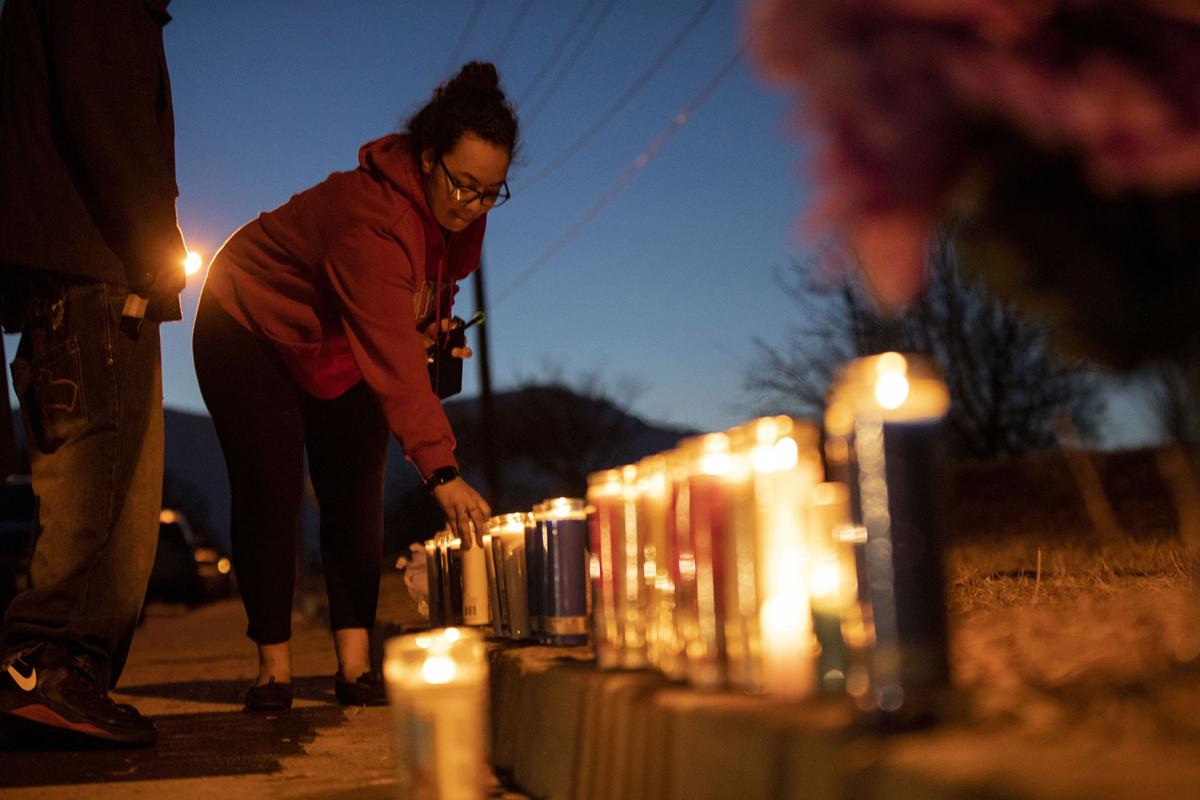 Candles are lighted by family and friends at De’Von Bailey’s memorial. 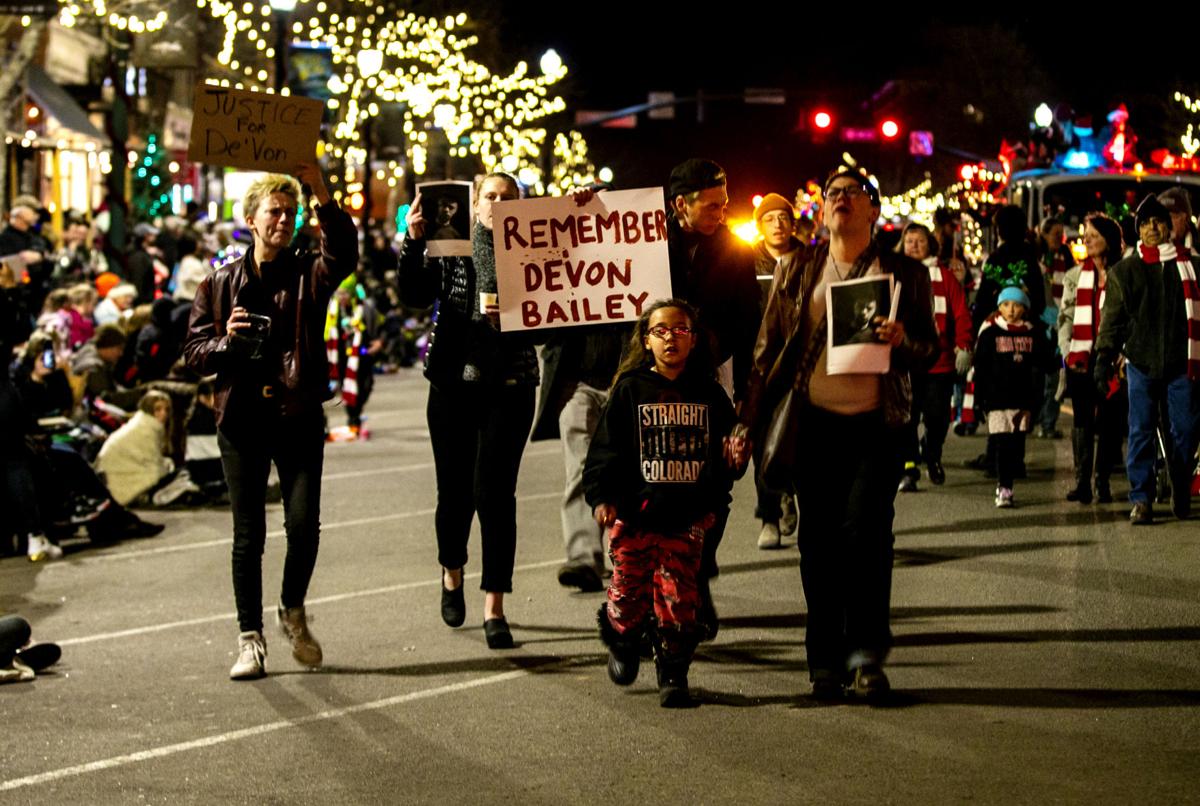 Protestors hold signs and yell chants for De'von Bailey during the 35th annual Parade of Lights in downtown Colorado Springs on Saturday, Dec. 7, 2019. The small protest happened after a memorial for Bailey was taken down by code enforcement workers and just days before the "Olympic City USA" sign was defaced Tuesday morning with a message related to the death of De'Von Bailey, who was shot and killed by police last summer. Below the sign's gold metallic flame, vandals tagged the words "De'Von will not RIP." (Parker Seibold/The Gazette)

Candles are lighted by family and friends at De’Von Bailey’s memorial.

Protestors hold signs and yell chants for De'von Bailey during the 35th annual Parade of Lights in downtown Colorado Springs on Saturday, Dec. 7, 2019. The small protest happened after a memorial for Bailey was taken down by code enforcement workers and just days before the "Olympic City USA" sign was defaced Tuesday morning with a message related to the death of De'Von Bailey, who was shot and killed by police last summer. Below the sign's gold metallic flame, vandals tagged the words "De'Von will not RIP." (Parker Seibold/The Gazette)

Residents urged the Colorado Springs City Council on Tuesday to apologize after code enforcement workers removed a streetside memorial for a 19-year-old black man who was fatally shot by police this summer.

The memorial — spray-painted homages, candles and crosses — had been along Preuss Road on the southern edge of Adams Park east of Prospect Lake since Aug. 3, when De’Von Bailey was shot four times in the back and arm as he ran from two officers.

Police have said the memorial was removed because of complaints from nearby residents about alcohol and marijuana being left there, although some people have disputed that reasoning.

“They took down a cross and candles set up in memory of a life that was lost at the hands of Colorado Springs police,” Candace Woods told the City Council. “It was horrifying to me. I’m here to remind you that De’Von Bailey — his name will not stop coming out of our mouths as a community because he and his memory deserved to be remembered. He deserves to have justice.”

The officers involved in the shooting, Alan Van’t Land and Blake Evenson, were investigating a report of an armed robbery in the area and had stopped Bailey and his cousin because they matched the description of the suspects.

Body-camera and surveillance video of the confrontation showed Bailey turn and run when one of the officers went to search him. After shouting several times for Bailey to raise his hands, officers opened fire. A handgun was found in his pocket, footage showed.

Last month, a grand jury unanimously found the officers involved justified in the killing — a decision that court documents show was based largely on the officers’ claim that they believed Bailey was going for a gun as he ran and fired in self-defense.

Councilman Bill Murray said during the Tuesday council meeting he was seeking more information about the memorial’s removal. “I’ve got concerns,” he said.

Council President Richard Skorman told The Gazette that code enforcement officials were likely following their normal procedures when they disassembled the display. “I think we need to be more careful about how we do this,” he added. “I certainly understand why people were upset.”

Perhaps city officials could work with Bailey’s family and friends to establish a “sanctioned” location for the memorial, Skorman suggested.

Hours after the memorial was removed, the candles, crosses and graffiti that marked the spot were replaced. Neighborhood residents gathered there Friday night.

“It is of great interest of me to understand why it was necessary to make a neighborhood that feels under siege feel even more bullied,” Rachel Stovall told the council. “The silence of the southeast city representative has added fuel to the fire.”

Councilwoman Yolanda Avila, whose district is in southeast Colorado Springs, shot back.

“It’s great to hear from you in person other than being attacked on Facebook,” she told Stovall. “You may say that I’ve been silent. But every council member here knows that I have not been. I just have not been bombastic and sensationalized the way some of you have been doing this.”

Avila said she asked for an independent audit after the shooting, as well as implicit-bias training. She called on other members of the council to support Skorman and her in efforts to address the community unrest that’s surfaced following the shooting.

“We’re working the best that we can, and we’re going to continue to do so. But we also need support of the rest of the council, who remain silent at times,” she said.

Councilman David Geislinger disputed Avila’s assertion that the council wasn’t unified. He added it’s the entire community’s responsibility to explore the deeply rooted economic, racial and cultural issues that have arisen in the wake of Bailey’s death.

“That’s not something that can be done with a singular, uniform, one-size-fits-all approach,” he said.

“I genuinely want to know why law enforcement doesn’t want to meet with NAACP or with pastors or teachers or community members who are engaged who care about this,” Andrew Millman told the council.

Skorman and several other council members said they would have liked to attend the meetings but weren’t aware they were happening. A city staff member has been directed to alert the council to such events in the future, Skorman said.

Parking in downtown Colorado Springs and Old Colorado City is going to be more expensive beginning Jan. 1 as the city looks to generate more r…