The Colorado Springs City Council approved a $2.97 million settlement Tuesday in a civil lawsuit brought by the estate of De'Von Bailey, a 19-year-old Black man shot in the back four times by police in 2019.

The City Council voted 7-2 to approve the settlement that includes non-monetary provisions, such as anti-bias training, in the case that alleged wrongful death, denial of equal protection and excessive force. The case also claimed officers engaged in racially discriminatory policing.

In an interview with The Gazette, Lawrence Stoker, Bailey's cousin who was also stopped by police that day, said no amount of money would bring his cousin back. Stoker, 21, was not part of the settlement.

"I’m happy they’re getting the money, but I’m not happy that he’s dead — can’t no money replace that," he said, referring to Bailey's estate. "That’s a start but there’s a bunch more that could be done. Holding them accountable a lot more would be a big first step," he added, referring to the policy changes the city promised to make as part of the settlement.

In a statement, Delisha Searcy, Bailey's mother, said she hoped the non-monetary portions of the settlement would prevent similar deaths.

"My heart is broken at the loss of my son, but I am hopeful that the changes in the Colorado Springs Police Department will prevent another family from losing a child," she said.

The city agreed to provide at least two years of anti-bias training, meant to convey that race should play no role in an officers’ perceptions of risk, ensure that all officers’ personnel files are retained for the duration of the employee’s career and identify personnel who may require assistance or training to perform their duties, and to preemptively intervene and improve performance, among other measures, according to a statement from the family's lawyers.

The Colorado Springs Police Department in a press release said the settlement's non-monetary components were already in place before the settlement and are part of the department’s policies and practices.

"The very fact that so many big cases are being brought against the city of Colorado Springs for constitutional violation demonstrates that they need to change their conduct," Mari Newman, an attorney for the family, said in an interview with The Gazette.

The city framed the Bailey case settlement around insurance concerns.

Mayor John Suthers said the settlement was a "desire of the city’s excess insurance carrier to resolve the matter and eliminate any risk of a jury trial in Denver," according to a statement.

If a settlement was not reached, the city risked going to trial and paying any amount determined by a verdict over $1 million under the city's insurance policy. The insurance carrier cited an anti-law enforcement climate nationally and much larger settlements in other cases in support of the settlement, the statement said.

The Police Department's statement said "this settlement is not, in any way, an admission or indication of wrongdoing by these officers." Both Van't Land and Evenson are still working for the department, Lt. Jim Sokolik said.

"I think this is the way we stand behind the officers in this case," Suthers said in a news conference about the settlement. "They did not do anything wrong, and I feel very strongly about that."

Councilmen Dave Donelson and Mike O'Malley opposed the settlement, saying it was a failure of the city to stand up for the officers who were following their training.

"The federal government doesn’t pay hostage money. They don’t do it. ... I think we should stand up and do the right thing for our community," O'Malley said.

Donelson said the settlement could give the community the impression that officers had not handled the situation properly and that could be "disheartening and demoralizing" for law enforcement officers and citizens. 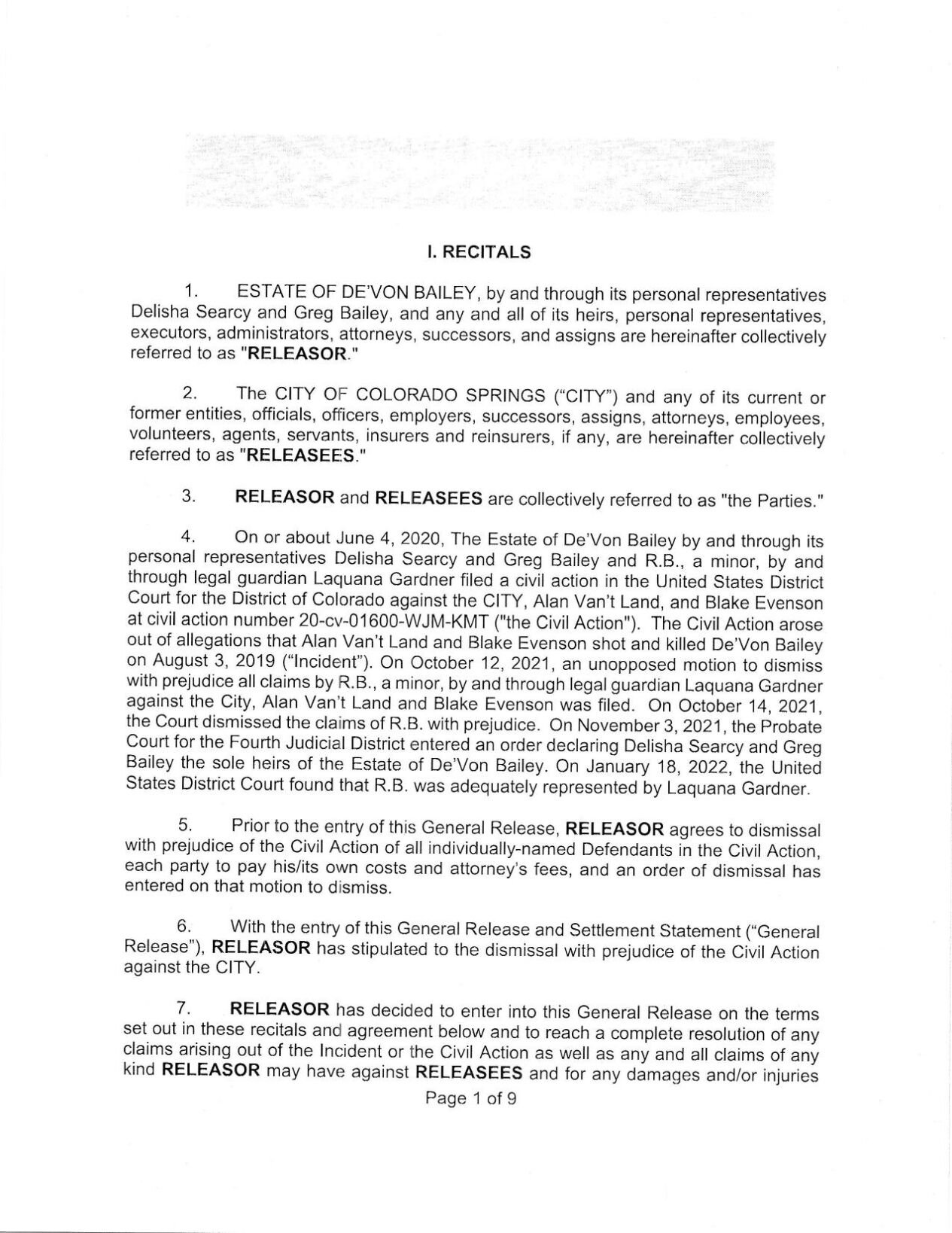 Councilman Wayne Williams defended the settlement, saying it was in the best interest of the taxpayers and that most civil cases end in a settlement.

"The fact that the city and the police department continue to claim that it was justifiable to kill this young man by shooting him in the back, as he was obviously running away, shows exactly why the mandatory training is so necessary," Newman said. "Some of these additional measures were necessary. And that's illustrated by Colorado Springs’ own conduct."

The high-profile case started when Bailey and his cousin, Stoker, were stopped by police investigating a report of an armed robbery on Aug. 3, 2019, in a neighborhood southeast of Memorial Park. Both were later found to be innocent of robbery.

Police body camera footage showed officers approach Bailey and Stoker, and question them about the reported robbery. When one of the officers attempts to search Bailey for a gun, he dropped his arms, turned and ran away, the video shows.

Officers Van’t Land and Evenson shot Bailey four times in the back and elbow, because they were reportedly fearful he was reaching for a gun.

The bodycam footage released by investigators confirmed Bailey was armed, showing officers removing a pistol from his pocket after he was on the ground in handcuffs.

The footage, along with video from a surveillance camera obtained by The Gazette, led to demonstrations protesting police brutality and claims of racism.

Councilwoman Yolanda Avila called the case an "eye-opener" that should move the city toward different policies.

"It’s incumbent on us to change something," said Avila, who asked for a public discussion and vote on the settlement.

Much more discussion on the department's policy is likely in the coming months because a comprehensive assessment of the Police Department's use of force is expected to be released in March. The newly formed Law Enforcement Transparency and Accountability Commission will be doing its own review of the study and steps the department takes following its release, Councilwoman Nancy Henjum said. The committee will also seek input from residents about the study, she said.

Jerima King, a resident who attended Tuesday's council session, called on the city to revise its rules and trainings to prevent deaths like Bailey's.

"He was being accused of theft. You don’t kill somebody over theft," King said after listening to the discussion about the settlement.

Another meeting attendee also expressed concern about O'Malley's framing of the settlement.

"Comparing a negotiated settlement to paying hostage money is entirely inappropriate and a slap in the face to the family of De’Von Bailey," Terri Urban said.

Conditions of the settlement

The Gazette's Jessica Snouwaert contributed to this story.

This story has been updated to correct a quote that was misattributed, and when the city agreed to pay $65,000 to settle a racial discrimination lawsuit in August.

VIDEO | De'Von Bailey protest on 1-year anniversary of his death

A federal judge has rejected the city of Colorado Springs’ attempt to halt discovery of evidence in the civil lawsuit over the death of De’Von Bailey, a 19-year-old Black man whom police shot in August 2019.