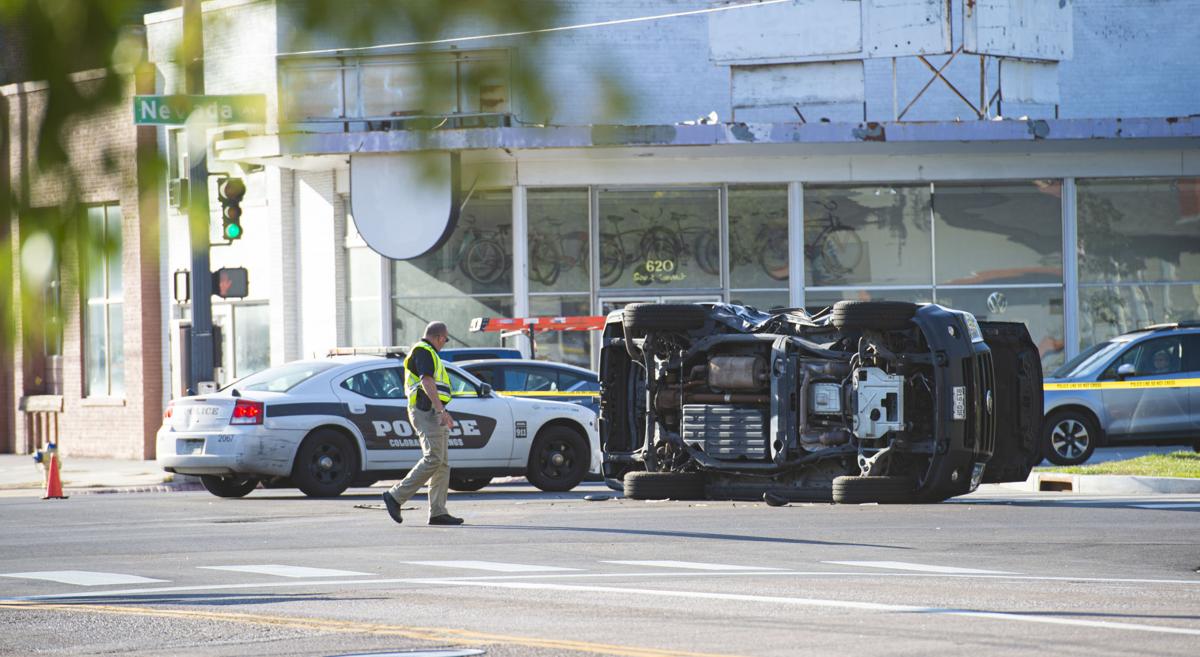 A vehicle lies on its side at 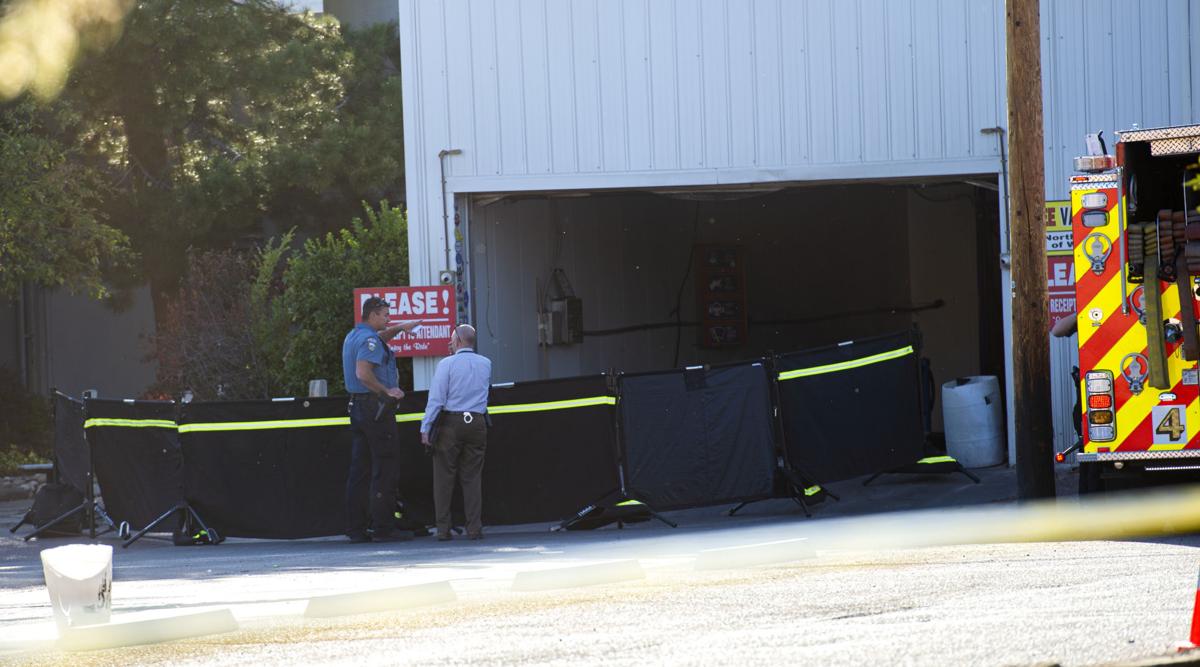 Colorado Springs police investigate the scene of a fatal shooting

at the Water Works Car Wash and Detail shop on South Nevada Avenue.

A man with a woman and child in his black Audi confronted another driver at the Water Works Car Wash about 3:40 p.m. Monday and was shot to death, police and a witness reported.

The shooter then fled but evidently changed his mind, broadsiding and rolling an unmarked police cruiser on his way back to the car wash, where he surrendered to officers.

The shooting is being investigated as a homicide, police spokesman Lt. James Sokolik said.

“This was a little traumatizing,” said car wash employee Jay Vaughan. “I mean… I’ve seen dirty, messed up crap, but that was the first time I’ve seen something quite like that. A shooting right in front of me.”

The dead man, whom Sokolik could not identify, was lying on the concrete just east of the car wash at 525 S. Nevada Ave., hidden behind a police barrier as investigators stood watch. The overturned cruiser remained in the middle of Nevada, well in sight of the Colorado Springs Police Operations Center.

Officers stood guard at intersections throughout the blocks-long crime scene, ushering passersby along and directing the slowed traffic along South Nevada.

Vaughan said he was checking the suspect’s receipt before washing his Chevrolet SUV.

“This black Audi comes screeching up, and I look at the dude getting out of the car. I can see he’s already aggressive,” said Vaughan. “I mean, his fists are clenched, his face is red, so I step back from the (SUV) because obviously it was not me that had done something.”

The man in the SUV said, “What, you following me?” Vaughan recalled. And the man approaching replied: “You know what.”

“That’s when he started punching the window, trying to open the door,” Vaughan said, visibly shaken and shifting from one foot to the other.

The woman and child in the Audi were watching the scene unfold as well, he said.

“He tried like eight, nine times, and it (the door) finally popped open, and that’s when he lunged in. That’s when I heard the first shot,” Vaughan said.

The man inside the SUV fired about six times, Vaughan said, and the reported aggressor was hit at least twice.

“From the driver’s side window to the back bumper is about how far he made it before he collapsed,” Vaughan said. “I’ve seen dead bodies before, but I’ve never seen somebody killed in front of my face.”

Sokolik said he did not have enough information to confirm those details, nor did he have any identifying information on the reported shooter.

“The victim here was driving southbound through the alley and for some reason exited his vehicle and then was shot by the suspect,” Sokolik said.

The gunman then took off in the SUV, heading south on Nevada Avenue, Vaughan and Sokolik both said.

While the path of travel was not immediately clear, Sokolik said, the driver turned around at one point and headed west on East Rio Grande Street approaching South Nevada Avenue, where an officer in an unmarked police cruiser was driving north.

“The suspect is at a high rate of speed, traveling westbound, and broadsides that police vehicle, rolling it, and then continues on westbound,” Sokolik said.

The officer was uninjured in the crash, he said.

“We do have a party detained,” he confirmed.