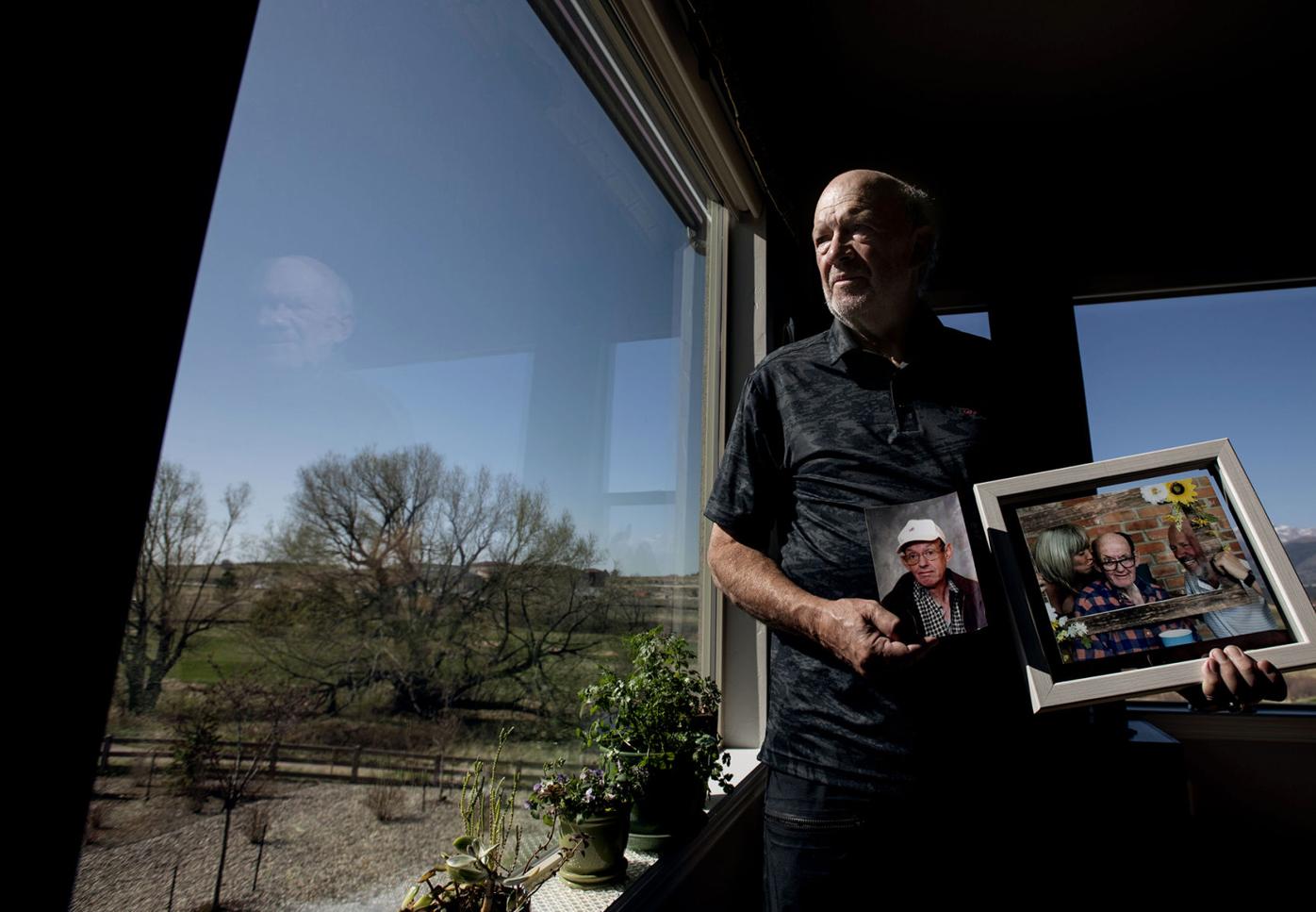 Dan Runingen holds photographs of his brother Dennis Runingen at his home in Colorado Springs, Colo., on Thursday, May 7, 2020. Dan contracted the coronavirus from Dennis, who died last month at 73. Dan and Dennis were in the same hospital two floors away. Dan held his brother’s hand as his life was taken by COVID-19.(Chancey Bush/ The Gazette) 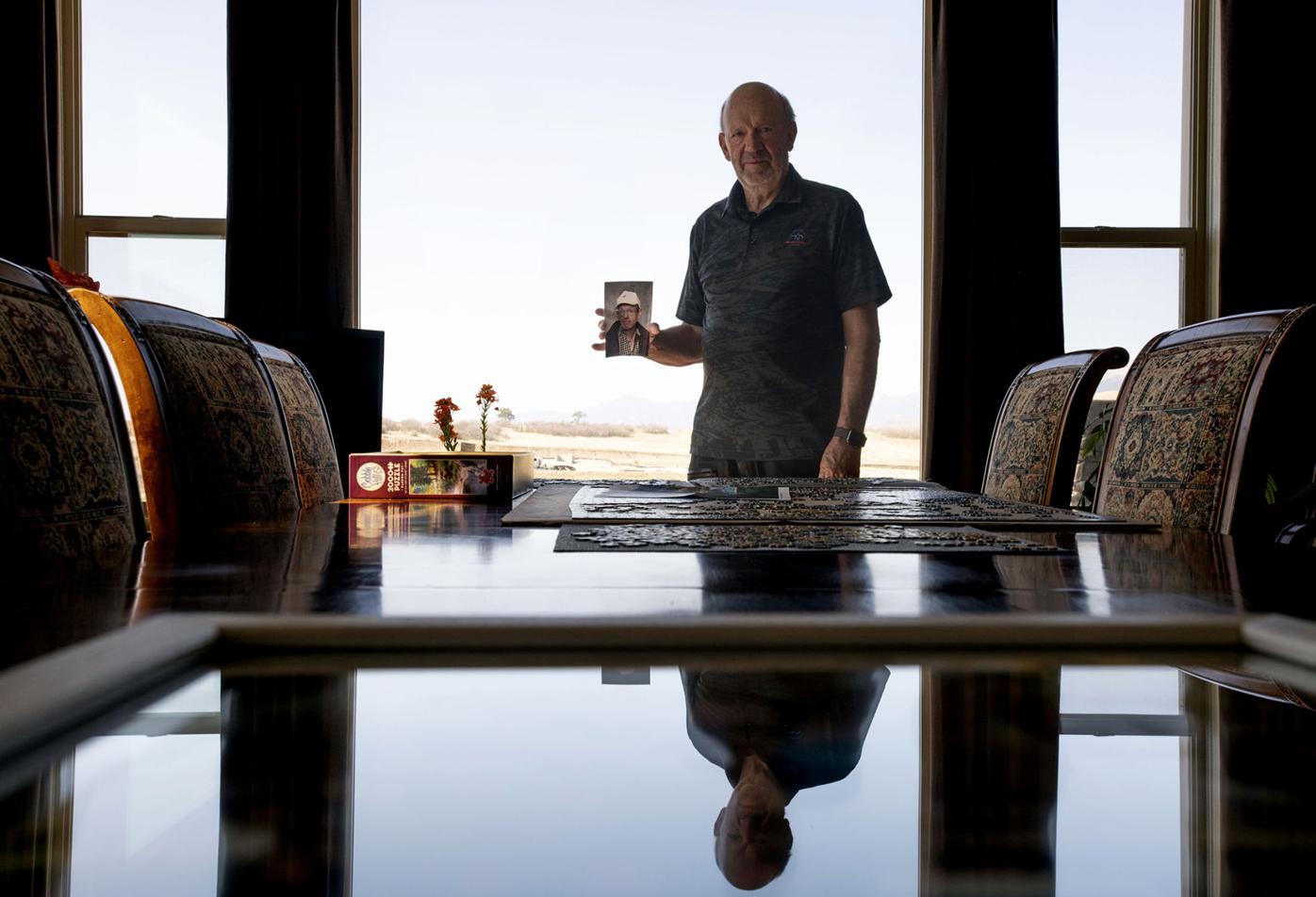 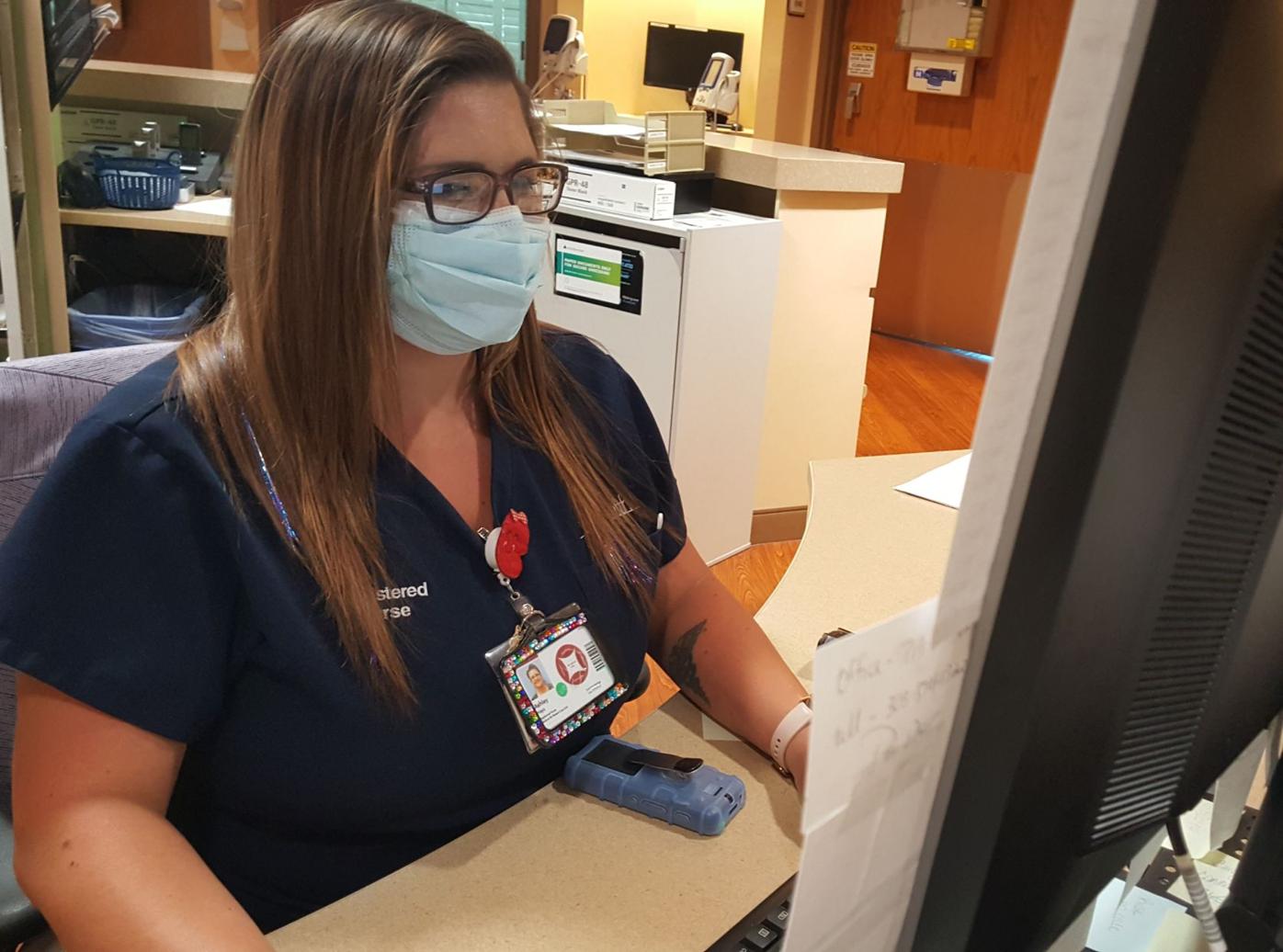 Registered nurse Ashley Hays was among the team treating Dan Runingen for COVID-19 at Memorial Hospital in Colorado Springs last month. She and other front-line workers coordinated visits between Dan and his younger brother Dennis, 73, who was being treated in the ICU, in the days before Dennis died from complications of the coronavirus, April 16.

Dan Runingen holds photographs of his brother Dennis Runingen at his home in Colorado Springs, Colo., on Thursday, May 7, 2020. Dan contracted the coronavirus from Dennis, who died last month at 73. Dan and Dennis were in the same hospital two floors away. Dan held his brother’s hand as his life was taken by COVID-19.(Chancey Bush/ The Gazette)

Registered nurse Ashley Hays was among the team treating Dan Runingen for COVID-19 at Memorial Hospital in Colorado Springs last month. She and other front-line workers coordinated visits between Dan and his younger brother Dennis, 73, who was being treated in the ICU, in the days before Dennis died from complications of the coronavirus, April 16.

Hearing is the last sense to go, the nurses said.

So Dan Runingen sat next to his brother’s bed in the COVID-19 unit at Memorial Hospital, held his hand, and spoke the words he hoped Dennis — and wished the world — could hear.

You should be proud of your life.

I admire you so much.

The only thing worse than being with a loved one as they take their final breaths, is not being there.

Closure is a rare thing in the age of coronavirus.

For Dan Runingen, 75, the virus he caught from Dennis, and which ultimately claimed his younger brother’s life, came with a kind of dark blessing.

“I was in the same hospital, two floors away. I could be with him, I could hold his hand,” Dan said. “I’m so grateful for the staff at Memorial, who made that happen. I know so many people aren’t able to see loved ones in person right now … "

He never fought in a war, climbed a mountain, or ascended corporate ranks. Nor did he marry, or leave behind children and grandchildren.

Coping with coronavirus around Colorado | Your personal stories

For 37 years, until he retired in 2015, Dennis washed dishes in the employee kitchen of The Broadmoor hotel.

“There’s not very many people on this Earth that would be able to wash dishes for 37 years straight,” Dan said. “But because Dennis was Dennis … he’d go to work, and it was, like, 'Hey! He was washing dishes!'”

Dan and Dennis spent their early years in Wisconsin and moved to the Springs in 1955, after tough financial times lured their father to Colorado, for work at the up-and-coming Air Force Academy.

Dennis was born with intellectual disabilities and struggled in school, never making it beyond the third grade. He worked for a while for his dad, a landscaper, and in his early 30s, “by some grace,” landed a job at the historic five-star resort, Dan said.

Dennis was the guy who took your plates and glasses when you were done eating, the guy who sat at the table right behind the cashier, where you paid before chowing down.

“I’m sure, people saw him there, and were, ‘This guy’s been here five years … and then 10 years … and then 20 years,’ and they wondered about him,” Dan said. “But Dennis loved his job. He was just a guy who really loved what he did.”

Wayne Hoskins used to plan his lunch breaks around Dennis so they could eat together, said Hoskins, the Broadmoor’s longtime head of security.

"Dennis was just a good ol' boy,” said Hoskins. “He was just so likable. He always had something nice to say. Everybody at The Broadmoor knew Dennis.”

Everybody, including Broadmoor CEO Steve Bartolin.

The Broncos made it to the Super Bowl, and Bartolin made good on his word, with a trip to the big game and a seat on the 40 yard line.

“There’s some guys out there that would have forgotten they’d promised that, but not Mr. Bartolin,” Dan said. “Imagine the star that made Dennis at The Broadmoor. He was the guy washing dishes back there. He wasn’t the head chef. And Mr. Bartolin honored him. That was about the biggest thing to ever happen to Dennis.”

Dennis had a very close relationship with their mother. When she passed away in 2002, Dan stepped into that role, speaking to his brother multiple times a day, taking him out for hamburgers a couple times a week, eventually helping him move into an independent living community in Colorado Springs, Winslow Court.

“Their relationship was beyond special, beyond brothers,” said Dan’s wife, June Chan. “Before Dan went into the hospital, Dan said, ‘I know Dennis has the COVID.’ I’m a nurse, and I said, ‘I don’t think so.’ But Dan intuitively knew. He just knew.”

When the coronavirus threat began to ramp up, Dan tried to explain what was happening. The idea of a pandemic was too abstract for Dennis to wrap his head around, until Dan started calling it “the bug.”

Dan believes Dennis didn’t understand what was happening — that he’d caught “the bug” — until after he was admitted to the hospital, March 28.

Dan was admitted to the second floor acute care unit for patients with the virus, two floors below the COVID-19 ICU.

“As soon as I got in there, I told them my brother was up there and I really want to see him,” Dan said.

He was expecting pushback, to have to plead his case. What he got was the opposite.

“I think that one of the most difficult things for all of our clinical teams during this crisis has been the visitor restrictions that have been applied in our hospitals,” said Tamera Dunseth Rosenbaum, chief nursing officer at UCHealth Memorial Hospital. “While we were required to do this for the safety of our staff, patients and families, it was an extremely difficult and unfamiliar experience for all of us.”

If Dennis had come in a year, or even two months ago, family and friends could have been at his side, throughout his stay, to support and encourage him.

With COVID-19, nurses and nursing assistants have taken on that supporting role for patients, said Rosenbaum.

“They spent hours at the bedside of our patients connecting them virtually to their loved ones. They held the hands of our patients and stayed with them so they would not be alone,” said Rosenbaum. “They held the phone up to the ear of patients so they could hear a familiar voice.”

But nurses also know they can never replace family.

Ashley Hays said she could think of only one other time when her staff got the chance to coordinate a visit between patients who were both being treated for COVID-19.

Being able to do that for Dan and Dennis “was absolutely incredible,” she said.

“It’s not every day, especially in this situation, with COVID going around and we’re not allowing visitors, and it’s very difficult to arrange visitors, unless they are in a situation like this,” said Hays, charge nurse for the COVID unit where Dan was treated. “To be able to bring families together during this trying time, that’s basically kind of what I got into nursing for.”

Hays worked with the staff on her unit, and with those treating Dennis, to make sure Dan was fully suited in protective gear could be safely taken up, without risking spread of the virus.

“The staff on Dennis’ unit and my unit, they just went overboard to make sure we could spend time together,” said Dan, who was able to visit Dennis on three of his last four days.

Because they both had the coronavirus, Dan said that once he was in Dennis’ room and the door was closed, he could remove his mask and gloves.

At first, he would hold Dennis’ hand and talk about what they would do when he got better — they’d go fishing, and out for hamburgers — and he could tell Dennis was there.

“I could see his eyeballs moving underneath his lids as I talked,” Dan said.

By the second visit, though, those subtle indications had stopped.

On April 16, after the family made the difficult decision to remove Dennis from the ventilator, Dan was there.

"Seeing someone that you love, who's dying like that ... it's just really hard to go through," Dan said. "But I'm so thankful I could be there. There are three people in my life I respect more than anybody else, and No. 1 is Dennis. I got to tell him that."

He held his little brother's hand, and spoke words he hoped Dennis could hear, for the three hours it took for him to pass.

You’re going to be able to see Mom now.

How Colorado avoided catastrophe as the coronavirus hit state

During Colorado’s monthlong statewide quarantine, the coronavirus’ spread slowed, deaths climbed, ventilators went unused and unemployment exploded. Which is to say, it went mostly as expected.