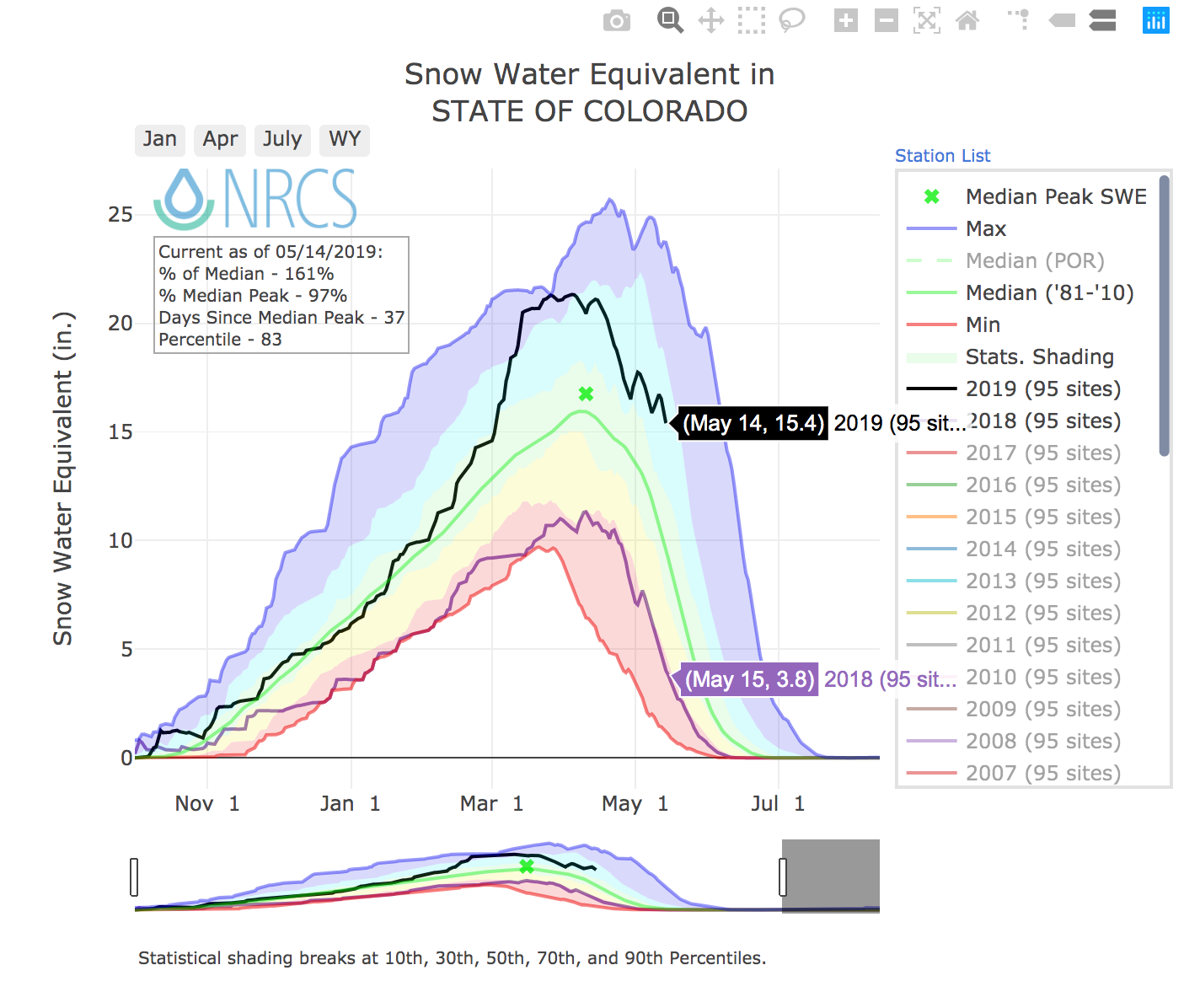 The snow water equivalent for Colorado. The black line is the snowpack for 2019, the orange line is 2018 and the green line is median. The green x is the median peak. Graphic courtesy of the Natural Resources Conservation Service. 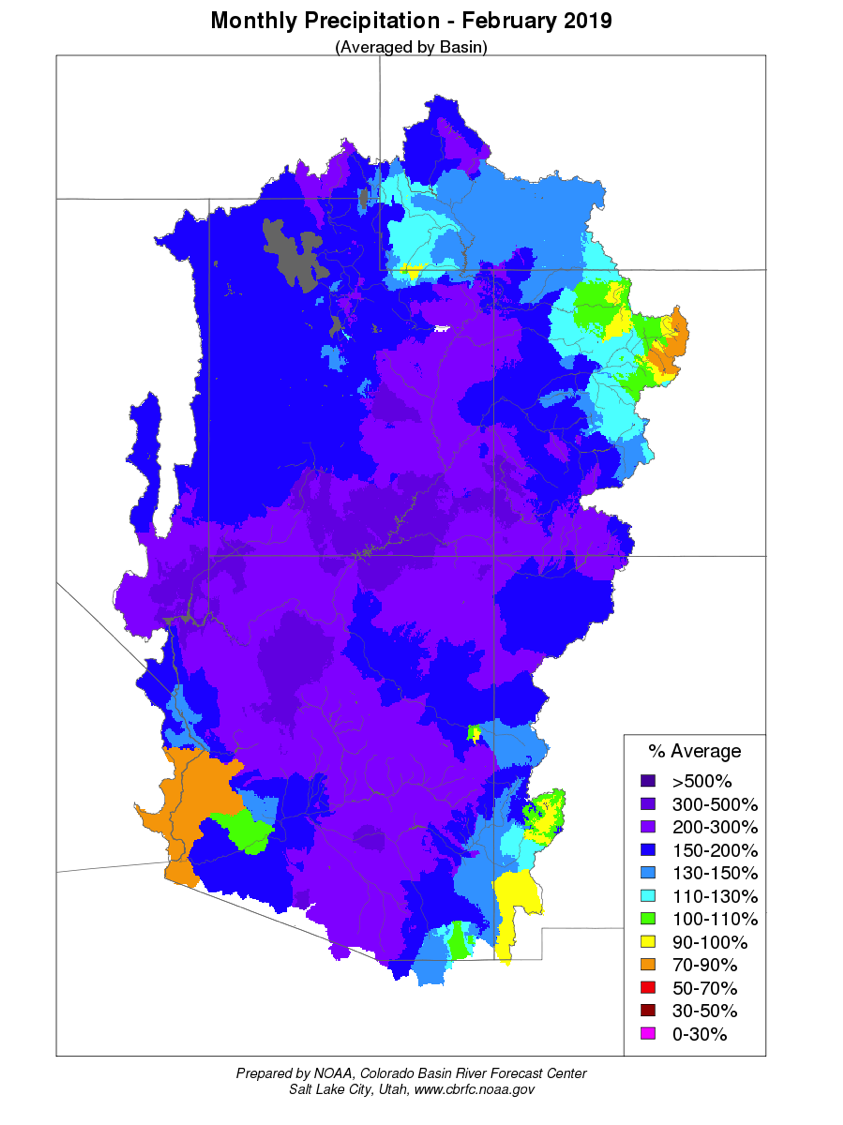 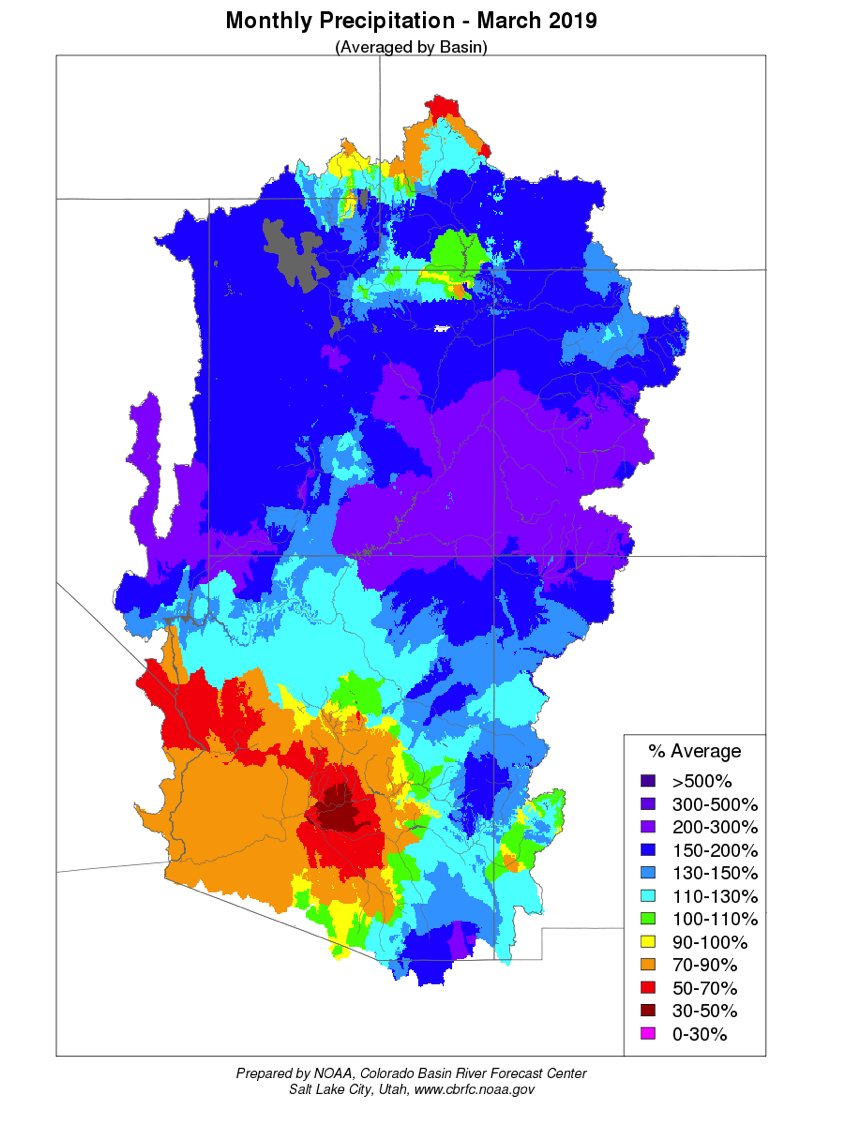 The snow water equivalent for Colorado. The black line is the snowpack for 2019, the orange line is 2018 and the green line is median. The green x is the median peak. Graphic courtesy of the Natural Resources Conservation Service.

Colorado is swimming in snowpack this year, with the state's southwest corner at 19.5 inches, 220% of the median for May 14 and 1.6 inches above the usual April 2 median peak, federal data show.

So reservoirs are filling, and the generous snowfall has nearly eliminated a drought that hydrologists said in January would take years for recovery.

"I don't see how you could order something better than what we got after a year like last," said Greg Smith, a senior hydrologist with the National Oceanic and Atmospheric Administration. "This is exactly what we needed."

Rocky Mountain among 96% of national parks suffering because of pollution, climate change

But this March was the third wettest in the Upper San Juan River Basin, with about 14.1 inches of snow water equivalent, Smith said. The record was set in 1979 with 17.3 inches, and the average is 6.1 inches.

Colorado's snow water equivalent dropped below its median peak of 16.8 inches for the first time April 28, 18 days later than usual. (The median is the midpoint between the highest and lowest.) But a storm at the end of April boosted the snowpack above peak — and the snow hasn't stopped. Flakes fell again last week across the state, though not enough to surpass the median apex again.

The contrast in Colorado snow levels year to year are remarkable at 15.4 inches versus 4.

Encouraging conditions are widespread in the Upper Colorado River Basin and across the Southwest, Smith said. The North Platte River Basin near the central Wyoming border reported 108% of its median snowpack Tuesday.

"Even in areas like the Yampa and Green rivers, which were running a bit below average to start, they caught up in the second half of spring," he said.

The drought that ushered in severe wildfires and dismally low reservoir levels is almost history, with about 84% of the state sated, according to the U.S. Drought Monitor, compared with 82% in need of a soak one year ago.

Since the U.S. Drought Monitor was established in 1999, the state always had some abnormally dry areas. Now, only 15.28% of the state is abnormally dry, and less than 1% is in a moderate drought.

Water experts did not anticipate the dramatic turnaround. Smith told The Gazette in January that runoff was expected to be below average because of the moisture deficit at the end of last summer.

"When the snowpack first started to accumulate, we thought, 'This is good, but will it be good enough to really recover the entire hydrological system?' But once the snow and cold came in February and March, it became more likely that we could see recovery in all of those buckets," Bolinger said.

Besides cooler, wetter conditions throughout the Southwest, the wind has blown in less dust, which can accelerate melting because of its darker color, a measurement known as albedo.

So far this year, three events have blown dust onto the 11 mountain passes tracked by the Colorado Center for Snow and Avalanche. By May 14, 2018, the research institute had reported eight.

"Our melt rate is going steady, and there's nothing too much to be concerned about," said Russ Schumacher, state climatologist and director of the Colorado Climate Center.

The wet, cool cycle appears to be continuing into late spring and summer, forecasts show. NOAA predicted a 50% chance of above average precipitation for most of Colorado through July, average temperatures for central Colorado, below average for the eastern plains and slightly above average on the Western Slope.

"The outlook going forward through the summer really continues to be tilting toward wetter than average," Schumacher said. "So at the moment, there's no suggestion that we're quickly going back to dry conditions."

Artifacts tell stories of the people that used them and the places where they spent their lives, says Arizona author Craig Childs.