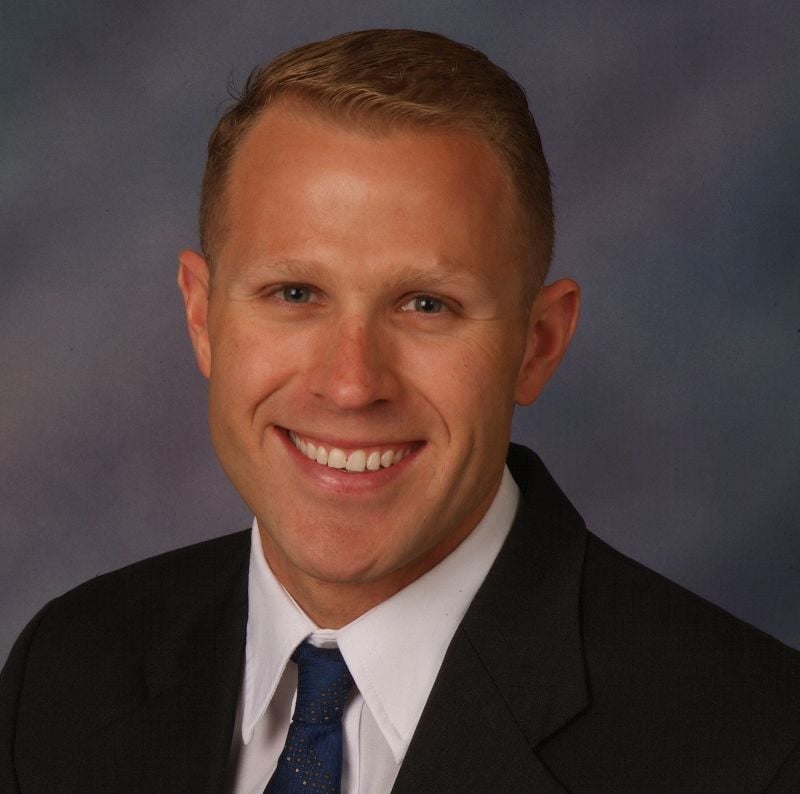 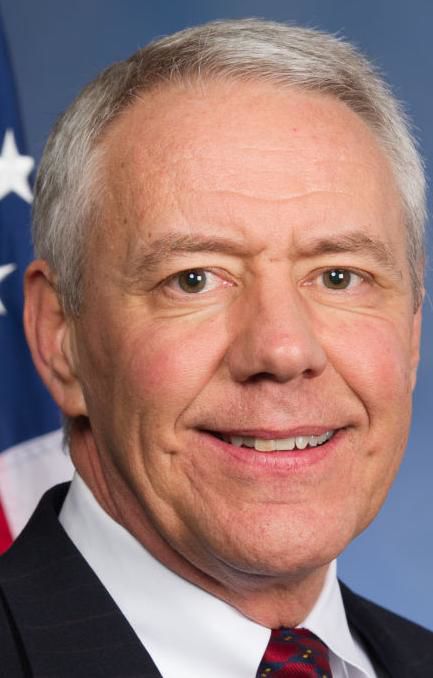 The Colorado Republican Party has become embroiled in controversy in recent days over a legislative district assembly held last month in El Paso County as the novel coronavirus outbreak was forcing the state's political parties to cancel in-person meetings and, instead, conduct business remotely.

The dispute revolves around whether the March 22 Senate District 10 assembly that designated state Rep. Larry Liston unopposed to the Republican primary was carried out fairly, or if another candidate should have also made the ballot.

But in the wake of high-level meetings of the state GOP's' governing bodies this week, the brawl has escalated to include threatened lawsuits, a possible criminal complaint and an accusation that state Republican Party Chairman Ken Buck, a member of Congress and former district attorney, instructed a party officer to violate state law.

"The action they demand I take literally requires me to commit a crime," Bremer said, adding that "everything is on the table," including possibly suing the state party.

In early March, Bremer notified delegates to the upcoming Senate District 10 assembly that they would convene remotely to decide which candidates to advance to the June 30 primary ballot.

Due to the mounting threat of the coronavirus pandemic just beginning to take hold in the state, the delegates would meet in a conference call on March 22 and cast their ballots by email, Bremer said, citing recently adopted emergency legislation and party bylaws.

According to paperwork filed by Bremer with the Colorado Secretary of State's Office, only Liston, who received 76% of the delegate vote, met the 30% threshold required to make the primary ballot. Stiver, with 24% support, came up short.

Two days later, however, Stiver and several of his supporters filed a complaint with the state party, alleging numerous irregularities they claimed deprived Stiver of a fair election, including what Stiver contends were constantly changing rules, a shifting number of credentialed delegates and the hacking of the email account set up to receive ballots during the middle of voting. 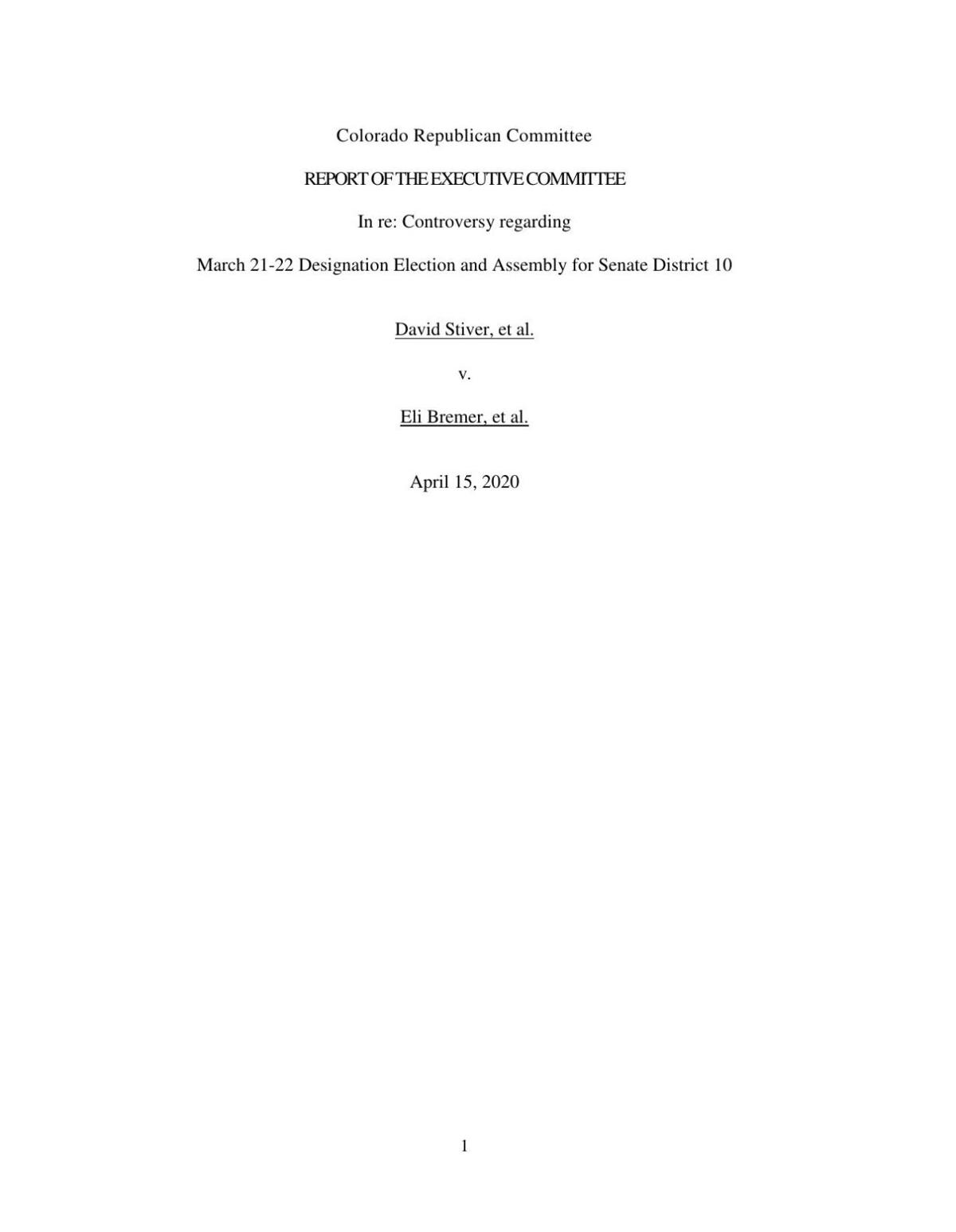 "The whole thing was a comedy of errors," he told Colorado Politics. "The one thing that I don't understand is why, when things started sideways, why didn't we just shut things down and regroup?"

Stiver said he was so disturbed by how the assembly had been conducted that he was considering approaching Colorado's attorney general to initiate a criminal complaint against Bremer for violating state election law by "holding a fraudulent assembly."

Bremer countered that the process was conducted fairly, but the state GOP's executive committee disagreed, finding that the assembly "was irregular to the point" that the committee lacked confidence in the results. Since the deadline to hold another assembly had passed, the panel ordered Bremer to file paperwork with the Secretary of State's Office naming Stiver to the primary ballot, giving him a Monday deadline to comply.

Bremer objected, calling the proceeding a "sham" that ignored the facts and relevant party bylaws. He insisted that what the committee was ordering amounted to breaking the law, since he would have to swear in an official state form that Stiver got at least 30% of the delegate vote, when he didn't.

In a recording of the central committee meeting obtained by Colorado Politics, Buck repeatedly asks Bremer if he understands the order.

"I understand that the committee has adopted a resolution that requires me to sign a false affidavit," Bremer responds.

Bremer said later that he had been informed by an attorney he could be sued by a district Republican if he files the paperwork putting Stiver on the ballot and that he was weighing his options.

"This is the position that my party has put me in," he told Colorado Politics. "The state party has not only commanded me to do something that is demonstrably not legal, they've put me in legal jeopardy."

In response to an inquiry from Colorado Politics, state GOP communications director Joe Jackson said in an email: "Both the CRC Executive Committee and State Central Committee looked into this matter and both voted to assign Mr. Stiver to the ballot. During this morning's meeting, Chairman Buck simply asked Mr. Bremer to acknowledge that he understood what the final decision of the committee was and asked that he abide by that decision."

Bremer is one of five candidates running for Republican National committeeman from Colorado at the party's state assembly and convention, which will be held online Saturday. Conservative talk radio host and tea party group founder Randy Corporon, who represented Stiver in the Senate District 10 controversy, is also running for the position, which holds a two-year term.

Former Secretary of State Wayne Williams, a Colorado Springs city councilman and an attorney who represented Liston in front of the executive committee proceeding, told Colorado Politics Friday afternoon that the state GOP was putting Bremer in an impossible situation.

"The only way you can submit paperwork showing (Stiver) getting on the ballot is by lying," he said. "If you submit a form saying someone got 24% of the vote, that doesn't put him on the ballot. There's not a way to submit a form honestly that does what they say he has to do."

Pointing to the form the party is ordering Bremer to submit, Williams noted that it requires a sworn statement affirming that "the information provided on this form is, to the best of my knowledge, true and correct."

"This is not an inconsequential statement that the chairman is asking be done," Williams said.

Jackson declined to discuss internal party deliberations but said in a text message Friday that "Chairman Buck stands by the decision made by the [executive committee]."

John Hickenlooper is the only Democrat guaranteed a spot on the June 30 primary ballot, qualifying by petition.