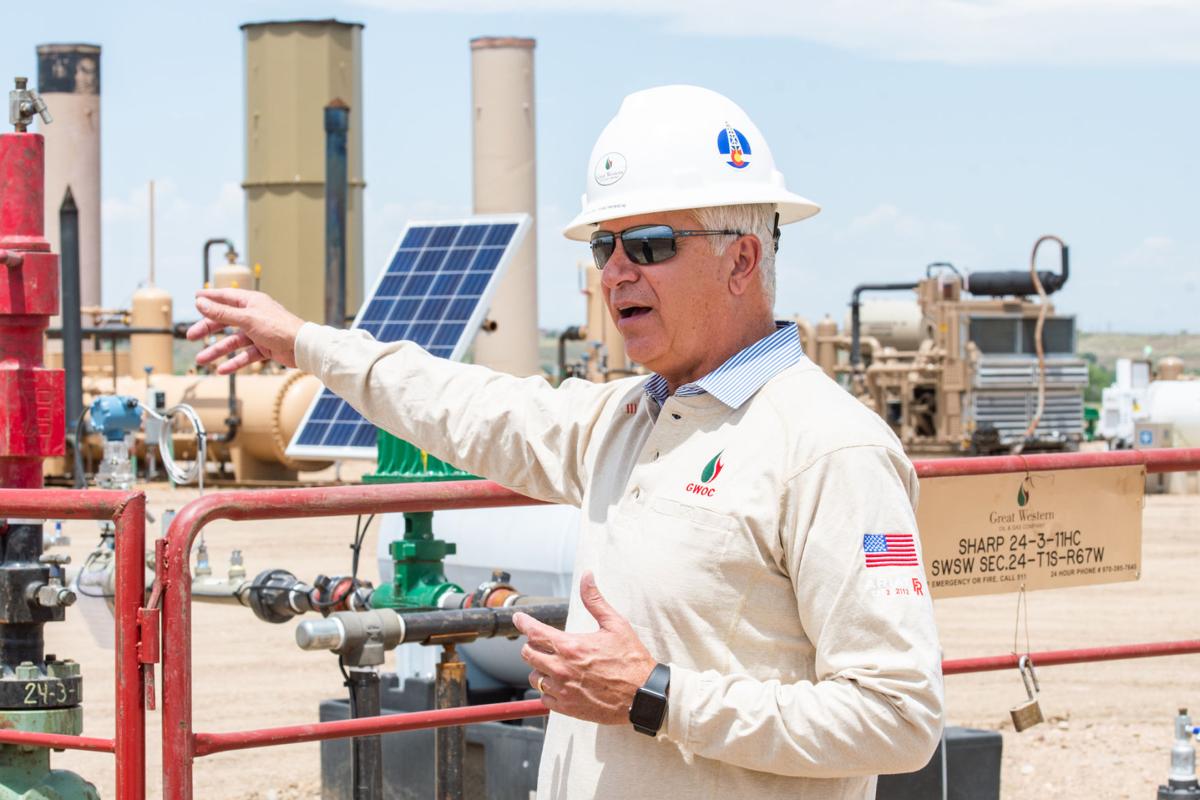 Rich Frommer, president and CEO of Great Western Oil & Gas Co., in Longmont explains the workings of an oil-and-gas site south of Brighton, on June 27, 2019, in Adams County. 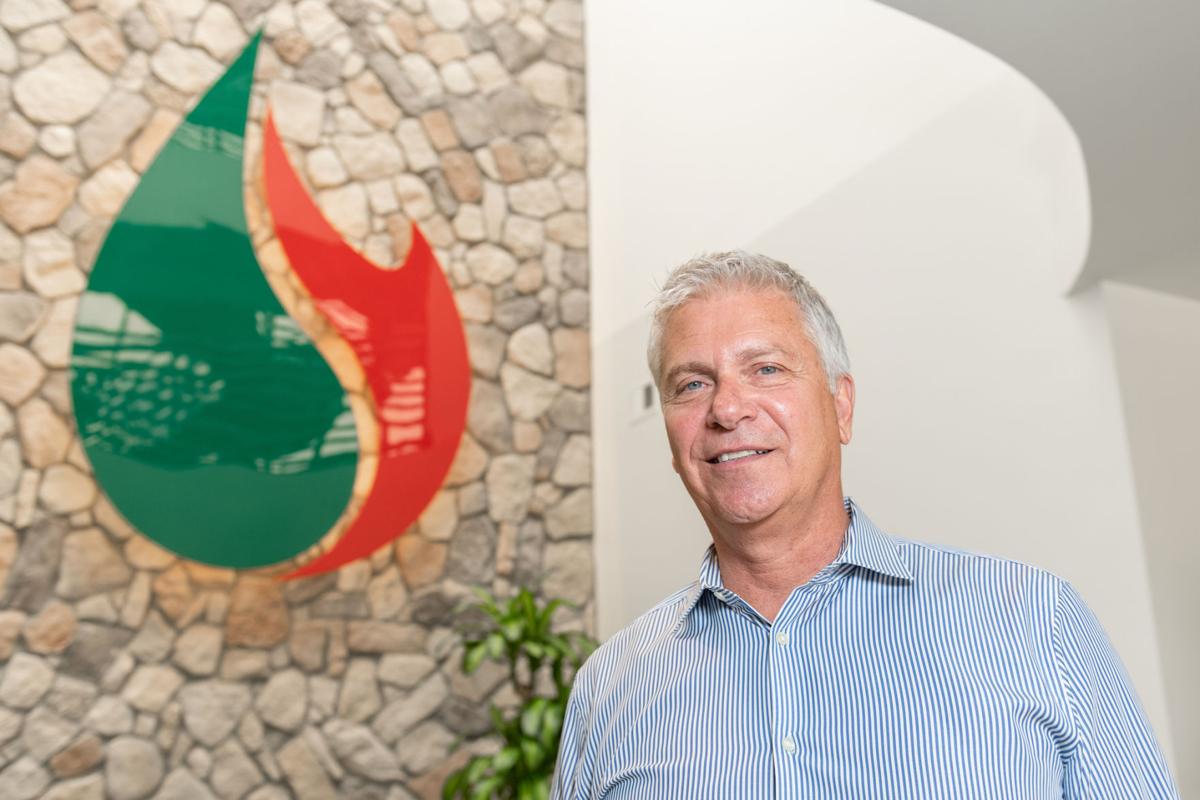 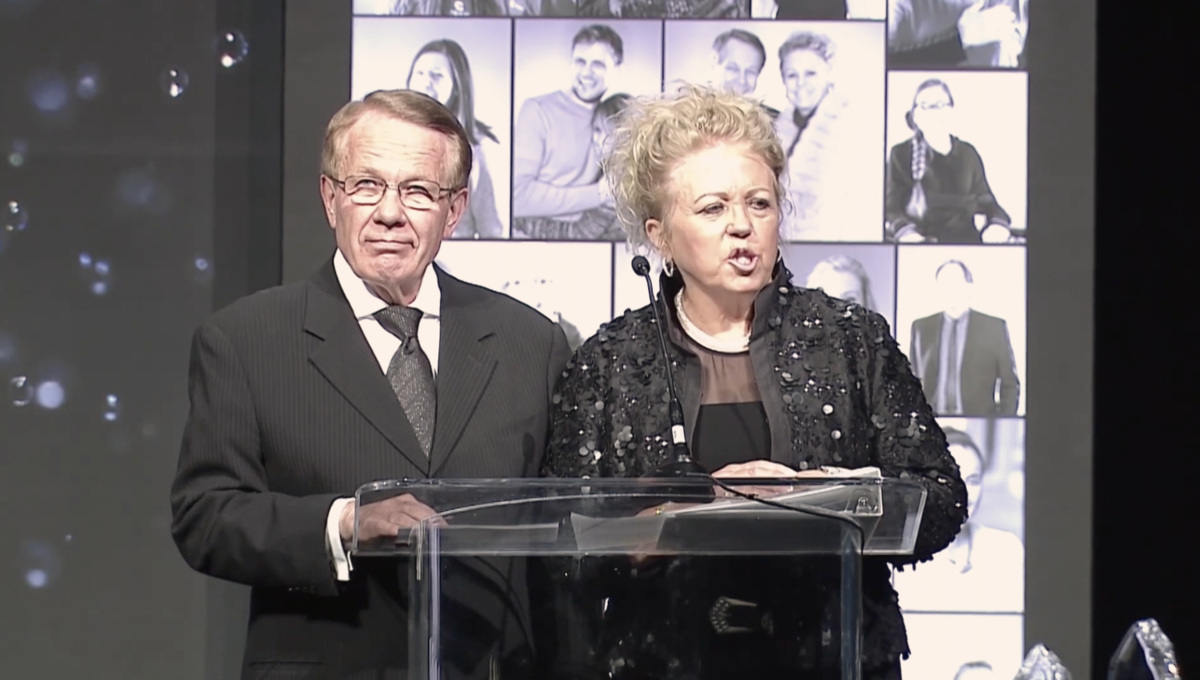 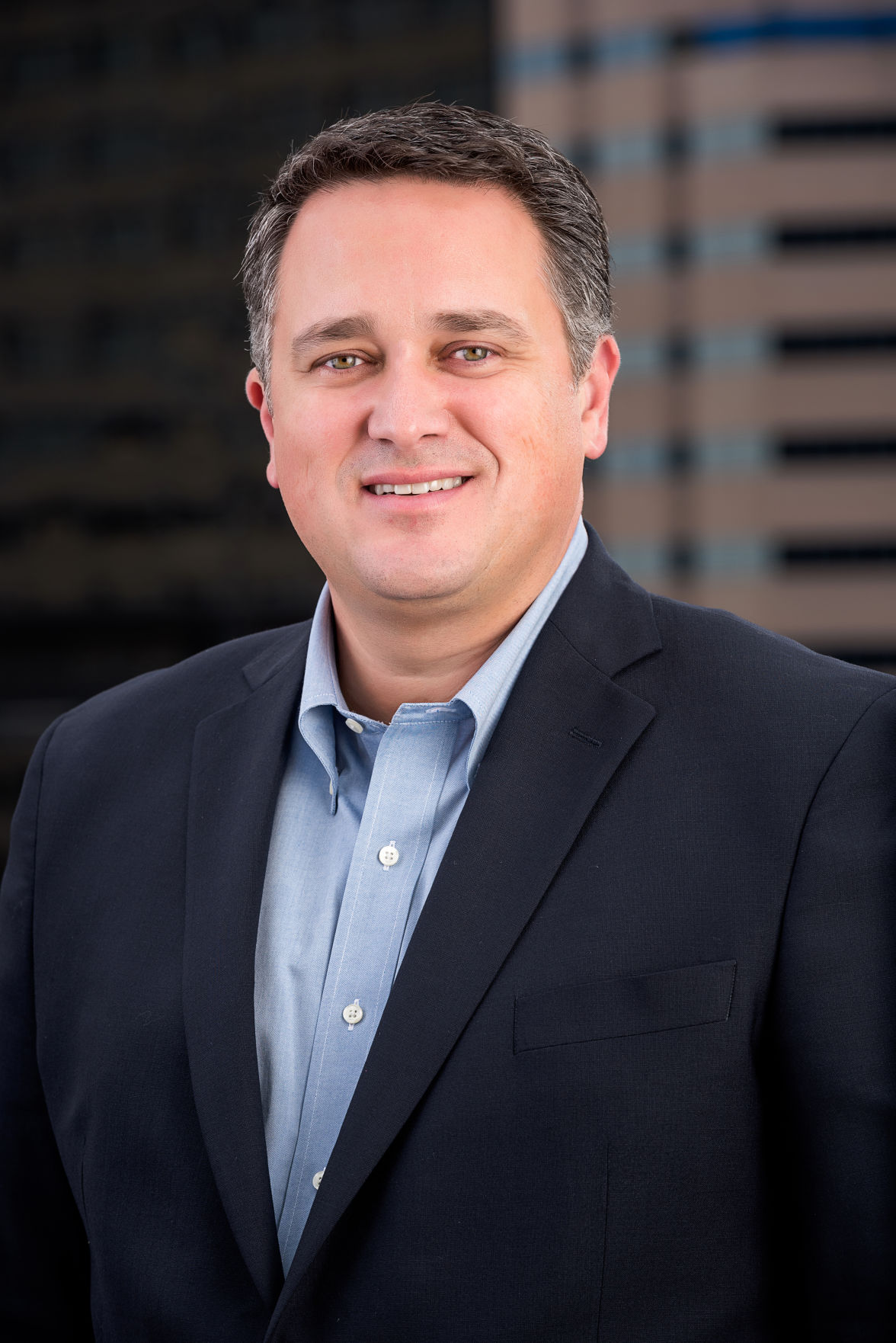 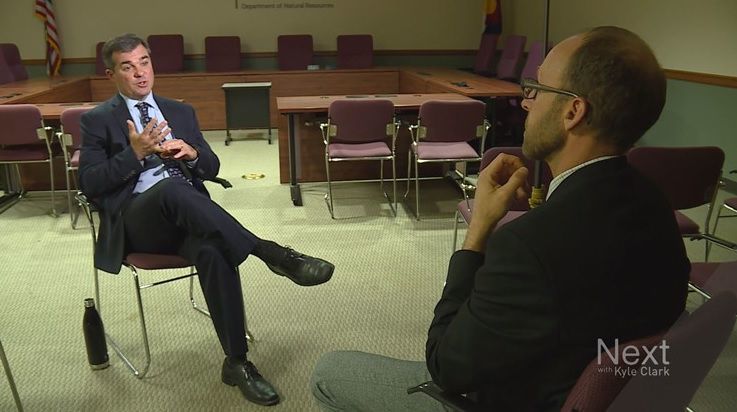 Jeff Robbins, the new director of the Colorado Oil and Gas Conservation Commission, in an interview with Marshall Zelinger of 9News. (KUSA-9News) 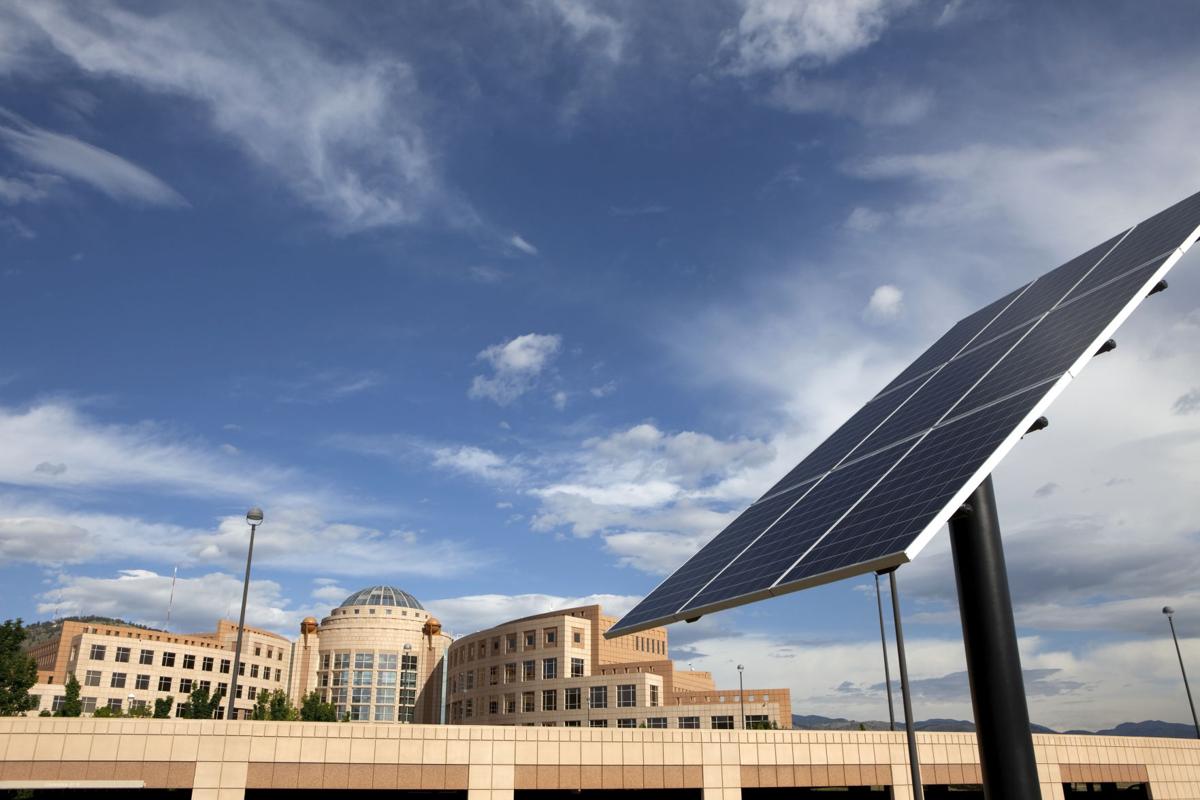 istock Solar panels near the Jefferson County Administration and Courts Facility in Golden. 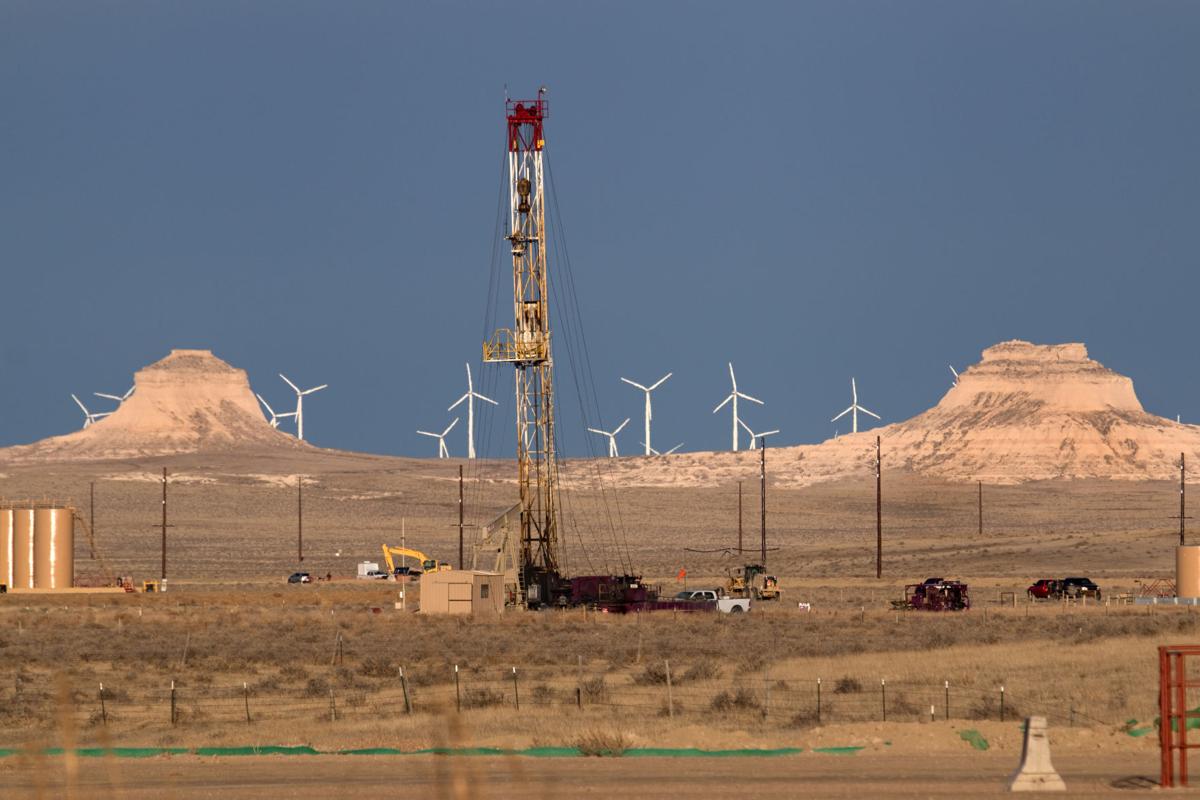 milehightraveler A drilling rig and wind turbines share the landscape at the Pawnee National Grasslands in Weld County. (iStock) 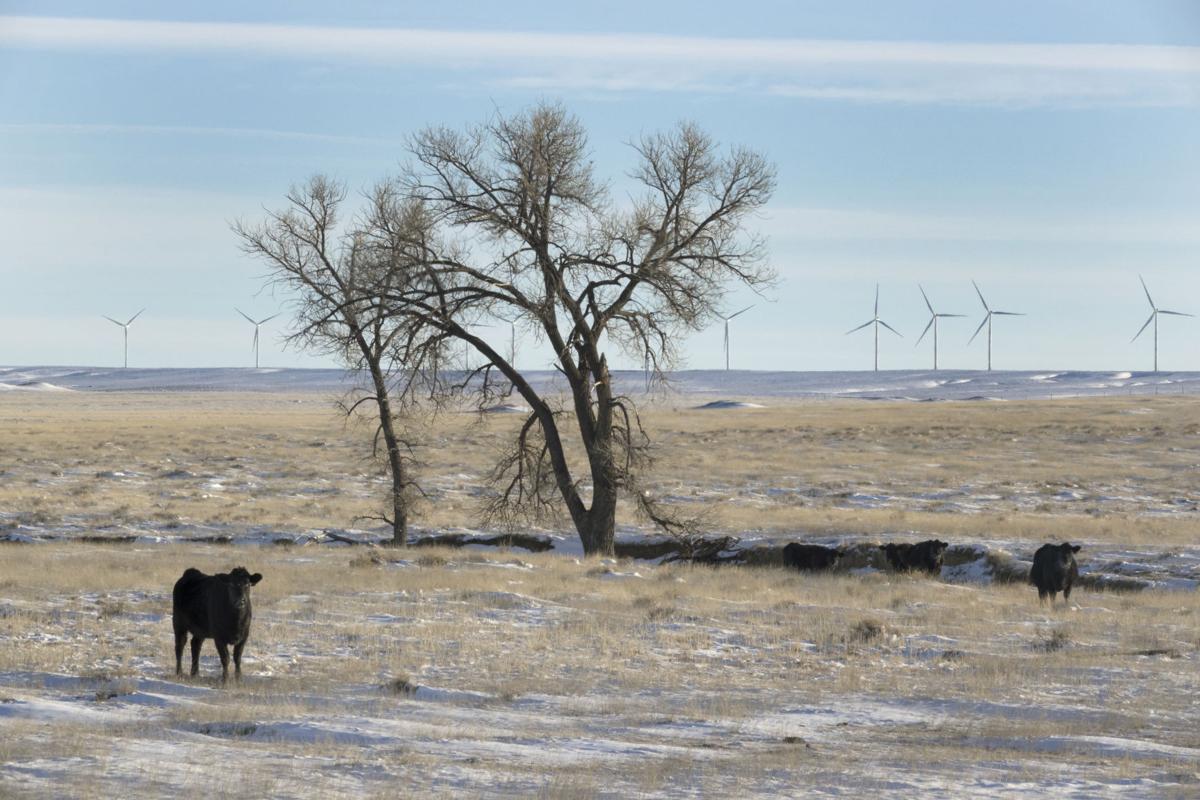 milehightraveler Cattle graze on the snowy prairie east of Eads in Kiowa County, with wind turbines in the background. (iStock)

Rich Frommer, president and CEO of Great Western Oil & Gas Co., in Longmont explains the workings of an oil-and-gas site south of Brighton, on June 27, 2019, in Adams County.

Jeff Robbins, the new director of the Colorado Oil and Gas Conservation Commission, in an interview with Marshall Zelinger of 9News. (KUSA-9News)

istock Solar panels near the Jefferson County Administration and Courts Facility in Golden.

milehightraveler A drilling rig and wind turbines share the landscape at the Pawnee National Grasslands in Weld County. (iStock)

milehightraveler Cattle graze on the snowy prairie east of Eads in Kiowa County, with wind turbines in the background. (iStock)

Charlie McNeil sketched a diagram showing how the technology of drilling for oil and gas is making it safer, cheaper and more productive than ever.

“It’s amazing what they can do now,” said the president and CEO of NexGen Resources, a Greenwood Village-based company with its corporate arms around many aspects of the fossil fuel industry.

Still, McNeil, an alumnus and board member of Colorado School of Mines in Golden, said he couldn’t confidently predict the outlook for coal, crude and natural gas in Colorado, as those running state government seek to accelerate the move toward renewable energy.

From boardrooms to statehouse committee rooms to the governor’s office, no one knows for sure where the energy dollars will rise and fall.

“We’ll find out,” McNeil said, with a worried grin.

Those on both sides of Colorado’s energy divide — rich fossil fuels versus emerging renewables — agree on one major point: It’s too early to tell if the sky is falling as trade-offs get made over cleaning up the atmosphere.

The irony for the state’s fossil fuel industry: At a time when it’s never been better to extract Colorado’s underground riches, the governor and state Legislature are steadily and assuredly making it harder and more expensive.

In April, the Democratic-controlled General Assembly passed Senate Bill 181, a far-reaching oil-and-gas regulation overhaul that puts the industry’s needs on par with environmental protection and the concerns of local government, skirmishes that the industry had consistently won in courts and on the ballot.

When Gov. Jared Polis signed SB 181 into law, he declared the war on oil and gas was over.

Still, the industry won’t fold anytime soon, by even the most pessimistic industry forecast.

The fact is, 90% of Colorado’s oil is pumped in Weld County, and local officials there aren’t likely to impede its progress. Most of the state’s natural gas comes from the Western Slope, where support remains strong, industry leaders say.

In communities where there could be trouble above ground, the industry is poised to support local candidates sympathetic to its cause. And last November’s defeat of Proposition 112, a measure to greatly increase setbacks between oil and gas developments and buildings, showed the industry will spend money and activate its supporters to protect its economics.

That political will is not going away, either, industry leaders told Colorado Politics in a monthlong series of interviews.

And despite the winds of political change in Colorado, the rigs and wells still are churning out product at a gangbusters rate.

A study released in March, paid for by the Colorado Oil and Gas Association, indicated that, as of 2017, fossil fuels, directly and indirectly, supported 89,000 Colorado jobs, including 30,000 people directly employed by the industry and 8,600 working in the supply chain.

It also raised $1 billion in annual taxes and fees and added $13.5 billion to the state’s gross domestic product, said the study by the Global Energy Management Program at the University of Colorado at Denver’s Business School.

With that backlog, they can operate on schedule for several more months, but not indefinitely.

And while backers truthfully stated that Senate Bill 181 didn’t impose any bans on drilling, almost a dozen local communities already have put moratoriums in place, while the state sorts out the rules. Those limits on future drilling will swiftly become a point of contention when the current permits and drilling sites run dry.

A lot is at stake beneath this mountain of uncertainty.

After Colorado voters gave Polis a 10.6-percentage-point win last November while putting Democrats in charge of the state House and Senate, he came into the governor’s office promising to remake the state’s power portfolio — 100% renewable by 2040, he said — as Colorado continues to do its part to combat climate change. In the end, electricity consumers and Colorado’s economy will be better off, Polis says.

The question of how far Democrats and local governments will go, however, keeps oil industry officials up at night.

The question that should keep Polis up at night is how to pay for all his promises if the state starts hemorrhaging oil and gas jobs and tax revenue.

Besides new energy and environmental plans, the governor’s other expensive promises include full-day kindergarten and more government help on health care, tax breaks, and, eventually, transportation.

“A healthy oil and natural gas industry, operating in compliance with robust regulations that protect our environment and promote economic growth, is good for Colorado,” argues Dan Haley, president and CEO of the 280-member Colorado Oil and Gas Association.

“This industry generates $1 billion annually in local and state taxes, which is a significant amount of public revenue,” Haley said. “It goes to water projects, parks, rec centers — things we value in this state.”

He doubted Polis could keep free all-day kindergarten, which the Legislature passed this spring, without the $600 million the industry provides to education in Colorado.

Haley said COGA shared Polis’ concerns about a changing climate, “and we believe industry and cleaner-burning natural gas must be part of any long-term solution.”

Last month, Polis opted out of a multistate pact to move Colorado’s abundant supply of natural gas for export, ultimately selling a cleaner source of energy abroad. His predecessor, Democratic Gov. John Hickenlooper, had been a supporter of the coalition.

“The fact is, global energy demand is growing and will continue to grow, especially as more developing countries get access to the affordable energy that’s needed to improve their quality of life, drinking water — even life expectancy,” Haley said.

In 2014, Polis proposed state ballot measures that would have sharply restricted oil and gas operations — measures he later withdrew. Now there’s a recall effort against the new governor, partly because of his positions on renewables and climate change. He’s viewed on the right as a liberal ideologue.

If he could flip a switch and make fossil fuels vanish from Colorado, would he? Most, at least on the right, assume the green governor would.

“Of course not,” Polis said, raising the pitch of his voice and sounding genuinely surprised by Colorado Politics’ suggestion he would. “I’m for all jobs in Colorado. With Senate Bill 181 we finally provided more regulatory stability around oil and gas activities. (But) it’s an industry that relies on commodity prices, so the biggest driver of how many jobs we have are whatever oil and gas is trading at.”

He returned to that theme in the conversation, arguing that the price of renewable energy is stable and continually getting cheaper, while fossil fuels over the long term are anything but stable and predictable.

Polis said Xcel Energy, which serves much of Colorado, already is a low-cost provider partly because “they are ahead of the curve on low-cost renewable energy. They have a lot less in coal assets and they embraced renewable energy early on.”

His pledge to move the state to 100% renewable power by 2040 excludes oil, because it’s not powering the grid now. Coal and natural gas, however, are still the leading sources.

“Coal is kind of the workhorse, but it’s being phased out. And solar and wind are the growth areas with some hydro,” Polis said.

Regulation won’t be the root cause of the industry’s demise, he assured.

“What makes their business boom or fail, will be the price of oil and gas,” the governor said.

The potential loss of oil field jobs is a frightening proposition for the tens of thousands of Coloradans who depend on those paychecks, as the renewable energy sector ramps up.

As technology gets better and cheaper, and because of economies of scale, distribution and storage, renewable energy will be an increasingly smart business decision, said Jennifer Helfrich, state policy manager of Ceres, a Boston-based sustainable energy advocacy group, and a former utility analyst for San Francisco Public Utilities.

In the bigger scheme of things, climate change is running up a costly tab for Colorado, Helfrich argued. That includes harm to winter sports, the load-bearing pillar of the state’s tourism economy.

Colorado Ski Country USA, the coalition of most of the state’s mountain resorts, has made the fight against climate change not just a fixture of its brand but also a desperate mission to do no less than save the state’s winters.

“There is so much untapped potential in Colorado to reduce energy costs and have cleaner air, so we are supportive of the governor’s policies that move things in this direction.”

‘Devil is in the details’

Rich Frommer is president and CEO of Great Western Oil & Gas Co., which has about 150 Colorado employees in offices in Longmont and Denver. He’s also the chairman of the Colorado Oil and Gas Association.

“The bill is done; the key follow-up is how the (Colorado Oil and Gas Conservation Commission) actually implements it,” Frommer said of Senate Bill 181, this year’s oil-and-gas regulatory revamp.

“We’re seeing quite a bit of slowdown in getting new permits issued,” and the backlog of permits won’t last long, Frommer said.

Great Western expects to drill 130 wells with the company’s two rigs this year. They gave the oil-and-gas commission a priority list of which wells it would like to do next, “or we have to lay our rigs down, and that’s the last thing we want to see happen. That means we lay people off, and nobody gets the benefit of drilling.”

He said Senate Bill 181 was much more amenable to the industry in the final version than in the early drafts.

The industry began a seismic shift about five years ago with vast improvements to horizontal drilling, allowing greater setbacks and increasing production while reducing the industry’s footprint in the field. That replaced the old norm of an oil pump every 40 acres with one site up to three miles away serving numerous wells.

“The technology is really amazing, and most folks haven’t had an exposure to how incredible the advances this technology is creating,” Frommer said. “It’s what’s created, basically, energy independence for our country.”

and his businesses supply all of the coal requirements for Xcel’s Texas power plants, shipping it from Wyoming. NexGen and its affiliates also help companies commercialize alternative fuels and clean coal technology.

A fourth-generation Coloradan, McNeil said he’s transitioning his company away from energy development and more toward its real-estate development, following Colorado’s recent boom in home prices and sales.

“We’ve been going that way for awhile,” McNeil said.

No special session likely for anti-TABOR proposition on Nov. 5 ballot