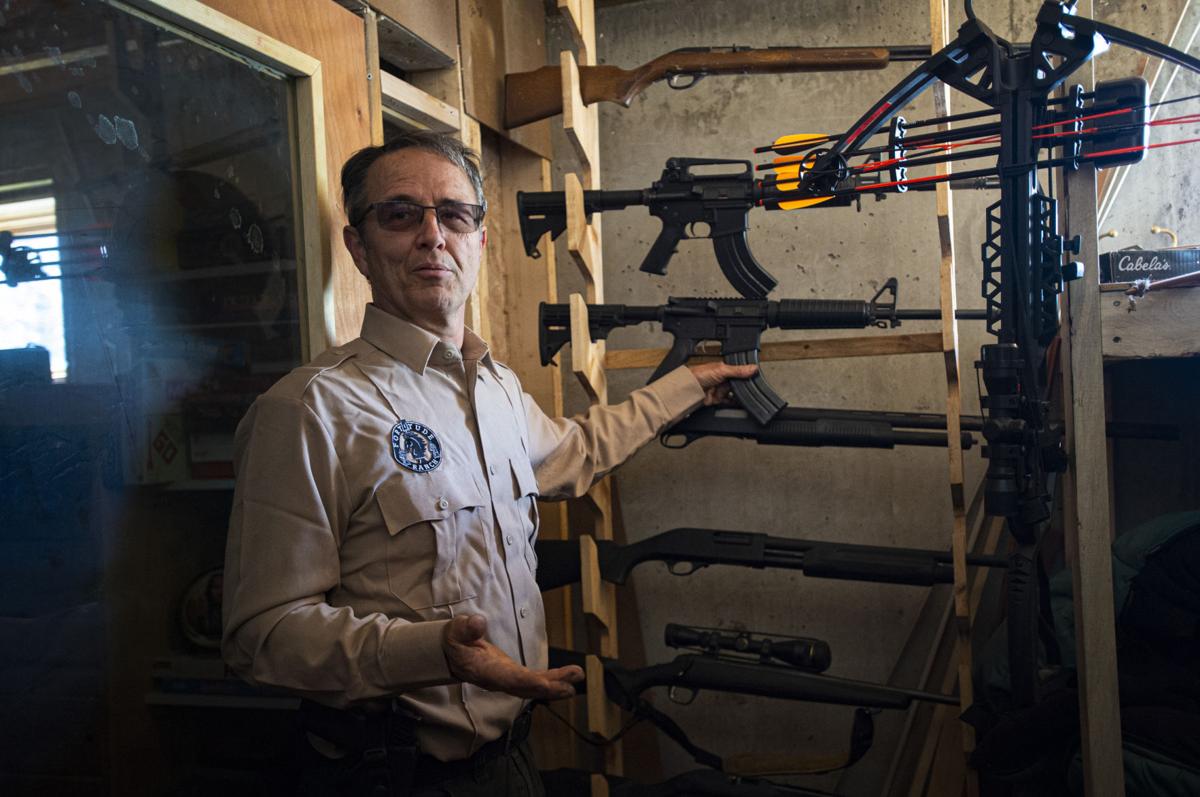 Drew Miller shows some of the Fortitude Ranch’s gun supply including an AR-15 rifle Wednesday, March 18, 2020, at the ranch about two hours from Colorado Springs. (The Gazette, Christian Murdock) 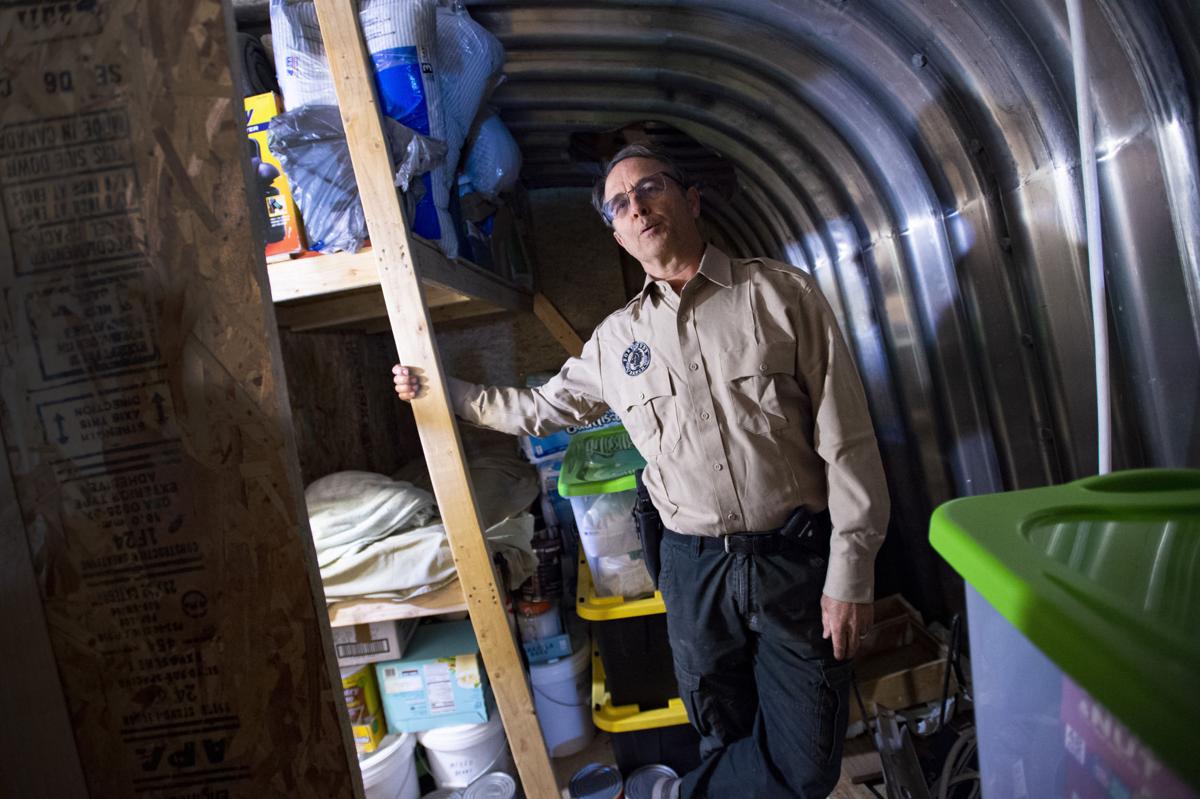 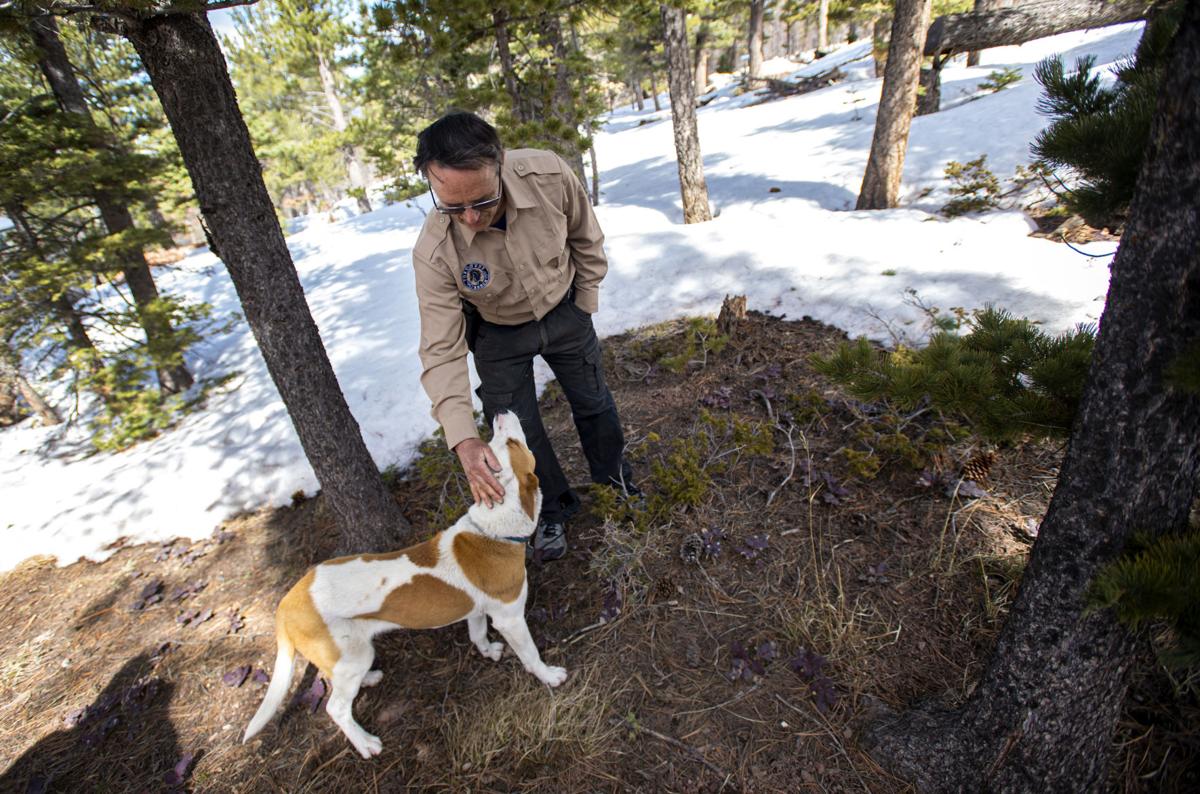 Drew Miller, an 1980 Air Force Academy graduate, pets his dog, Rosie, at the Fortitude Ranch Wednesday, March 18, 2020. About 100 preppers are part of the ranch in Colorado. Other ranches are in Wisconsin and West Virginia. (The Gazette, Christian Murdock)

Drew Miller shows some of the Fortitude Ranch’s gun supply including an AR-15 rifle Wednesday, March 18, 2020, at the ranch about two hours from Colorado Springs. (The Gazette, Christian Murdock)

Drew Miller, an 1980 Air Force Academy graduate, pets his dog, Rosie, at the Fortitude Ranch Wednesday, March 18, 2020. About 100 preppers are part of the ranch in Colorado. Other ranches are in Wisconsin and West Virginia. (The Gazette, Christian Murdock)

No matter what, if you get lost in the woods, or break down on the rugged dirt roads, do not go asking around about Fortitude Ranch, the man behind Fortitude Ranch instructs scheduled visitors. Ask for him, Drew Miller.

After all, he wouldn’t want to tip off neighbors as to his whereabouts in these mountains away from his primary home in Colorado Springs.

Fortitude Ranch is not a secret. You can read about the LLC on fortituderanch.com or any of the other media reports that have popped up lately.

But Miller wants to keep secret the precise location of this militarized base in the Rockies. As he does for the Fortitude Ranch strongholds in West Virginia and Wisconsin, which are similarly disguised as regular old cabins.

Miller also requests that you not mistake him for one of those paranoid doomsday preppers you see on TV. He's level-headed, well-educated, an Air Force Academy graduate of 1980 who went on to get a Ph.D. from Harvard's John. F. Kennedy School of Government.

And, by the way, this prepper is not panicking. Even as America enters another week of national emergency, he's got jokes.

"Careful," he says now, as a reporter is met by his kind-eyed dog, Rosie. "She's a vicious guard dog!"

She's not really. But really, when everything goes to hell, guard dogs will be here. As will armed personnel, stationed at the protected watch posts, including the back deck, with a sweeping view of the valley below so that no intruder can escape detection.

Miller wants to make himself clear: This is not when everything goes to hell. COVID-19, he says, is not the threat that will set us back to the dark ages. "The lethality is too low," he says.

No, this is not when Fortitude Ranch's tribe mobilizes, when members paying about $1,000 a year flee to these survival stations promised to them in a global collapse.

The company has a motto. "Prepare for the worst ... Enjoy the present." And right now, the forts are still operating as vacation getaways. Members are given 10 overnights a year in a business model Miller says reflects that of a country club.

"A country club," reiterates partner David Jones, who manages the West Virginia ranch, "where instead of bringing golf clubs, you bring your AR-15."

At the Colorado shelter, semi-automatic weapons are among the stock of supplies and provisions. There are hand tools and solar batteries. Big cans of food and big bags of seeds for planting. Soap and disinfectant. Fish antibiotics.

And yes, in the underground bunker designed to withstand a nuclear blast, there's plenty of toilet paper. "We didn't have to fight for that," Miller says.

He and well-seasoned preppers have been perplexed by their fellow Americans suddenly flocking to the shelves. The phenomenon underscores a truth these preppers have known all along: That what drives them from their perceived places on the fringes also drives the mainstream populace. It's just taken a certain dose of fear to awaken the prepper within, they say.

"Everybody's a prepper," Jones says. "It just depends on what degree you take it to."

Sure, he takes it to a less common level. The retired Army major's 30-year military career had him training platoons for nuclear, biological and chemical warfare. He's known as the "NBC Guy" over Prepper Broadcasting Network airwaves and at prepper expos around the country.

Just how many preppers are among us?

"How do you pinpoint a portion of the population that first of all doesn't want to be identified, and sometimes doesn't even realize they're preppers themselves?" Jones asks.

"I'll just say about 100 per location," Miller says. "I can be that rough and people won't get mad at me." (Knowledge of exact numbers would surely be a disadvantage to defenses.)

Miller says he doesn’t draw a salary from Fortitude Ranch — he makes a living as a technology consultant. But times have been better than ever for the effort, he says. He’s been answering as many media inquiries as possible and collecting more investments.

Sorry, he's had to tell some callers: The Colorado base can't hold anymore members. But a second location is in the works, he says, with a network of 12 envisioned across the nation.

‘A twinge of vulnerability’

The story takes place in the wake of a biological attack and an electromagnetic pulse that shuts down the grid. But Miller has long said a pandemic is the most imminent threat to civilization. He said so in a Washington Post interview last year before the coronavirus siege in China.

He has said so to Kiki Bandilla for as long as she's known him. The Castle Rock woman runs Denver's Self-Reliance and Simple Life expo, which is scheduled for its 10th installment in October. Miller regularly joins the prepper crowd that typically numbers between 2,000 and 4,000. Bandilla expects that to double this year.

And Miller is one of those to whom Bandilla hesitates asking questions. "Some of these answers from some of these people, I don't want to hear," she says with a laugh.

Not so, she says. The intelligence. The gear. The talk of foraging, of building bunkers, of living like homesteaders. Living simply. It all stirred something in her.

"For a while, I've fundamentally believed that we have become so dependent on our modern luxuries, our technologies, our entitlement, if you will, that we expect the gas station will be open when we need it open, or the lights will come on when we need them to," she says. "For me, there's always been a twinge of vulnerability."

So yes, she and Miller connected.

Where Bandilla is open about her prepper origins — about her ever-lingering sense of insecurity — Miller is mostly closed.

His Civil Air Patrol time seems a logical starting point. He volunteered as a 13-year-old during the Cold War.

The idea of Fortitude Ranch, he says, came with the realization that a like-minded colony would be needed in the event of a total disaster. His efforts alone to protect his family would not be enough, he decided.

Yes, he's a family man. And that's all he says about that. He'll keep those details to himself. Though, the dedication in his book is curious. "To Annabeth and Annaclarice, in hopes the preparations made for your survival will succeed ..."

The moment may come, but COVID-19 is merely "a wake-up call," he says. Good could come from this, says Bandilla, who the other day went for a walk and smiled at the sight of loved ones picnicking.

Miller smirks at the sentimentality. "I don't think I'll go there."

But there's hope on the last page of his book. The characters survive the 2020 apocalypse. They have a future.

"From this day on," Miller writes, "whatever conflicts and travails assaulted the recovering nation, they would be inseparably one ..."

In mountains outside Cripple Creek, learning the ways of wilderness survival

Teller County - Jason Marsteiner feels he must express his normalcy. "I'm a family man, four kids, a wife," the Colorado Springs resident says in his home away from home, at a camp in the wilderness outside Cripple Creek. He is soft-spoken, thinly-bearded and sniffling due to a mild allergy to the surrounding pines. He wears a black polo over a long-sleeve shirt and cargo pants. Like most of the nine men and women here - who he is teaching how to survive primitively - he has a knife buckled to his hip. Some have pistols. "I'm just like everybody else, I think," Marsteiner, 41, continues. "I just happen to have a set of skills that I think we've kind of gotten away from.