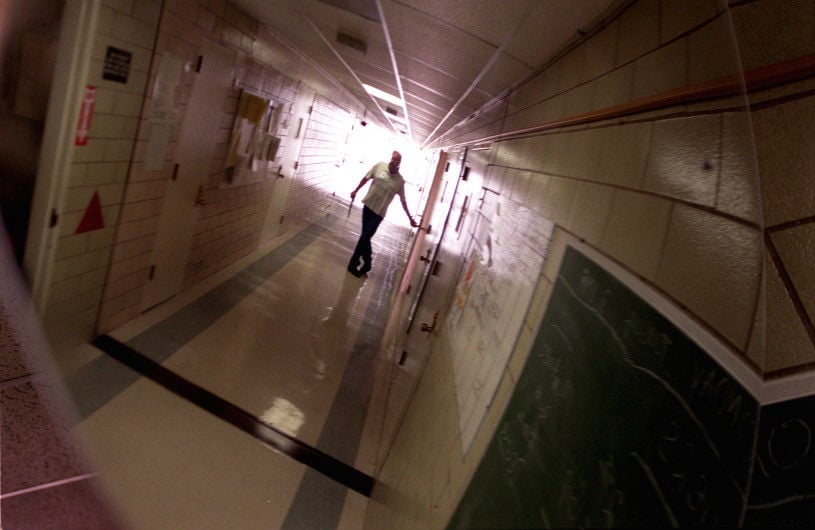 A guard is reflected in a security mirror in the hallway at the Colorado Mental Health Institute at Pueblo.

The coronavirus pandemic has delivered the latest blow to Colorado’s troubled care system for mentally ill people accused of crimes, putting the state on course for millions in new fines while a growing number of defendants languish in jails awaiting services.

The number of the most severely ill pretrial detainees on a wait list for competency restoration roughly doubled in mid-April, and wait times likewise spiked, Colorado Department of Human Services figures show.

The delays are poised to put the department in continued violation of a federally enforced civil agreement carrying steep penalties — up to $10 million per year.

“It’s going to have a significant impact on fines for the state,” said Robert Werthwein, director of the Colorado Office of Behavioral Health, acknowledging what he called “setbacks” in the state’s ability to meet court-ordered performance goals.

With 252 cases, Sterling Correctional Facility is the site of state's largest coronavirus outbreak

Werthwein didn’t provide an estimate of fines the state is likely to pay this year, but said they will exceed the previously projected $2.5 million.

The state Department of Human Services agreed in March 2019 to overhaul its evaluation and treatment of mentally ill criminal defendants under a watershed agreement with Disability Law Colorado, which sued in 2011 in federal court over years of widespread delays that kept mentally ill people behind bars waiting for services.

In its 2011 complaint, the plaintiffs said that scores of criminal defendants were held for up to six months in county jails before receiving court-ordered mental competency evaluations or treatment — later branding it a “human crisis.”

The agreement called for tightening certain deadlines and shifting care for many criminal defendants from state psychiatric hospitals to community-based programs, among other changes.

The maximum annual fine of $10 million is meant keep the state on task after it violated two previous settlements by making “promises” that never panned out, plaintiffs say.

In hashing out the consent decree, both sides agreed the state was likely to reach the maximum fine during the agreement’s first year, while the department planned and implemented changes.

The state hit the maximum in February, after roughly the first nine months. New fines begin accruing again in June.

State administrators were initially confident they could hold down fines to $2.5 million during the agreement’s second year, citing progress, including shrinking the wait list for competency evaluations, Werthwein said.

But delays associated with the coronavirus pandemic have thrown those projections into question, “derailing” the state’s ability to meet some court-ordered deadlines, particularly for inpatient restoration, he said.

“We were trending in the right direction, is how I would put it,” Werthwein said. “Unfortunately, since COVID-19, the wait list went up.”

In January, the state admitted approximately 100 patients for restoration treatment at the Colorado Mental Health Institute at Pueblo. By the end of April, that number had declined to 50 to 60, according to Werthwein. Meanwhile, the number of severely ill people on a wait list for restoration climbed into the 30s by mid-April, roughly doubling in a month, according to figures provided by his office.

Some of the delays arose from health precautions at the Pueblo complex. To reduce the risk of spreading COVID-19, the state began admitting defendants in “cohorts” and requiring that they be monitored in isolation for symptoms of the virus for 14 days before restoration treatment can begin.

“If we don’t do this well, we can run the risk of infecting 500 patients with COVID,” Werthwein said.

When questions arise about a defendant’s mental fitness, that person must first be evaluated for competency by state mental health experts, who determine if the defendants understand the charges against them and can intelligently assist in their defense.

If a judge deems defendants incompetent based on the state evaluations, the charges against them are frozen and they are generally sent to the state hospital for restoration, which involves a mix of mental health treatment and education.

Defendants on the wait-list for restoration services often remain behind bars, in some cases leading to weeks of extra confinement, often without suitable mental health services.

Along with the risk of further unraveling in custody, those inmates are now in jeopardy of contracting a deadly disease while confined in close quarters with other inmates, advocates say.

“Most people sitting at home are very scared of this deadly virus. But to be sitting in (jails) where you have no control over your surroundings is a whole different level,” said Alison Butler, legal director of Disability Law Colorado. “It’s utterly terrifying.”

Deadlines under the consent decree are monitored by a court-appointed special master, who prepares quarterly reports.

In the most recent report, issued in March before the pandemic hit, authors Neil Gowensmith and Daniel Murrie credited the Department of Human Services with making “meaningful progress” toward compliance.

The special master’s report found the state hospital system had reduced the wait-list for restoration services for so-called Tier 1 defendants — those with the most acute illness — and consistently met a seven-day deadline for getting them admitted once they were found incompetent.

But gains made in admitting those with the most urgent medical needs came at the expense of Tier 2 defendants, who have less urgent needs. Their average wait times grew to 97 days, well beyond the required 49 to 56 days, the report said.

The state’s performance on another requirement — providing community-based evaluations — had “deteriorate(d) substantially,” the report said.

Disability Law Colorado remained dissatisfied with the state’s progress under the consent decree even before the pandemic, said Butler, disputing Werthwein’s contention that the state had gained “significant” ground.

“They weren’t complying anyway with either restoration or evaluations, and now because of COVID, it’s even gotten worse,” she said.

Butler said the plaintiffs want to see more people treated in the community rather than sitting in jails or at the state hospital.

Fine money collected from the state is reserved for mental health services not already required by the state.

A fines committee made up of the plaintiffs, the DHS Office of Behavioral Health and the special masters decide how it should be spent.

The committee has so far disbursed $3.5 million to Colorado Coalition for the Homeless to house people who are in restoration process, with the goal of keeping them out of custody.

Another plan under discussion by the committee is to hire someone to visit every county jail in Colorado and perform a survey of mental health services they are providing, Butler said.

“(Defendants) are going to wait before their evaluation, and once they’ve been found incompetent they’re going to wait for restoration,” she said. “So what services are those folks receiving, mental health-wise, so that they don’t decompensate?”

Because of past violations by the state, the consent decree bars the Department of Human Services from invoking “special circumstances,” such as the pandemic, as an excuse for not meeting deadlines.

But the plaintiffs say they are willing to revisit the fine structure in recognition that “there are some things out of (the state’s) control” because of the pandemic, Butler said. She offered no guarantees that fines will be taken off the table.

“We don’t want to take the pressure off and say all is forgiven,” she said. “The pressure needs to remain but we need to acknowledge that this is a different situation.”

One new coronavirus death and six new infections were reported in El Paso County on Sunday as the number of infections statewide grew by 410.