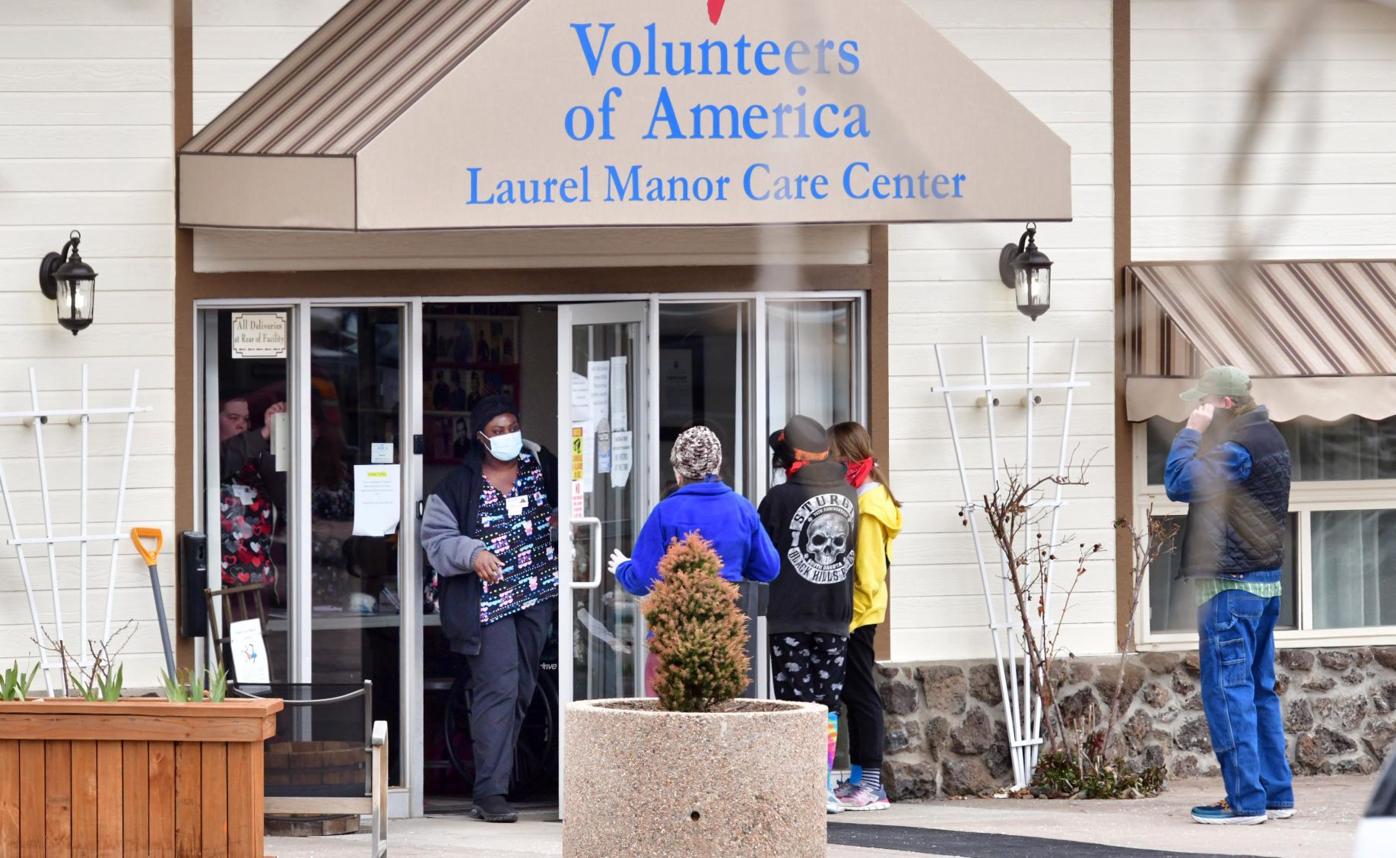 At Laurel Manor Care Center, a group of visitors talk to a worker who comes to the front door in the building in April. 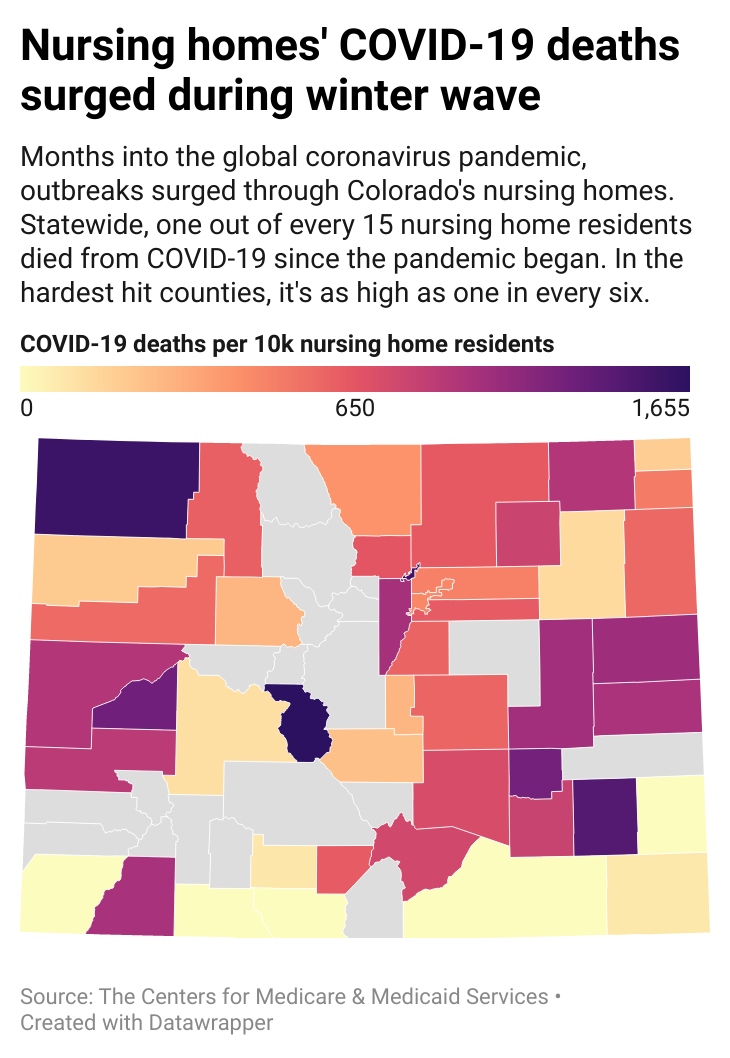 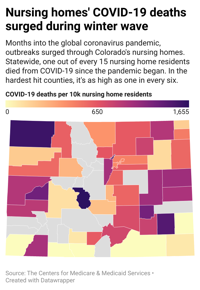 At Laurel Manor Care Center, a group of visitors talk to a worker who comes to the front door in the building in April.

Gov. Jared Polis a year ago pledged an aggressive approach to tamp down surging coronavirus cases in the state’s nursing homes, calling on the Colorado National Guard to help with testing for the virus at the most troubled facilities.

Even as their residents succumbed to the coronavirus, nursing homes in Colorado hit with out…

He also ordered all nursing homes to develop COVID-19 screening protocols for visitors and put in place long-term isolation plans in the event of a positive case.

“We need to really up our game in practice in all of the senior care facilities across our state,” Polis said during a news conference at the time.

As nursing home deaths started peaking in Colorado in November and December, state health officials started supplying nursing homes in the state COVID-19 testing from a fledgling company new to virus surveillance that was run by a 25-year-old who dropped out of the University of Oxford to pursue his entrepreneurial dreams. The start-up company previously had worked at producing anti-doping testing and the testing and certification of vitamins and food supplements, according to one federal lawsuit from a former business partner.

The switch to a new testing firm added an element of confusion because of flawed coronavirus test results and put nursing home residents in harm’s way, according to one facility administrator. In January, the U.S. Food and Drug Administration cautioned that COVID-19 tests by the firm, Curative Labs, based in San Dimas, Calif., might inform patients they were free of the virus, even when they weren’t – a so-called false negative that could end up with infected people unwittingly spreading the virus based on a false sense of security.

Curative Labs' COVID-19 testing also identified nursing home residents as carrying the virus when they really weren’t, said Yvonne Myers, the health services administrator for Fort Collins-based Columbine Health Systems, which operates five nursing homes and three assisted living centers. Those faulty tests forced one of her facilities to relocate 30 residents in January when they shouldn’t have been moved, she said. Follow-up testing at a Colorado State University lab determined the Curative tests found virus infections in 16 of the nursing home staffers when only one of them was actually carrying the virus, Myers said.

“It was scary,” Myers said. “We were putting someone we thought as sick in a wing with sick people. We moved them, and now the potential is to give them COVID when they actually didn’t have it.”

For the second consecutive week, the number of outbreaks in Colorado have increased, continuing a reversal after weeks of improvement.

“At that time that we were seeing that incredible spike in cases, we were doing all that we could at the state government and local level so that we could get the public to understand the importance of adhering to public health guidance and recommendations to make sure we knocked this wave down as quickly as possible,” Scott Bookman, incident commander for the state health department's pandemic response, said in a March news conference.

Curative Labs tests were used in more than 1,000 congregate facilities -- where a number of people live or gather in close proximity -- in Colorado, averaging 70,000 tests per week during its contract with the state, which started in November. Curative conducted more than 715,000 coronavirus tests in the state.

"While Curative is disappointed with the Colorado Department of Public Health and Environment's decision to no longer use Curative for testing across Colorado and at long term care facilities, we continue to be confident in our data, our test and in the service we continue to provide to patients across the country every day," said Gianni Pasquale, the company spokesperson, in a prepared statement. "Curative's test performance and labeling have not changed, nor has the company observed any changes in test performance."

Rachel Herlihy, the state health department's top epidemiologist, said during the March news conference that the state reviewed data in all nursing homes after severing the relationship with Curative Labs and found no statistical difference in death rates or coronavirus cases in nursing homes that used Curative Labs tests compared to facilities that used testing by other companies.

"Other nursing homes in the state were all saying there are a lot of positive test results," Myers said. "There were a lot more positive results than what we were getting before." She recalled that state officials batted down the concerns, saying, "We have really good testing now. We're catching more cases now."

She said she wanted to go back to a previous testing lab her company had been using previously, but state officials said that lab could not be used because it could not meet the state's capacity requirements.

"You have to trust that data," Myers said. "You can't see COVID always. The symptoms don't come right away. It's vitally important. It's not like getting a rash and everyone can see it."

Herlihy said the state also has reviewed death rates nationally compared to what occurred in Colorado and found that in the earlier months of the pandemic, Colorado had death rates below the national average.

“There is much variability in the other state’s peaks and valleys,” Herlihy said, stressing that a health department analysis of coronavirus outbreaks in nursing homes in Colorado found that those outbreaks seemed to correspond with outbreak spikes in the general community where those nursing homes are located.

Bookman noted the state has taken other steps to assist nursing homes, freeing up more than $20 million to assist the facilities with infection issues and high turnover in staffing. The state also revised how nursing homes are inspected to emphasize infection control protocols, he said.

Still, inspection reports of nursing homes in Colorado hit hard by coronavirus deaths during the fall surge detail instances where the facilities still weren’t following basic infection control protocols that could have helped contain the spread of the virus.

The review of federal data shows Mesa County became one of the top counties in the state where nursing home residents died from coronavirus in the fall.

The virus hit four Mesa County nursing homes – Mesa Manor Center, Larchwood Inns, La Villa Grande Care Center, Palisades Living Center – with the facilities reporting outbreaks to the state between Oct. 20 to Nov. 30. A total of 57 residents died from the virus, with most of them, 21 residents,  at Mesa Manor in Grand Junction.

Inspectors in December found that Mesa Manor staff weren’t wearing personal protective equipment properly or practicing appropriate hand hygiene. They failed to wash the hands of residents before meals, according to the inspection report.

A certified nurse aide failed to remove her personal protective equipment after exiting the room of a resident who had died, the report noted. At the time, the facility had 22 residents who had tested positive for the virus.

At La Villa Grande Care Center in Grand Junction, an inspection revealed several residents were walking or sitting in common areas unmasked or with masks worn below their noses. Staff failed to instruct the residents to don masks or to wear them properly, according to the inspection. In addition, the inspector noted that screening protocols weren’t followed rigorously. In one instance, a visitor answered questions on a form to determine if the visitor was at risk of spreading the virus, but the screener never read any of the answers, according to the report.

Within weeks after the inspection, coronavirus cases began popping up at La Villa Grande Care Center and within days 17 residents had tested positive. In all, 12 residents there would eventually die of the virus, according to state outbreak data.

An article that ran in The Gazette on Wednesday incorrectly reported that the state mandated that nursing homes use Curative Labs tests for coronavirus testing. The state provided Curative Labs coronavirus testing to nursing homes for surveillance and outbreak testing, but nursing homes could choose or procure another testing resource if that resource met or improved upon testing timeframes for the testing services provided by CDPHE. In the instance cited in the article, a Fort Collins-based company that runs five nursing homes and three assisted living centers had relied on a testing lab that did not meet the state’s testing capacity requirements. State officials said the company could not continue using that lab.

Democratic Gov. Jared Polis on Tuesday indicated he would veto a bill backed by Democrats in the General Assembly seeking to beef up Colorado’s greenhouse gas reduction plan with enforceable regulations, the latest in a series of terse encounters between Polis’ administration and lawmakers on climate action.