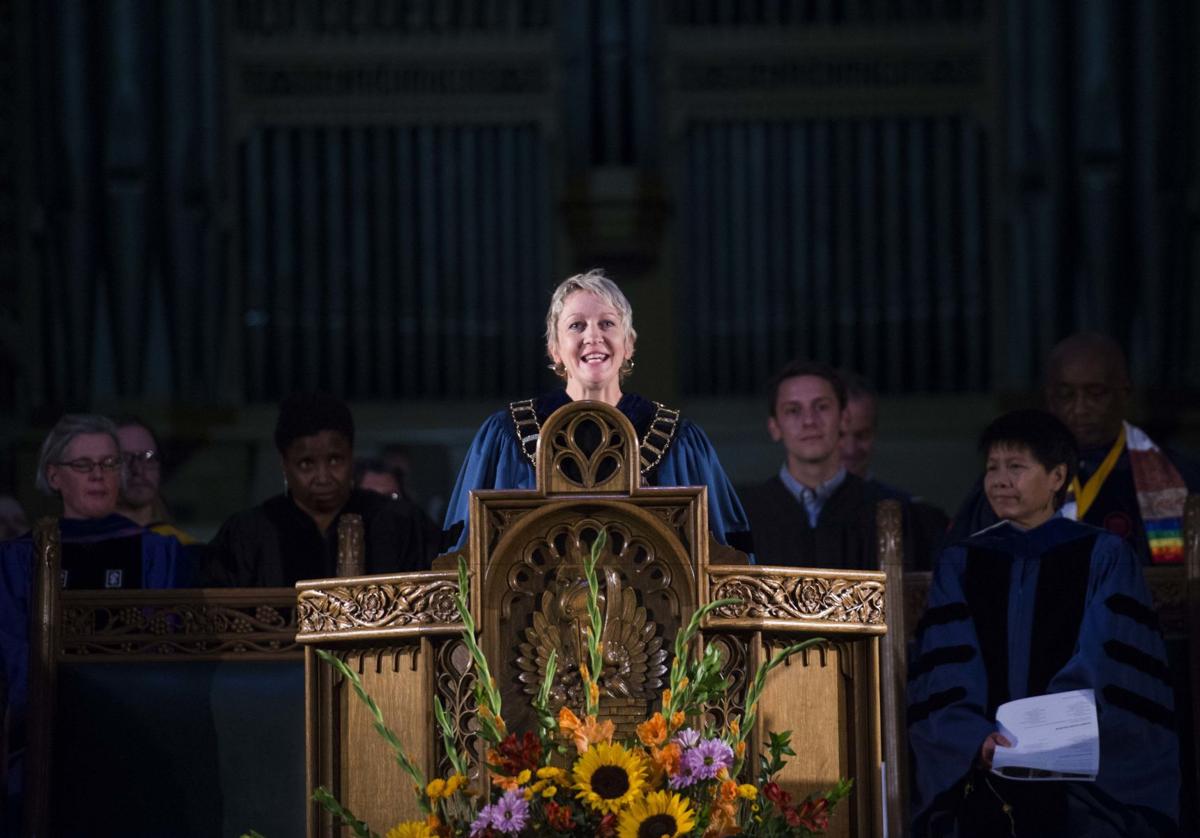 Jill Tiefenthaler, the president of the Colorado College, speaks in 2018 during Colorado College’s opening convocation for the class of 2022 in Shove Memorial Chapel on campus. The college’s 145th academic year began Monday. 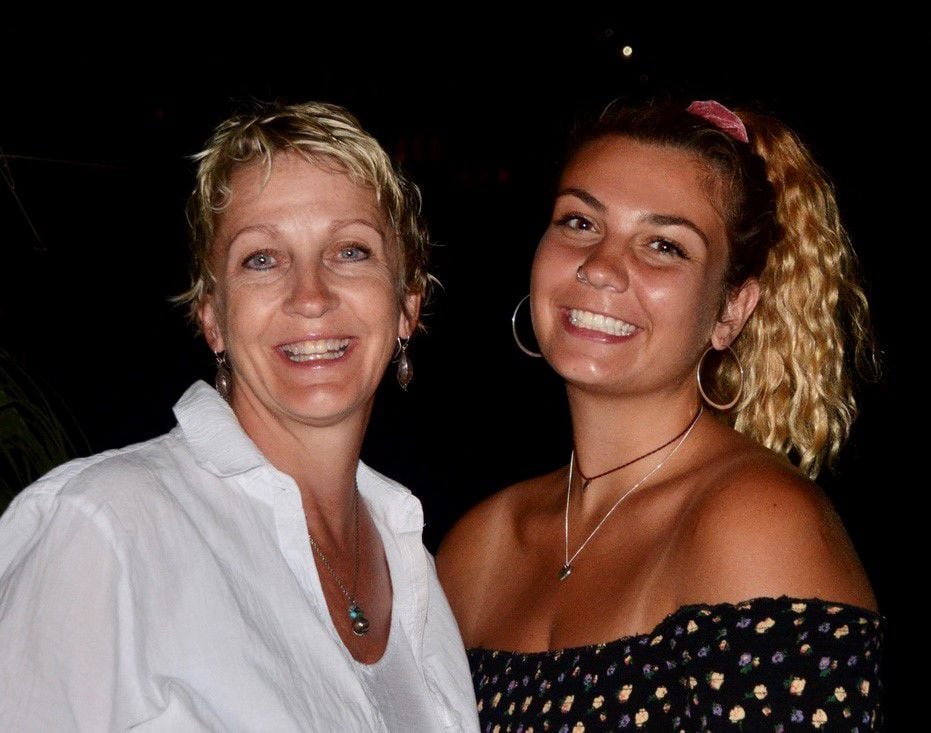 Colorado College President Jill Tiefenthaler, left, and her daughter, Olivia Rask, who will be a senior at Colorado College in the fall. “I didn’t want to go to CC originally because of the fact my mom’s the president and my dad’s a professor. It’s a little too close to home. I applied to 12 schools, and in the end picked CC because I liked it best.” (Photo courtesy of Olivia Rask) 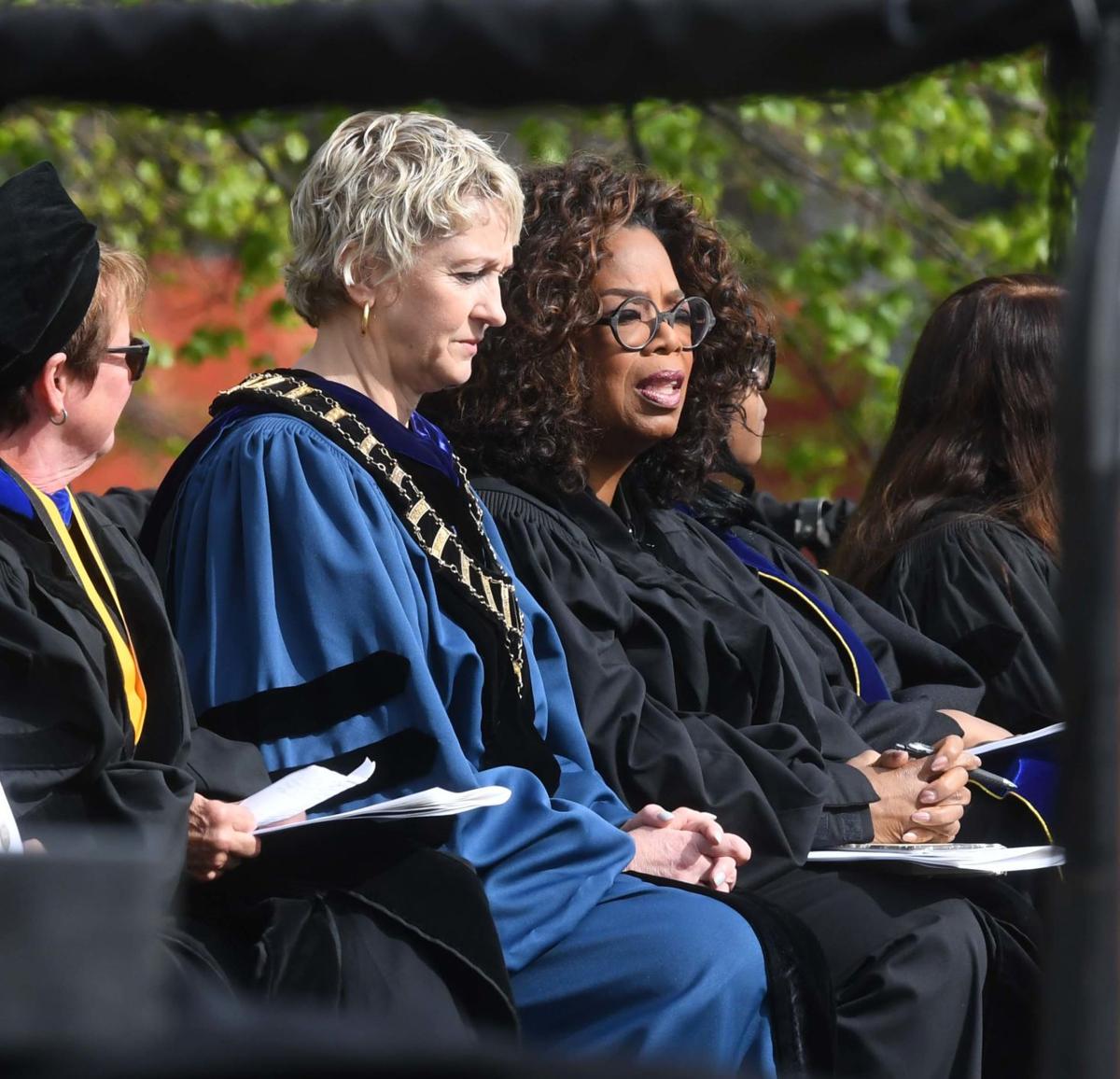 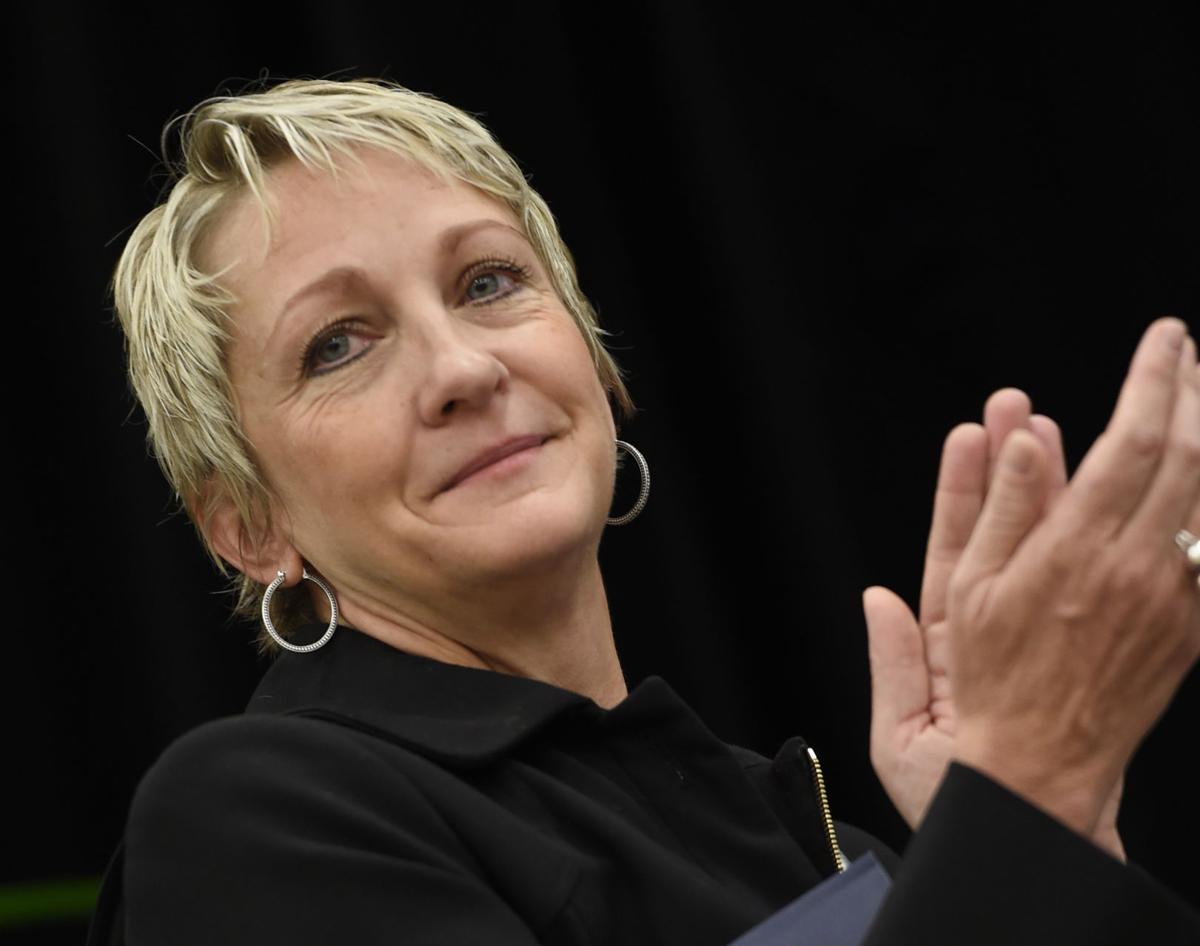 Jill Tiefenthaler, the president of the Colorado College, speaks in 2018 during Colorado College’s opening convocation for the class of 2022 in Shove Memorial Chapel on campus. The college’s 145th academic year began Monday.

Colorado College President Jill Tiefenthaler, left, and her daughter, Olivia Rask, who will be a senior at Colorado College in the fall. “I didn’t want to go to CC originally because of the fact my mom’s the president and my dad’s a professor. It’s a little too close to home. I applied to 12 schools, and in the end picked CC because I liked it best.” (Photo courtesy of Olivia Rask)

Even as a pre-teen, Olivia Rask knew she had a “bad-ass mom.”

“Holy crap,” was Rask’s first thought when nine years ago her mom, Jill Tiefenthaler, beat out hundreds of candidates and was hired as president of Colorado College.

“It was like what can she do next,” Rask said.

Tiefenthaler will head to Washington, D.C. after walking out of her Colorado College office for the last time on July 31 to become the first female chief executive officer of the National Geographic Society.

“She keeps blowing it out of the park,” Rask said, only half joking when she postulates that president of the United States isn’t a long shot for her uber-achieving mother.

“What mom could I have for a better role model,” Rask, 21, said. “She’s raised me to be a strong person and taught me to work hard. She’s always been so driven and wants people around her to succeed in the same way.”

Tiefenthaler’s decision to steer her professional life in a new direction was not so much about leaving her post at Colorado College — which in 2017 compensated her with a salary, bonus and benefits totaling $640,000, according to the Chronicle of Higher Education — as it was grabbing an opportunity.

When a headhunter came calling about the National Geographic job, “It was too good to pass up.”

That being said, it’s not easy for Tiefenthaler to move away from Colorado Springs on her way up the corporate ladder.

“She was really hesitant,” Rask said. “She’s having a hard time. But she’s really excited. She deserves everything she’s getting — she’s worked so hard for so long.”

Tiefenthaler will miss looking at Pikes Peak every day from the private, liberal arts campus north of downtown and the nearby president’s residence that has been her family’s home since 2011.

She’ll miss the tight-knit community that exists both inside and outside the college boundaries. And she’ll long for the moderate climate and plentiful outdoor diversions of Colorado

Colorado College Class of 2020's commencement will be held next year

But what Tiefenthaler says she will most yearn for is the students.

“The joy in a career in higher education has been to be around young people all the time who are constantly pushing you and keeping you up on where the future is headed and creating energy and excitement,” Tiefenthaler said.

Throwing an impromptu dinner party for Rask, who will be a senior at Colorado College in the fall, and her friends, sitting around the table, debating and possibly solving the most-pressing issues of the day has been one of Tiefenthaler’s favorite activities in recent years.

“It’s been so much fun to have a group of young people I know, not as president, but as Olivia’s mom,” Tiefenthaler said.

Rask’s brother, Owen, also will become a Colorado College student, entering as a freshman in the fall. That will round out the entire family having close ties to the school. Tiefenthaler’s husband, Kevin Rask, has been an economics professor there, and he and Tiefenthaler have co-taught a course on the economics of higher education, her area of specialty.

“My one regret in leaving is that I won’t be here for Olivia’s senior year and Owen’s freshman year,” Tiefenthaler said.

“I love the impact higher education has; it does transform lives and make a difference.”

So Tiefenthaler decided to make individual videos for all 600 graduates, which were mailed to them last month along with a cap, tassel and other mementoes.

“It was quite a job,” she said. “I put on my regalia for all of them, so it would look like the formal ceremony. I did some in the evenings and between calls. I could do 25 an hour.”

Leading the college during the pandemic was the hardest part of her leadership role and much like “driving in a heavy fog,” Tiefenthaler said.

“You need to make decisions and steer things in a direction, but you didn’t have clarity getting input from typical constituencies.”

As she exits a 29-year career in higher education, Tiefenthaler leaves a mark on Colorado College.

Among a spate of campus construction projects, including new housing, a contemporary performing arts center, and numerous building renovations, the crowning achievement stands as the major overhaul of Tutt Library.

The $45 million expansion and renovation was completed in 2017, with the 100,000-square-foot building being powered by natural gas instead of an electrical system and heated by a geothermal field.

“It’s a great project, not only for the campus and community use, but it’s the largest net-zero library (in the nation),” Tiefenthaler said. “That’s one of the steps that helped us achieve carbon neutrality.”

The campus announced in January that it had attained a decade-long goal of becoming carbon-neutral by eliminating greenhouse gas emissions from certain campus operations and using renewable energy sources.

Tiefenthaler also is proud of the large-scale initiative the campus launched to foster diversity and fight racism, which included renaming the central gathering space as Tava Quad during a tribal ceremony and celebration in October 2019. The Ute word means “sun” and was how early Ute settlers identified the mountain now known as Pikes Peak.

“It was a wonderful acknowledgement of the land we sit on,” Tiefenthaler said.

Signing a deal in 2016 to acquire the building, art collection and debt of the struggling Colorado Springs Fine Arts Center allowed Colorado College to expand course offerings and programs.

“I think it’ll have a long-lasting impact on the community,” Tiefenthaler said.

Another accomplishment: A major fundraising campaign that started in 2017 is closing in on its goal of $435 million, Tiefenthaler said. The money will fund scholarships for students, an innovation program and the building projects. It goes down as the most ambitious fundraising initiative the college has undertaken in its 146-year history and was among the 15 largest fundraising campaigns launched by a liberal arts college nationwide.

The projects came about after Tiefenthaler instituted a strategic plan, after spending a year listening to what people wanted.

Her go-get-‘em attitude earned the respect of colleagues.

“Many leaders have big ideas but they do not engage others in making them a reality,” said Pam Shockley-Zalabak, chancellor emeritus of the University of Colorado at Colorado Springs. “Jill brings that art of creating and implementing together in a way that is rare.”

Tiefenthaler was pivotal in forming a partnership in 2014 with leaders of Colorado Springs’ four major higher education institutions, UCCS, CC, the U.S. Air Force Academy and Pikes Peak Community College, called the Quad Innovation Partnership. The group facilitates interdisciplinary teams of students and faculty from the schools to advance projects for area companies and organizations.

“Jill not only thinks innovatively and creatively, she acts that way,” Shockley-Zalabak said. “Jill understands tough problems and is willing to face them.”

Tiefenthaler will be familiar with her duties at the National Geographic Society, which is also a nonprofit but is global in scope. As CEO, she will study the operations, work on a strategic plan, raise funds, build partnerships and improve on a sustainable business model.

“When you’re sitting at the president of Colorado College, your job is to the divisions of communication, finance and implementation, and in that way, it’ll be very similar,” she said.

Maintaining a strong financial position and being able to “constantly update and change how we view education for this generation” will behoove the person who replaces her, Tiefenthaler said.

“Higher education is in a very disruptive time right now, with the demographic changes and the cost of higher education," she said. “Schools will need to continue to be nimble and adaptable and make sure they’re current and keeping up with this generation.”

Provost Alan Townsend, whom in February the board had selected to serve as interim president, has taken a job at the University of Montana.

A new president is expected to take over in mid-2021.