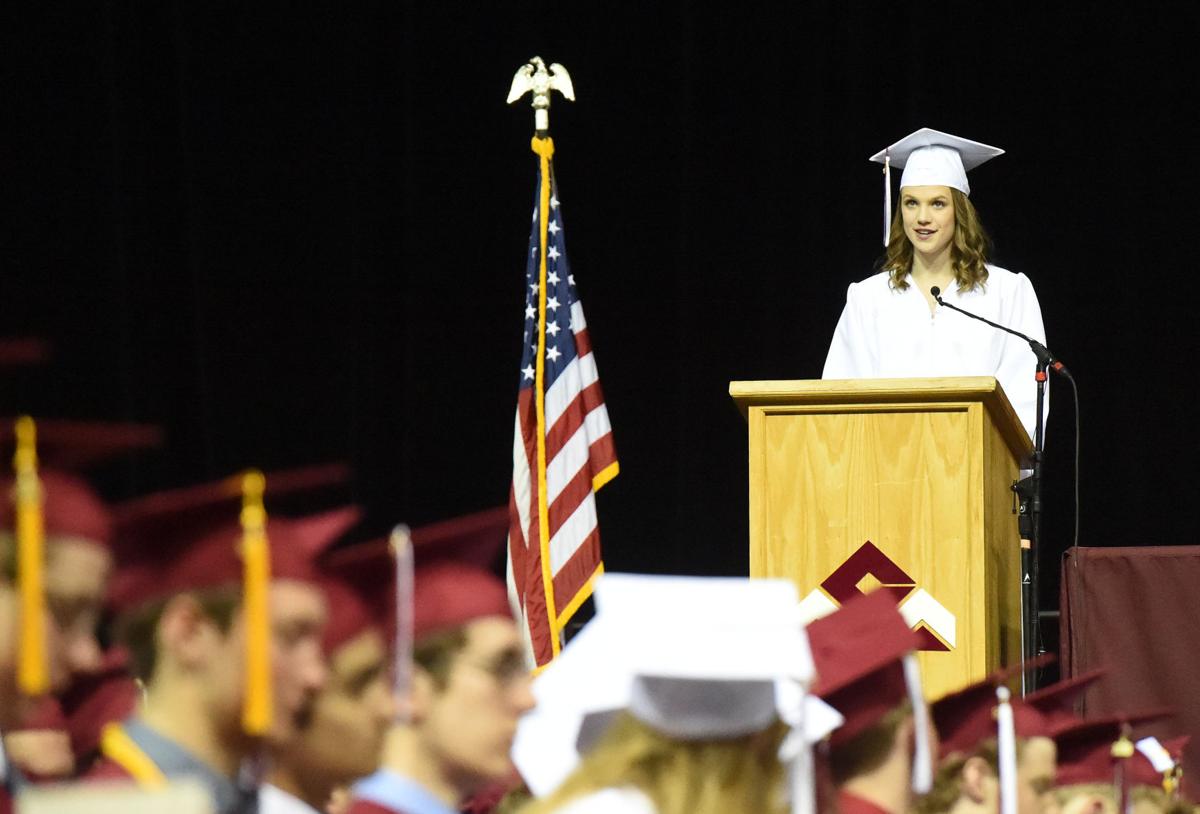 Graduation exercises for Cheyenne Mountain High School were held Sunday May 26, 2019 at the Broadmoor World Arena. Photo by Jeff Kearney. 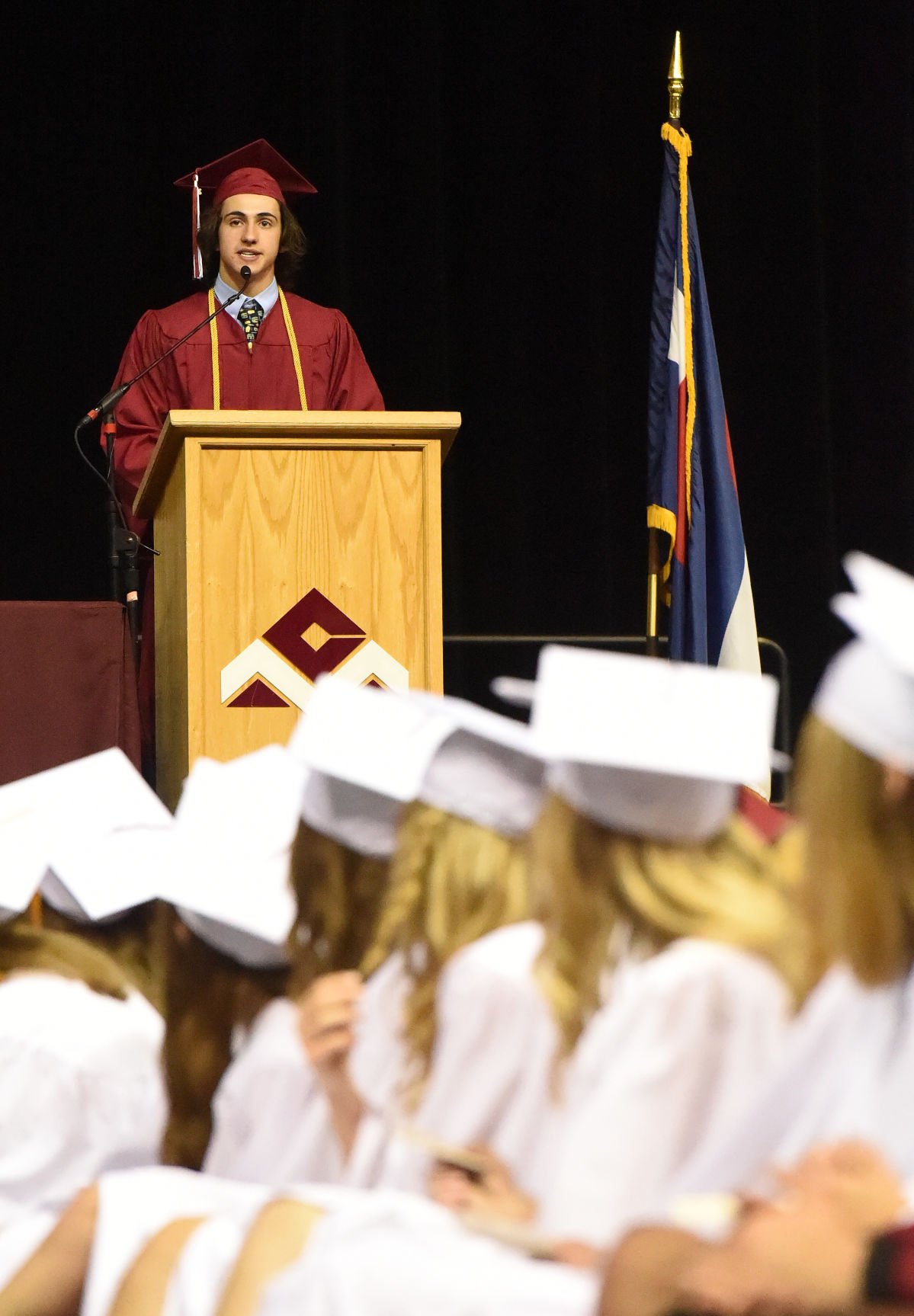 Cheyenne Mountain High School graduates celebrate the end of their K-12 education during commencement exercises held May 26 at The Broadmoor World Arena.

Graduation exercises for Cheyenne Mountain High School were held Sunday May 26, 2019 at the Broadmoor World Arena. Photo by Jeff Kearney.

Cheyenne Mountain High School graduates celebrate the end of their K-12 education during commencement exercises held May 26 at The Broadmoor World Arena.

Cheyenne Mountain School District 12 in southwest Colorado Springs lost its spot as the top-ranked public school district in the state but remains the highest-ranking large district statewide, according to preliminary performance ratings the Colorado Department of Education released Monday.

D-12 is the third best-performing public school district statewide this year, beat out by the smaller districts of Telluride and Kim Reorganized.

The state rankings are based on student performance on standardized English language arts, math and science tests taken in the spring, year-over-year academic growth of students, graduation and dropout rates, scores on PSAT and SAT college entrance exams and college matriculation data.

In addition to D-12, just two other Pikes Peak region school districts earned “Accredited with Distinction” status: Academy D-20 in northern Colorado Springs and Lewis-Palmer D-38 in Monument. Both were cited for having state assessment participation levels below the federal government’s 95% requirement.

In previous years, more districts in the Pikes Peak region have been accredited with distinction. Last year, Manitou Springs D-14 entered the category for the first time but dropped a notch this year.

Edison 54-JT in Yoder also did not achieve the state’s premier ranking as it has in previous years. Low participation was cited as a contributing factor. Edison appealed its designation last year but lost. In 2016, Edison ranked No. 1 in the state.

Results from the performance ratings help the education department and the State Board of Education, which oversees the department, make decisions about how to help struggling districts and schools. Those that fall into the bottom two categories of “turnaround” and “priority improvement” status, risk mandatory state intervention after five consecutive years.

Just one Pikes Peak region school is in the turnaround category: Midland Elementary in Colorado Springs School District 11. It also is the lowest-scoring school in the area.

Three other D-11 schools, Mitchell High School, Galileo School of Math and Science, and West Elementary, are in the second-to-last category. Mitchell is in its fourth year of subpar achievement.

The school worked with state education officials last school year to develop a plan that will be implemented this school year, he said. Strategies include tracking individual student performance throughout the year for grades 9-12 and developing local tests to gauge throughout the year how well students are grasping the state’s academic standards, Mason said.

Fountain-Fort Carson School District 8 had one school, Jordahl Elementary, in the second-to-bottom category.

Schools and districts can appeal the preliminary rankings. Mason said Colorado Springs D-11 might do that for its districtwide accreditation, which dropped from a designation of accredited in 2018 to accredited with improvement plan this year.

The decrease could be attributed to the fact that the state education department did not include growth scores for ninth grade English Language Arts tests, Mason said. State officials said the difference between eighth grade English and ninth grade PSAT scores were too great to calculate growth properly so were not included in accountability measures. The eighth-grade test has a writing component, while the ninth grade test does not — thus state officials cited a lack of confidence in adding those scores this year.

The State Board of Education will adopt final ratings in December, after districts and schools have had a chance to participate in the reconsideration process, during which they can present supplemental materials.

Overall matriculation rates from high school to college, also released Monday, increased 0.5% statewide for the class of 2018, with entrance to four-year college down 0.1% and entrance to career technical education increasing by 1.3% statewide.

Recognizing that the $70,000-plus cost of attendance can cause sticker shock and deter would-be students from applying, Colorado College offic…