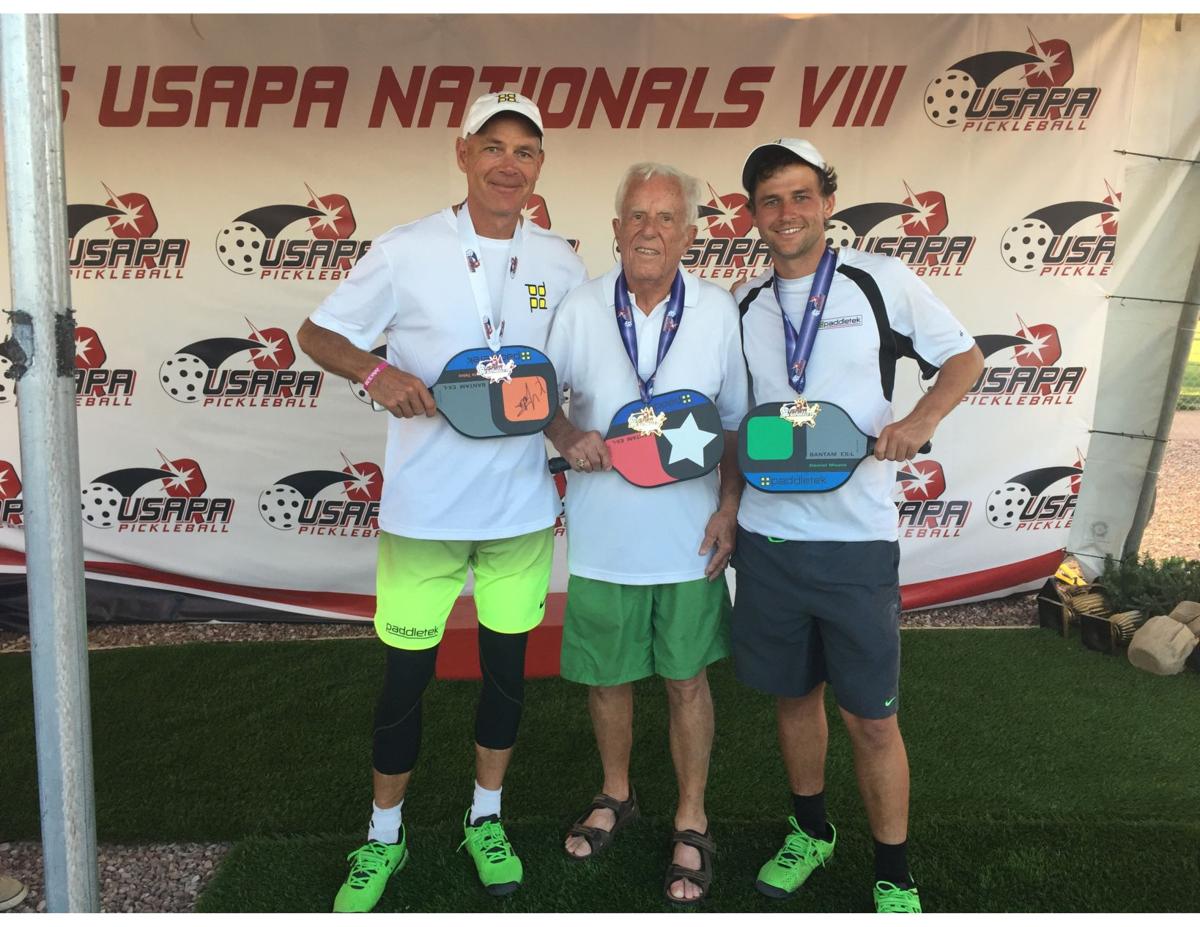 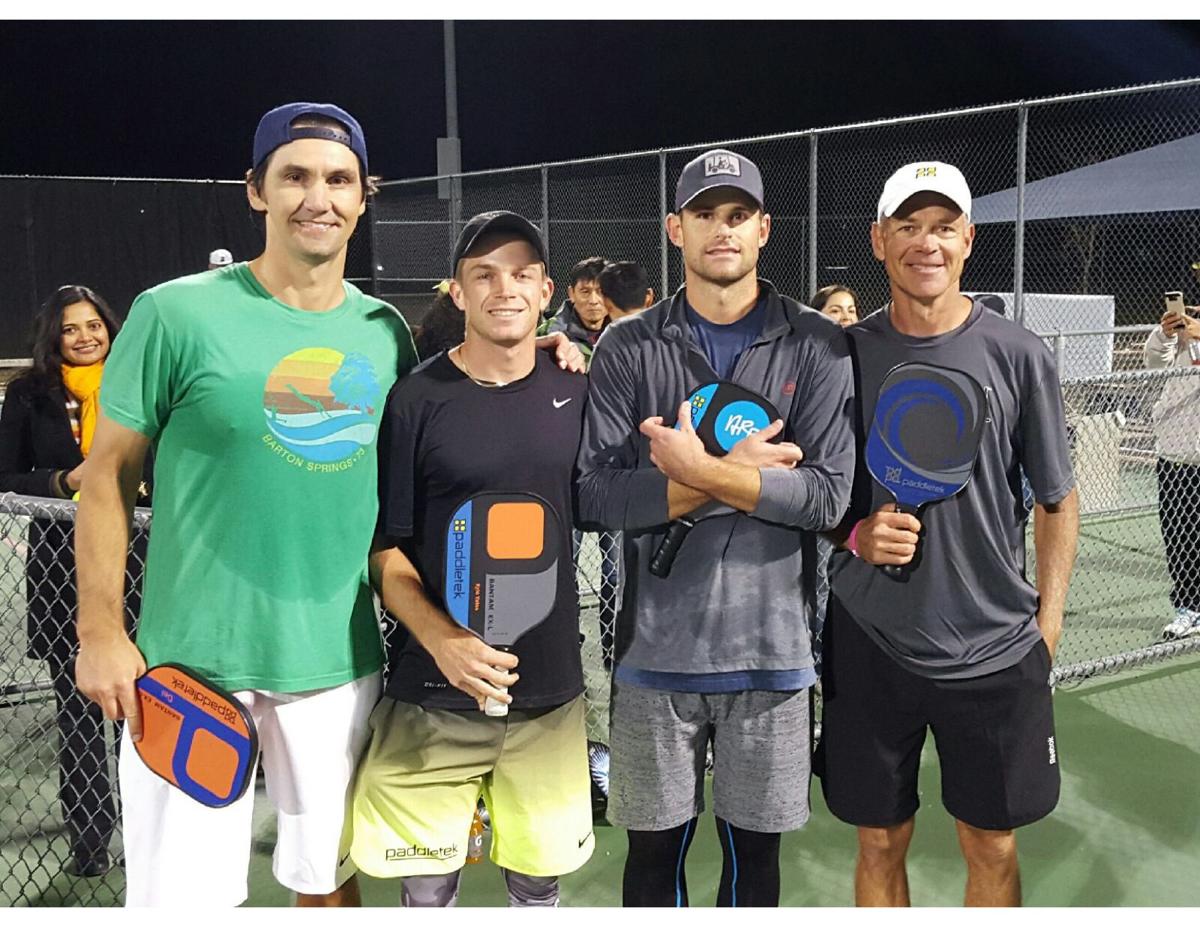 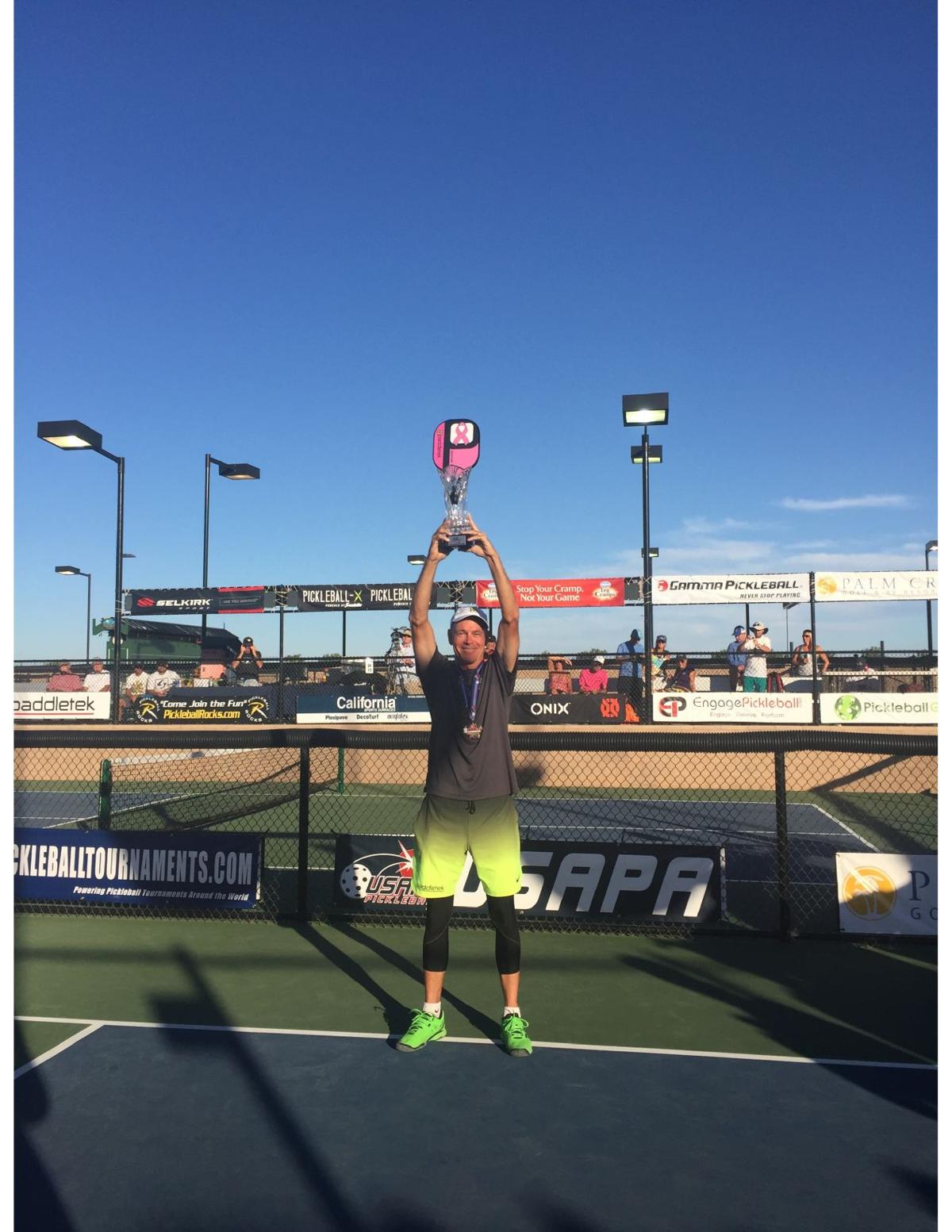 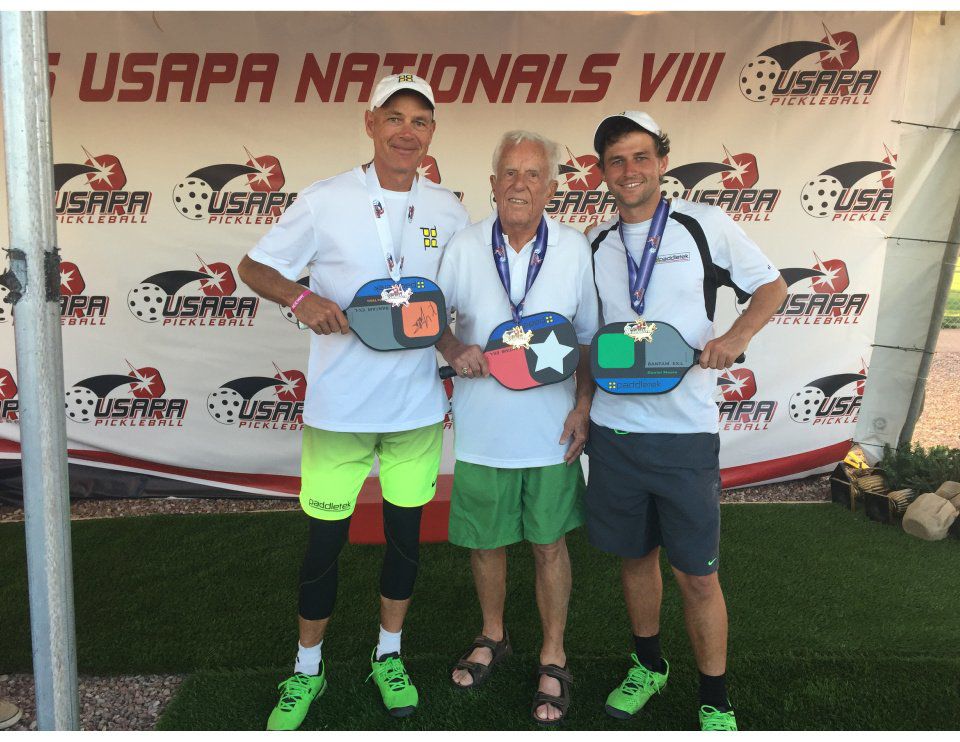 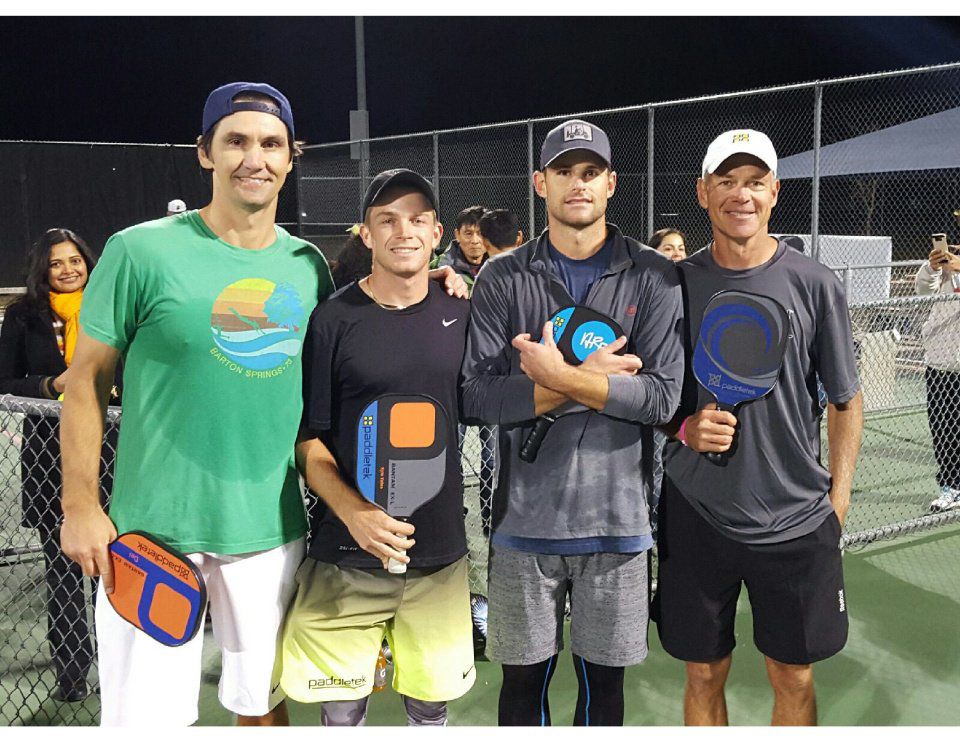 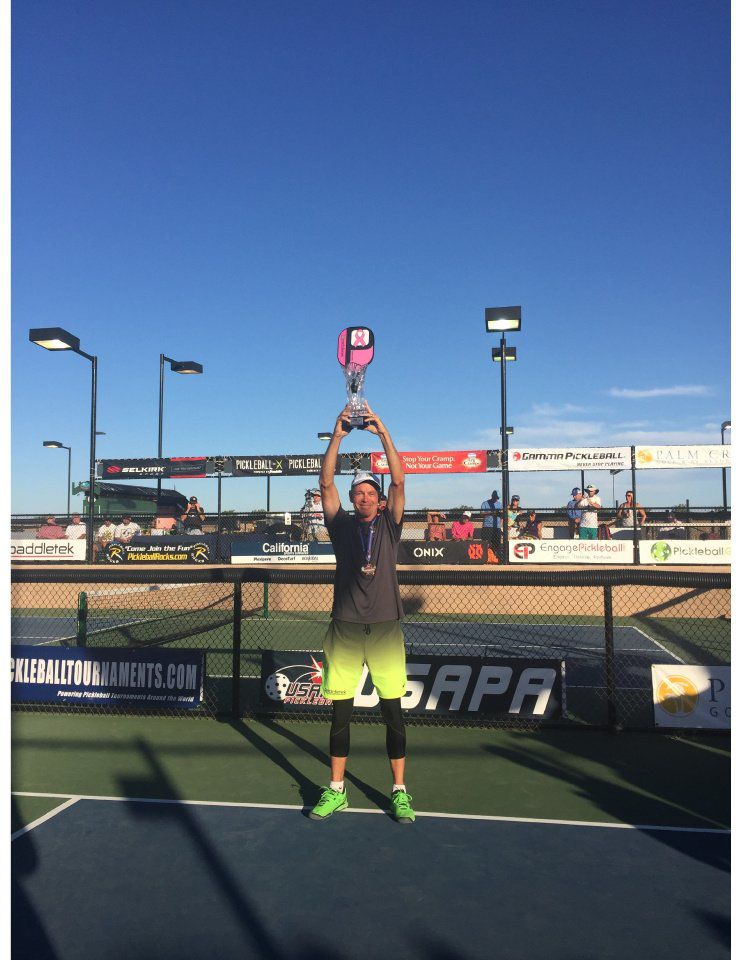 On Nov. 9, at the USAPA Pickleball Nationals VIII in Casa Grande, Ariz., two Cheyenne Mountain men and one Texan made pickleball history.

In a field of more than 800 participants, Daniel Moore, 27, won gold in the 19-and-older singles, becoming a pickleball national champion for the fifth time.That same day, his grandfather, Fort Worth, Tex., resident Carl Brumley, 85, was awarded the gold medal in the 85-and-older singles division.

Not to be outdone, Daniel’s father and Colorado Springs resident Scott Moore followed suit that evening with a gold-medal finish in the 50-and-older singles division, completing the family triumvirate.

“We never thought in our wildest dreams anyone in our family would be a national champion,” said Daniel who played No. 1 singles for the Cheyenne Mountain High School tennis team, helping lead them to two state tennis titles. Daniel now lives in Japan.

“It has changed our lives to discover and become part of what we feel is the most fascinating sport ever,” Scott said. “The combination of mental and physical aspects makes pickleball challenging in numerous ways. Because pickleball happens to be more of a finesse and strategy game than simply speed and power, it can enable different players from different generations to be able to play together. In some ways it’s like playing chess on a court, as you have to think about not just the shot you are hitting but also set up your next move. There is no other sport in the world where a 50-something guy can compete with the 20-somethings, but at least for a season, I am doing it in pickleball.”Before he started playing a few years ago, “most all of my friends were essentially my own age,” Scott said. “But now I have lots of friends in their 20s, as well as in their 80s, which makes it even more meaningful.”

Scott and his wife Susan have four kids, all of whom but Daniel were “made in Japan,” before relocating to Skyway Heights in 2005.

“We had an incredible 16 years in Japan, and I was extremely fortunate to be able to control my schedule, so I would try to finish my work by the time the kids got home from school,” Scott said. “Then the boys and I would play for a couple of hours before dinner and homework.”

Meredith, 25, wasn’t into sports, so she got out of dad’s daily sports camps. But Daniel and his two younger brothers, Jonathan, 24, and Stephen, 21, played almost every day after school and on weekends, whether it was volleyball, roller hockey, basketball, tennis, ping-pong, badminton, soccer, snowboarding or throwing the football or hitting baseballs in the backyard.

At 5, Daniel started playing tennis, and by the time he was a teenager, he was playing at the national level in Japan and was the top player in Nagano Prefecture before leading his high school tennis team to a state title and earning a college scholarship. When he started playing pickleball three years ago, it was like the game he had been prepared for his whole life.

“Daniel was a 5.0 the first day he picked up a paddle, which didn’t surprise me,” Scott said. “What did surprise me was that it only took him a couple of months to start beating me.”

During Nationals VI, in November 2014, the Moores accomplished their first of many pickleball goals: taking gold in all four singles events.

“It felt incredible to have become a national champion, and even better to get to share it with Daniel,” Scott said.

In 2015, they performed better than either anticipated, with Daniel winning both open singles and doubles at the Tournament of Champions, as well as the open doubles, and 19-and-older singles at nationals, and Scott winning the trifecta in the senior open events at both tournaments.

Just when they thought it couldn’t get any better, 2016 somehow did.Scott was able to sweep all nine events he played between the Tournament of Champions and Nationals, leaving in his wake a record that might never be matched. “It was awfully fun,” Scott said. “However, one of my biggest pickleball highlights was, along with Kyle Yates, getting to introduce Andy Roddick to pickleball. Having Andy have a blast and playing pickleball that night in Austin could turn out to be one of the biggest things that ever happened for increasing awareness and credibility for pickleball.”

Daniel has continued to pursue pickleball, though he is only able to play a couple of months a year. He won three pro medals at the U.S. Open, and four at nationals, more than any other male player.

“The best part is not having become ‘pro’ athletes by winning prize money or even being able to say we’ve been respectively the No. 1 players in the world, but definitely all the new friends that we have made and places we have been around the States and world,” Daniel said.

The Moores have turned their passion for travel and pickleball into a family business, and take people on pickleball tours and conduct camps and clinics all around the world. In 2016, they led camps in Mexico, Australia, Japan and Jamaica. This year they will host about 20 pickleball clinics and boot camps, in the U.S., Japan, Mexico and St. Croix in the U.S. Virgin Islands.

In September, the Moores will host their third-annual pickleball tour of Japan. As they tour Japan for a week, they will play quite a bit of pickleball along the way, which the Americans and Japanese have enjoyed on past tours. As the social aspect is definitely one of the reasons pickleball has grown so fast in the U.S., they think the same thing will eventually happen in Japan.

“We are grateful to God for having been blessed with the gifts of great health, hand-eye coordination, very fast reflexes and a supportive family,” Scott said, “all of which contribute to the dream journey that we are living.”