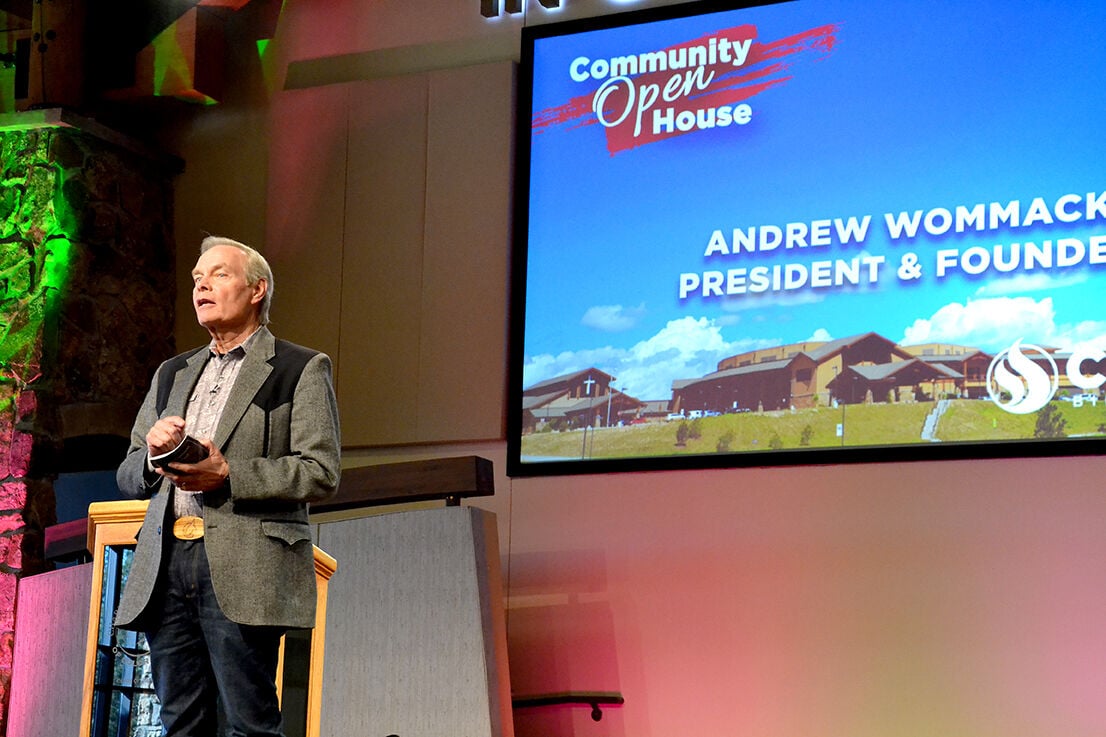 his Charis Bible College in Woodland Park at a community open house Nov. 6. 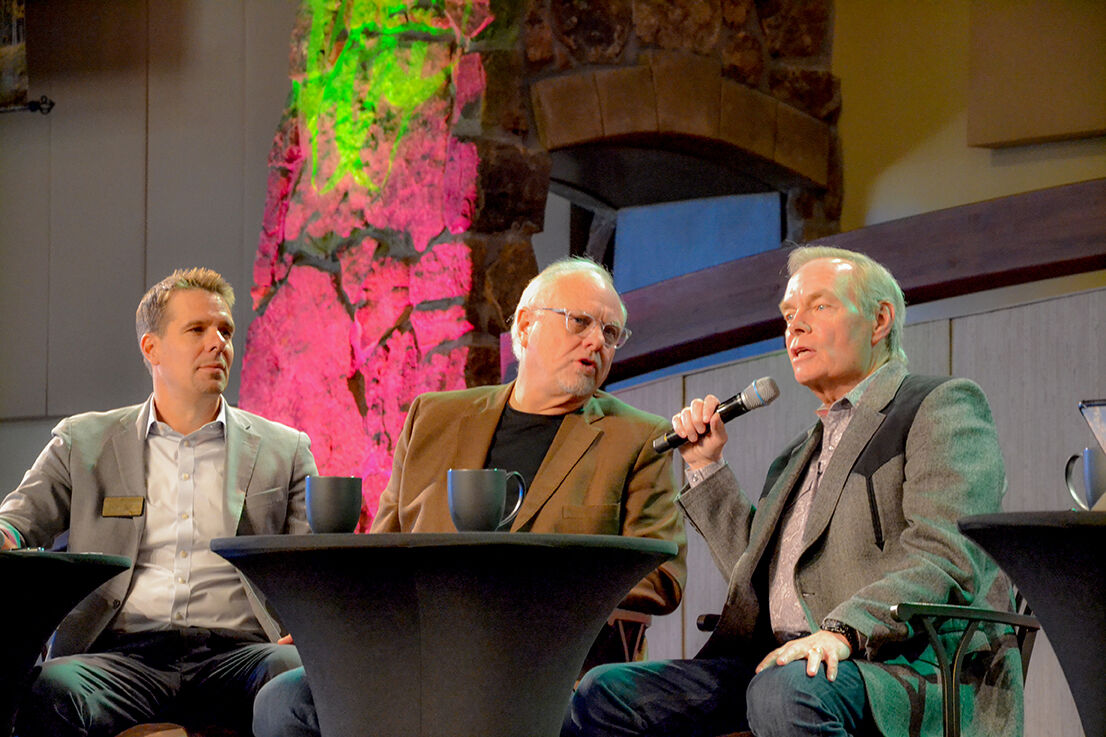 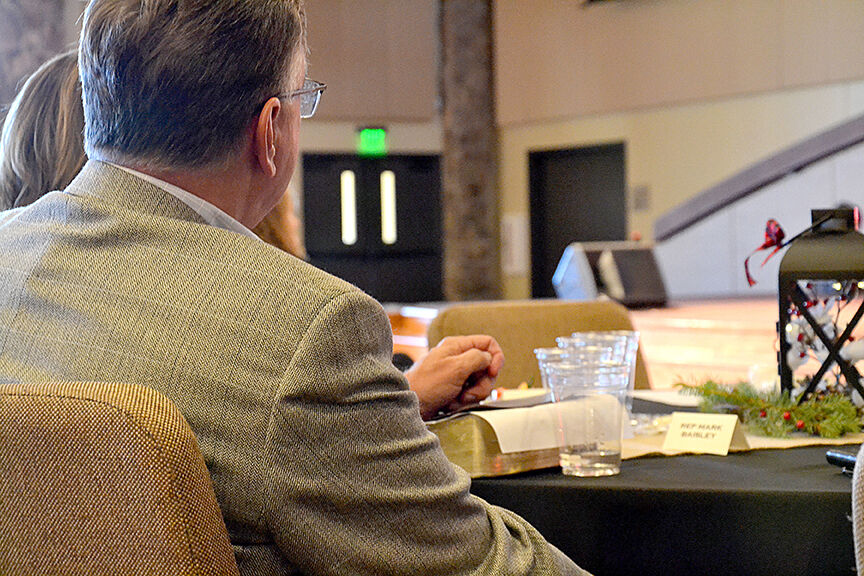 Colorado State Rep. Mark Baisley rests his hand on his Bible at a community open house at Charis Bible College in Woodland Park on Nov. 6. Baisley was one of several guest speakers, who touted the contributions the nonprofit organization has made to the area.

his Charis Bible College in Woodland Park at a community open house Nov. 6.

Colorado State Rep. Mark Baisley rests his hand on his Bible at a community open house at Charis Bible College in Woodland Park on Nov. 6. Baisley was one of several guest speakers, who touted the contributions the nonprofit organization has made to the area.

“I believe this will be a blessing to everyone in the community,” he told the event’s 220 attendees. “God has raised Charis up to touch people, and we’ve got people in every part of the world.”

Student housing has been part of the plan since the college, which Wommack started in Colorado Springs in 1994, opened its nearly 500-acre campus in 2014 in the small mountain town of Woodland Park.

Housing stock has been in short supply in Woodland Park, which has just over 8,100 residents, guest speakers noted, as students have had to find somewhere to live while attending two- and three-year training programs in Christian ministry.

Charis has 837 full-time students on site this semester; officials project enrollment to top 1,000 in January.

But the housing market was tight before Charis came to town, said Debbie Miller, president of The Greater Woodland Park Chamber of Commerce.

“Charis’ intent to build dorms is going to be an asset,” she said in a video the organization produced and showed at the event.

Apartment-style dorms for 40 students to have separate bedrooms and two people sharing each bathroom, will be built on the south and north sides of the land.

The buildings will be concealed by evergreen trees and designed to blend in with the natural environment, Wommack said.

Charis intends to unveil the complete plan in late January, he said.

Each 40-unit complex will cost $5.5 million, plus infrastructure expenses, Wommack said in an interview.

Wommack wants to complete four units for 160 students by the fall of 2023. Another three or four buildings would be erected after that, “depending on cash flow,” he said.

The buildings on Wommack’s campus, which include a 3,165-seat auditorium, have cost $99 million to date. All except one have been created debt-free.

Wommack borrowed $22 million of the $28 million cost of a five-story, 1,022-space parking garage.

The nonprofit organization will pay off the loan in December — a 28-month payback — he said, using contributions from supporters.

Andrew Wommack Ministries, which ships 550 teaching materials for free to people around the world, fields 650,000 calls in its prayer center each year and operates Gospel Truth TV, has been subsidizing $1.25 million to $1.5 million monthly to pay down the parking garage debt, Wommack said.

That money will start being applied to the student housing project after the loan is repaid, he said.

Between Charis and Andrew Wommack Ministries’ operations, which also is headquartered on the campus, Wommack expects to spend $10 million to $12 million on construction annually through 2030.

Building a student activities and event center is on the horizon as well.

The organization is projecting more than $100 million in revenue this year, said CEO Billy Epperhart.

While Charis and the flagship Andrew Wommack Ministries, which was founded in 1978, have become large-scale global operations, the hometown community hasn’t been as receptive to its efforts.

Over the years, residents have complained that as a nonprofit 501c3 religious organization, Wommack’s enterprise doesn’t pay property taxes on a large chunk of land in city limits.

Wommack, 72, drew criticism this year for something he said to followers during an April event at Charis hosted by the Truth & Liberty Coalition, a 501c4 political organization he co-founded in 2017. The coalition encourages those who subscribe to conservative Christian views to run for political office at local, state and national levels.

“Man, as many people as we have in this school here, we ought to take over Woodland Park,” Wommack had said in April, as he urged followers to “take back Colorado" from the socialists and Democrats who have turned the state from conservative to liberal political leadership.

“This county ought to be totally dominated by believers,” he said. “We have enough people here in this school we could elect anybody we want. We could take over this place.”

Wommack brought up the topic Saturday, telling community attendees that he’s “not as well spoken” as some of his staff.

“It was a slip of lip on my part,” Wommack said. “All I was saying is we’ve got so many staff and students here we can make an impact. We can take over — I’m talking about we can make a difference. Our society is under attack.”

Wommack said in an interview after the event that he was “absolutely surprised” by the public backlash following a Gazette article about what he had said.

The people who criticize him for such remarks “want to take over,” he said.

“I think it’s hypocritical for them to criticize that,” Wommack said. “The people who differ from me, they want to have people who they vote for in charge.”

To those who believe politics and religion shouldn’t be intertwined, Wommack says he thinks they’re wrong.

“Politics is getting involved in your community, and Christians should be involved in their communities,” he said.

“In school boards, people are supporting critical race theory and ungodly books being in the school system — they’re pushing their agendas, I’m saying we ought to push morality and the biblical view.”

“There is a narrative in the community that you guys are trying to take over, and I say bull — that’s not what’s going on,” he said in the video. “I just don’t see it from the people I know from Charis. They’re interested and want to be involved in the community, and for a community, that’s what you want.”

“They’re bringing in a tremendous amount of revenue through sales taxes and their homes,” said Mark Rabaut, who opened Microtel Inn and Suites by Wyndham in Woodland Park last year.

Wommack released a new independent economic impact study of his organizations, which projects the bible college and ministry will employ 1,453 people locally by 2030 and generate $4.9 million in sales tax revenue in Woodland Park and $1.2 million in Teller County over the next decade.

"We want to be a constructive part of the community,” said Wommack, who has lived in Teller County since 1983.

$100 million in revenue projected for this year

837 full-time students on site this semester in Woodland Park; 1,000 expected enrollment in January

$5,500 a year tuition cost for two- and three-year programs

20-24 major events held annually at Charis, including conferences, trainings and in-house Easter and Christmas theatrical productions for the public