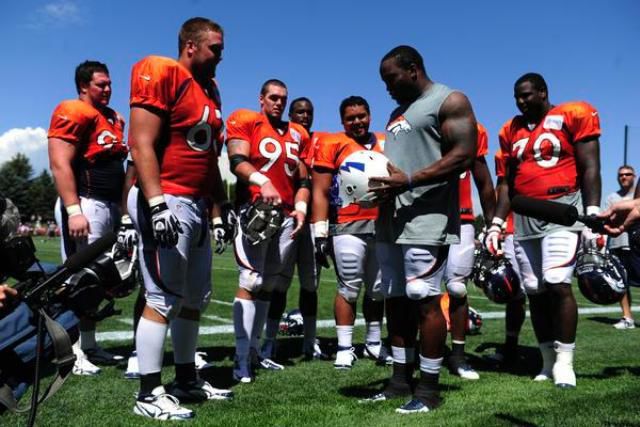 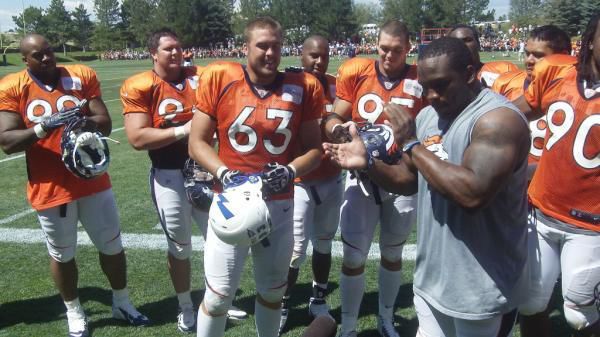 Ben Garland (63) is presented an Air Force helmet by his Broncos teammates, including linebacker Joe Mays (foreground). Garland's helmet and sabers he got from Air Force upon graduation were lost in the Waldo Canyon Fire. Photo by FRANK SCHWAB, THE GAZETTE

Ben Garland (63) is presented an Air Force helmet by his Broncos teammates, including linebacker Joe Mays (foreground). Garland's helmet and sabers he got from Air Force upon graduation were lost in the Waldo Canyon Fire. Photo by FRANK SCHWAB, THE GAZETTE

When Ben Garland called the Air Force Academy Association of Graduates to ask if he could replace his sabers from graduation, the ones he lost in the Waldo Canyon fire, he’d always get forwarded to someone. Or the person he was supposed to talk to would mysteriously be on vacation.

Garland, a former Air Force defensive lineman with the Denver Broncos, figured he wouldn’t be successful anyway. Air Force cadets can buy two sabers upon graduation, and no more. They’re generally given to family members or mentors as a way to pay them back for their support. Garland gave his to his grandparents, Hal and Sharen Garland, who he said got him through the academy. The sabers, and his Air Force football helmet, were lost when his grandparents’ house was destroyed in the fire.

“One of the things my grandparents were so sad to lose were the helmet I got them and the sabers they were given after graduation from the academy,” Garland said.

Judianne Atencio, who does marketing work for many Broncos players, saw the sabers Garland lost when he tweeted a picture after the fire. Then she heard Garland say the sabers couldn’t be replaced during a television appearance with KCNC’s Vic Lombardi shortly after the fire.

The biggest surprise is that everyone kept Tuesday’s presentation a secret for weeks.

Garland had no idea why his teammates were leading him off the field after practice Tuesday, to an area where the media congregates. He tried getting back in line with them, and they pushed him back out front. Then Air Force Academy Association of Graduates president and CEO William Thompson stepped forward with two sabers to replace the ones he lost. After that, Garland was given an Air Force helmet. While 13 of his teammates stood around him and clapped, the 300-pound Garland tried to keep from breaking down in tears.

The Broncos paid for the helmet. His teammates chipped in for the sabers. Linebacker Joe Mays went above and beyond, paying for display cases for the items. It’s not common for NFL veterans to do anything for a first-year player fighting for a spot on the roster, like Garland is, but the gestures show the respect they have for him.

“He’s an awesome guy,” Mays said. “You want to do special things like that for a person like Ben. He’s just an awesome human being. I’m just glad we were able to get him something.”

Atencio did a lot of the work behind the scenes to replace the sabers. She figured the process would be difficult, but the Air Force athletic department and AOG were immediately willing to help, considering the circumstances.

“I thought it was going to take a lot of letters and phone calls – not at all,” Atencio said. “They were like ‘We’re ready to go, what do you need?’”

Whenever Garland tried to get a hold of the AOG there was always a hang up – but that was Atencio’s doing as well.

The surprise held up. Thompson gave him the sabers and joked about exceptions to rules, while Garland thanked him with a stunned look on his face and told him what the gesture meant to his family. He turned and hugged his teammates.

His grandparents had 30 minutes to evacuate their Mountain Shadows home during the Waldo Canyon fire and many of their belongings were left behind. Some of the items lost in the fire were irreplaceable, including some heirlooms dating back to World War I, from generations of Garlands serving their country. The Broncos couldn’t replace everything, but Garland was touched by their effort to replace what they could.

“This means the world to me,” Garland said.