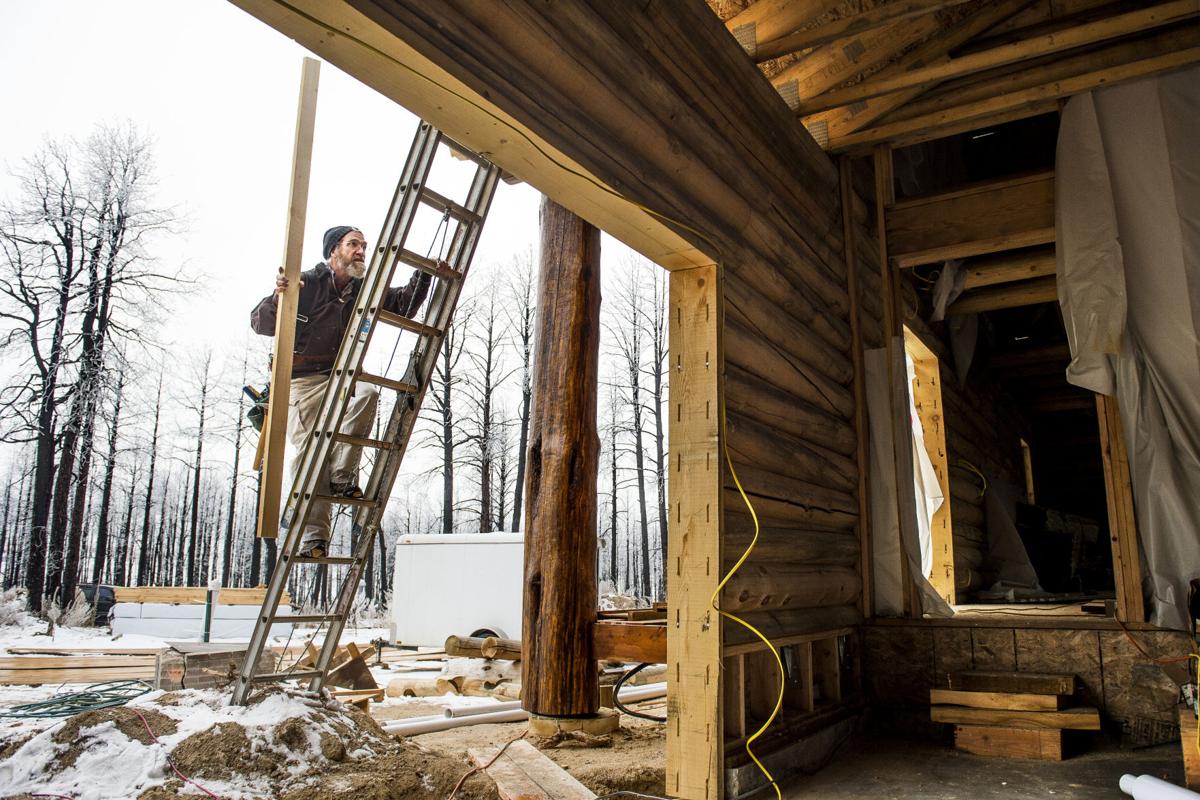 Lead carpenter Terry St. Louis carries a board onto the roof of a home being rebuilt off Pinery Drive in Black Forest Wednesday, November 26, 2014. Of the 488 homes destroyed, 154 have been rebuilt and 110 others have had their building permits approved. Michael Ciaglo, The Gazette 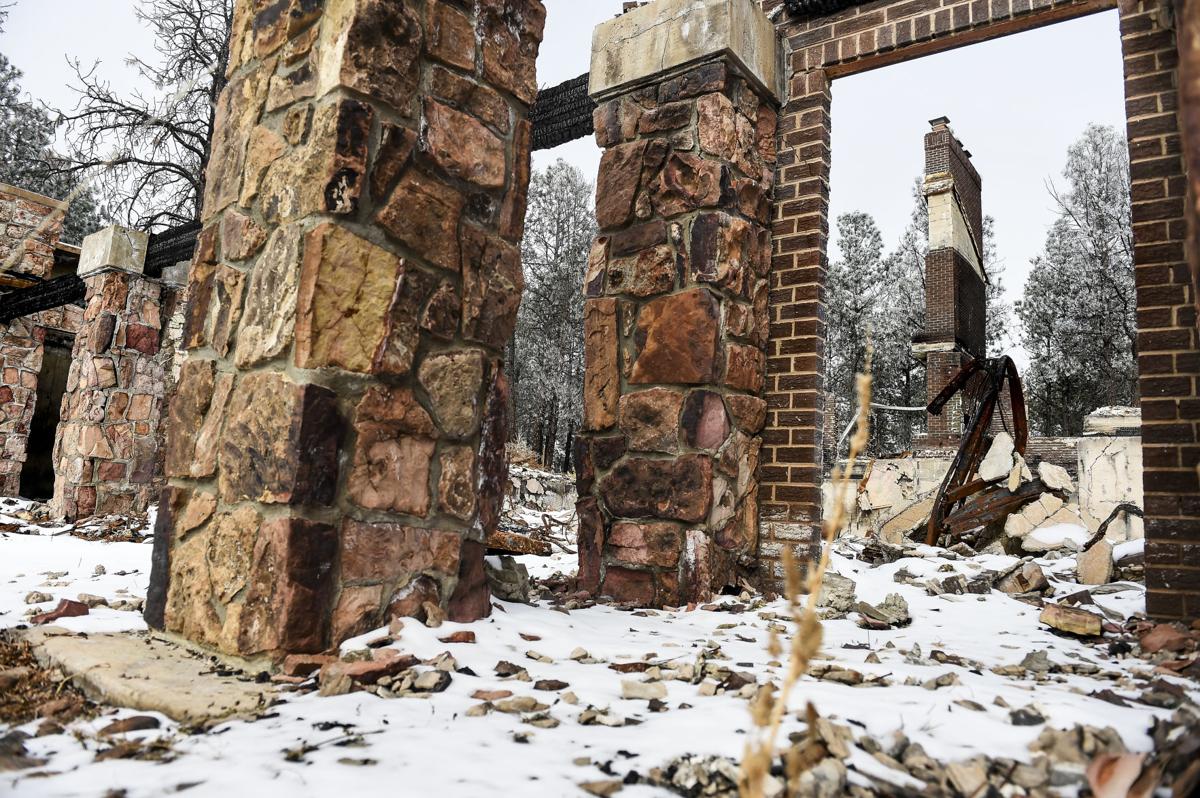 A home on Pinery Drive still sits in ruins nearly a year and a half after the Black Forest fire. Of the 488 homes destroyed, 154 have been rebuilt and 110 others have had their building permits approved. Michael Ciaglo, The Gazette

Lead carpenter Terry St. Louis carries a board onto the roof of a home being rebuilt off Pinery Drive in Black Forest Wednesday, November 26, 2014. Of the 488 homes destroyed, 154 have been rebuilt and 110 others have had their building permits approved. Michael Ciaglo, The Gazette

A home on Pinery Drive still sits in ruins nearly a year and a half after the Black Forest fire. Of the 488 homes destroyed, 154 have been rebuilt and 110 others have had their building permits approved. Michael Ciaglo, The Gazette

There are 154 new homes in the Black Forest neighborhood, and nearly 18 months after the devastating fire more than half of the hundreds of houses destroyed are on track to being rebuilt.

But home construction is a small part of how Black Forest residents measure recovery, a process that could involve decades of forest restoration and changing the community's culture. The 2013 Black Forest fire was El Paso County's second devastating blaze in two years, and recovery managers quickly learned that Black Forest could not compare to the 2012 Waldo Canyon fire.

When Eddie Bracken formed the recovery nonprofit Black Forest Together, he and others planned to follow the example of Colorado Springs Together, another nonprofit that organized debris removal and focused on rebuilding the 347 homes destroyed in the Mountain Shadows neighborhood in 2012.

As residents grappled with homeless livestock, thousands of charred trees and the loss of many home businesses, it became clear that Black Forest would have to forge its path to recovery.

"I thought, we've got to match the Waldo Canyon guys in terms of rebuild," Bracken recalled. "But it didn't take me long to realize it's like comparing apples and oranges."

Unlike the more suburban Mountain Shadows, Black Forest is an isolated community where residents sought solitude among the dense ponderosa pines. Most homeowners boast a proud Black Forest "pioneer spirit" that brought them here to build their homes, own livestock and live close to the trees. But the way of life in Black Forest meant residents had to redefine post-fire recovery to include more than just rebuilding homes - it meant replanting and cutting down parts of the beloved forest and the loss of historic cabins and barns.

"You have a different type of person in the Black Forest. In Waldo it was, 'Do I rebuild, do I not rebuild?' In a couple of years you'll have the same subdivision," said Roger Lovell, head of the Pikes Peak Regional Building Department. "But in the Black Forest it was all gone."

The forest was once a main draw for residents, but the area's famed ponderosa pines have become its greatest hazard. Homeowners can cut down their burned trees or keep them, but Scott MacDonald, Black Forest Together's forest recovery program director, sees the thousands of acres of living trees as a greater threat. The forest still has areas with decades of overgrowth and much private property that needs to be mitigated, MacDonald said.

"I get scared when I drive down Burgess Road," he said. "Because it's a disaster waiting to happen."

Building over the burn

Jennifer Buescher lost every tree on her 6-acre lot along Pinery Drive, but like many of her neighbors who now live in a forest of thick black sticks, she is rebuilding.

"Black Forest folks are pretty hearty, we definitely have the pioneer spirit out here," said Buescher, who was bundled up against the cold and helping build her home the day before Thanksgiving. "(People ask) you're not afraid to live in the forest? Well, why? There's nothing to burn anymore."

On June 11, 2013, Buescher and her husband were one month from finishing a new home on Pinery Drive when the Black Forest fire ignited. Fed by heat and high winds, the fire began to burn homes. After a couple of days, 488 houses, 14,280 acres and countless barns and outbuildings had been destroyed. Two people were killed.

After the fire, the Bueschers started from scratch, opting for a smaller log house - which regional building officials assured them could withstand another fire. They began building in March. It's been slow going, but the home's Montana-log exterior is nearly finished. Inside, long windows have expansive views of their property, reduced now to acres of charred trees they will leave standing.

"We'll use them for firewood," Buescher said. "And they still make a good windbreak."

Some of the Bueschers' neighbors have clear-cut their properties, transforming areas of thick forest to open meadows. The homes scattered throughout the forest could not be more different - large and small stucco houses, modular units and some trailers bolstered by hay bales.

"There is everything out there from the $5,000 modular to the million dollar homes," Lovell said. "People are doing a lot of different things. Other people are real fire savvy."

Thousands of dead trees and homeless livestock have made rebuilding Black Forest slower than Waldo Canyon. Some of the first buildings to return to Black Forest were outbuildings - barns and stables - for residents who had been boarding horses elsewhere for months, said resident Kathy Russell, who volunteers with Black Forest Together.

For many others, the dead trees are a source of trauma and will prevent them from returning to the forest.

Cutting down the forest

Black Forest Together tracks rebuilding, but most of its energy is focused on the future of the forest, MacDonald said.

MacDonald and Russell have encouraged neighbors to band together and create community fire mitigation plans that require them to do what some found unthinkable before the fire - cut down live trees. The future of Black Forest, a 70,000-acre region that extends far beyond the neighborhood that burned, depends on homeowners shedding some of their individualist mentalities and learning to cut down trees together, MacDonald said.

"There's a heavier price to pay" if residents don't mitigate, Russell said. "If you love the forest, you have to cut some of it down."

MacDonald has been working with residents to create Firewise Communities, a national program that promotes fire mitigation to small groups of residents. Three or four clusters of neighbors in Black Forest have gotten the certification, and MacDonald said at least two more groups are forming. In an area mostly full of private land, which exempts it from some county, state or federal funding, banding neighbors together might be the Black Forest's only way to treat the forest as a whole and prevent another devastating fire.

Although some such as Buescher see their charred properties as nearly fire-proof, other parcels were untouched by flames and are now a fire hazard, MacDonald said.

For Russell, mitigation in Black Forest is not just a safety plan, but a way to restore hope, even to those whose properties were destroyed by fire.

"When we go out and talk to a neighborhood, we could tell them, 'Yes, it's possible. Yes you can make your neighborhood safer.' And we could start to see hope in their eyes," Russell said.

"If you've got black land, the hope is you can make your land beautiful again, which is why we all came here. Why I came here," Russell added. "If it's burned, it won't be the same forest. It will never again look the way it did. But it will be beautiful again."