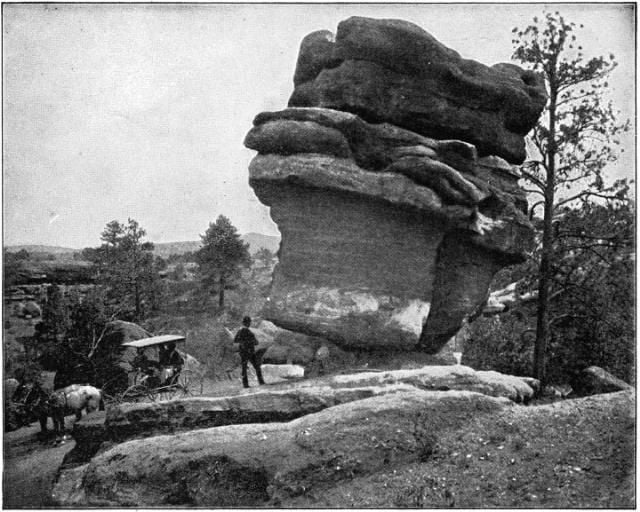 This photo was taken in 1894, about the time 14-year-old Curt Goerke began taking photos of tourists at Balanced Rock. It was so lucrative, his father, Paul Goerke, bought Balanced Rock, Steamboat Rock and Mushroom Park for $400 and built a business. Photo by Courtesy of Special Collections, Pikes Peak Library District 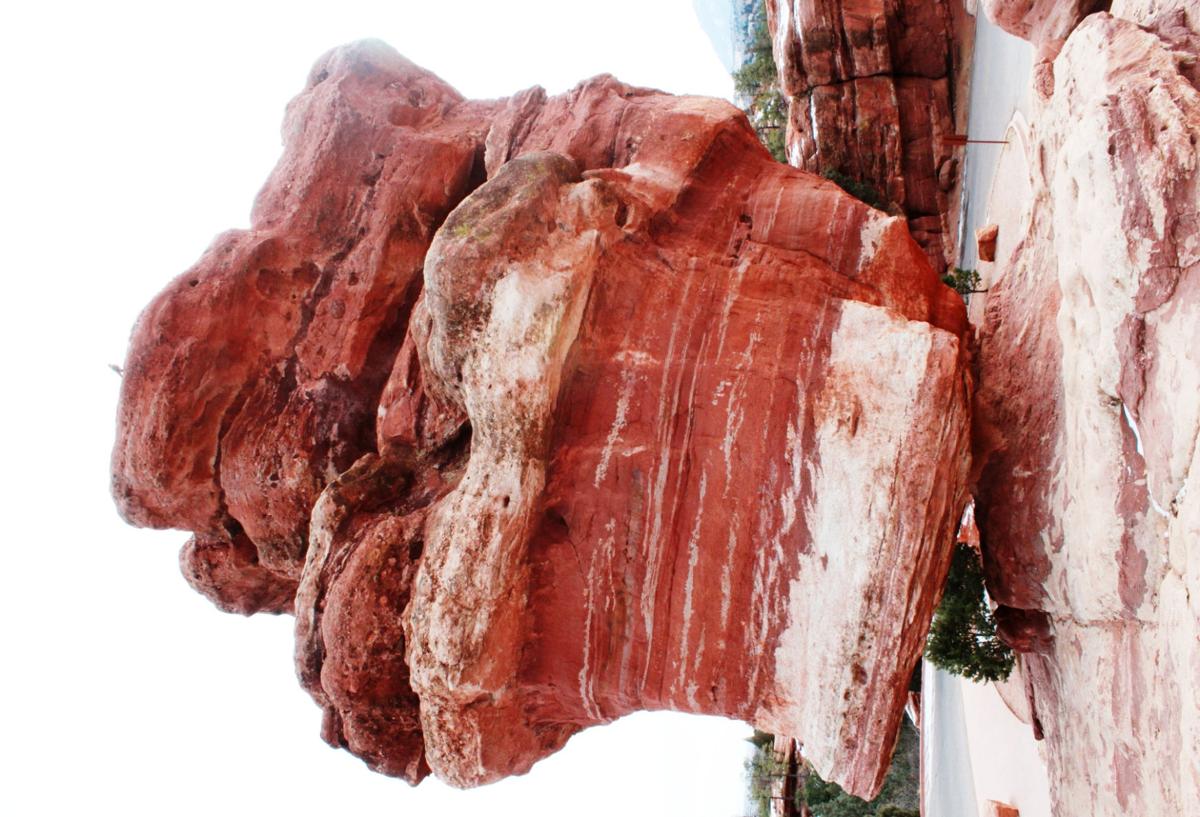 This photo was taken in Dec. 2011. It shows how the Balanced Rock has weathered and changed over the decades since the 1894 photo was taken. Photo by BILL VOGRIN / The Gazette 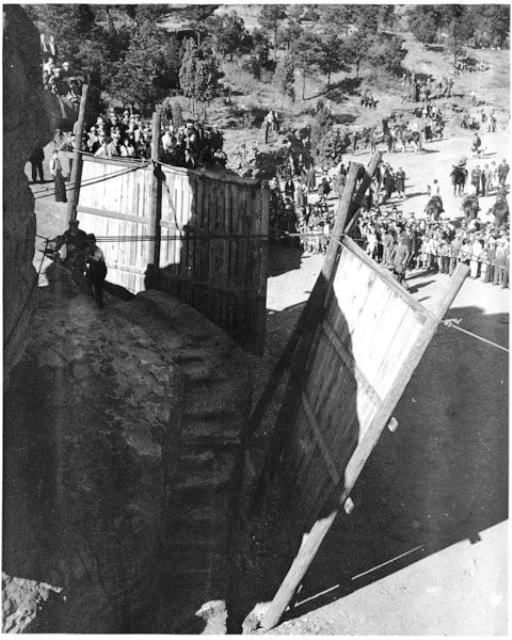 This photo was taken in 1894, about the time 14-year-old Curt Goerke began taking photos of tourists at Balanced Rock. It was so lucrative, his father, Paul Goerke, bought Balanced Rock, Steamboat Rock and Mushroom Park for $400 and built a business. Photo by Courtesy of Special Collections, Pikes Peak Library District

This photo was taken in Dec. 2011. It shows how the Balanced Rock has weathered and changed over the decades since the 1894 photo was taken. Photo by BILL VOGRIN / The Gazette

Ever wonder what will happen when Balanced Rock — the iconic 700-ton red sandstone ballerina perched on its tiptoes in the heart of the Garden of the Gods — no longer lives up to its name?It is, after all, inevitable that the 290-million-year-old rock will fall. Too many factors are working against it.Maybe it will it be dislodged by erosion. Or wind. Perhaps it will succumb to Colorado’s notorious freeze-thaw cycles. Or even an earthquake.

The bigger question is: When it does tip off its precarious pedestal, will it roll down the steep road beneath it toward Manitou Springs? Will it simply block the road? Or will the force of the impact cause it to fracture into pieces?No need to wonder. It already has happened.

In 1936, an anonymous cousin of the Balanced Rock stood on a cliff about a half-mile to the south along the road to Manitou.

Park officials said boys had thrown rocks down a crevice behind the great boulder and they had become wedged against it. With each freeze-thaw cycle, they slid deeper and deeper into the crevice, eventually causing the boulder to move two inches. The teetering rock was deemed a danger to the public and it was ordered removed.

A reporter from The Gazette & Telegraph covered the event.

“Slowly this great rock, equal in size to the Balanced Rock but not so picturesque, was pushed over,” said a story in the April 12, 1936, Gazette & Telegraph. “It swayed. A workman at a jack gave a final twist and over went the great boulder as moving picture cameras clicked.“The great rock was shattered into many fragments.”Which leaves the question: When will the Balanced Rock fall down?And then what?

Those exact questions used to give nightmares to Paul Butcher, retired director of the Colorado Springs Parks, Recreation and Cultural Services Department.

In fact, not long after he became director in 1994, Butcher was forced to contemplate — for a few heart-pounding, excruciating minutes — life without Balanced Rock.

“One morning I got a frantic call from a staff member who said the Balanced Rock was down,” Butcher said. “I was really panicked. Sheer panic. I really believed it happened.”He dispatched an aide to assess the damage as he considered his options.

“I knew the public wouldn’t understand,” Butcher said, recalling that April morning. “There wouldn’t be any forgiveness for letting the Balanced Rock fall. And I knew the expectation would be that we put it back up.”Butcher’s memory of the day is vivid because of what Balanced Rock means to Colorado Springs.

“There were a lot of things going through my mind,” he said. “I remember thinking it was a horrible thing to have happen when I was parks director. It was very serious.”

Did it crush tourists, Butcher wondered, perhaps as they stood, arms above their heads in an “Atlas” pose, pretending they are holding the rock up? Or, ironically, were they pretending to push it over?

“A billion photos have been taken there over the years,” he said of the rock and park, which attract a couple millions visitors every year.

Or, he feared, it might have rolled down the hill to the south and crashed into Fountain Creek, or worse.

“I thought if it fell downhill, it could roll forever down to the creek and U.S. Highway 24.”Then Butcher realized what day it was: April 1, 1994. The rock was still standing, as it has for eons.

Over the years, until his retirement in 2009, Butcher was asked about the future of Balanced Rock and whether preventative measures, beyond some concrete poured around its base years ago, were necessary to keep it upright.

“I never had an answer,” he said.Heck, he didn’t even he know the details of how that concrete got poured around its pedestal.Butcher was surprised to learn of the 1936 tipping of a similar rock about a half mile south of the famous formation. And he sighed when he learned that it shattered into fragments that were used to build walls and roads in the park.

“I never thought of it falling and cracking,” he said. “If it did a ‘Humpty Dumpty’ thing and broke into pieces, I’d have no hope of fixing it. There you see the futility of trying to put it back up.”

And it has a colorful history.

It starts millions of years ago when the Fountain formation of sedimentary sandstone came roaring up from thousands of feet deep in the earth. Thomas Grose, geology professor emeritus at the Colorado School of Mines, said Balanced Rock was sculpted over the following millennia by glaciers, rivers, wind and rain.

“Erosion of the uplifted rock has proceeded ever since,” said Grose, who produced the first geologic map of the Garden in 1956 during his teaching tenure at Colorado College.It’s modern history goes back to the 1890s.

Balanced Rock was not part of the original 480 acres donated to the city in 1909 by the children of Charles Perkins to create the Garden of the Gods. It was private property and a big business.

Published reports say 14-year-old Curt Goerke began taking photos of tourists with the rock in the 1890s, charging 25 cents apiece. Demand for photos was so high that his father, Paul Goerke, bought Balanced Rock and nearby Mushroom Park for $400.

Within a few years, they built a photography shop, attached to adjacent Steamboat Rock, where they processed the photographic wet plates and developed prints. Business was lucrative and they opened a concession stand, sold photo supplies and even cut stairs into Steamboat Rock and erected a telescope on top.

As cameras became cheap and popular with tourists, Curt Goerke built a tall wooden fence, estimated at two miles long, surrounding his property and Balanced Rock to prevent freeloading. He charged 25 cents admission and put dozens of signs advertising the “wonders” inside the fence, prompting complaints from area residents and visitors who wanted access and who objected to the commercial nature of the site.The rock was part of a 20-year legal tug-of-war between Manitou Springs and Goerke. It even became tied up in Goerke’s 1915 divorce and led to the rock becoming property of the city.Goerke’s daughter, Grace Goerke Boughner, told the story to the Gazette Telegraph in 1985.

After years disputing Manitou Springs’ claim of access to the road to Balanced Rock, the town sued in April 1910 and an El Paso County District Court judge ruled in favor of the town, granting it two-thirds ownership of Balanced Rock and one-half ownership of Steamboat Rock by virtue of a county road and right-of-way to be built through the rocks.

In 1914, the Court of Appeals overturned that ruling and gave Goerke full ownership of the rocks.

Then, in 1915, Goerke Boughner said, her father granted a public right-of-way in a scheme to deny his wife a claim to the property.

After the divorce was final, Goerke tried to revoke the right-of-way, but the city refused, leading him to sue in a case that dragged on for years.Eventually, in 1932, Goerke lost on appeal and sold his 275 acres, which included Balanced Rock, to Colorado Springs for $25,000. It was front-page news on Feb. 19, 1932, when the city held and “emancipation celebration” to tear down the fence, giving the public free access to Balanced Rock.

In subsequent years, the biggest threat to the formation has been vandals — people trying to topple the Balanced Rock.

The stories go back as far as 1910 and center around “a group of Colorado College students” who either used a jack or picks and shovels in an effort to bring it down.

Al Gonzales, a caretaker who lived in the park for 28 years, said vandals — folks who paint and carve graffiti into the stone — are a huge threat to the rock as well as those determined to conquer it, usually at night.“You wouldn’t believe what people do to the rock,” Gonzales said. “People put beer bottles on top. They put orange cones on top of it. We caught a guy and girl laying on a blanket up there one night.”

The other threat is Mother Nature. He recalled how some of Goerke’s old metal fence posts protruded from the rock surrounding Balanced Rock.“About 25 years ago, we took torches and cut those metal stakes off flush with the ground,” Gonzales said. “As the dirt and stone eroded over the years, it looks like those pipes have grown six or eight inches. They are sticking up again.”

Which leads back to the question of what would bring the Balanced Rock tumbling down.“For whatever reason, all the rock around it eroded away and it did not,” said Grose, the geologist. “The processes of erosion haven’t been enough to undercut that particular rock. And what’s left holding it up is relatively well-protected from the direct influences of snow and rain. It could be there a while.”But, eventually, those forces will prevail, he said.

He noted that if Balanced Rock were in California, with all its earthquakes, it likely would have fallen years ago. But short of a major tremblor here, the rock probably isn’t going anywhere soon.And, as anyone who visits Balanced Rock knows, someone has tried to protect the rock from erosion by surrounding its pedestal with concrete. But who was responsible? Butcher didn’t know. Neither did Gonzales nor Grose.Grace Goerke Boughner had the answer in 1985:“My father put it around the base because the stone is so soft and the tourists would use their knives to take a chip for a souvenir,” she told the newspaper. “He had to protect it. The date of 1910 is just about right.”Goerke was just protecting his investment.