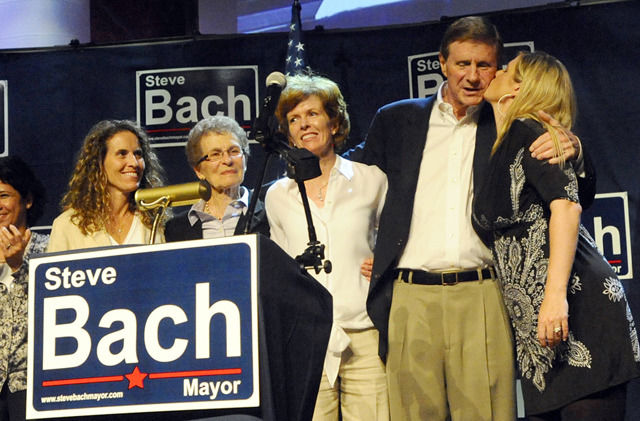 Mayor-elect Steve Bach, with his wife Suzi, receives a kiss from his daughter Alison Rank after his acceptance speech Tuesday. Photo by CHRISTIAN MURDOCK, THE GAZETTE 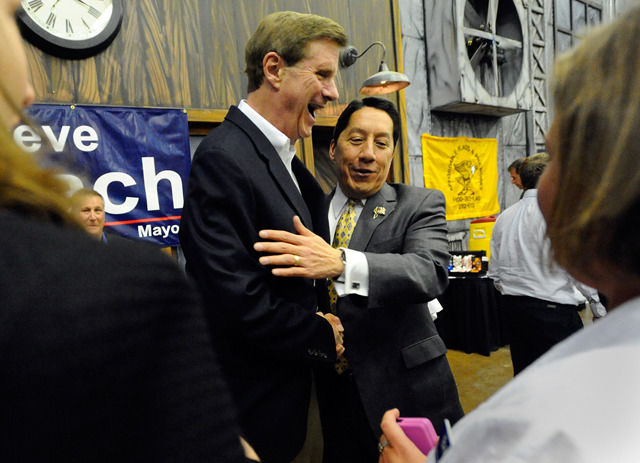 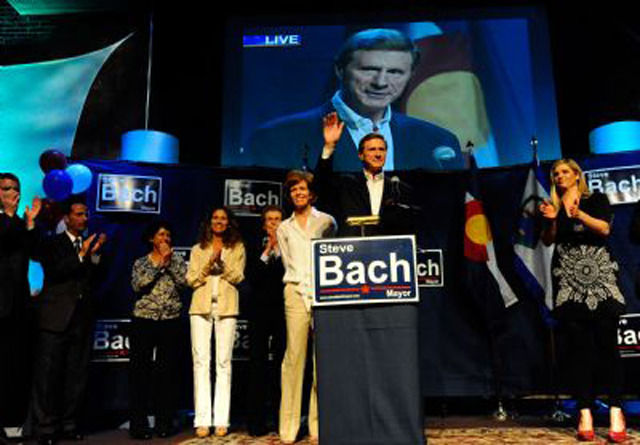 Mayoral candidate Steve Bach gives his acceptance speech with his wife Suzi and family by his side Tuesday, May 17, 2011, during the Steve Bach mayor campaign gathering at Mr. Bigg's in Colorado Springs. Photo by CHRISTIAN MURDOCK, THE GAZETTE

Mayor-elect Steve Bach, with his wife Suzi, receives a kiss from his daughter Alison Rank after his acceptance speech Tuesday. Photo by CHRISTIAN MURDOCK, THE GAZETTE

Mayoral candidate Steve Bach gives his acceptance speech with his wife Suzi and family by his side Tuesday, May 17, 2011, during the Steve Bach mayor campaign gathering at Mr. Bigg's in Colorado Springs. Photo by CHRISTIAN MURDOCK, THE GAZETTE

Steve Bach, a conservative businessman who pledged to shake up City Hall and bring jobs to Colorado Springs, sailed to victory with a wide margin Tuesday in the historic and hotly contested race to become the city’s first strong mayor.

“We will have some long days getting through these times, but we will get there and we will do it together,” Bach said after his opponent, Richard Skorman, called him to concede the race.

“I love this city, and I believe in our future, and I will work hard every day to be the best mayor our city has ever had,” said Bach, 68.

Bach will take the oath of office June 7.

At the Mr. Biggs entertainment center, where Bach held his election night party, a big cheer erupted when early results showed Bach leading with 57 percent of the vote. A few minutes later, the theme song from the 1976 movie “Rocky” filled the room. Even 30 minutes after his victory speech, Bach’s supporters continued to cheer.

Skorman, 58, is a downtown businessman and former city councilman who had the backing of the city’s police officers and firefighters.

Skorman said Bach told him “I hope we can work together to help the city” over the phone.

“I’m going to go back to my business life and enjoy that, and if I can find a place to get involved in the community, I will,” he said. “I care about my community.”

Bach, a commercial real estate broker with longstanding ties to the business community, campaigned on the pledge to improve the business climate by cutting red tape at City Hall. He portrayed himself as a nonpolitician who can bring new ideas to the job as well as decades of business and marketing experience and a history of building coalitions.

Throughout the campaign, Bach told voters he was the only candidate with a track record of attracting and retaining jobs through his work with the Greater Colorado Springs Chamber of Commerce and the Economic Development Corp.

Bach is poised to lead Colorado Springs through a historic transition to a new form of government that gives the mayor broad powers over hiring and firing city workers and authority over the city’s $200 million-plus general fund budget. The full-time position pays about $96,000.

“Hiring a chief of staff is paramount,” he said.

Bob Loevy, a political science professor at Colorado College, said Bach will have the “privilege and opportunity” to be the city’s first strong mayor. But he’ll have to “bear the burden” as well.

“He is going to set many precedents about how the new strong mayor of Colorado Springs will operate,” he said. “The charter description of the job is a very brief one. All kinds of questions will come up where he won’t have the example of a strong mayor in the past to tell him what to do.”

Mayor Lionel Rivera said he has already scheduled a meeting with the next mayor to talk about the transition to a strong-mayor form of government. He also has set up meetings for the next mayor to meet with the top brass at the city’s military installations.“I’ve told him I’m available any time he’d like any advice,” Rivera said.

Rivera noted that several high-ranking department positions have not been filled and suggested that Bach may want to consolidate duties. During the campaign, Bach promised “a top-to-bottom review of all city operations.”

“He needs to look, ‘Do I really need a public works director?’” Rivera said.

Buddy Gilmore, a defense contractor who endorsed Bach in the runoff election after finishing sixth among eight candidates in April, said Bach has his work cut out for him.“Steve now becomes the face of our city,” Gilmore said. “He faces tremendous challenges. Our city’s destiny is challenged by the struggling economy. We also face a growing pension issue and the endless debate on the size and role of government.”

Loevy said “the nature of the community” was a large factor in Bach’s win.

“It’s basically a conservative community,” Loevy said. “Although it was a nonpartisan election, everyone knows that Colorado Springs is the most Republican city in Colorado in terms of the numbers of Republican voters that live and vote here.”

Loevy also said the Bach campaign and his supporters, including Americans for Prosperity, which spent about $100,000 on television and radio ads in the weeks leading up to the runoff election, painted Skorman as a liberal.

“Although he’s not a registered Democrat, that portrayed him to most voters as on the left and tending in the direction of the Democratic Party,” Loevy said.

“I think Bach simply ran a better campaign,” he added. “I thought both his television ads and the ads that were run on his behalf by outside interests, which severely tarnished Richard Skorman’s image — not his personal image but his political image — I thought they were very effective.”

“I think I had to overcome such a barrage of ‘Richard Skorman is liberal’ ads,” he said.

“In this city, being liberal is poison. I didn’t know how to speak against it. I can tell people all day long I’m a fiscal conservative, that I’m not unionizing city employees or for big government. But all the untruths were out there.”