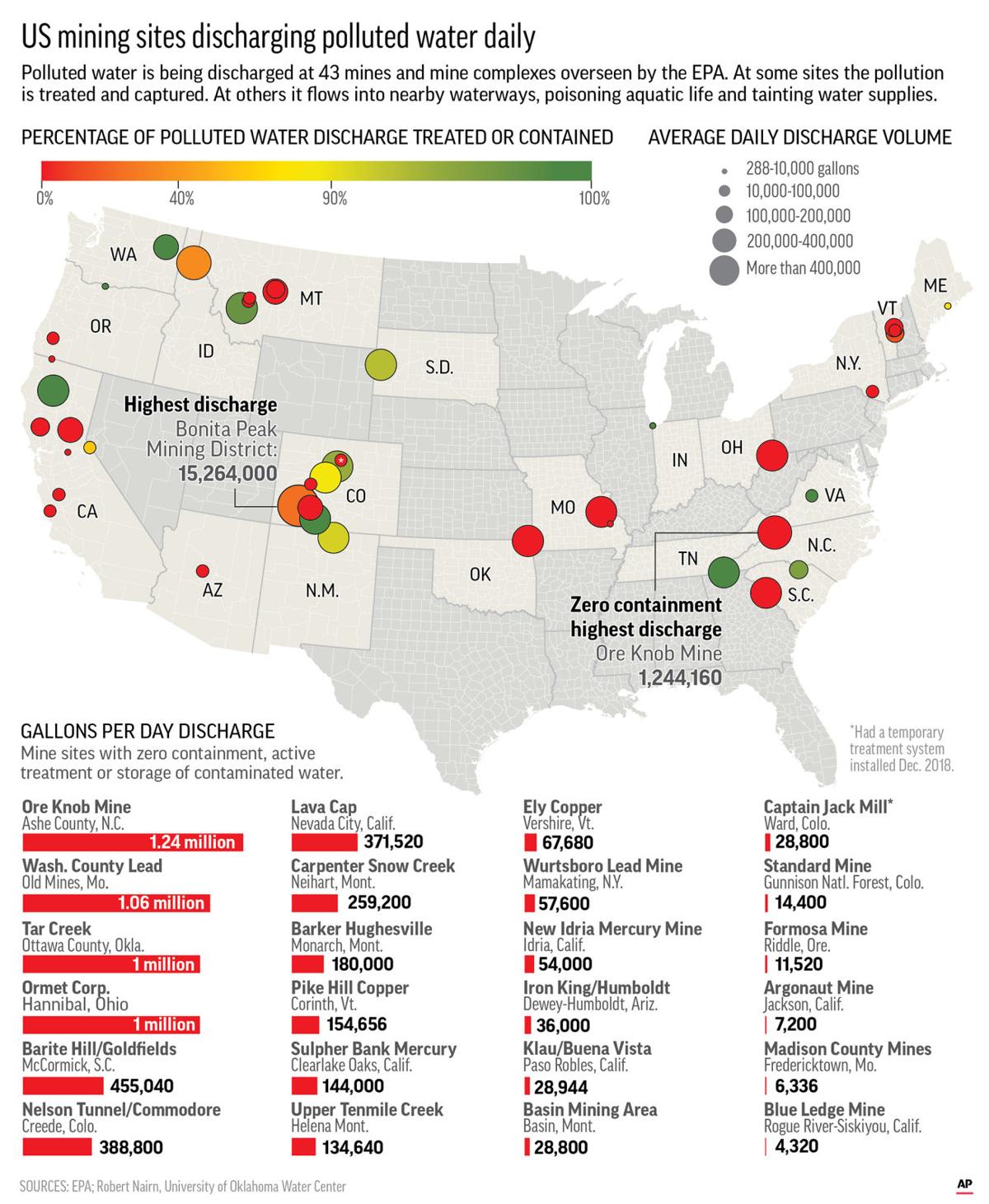 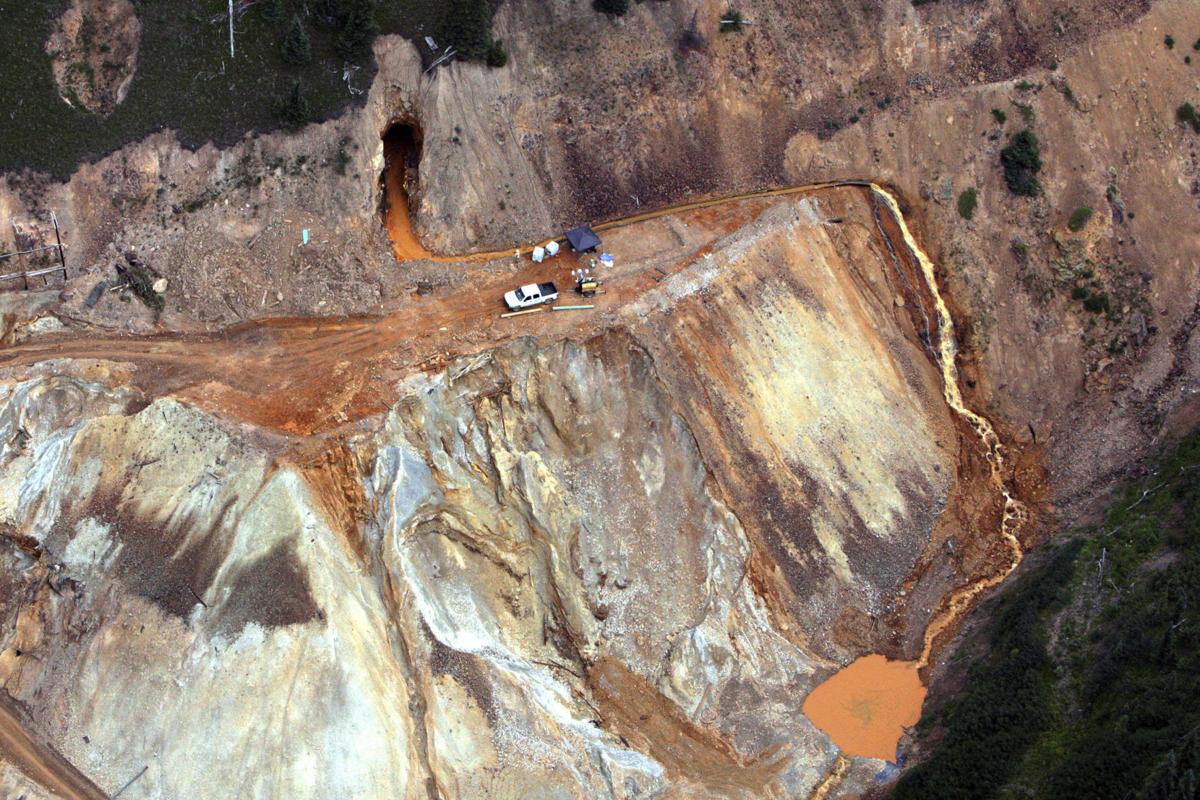 In this Aug. 11, 2015 aerial photo, wastewater streams out of the Gold King mine in southwestern Colorado after a contractor crew led by the Environmental Protection Agency inadvertently triggered the release of about 3 million gallons of water tainted with heavy metals. Federal officials fear that at least six of the sites examined by The Associated Press could have blowouts like the one at Gold King. 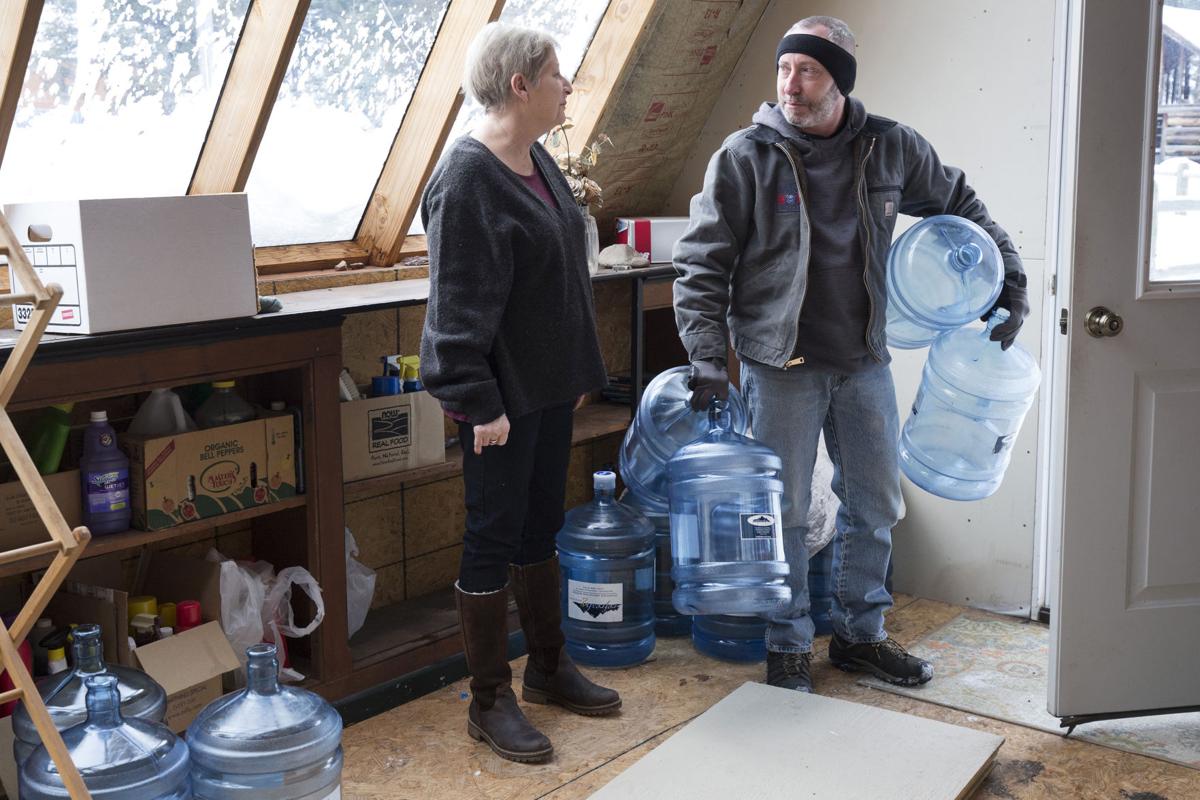 Catherine Maynard, a natural resource analyst for the U.S. Department of Agriculture, receives a bottled water delivery at her home in Rimini, Mont., by Bart Young of Big Spring Water on Feb. 18, 2019. About 30 households can’t drink their tap water because groundwater was polluted by about 150 abandoned gold, lead and copper mines that operated from the 1870s until 1953. (AP Photo/Janie Osborne)

In this Aug. 11, 2015 aerial photo, wastewater streams out of the Gold King mine in southwestern Colorado after a contractor crew led by the Environmental Protection Agency inadvertently triggered the release of about 3 million gallons of water tainted with heavy metals. Federal officials fear that at least six of the sites examined by The Associated Press could have blowouts like the one at Gold King.

Catherine Maynard, a natural resource analyst for the U.S. Department of Agriculture, receives a bottled water delivery at her home in Rimini, Mont., by Bart Young of Big Spring Water on Feb. 18, 2019. About 30 households can’t drink their tap water because groundwater was polluted by about 150 abandoned gold, lead and copper mines that operated from the 1870s until 1953. (AP Photo/Janie Osborne)

RIMINI, Mont. • Every day, many millions of gallons of water loaded with arsenic, lead and other toxic metals flow from some of the most contaminated mining sites in the U.S. and into surrounding streams and ponds without being treated, The Associated Press has found.

That torrent is poisoning aquatic life and tainting drinking water sources in Colorado, Montana, California, Oklahoma and at least five other states.

The pollution is a legacy of how the mining industry was allowed to operate in the U.S. for more than a century. Companies that built mines for silver, lead, gold and other “hardrock” minerals could move on once they were no longer profitable, leaving behind tainted water that still leaks out of the mines or is cleaned up at taxpayer expense.

Using data from public records requests and independent researchers, the AP examined 43 mining sites under federal oversight, some containing dozens or even hundreds of individual mines.

The records show that at average flows, more than 50 million gallons of contaminated wastewater streams daily from the sites. In many cases, it runs untreated into nearby groundwater, rivers and ponds — a roughly 20 million-gallon daily dose of pollution that could fill more than 2,000 tanker trucks.

The remainder of the waste is captured or treated in a costly effort that will need to carry on indefinitely, often with little hope for reimbursement.

The volumes vastly exceed the release from Colorado’s Gold King Mine disaster in 2015, when a U.S. Environmental Protection Agency cleanup crew inadvertently triggered the release of 3 million gallons of mustard-colored mine sludge, fouling rivers in three states.

At many mines, the pollution has continued decades after their enlistment in the federal Superfund cleanup program for the nation’s most hazardous sites, which faces sharp cuts under President Donald Trump.

Federal officials have raised fears that at least six of the sites examined by AP could have blowouts like the one at Gold King.

Some sites feature massive piles or impoundments of mine waste known as tailings. A tailings dam collapse in Brazil last month killed at least 169 people and left 140 missing. A similar 2014 accident in British Columbia swept millions of cubic yards of contaminated mud into a nearby lake, resulting in one of Canada’s worst environmental disasters.

But even short of a calamitous accident, many mines pose the chronic problem of relentless pollution.

In mountains outside the Montana capital of Helena, about 30 households can’t drink their tap water because groundwater was polluted by about 150 abandoned gold, lead and copper mines that operated from the 1870s until 1953.

The community of Rimini was added to the Superfund list in 1999. Contaminated soil in residents’ yards was replaced, and the EPA has provided bottled water for a decade. But polluted water still pours from the mines and into Upper Tenmile Creek.

“The fact that bottled water is provided is great,” said 30-year Rimini resident Catherine Maynard, a natural resources analyst for the U.S. Department of Agriculture. “Where it falls short is it’s not piped into our home. Water that’s piped into our home is still contaminated water. Washing dishes and bathing — that metal-laden water is still running through our pipes.”

Estimates of the number of such abandoned mine sites range from 161,000 in 12 western states to as many as 500,000 nationwide. At least 33,000 have degraded the environment, according to the Government Accountability Office, and thousands more are discovered every year.

Officials have yet to complete work including basic risk analyses on about 80 percent of abandoned mining sites on federal lands. Most are controlled by the Bureau of Land Management, which under Trump is seeking to consolidate mine cleanups with another program and cut their combined 2019 spending from $35 million to $13 million.

Problems at some sites are intractable. Among them:

• In Colorado’s San Juan Mountains, site of the Gold King blowout, some 400 abandoned or inactive mine sites contribute an estimated 15 million gallons of acid mine drainage per day.

• In eastern Oklahoma’s Tar Creek mining district, waterways are devoid of life and elevated lead levels persist in the blood of children despite a two-decade effort to clean up lead and zinc mines. More than $300 million has been committed since 1983, but only a small fraction of the impacted land has been reclaimed and contaminated water continues to flow.

• At northern California’s Iron Mountain Mine, cleanup teams battle to contain highly acidic water that percolates through a former copper and zinc mine and drains into a Sacramento River tributary. The mine discharged six tons of toxic sludge daily before an EPA cleanup. Authorities now spend $5 million a year to remove poisonous sludge that had caused massive fish kills, and they expect to keep at it forever.

This landscape of polluted sites occurred under mining industry rules largely unchanged since the 1872 Mining Act.

State and federal laws in recent decades have held companies more accountable than in the past, but critics say huge loopholes all but ensure that some of today’s mines will foul waterways or require perpetual cleanups.

To avoid a catastrophe like Gold King, EPA officials now require advance approval for work on many mining sites. But they acknowledge they’re only dealing with a small portion of the problem.

“We have been trying to play a very careful game of prioritization,” said Dana Stalcup, deputy director of the Superfund program. “We know the Superfund program is not the answer to the hundreds of thousands of mines out there, but the mines we are working on we want to do them the best we can.”

The 43 sites examined by AP are mining locations for which officials and researchers have reliable estimates of polluted water releases. Officials said flow rates at the sites vary.

Average flows were unavailable for nine sites that only had high and low estimates of how much polluted water flowed out. For those sites, the AP used the lower estimates for its analysis.

To date, the EPA has spent an estimated $4 billion on mining cleanups. Under Trump, the agency has identified a small number of Superfund sites for heightened attention after cleanup efforts stalled or dragged on for years. They include five mining sites examined by AP.

Former EPA assistant administrator Mathy Stanislaus said more money is needed to address mining pollution on a systematic basis, rather than jumping from one emergency response to another.

“The piecemeal approach is just not working,” said Stanislaus, who oversaw the Superfund program for almost eight years ending in 2017.

Democrats have sought unsuccessfully to create a special cleanup fund for old hardrock mine sites, with fees paid by the mining industry. Such a fund has been in place for coal mines since 1977, with more than $11 billion in fees collected and hundreds of sites reclaimed.

The mining industry has resisted doing the same for hardrock mines, and Republicans in Congress have blocked the Democratic proposals.

Montana Mining Association director Tammy Johnson acknowledged abandoned mines have left a legacy of pollution, but added that companies still in operation should not be forced to pay for those problems.

“Back in the day there really wasn’t a lot known about acid mine drainage,” she said. “I just don’t think that today’s companies bear the responsibility.”

In 2017, the EPA proposed requiring companies still operating mines to post cleanup bonds or offer other financial assurances so taxpayers don’t end up footing cleanup bills. The Trump administration halted the rule, but environmental groups are scheduled to appear in federal court next month in a lawsuit that seeks to revive it.

“When something gets on a Superfund site, that doesn’t mean it instantly and magically gets cleaned up,” said Earthjustice attorney Amanda Goodin. “Having money immediately available from a responsible party would be a game changer.”