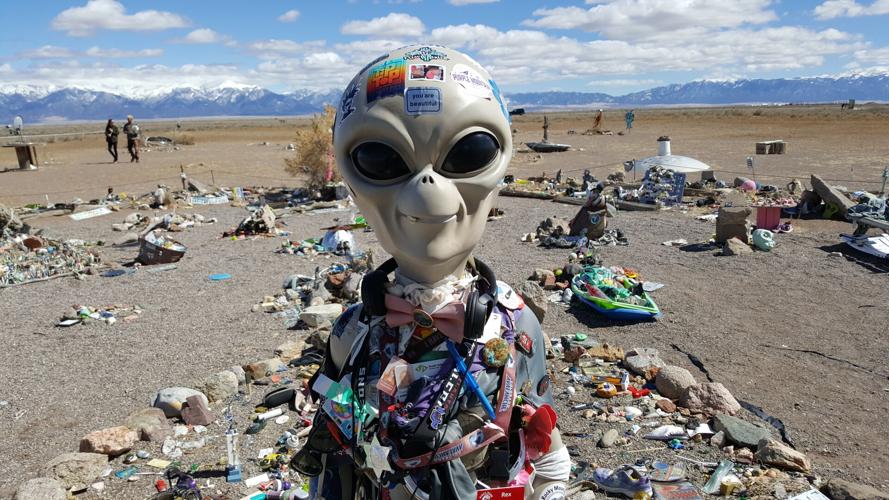 An alien statue overlooks a vortex field at the UFO Watchtower. 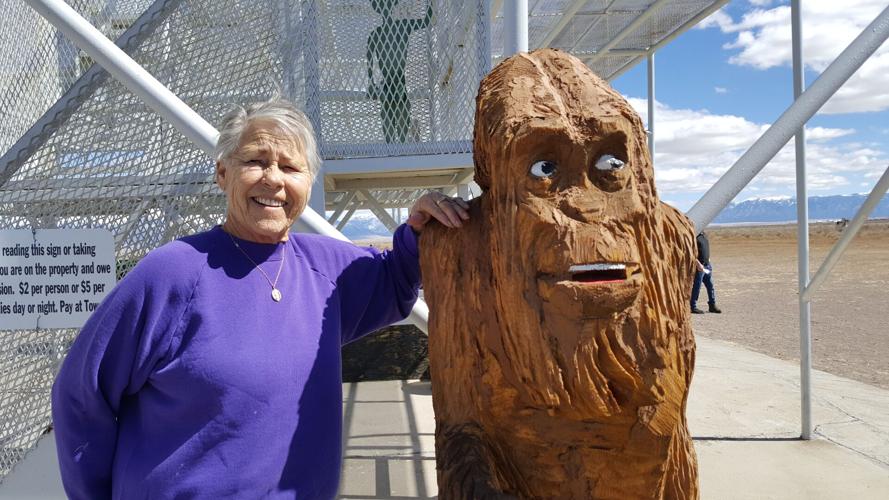 Judy Messoline poses with friend at the UFO Watchtower with the statue of an alien in the background. (Photo by David Ramsey) 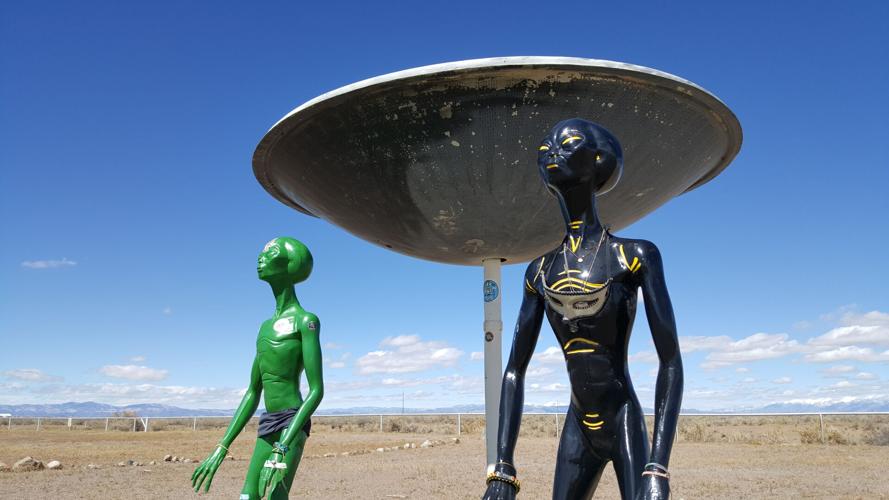 An alien statue overlooks a vortex field at the UFO Watchtower.

Judy Messoline poses with friend at the UFO Watchtower with the statue of an alien in the background. (Photo by David Ramsey)

HOOPER – You will not meet aliens when you visit the UFO Watchtower.

You almost certainly will meet Americans who believe in aliens.

Those alien-believing Americans will show you video and tell stories and gently (I hope) seek to persuade you aliens are genuine and walk among us from time to time.

Driving to Great Sand Dunes National Park? The Watchtower, only 35 miles west of the Dunes, is a fun side trip.

For years, I drove past the exit for the Watchtower, but a visit with Sarah Scoles, a Denver author, inspired me to take this detour to zany fun. Scoles wrote “They Are Already Here, UFO Culture and Why We See Saucers,” a book that examines what she sees as a New Age faith in the existence of aliens.

Scoles is not a believer in UFOs, but enjoys talking with believers. Want to expand your horizons? Want to escape your sometimes tedious existence? Try listening, Scoles says.

“For me, it’s exciting to see the excitement of other people,” she says. “I’m interested in what makes other people tick and if that’s UFOs, that’s cool with me.

“If people know you’re being dismissive, they won’t tell you all kinds of things because they know you don’t agree with them, so you just will know the thoughts of those who agree with you.

“I would rather know what people think even if I don’t agree with them.”

Scoles spent months respectfully listening to Americans tell UFO tales. The result was a meaningful book about a hidden sliver of America.

I arrived at the Watchtower with determination to follow Sarah’s advice. I was not a believer and knew I would not become a believer, but I would politely listen to believers.

The Watchtower was created by Judy Messoline, who failed in her attempt to raise cattle in this especially inhospitable-to-cattle slice of the San Luis Valley. Instead, she opened a campsite and a modest viewing platform in 2000. She created an intriguing slice of roadside Americana that you can visit for $2 a person or $5 a carload.

The setting is gorgeous. The scenic route from Colorado Springs to the Watchtower goes through Salida, and the straight road along Route 285 and 17 hugs the mountains while delivering spectacular views. It’s a peaceful, beautiful ride.

For some reason, I declined to make a request during my visit.

But a request was not my purpose. I wanted to meet a believer in aliens. I wanted to talk with someone who sees visitors from different planets in our night skies.

I leaned close to her phone and watched blurry images of lights approaching on the night horizon. The images were obviously - in my view - of everyday, see-them-once-an-hour jet aircraft.

But, remembering Sarah’s advice, I said nothing.

Aliens move among us, Cynthia said in a soft, slurred voice.

A German couple listened intently as they looked at her phone. Judy leaned over for a quick look.

Meanwhile, I gazed at open skies on a brilliantly bright day.

Nothing strange was approaching.

Ellen and Larry Booth still wonder what landed on their family property in La Veta in 1992. A UFO? Maybe, they say.