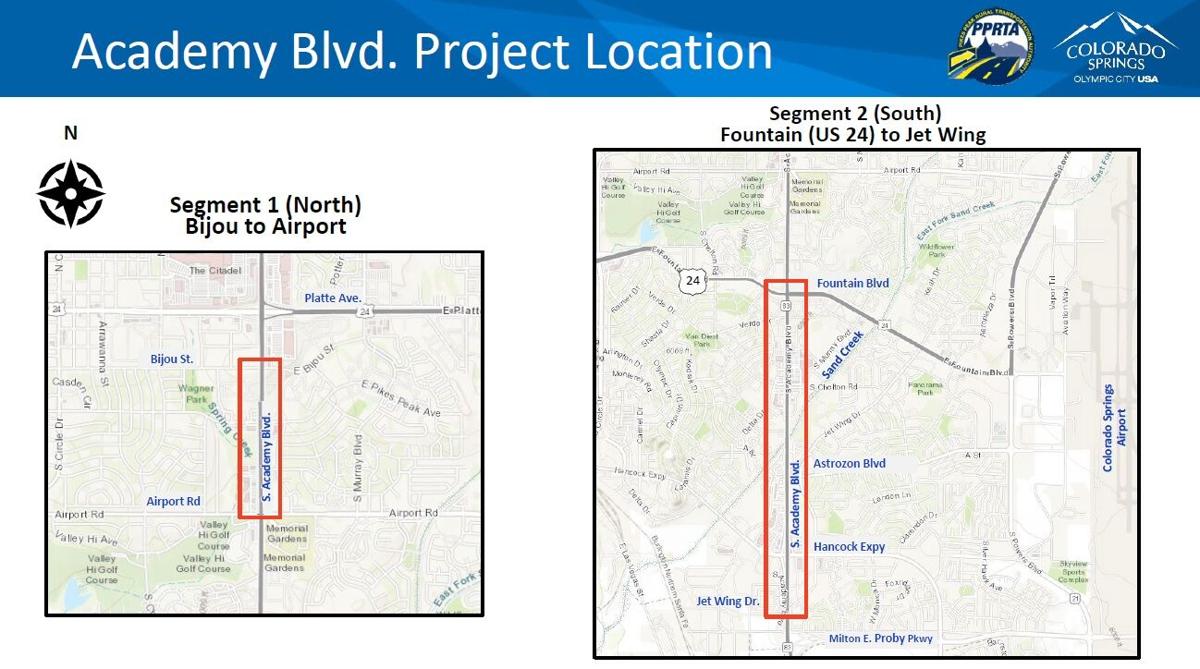 A map shows the locations on South Academy Boulevard that crews will improve.

A map shows the locations on South Academy Boulevard that crews will improve.

Construction crews are to begin fixing aging and deteriorating portions of South Academy Boulevard on Colorado Springs’ southeast side by the end of the year in an effort to improve safety and pedestrian accessibility along the major corridor, project officials said.

The $36 million voter-approved Pikes Peak Rural Transportation Authority project will repair 18 "lane miles" of cracked and pothole-ridden asphalt, replace old curbs and gutters, and build a storm sewer system along Academy Boulevard from East Bijou Street to Airport Road, and from East Fountain Boulevard to Jet Wing Drive, city project manager Robin Allen said. A lane mile is a standard highway construction measure and is the equivalent of one mile of a single lane.

“Part of the reason the pavement is failing is because stormwater isn’t being conveyed correctly to keep it from pooling,” Allen said. “When you have standing water like that, it’s not good for the pavement.”

The new system will more effectively move stormwater away from the road to prevent puddling on the asphalt, she said.

The project will also add a new pedestrian trail on the east side of Academy and fill in gaps on missing sidewalks on the west side of the corridor to create a continuous pedestrian path.

“One of our goals for the project was that we really wanted to implement better connectivity for pedestrians,” Allen said.

Crews will complete upgrades in two separate construction phases. In the first phase, to begin later this year, crews will reconstruct South Academy Boulevard from East Bijou Street to Airport Road. The cost for that phase is about $9.5 million, a city news release states, but could be about $12 million with added utility work, Allen said.

The second phase, which will reconstruct Academy between East Fountain Boulevard and Jet Wing Drive, is to begin in summer 2022.

Residents can learn more about the project, construction impacts and design recommendations, and can submit comments and questions during an in-person open house scheduled from 5 to 6:45 p.m. on Thursday at the Sand Creek Library, 1821 S. Academy Blvd.

Officials won’t formally present the project during the open house, the release states. Residents can drop by any time during open house hours. Display boards will be available at the library beginning Tuesday.

Bridge work to close portion of I-25 overnight