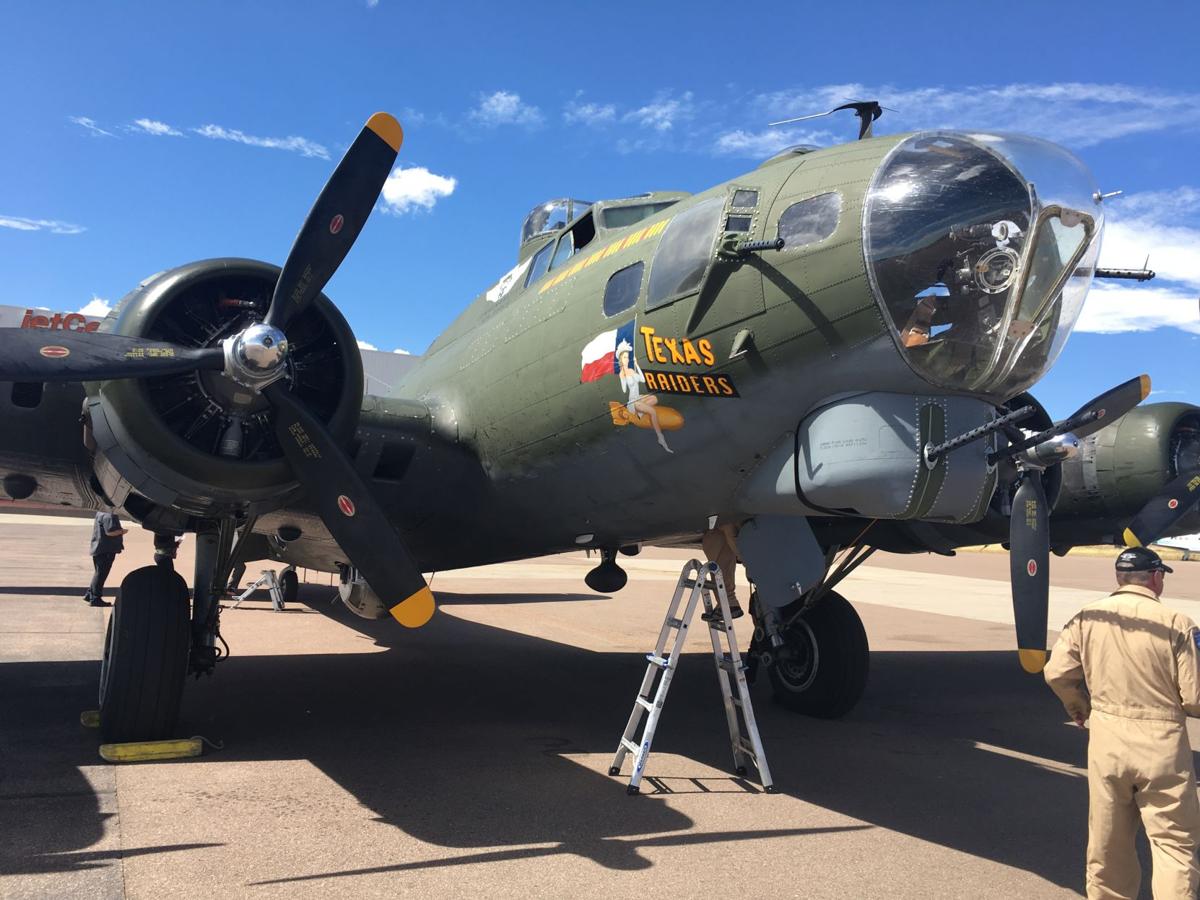 A B-17 “Flying Fortress” gets ready for takeoff at the Colorado Jet Center in Colorado Springs on Friday. 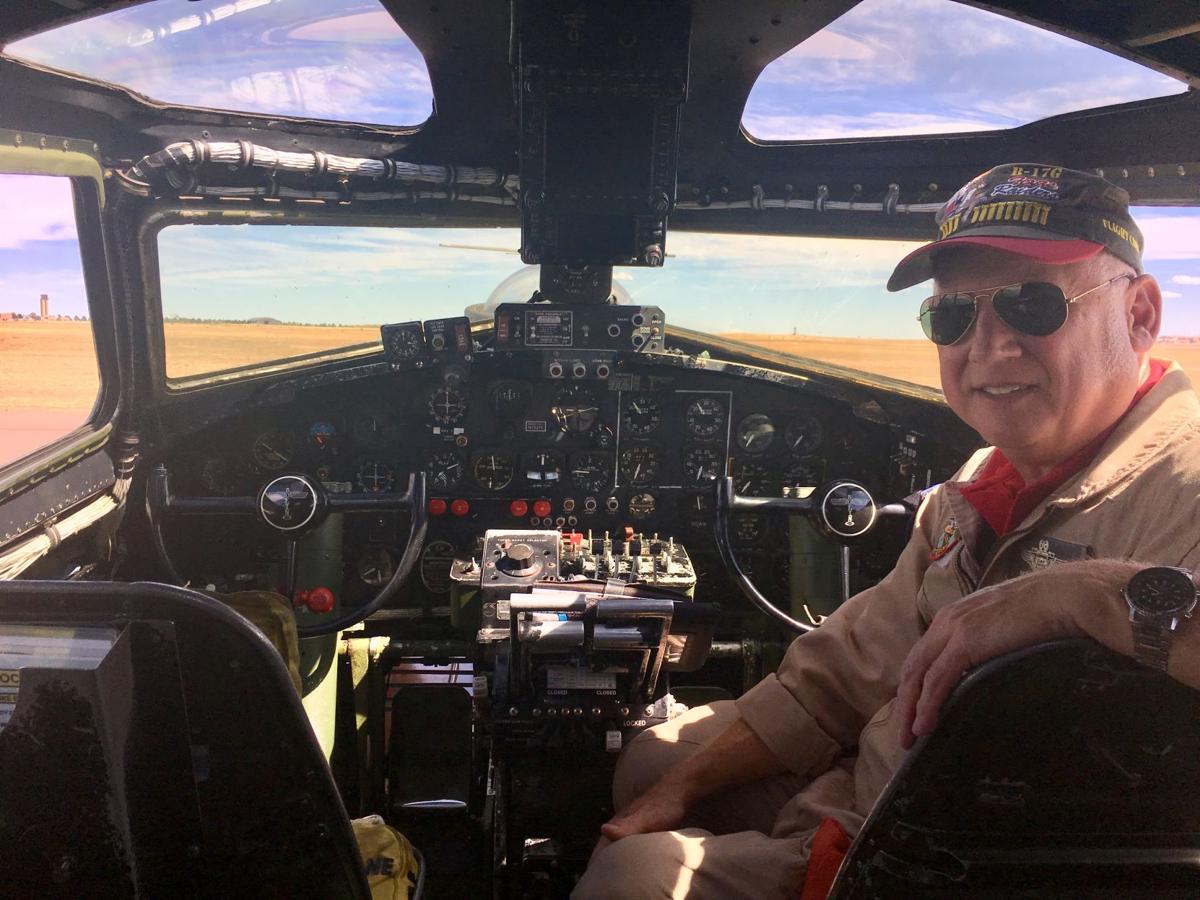 Pilot John Bixby in the cockpit of the B-17 on Friday in Colorado Springs. Bixby said flying the bomber was a bit like piloting a house.

It’s kind of an aluminum rhapsody.

It’s the legendary B-17, and damn if I didn’t get to ride one Friday.

Our host on the flight was Nick “Prop Wash” Smith, the loadmaster, which means he’s, well, master of the load. And Friday, seven of us passengers, including the editor and publisher of the Gazette, were the load. Our pilot was John Bixby, who said flying a B-17 was a bit like piloting a house. “Light in pitch, heavy in roll, but you gotta use what you got. It takes both hands to turn. It’s not harmonized, it’s really weird.”

I have no idea what that means, but God I love that kinda talk.

A gust came up that rattled the old bird’s aluminum timbers, and a crew member added that “It’s a big weather vane when it comes to hard wind like that.”

The dominant experience once inside is the growl of those motors, which require earplugs and gritted teeth

The thing felt a bit like a rattletrap when it started up, and it made you wonder how it was going to ever get off the ground. We were only doing about 75 mph when it lumbered into the sky, and all I could think was how in the world was 20 tons of aluminum built 75 years ago actually going to stay aloft at that speed.

Going up in one of these babies is a little like bouncing on a trampoline while encased in metal, a lot of jostling up and down in close quarters, with that catch in your stomach at every wind gust. No, it couldn’t have been very easy to fly during actual war, especially with a full complement of bombs over Germany and a swarm of Messerschmitts trying to obliterate you.

When the first one took off from Boeing Field outside Seattle on July 28, 1935, it was the largest land-based plane in the world. A Seattle Times reporter on hand for the first flight gave it a nickname that stuck, exclaiming, “it’s a flying fortress.”

The B-17 was the Muhammad Ali of bombers, legendary for its ability to take a punch. The plane could sustain heavy damage in battle and keep on flying, bombing and strafing. It soon became WWII fliers’ favorite craft.

It was used in every theater of war, but mainly employed for precision bombing of German military and industrial targets.

The B-17 reached its lethal pinnacle in February 1945 in a 1,000-bomber raid on Berlin, followed by the deadly Dresden raid that triggered a massive firestorm that swept the city and caused Kurt Vonnegut to write “ Slaughterhouse Five.”

During our ride 75 years later, a young cameraman in back got a little airsick, and it made our publisher marvel afterwards at the young men of World War II, probably about the age of that cameraman, who had to ride out antiaircraft fire, freezing temperatures, cramped, crowded fuselages, fighters trying to shoot them down, evasive maneuvering that quintupled the turbulence, all the while battling their own airsickness as well.

The sheer mechanical audacity of the B-17 is a testament to the industrial miracle that changed America from a country with the world’s 39th largest army to the world’s preeminent superpower in just a few years.

All those planes and tanks and ships it built during the war years are what really made the difference between Allied armies and Axis ones.

At one point, the Ford plant at Willow Run churned out a B-24 Liberator bomber every 63 minutes.

Only nine of those are left today, including the one we flew in Friday.

During that flight on Friday I was thinking of my grandfather, a master sergeant in the Army during World War II, who loved planes all his life. He’d take us grandkids out to Stapleton Field when we were very young and park us near the end of a runway just to watch the planes land and take off.

He was a lot like that B-17, built tough, not a lot of frills, resilient as tensile steel. The contrast between his hard life of sacrifice and blood brotherhood and my easy life of iPhones and Starbucks made me think, during that flight, of that last scene in “Saving Private Ryan” when the old dying soldier says to the young one he’s just saved, “Earn This.”

Taking off in a WWII-vintage mechanical marvel reminds you inevitably of when our country took flight itself, in other words, the world’s dreams of freedom carried forward at a critical moment in history by steely souls like my grandfather.

It flew across the Pacific in World War II, and was scrapped and buried in Papua New Guinea afterward — but the Lockheed P-38 Lightning landed…