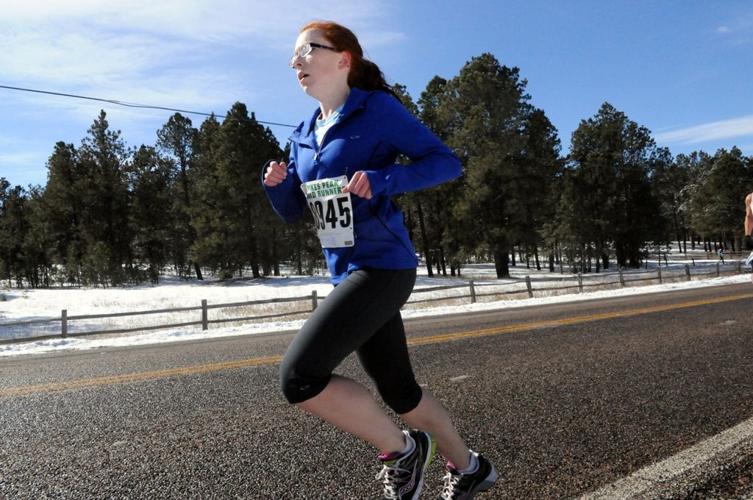 Darby Spence Photo by JEFF KEARNEY, FOR THE GAZETTE 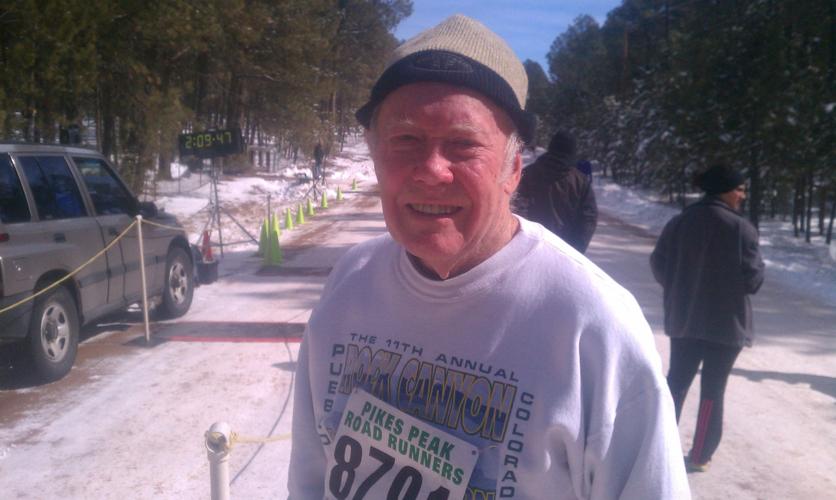 Darby Spence Photo by JEFF KEARNEY, FOR THE GAZETTE

Eighty-two-year-old Ed Mighell was beginning to catch his breath at the finish line Saturday morning after the Pikes Peak Road Runners Winter Series 10K at Black Forest when a fellow runner gave him a quick pat on the back.

“Ed, you are a tiger,” the woman said in amazement before walking away.

Mighell, a 20-year veteran of the 34-year Winter Series, just smiled and said thank you after finishing the series’ fourth and final short race (10K) in 1 hour, 40 minutes, 27 seconds by sprinting down the final stretch with a burst of youthfulness.

“Smilin Ed” did not seem too tired and he certainly did not appear cold despite running in 14-degree weather.

So what was going through Mighell’s mind as he made his way up and down the snow-packed and icy 6.2-mile course?

“The fact that I can still do it,” Mighell laughed. “It has gotten tougher. I used to always do the long series, but three years ago I switched over to the short series.”

It was just another sense of accomplishment for one of the Winter Series’ oldest, yet most welcoming runners. Saturday was the final race of the four-race Winter Series in four city and county locations.

The Denver native grew up in Maryland before running the 1- and 2-mile races for Bucknell University. Mighell moved to Denver 40 years ago and still enjoys the sense of accomplishment that he gets when he finally crosses the finish line.

Even more so, it is the running community that keeps bringing this veteran back to the races.

“You build camaraderie with the other runners and you get to know some people very well,” Mighell said. “You meet them time and time again at the races.”

Mighell remembers running in some of the Winter Series’ toughest conditions over the years but one of his fondest memories is when he ran the Boston Marathon in 1990. He was 60.

“The race I remember the most is the Boston Marathon,” Mighell said. “It was awesome. There were people cheering me on the entire race and I have never seen that in a race before.”

Winter Series co-race director John Gardner is in awe at how Mighell, who runs three miles a day, can still do it.

“It is inspiring. It is so cool to see him,” Gardner said. “It looks like he is having a good time and enjoying himself. I hope I am blessed and fortunate enough to run that long.”

Fellow race director Michael Shafai said it is always humbling to see the variety of ages in the Winter Series.  There are racers as young as 5.

Yet there aren’t too many left to compete with Mighell in his bracket.

“Ed’s great. He has competed every year and always wins his age group because he is the only one who shows up,” Shafai laughed.

Mighell is not done though. He leaves April 2 with his 57-year-old son, Ed Jr., for Spain where father and son plan on backpacking 500 miles.

“He and his wife were vacationing in Spain last year and he saw this trail and had a tremendous urge to hike it,” Mighell said with a smile. “Quite a few people were interested, but I am the only one that came through.”

“It’s exciting. It’s the first year I decided to do all four races and it was a lot of fun,” Burns said. “I’m not a fan of running in snow, but it is the Winter Series so it’s only right to have at least one race with some snow.”

Air Academy track star Katie Rainsberger took first on the women’s side in 41:43 to clinch the women’s short overall title two days before the outdoor track season gets under way.

“I came here to build up a base for track and do as well as I could,” Rainsberger said. “This year my goal was to try and finish all four races and see how well I could do.”