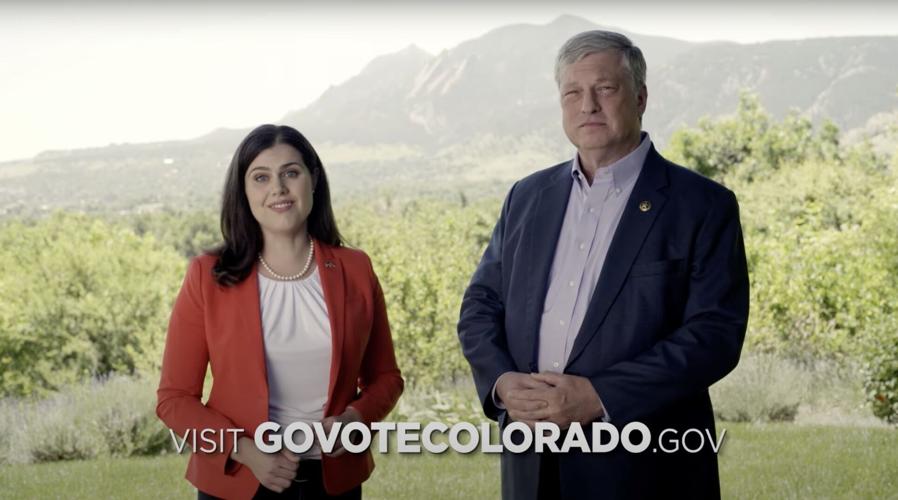 Secretary of State Jena Griswold, a Democrat, and former Secretary of State Wayne Williams, a Republican, appear in a public service ad urging residents to seek out trusted sources of information about election security.

Secretary of State Jena Griswold, a Democrat, and former Secretary of State Wayne Williams, a Republican, appear in a public service ad urging residents to seek out trusted sources of information about election security.

Organizer John Pitchford said Williams' recent appearance in a public service announcement about the security of elections with Secretary of State Jena Griswold was the "tipping point" that prompted the recall effort. Williams is running for mayor of Colorado Springs in April and the group does not want to see him gain the seat given his record, Pitchford said.

"So far we are getting good response. ... I anticipate a lot of support for this movement," said Pitchford about the effort that sent out emails asking for donations and volunteers Thursday. The campaign is in the petition collection phase.

The public service announcement that stopped running this week was criticized for using just over $1 million in federal election assistance funds to air 15- and 30-second versions of the ads statewide for two weeks on broadcast, cable and streaming platforms, Colorado Politics previously reported. Williams, a former Republican secretary of state, appeared with Griswold in the ads aimed at promoting trust in the elections process. Griswold, a Democrat, beat Williams in the race for the statewide seat in 2018.

Williams also has faced criticism for voting to reduce the amount of parkland developers must give to the city when they build new homes; for opposing an effort known as Protect our Park that would require a vote of the people to approve parkland deals; and for supporting Fortune's appointment to City Council.

Kent Obee, who worked on the Protect our Parks campaign, said Williams' backing of a question that would have required a supermajority of council to approve parkland sales and swaps instead of a vote of the people was clearly obstructionist.

"There are number of us who have not seen Wayne as a protector of the things we think are important," he said.

While the Protect our Parks question was victorious through a vote of the people, reducing the amount of parkland developers must give to the city, a council decision was "a big giveaway," Obee said.

Judith Rice Jones, a longtime parks advocate, described the parks ordinance as an asset for the city as it has struggled to keep up with providing enough parks for the rapidly growing population.

"The only people who didn’t see it working were the developers," she said.

Fortune moved into District 3, the southwest sector of town, late last year shortly before Richard Skorman left the seat in December. Pitchford also said Williams has improperly treated local Republican Party Chairwoman Vickie Tonkins, particularly in an effort to set up a new committee to handle finances. The local party has been embroiled in infighting for years and both Pitchford and Williams have been involved in those disputes.

Some residents were concerned about Fortune's appointment initially because of her short time in the district before she was appointed. Fortune also never met with or engaged with residents concerned about long evacuation times in the case of a wildfire, said Dana Duggan, a co-founder of Westside Watch who advocated for evacuation modeling, among other steps. Fortune, along with all the other councilmembers, voted for an ordinance that did not incorporate any suggestions from the neighborhood.

"She supported the city agenda over her constituents," Duggan said.

Williams criticized the recall effort, saying it would trigger a special election and that it is unnecessary because the voters can have their say in the April election. Fortune's seat will be on the ballot, because she was appointed to fill out Skorman's term and Williams is leaving his seat to run for mayor.

To trigger a recall of Williams, about 24,056 signatures would be required, and in the recall of Fortune, 4,000 signatures would be required, based on the requirements listed in the city charter. The charter requires petitioners to collect 25% of the votes cast in the last mayoral election to recall an at-large member and 25% of the votes cast in the last election for the same council seat.

Those involved in the campaign have 60 days to collect the needed signatures.

The candidates who could face a recall have five days to resign if enough verified signatures have been collected before the city holds a special election, between 30 to 60 days after all the signatures are filed.

Williams explained his appearance alongside Griswold, saying it was an opportunity to build confidence in the election process. It was not an endorsement of Griswold, and he asked the Secretary of State's Office for the ads to stop running a month before the election. Correspondence between Williams and the Secretary of State's Office showed he agreed to appear on television as part of the campaign.

The Secretary of State's Office made the decision to air the ads after the primary ended, and he did not know how frequently the ads would run, Williams said.

He also defended Fortune's appointment, saying she has done a good job on citywide and local issues in her district. Fortune worked with neighbors on a long-term solution for the management of the Westside Community Center.

She has also been working on issues related to homeless residents in public spaces, because residents have been calling her about that issue. She is interested in solutions that could be funded in part through the state or settlement funds from businesses that sold opioids that will be flowing into the county.

She said she has not decided whether she will run to represent District 3 in April or whether she would work on an anti-recall campaign.

More information about the recall effort and how to get involved can be found at integritymatterscos.org.