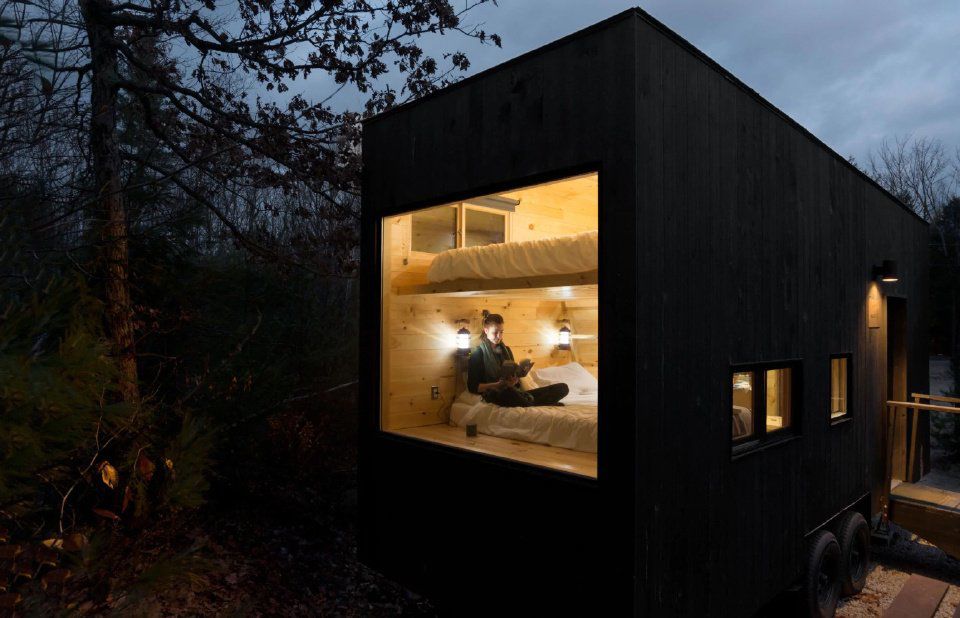 Getaway markets its tiny homes in the woods as a way to “rediscover the pleasure of boredom, solitude and unstructured time.” (Getaway) 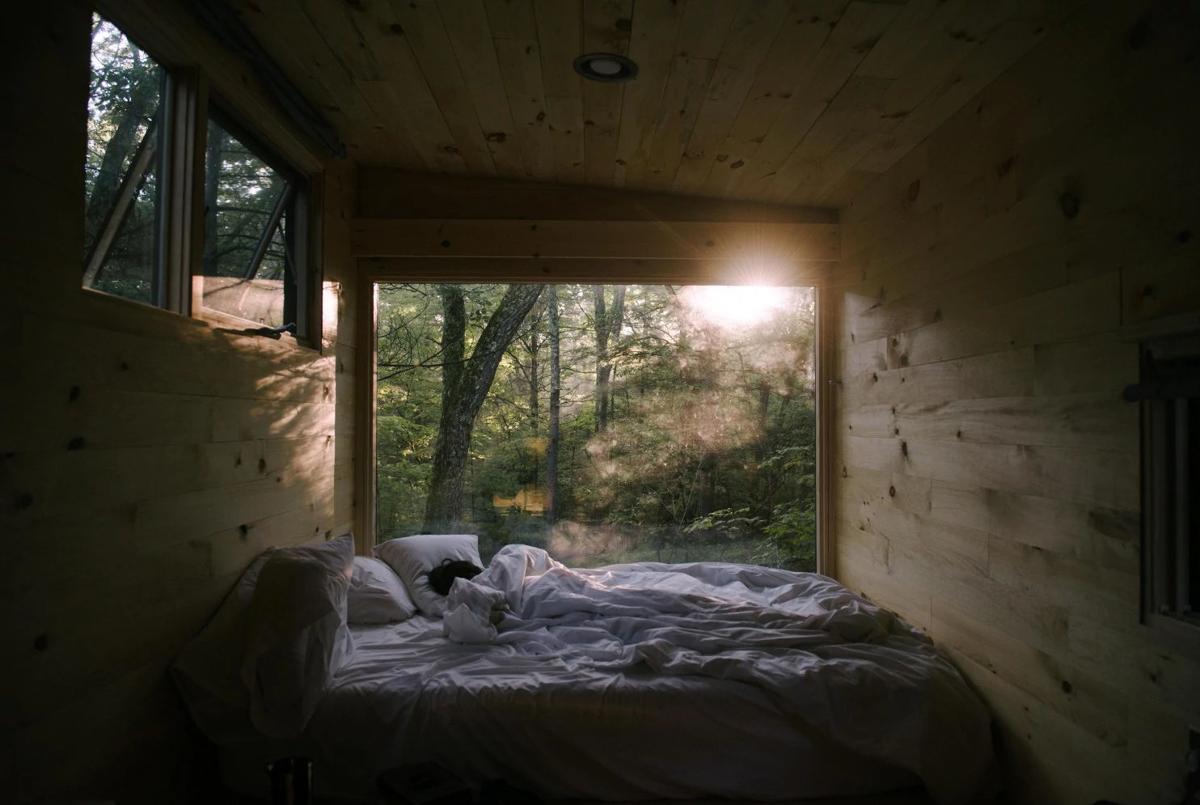 Sleep is one of the subtle messages in Getway’s marketing materials. (Getaway)

To commune with ourselves, we must trek two hours to Stanardsville, a town on the edge of Virginia’s Blue Ridge Mountains whose population has stairstepped down over the years to 384 people, a country store and this wooded plot, which, before 20 tiny houses arrived this fall, was an RV campground called Heavenly Acres.

The heavenly part is debatable. On the second official day of winter, the tract is a colorless bog, surrounded by tall, barren trees and covered with a blanket of dead leaves. But this, promises Getaway — a start-up that offers these rental not-cabins and this not-camping not far from major cities — is where we may rejuvenate our very souls.

As our car crunches up the gravel driveway, we pass an ominous charcoal-gray box on wheels. A sign proclaims it “Lenore.” It is a carbon copy of Lillian, Hank, Felix and Shirley, which is the tiny house we have been assigned, we learn in a succinct text from the company that also feeds us an entry code.

But Lenore sends the first ripple of excitement through the car. Tinys have a way of doing that.

In Getaway’s soft, wooded marketing photos, tinys such as Lenore are imbued with symbolism. Inside, couples slice avocados together. A multiethnic gaggle of cool kids in beanies convenes at a fire pit. Young women plant themselves in large picture windows overlooking the forest with hardcover books you can only assume are by Zadie Smith or Audre Lorde. In one image, a woman simply contorts herself in a display of yogic bliss.

The savvy emphasis on escape and disconnectedness and repose has resonated among the millennials Getaway aims to reach. In each of its markets, outside New York, Boston and Washington, Getaway’s houses are booked solid on weekends, and in early 2017, the company, founded by two Harvard graduates, raised $15 million in venture capital funding, which suggests that a tiny house campground may soon be coming to a forest near you.

Despite its name, Getaway does not sell the sort of wild weekend vacation you might experience in Cancun or the food-focused travels you might have in Portugal.

Instead, it presents a dire vision of urban life, and then offers itself as the antidote. It evokes the Japanese practice of forest bathing, and disconnection, and a little curative isolation. It encourages you to use your tiny, at the rate of just over $160 a night, to finish your novel — because you obviously never have time to work on it otherwise — and insists that you remove yourself from a list of stressors conveniently noted in a Getaway pamphlet. These include: work, email, texts and competition.

We punch in the code and crack open Shirley like a safe and begin to poke around. I plop down on the large, soft platform bed. (“Memory foam?” I announce giddily.) I pore over the copious literature, which informs guests, among other things, that the absence of mirrors is intentional. Because only monsters think about their pores when they’re supposed to be out here like Henry David Thoreau. (Need a reminder? There’s a copy of “Walden” on the bookshelf.)

We scan the kitchen, which comes with two plates, two mugs, a pan and not a single wine glass. And we encounter the wooden box where you really, really, really should lock away your cellphone, source of so much pain and FOMO.

But just in case you can’t part with it, they’ve conveniently provided absolutely no WiFi.

“Idiot,” you think. “This is called camping.”

Not exactly. Now, in tiny houses that no one will acknowledge are honestly just what we used to call cabins, it’s called “escaping.”

Just what are we running from?

For the suburban families that have made “Tiny House Hunters” an HGTV hit, tiny houses are an alternate reality, an incredible stretch of the imagination.

“How could anyone live with so little?” is the obvious question.

The better one: “What must that be like, to not be so in debt that your skin feels like it’s on fire every moment of every waking day?”

Having only recently moved up from a series of 350-square-foot tiny houses called studio apartments, I know what it’s like to live with no doors. Anxiety is worrying that I might live like this forever, or perhaps one day live with even less.

So I can’t dismiss the popular fascination with tiny houses — little wooden temples to minimalism that on average clock in at just over 200 square feet and can be had for about $50,000 — as a misguided fad. Adorable wooden cottages on wheels have exploded in popularity not because people wanted to downsize, but because they were downsized.

We struggle “our whole lives to work hard enough so we can relax,” says Amy Turnbull, president of the American Tiny House Association, a relatively recent creation (founded in 2015) with 400 members nationwide. “What has changed is that millennials and the housing crisis of 2008 have shown us we ain’t got time for that. Security is a myth. Housing is beyond the reach of many. We have student loan debt. So, what’s the point?”

It’s no wonder that the tiny house, off the grid in fact and in spirit, appeals.

“Initially people were like, that’s so cute, I want one,” Turnbull says. But the tiny house movement has been mired in municipal wrangling and shunned by communities that won’t abide what ultimately are temporary homes. In many areas, they are illegal, she says.

And so “you can’t live in them full time,” Turnbull says with some exasperation. “That’s the problem.”

But Getaway, and other tiny house rentals, such as Caravan in Portland, Ore., or Austin’s Tiny Homes Hotel, can give you a taste of the tiny-house life.

In an early marketing video, one of Getaway’s founders spoke of tiny houses as yet another millennial reaction to their parents’ whole lives. “The form is wrong, the function is wrong,” chief executive Jon Staff intoned as a camera panned over beige dream homes in some nameless suburbia.

Millennials have been blamed for the death of really important American institutions, like paper napkins and J. Crew and promiscuity.

But what if we’ve got it all wrong? What if it’s the American institutions that are secretly killing millennials, or at least filling them with an existential dread that quietly eats away at their insides like acid reflux?

“You can make a case that millennials are stressed out. They feel stressed out by their phones,” says Jean M. Twenge, a psychologist who studies generational differences and is the author of “Generation Me.”

If their parents’ little boxes are another institution that has to go, maybe, Getaway seems to posit, the answer is a littler box. Maybe the answer is in “Walden.”

“The irony here is that what Thoreau did was move to Walden Pond to get away from society. Arguably, life in a village at that time and life at Walden Pond wasn’t that different,” Twenge notes. “Compare that to life with a phone in modern times.”

It’s ridiculous, but I expect to feel some instant woodsiness that never materializes. Even though I play Bon Iver on the Bluetooth radio, and then take the provided torch outside to our fire pit and sprinkle the (provided) firestarter over the (provided) logs, and light our first campfire and make some (provided) s’mores.

Instead, we sit outside and poke at our baby fire, which is as formidable as a burning candle, and drink wine until it begins to rain.

CHICAGO — A suburban Chicago woman who has crusaded against gambling for decades has won $25,000 by playing a sweepstakes game at a gambling cafe.